Earlier this month, we took a look at December celebrations in the Outside Lands. Now let’s take a look at holiday celebrations and traditions across the rest of San Francisco. 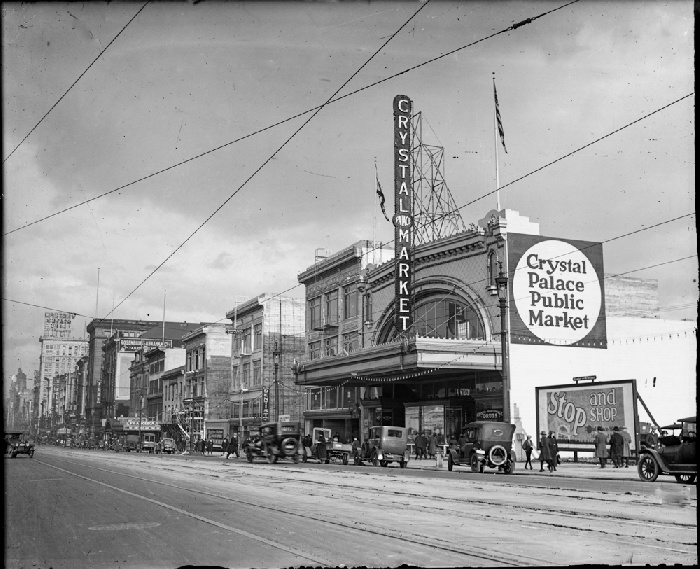 The Crystal Palace Market contained numerous individual retail businesses, all operating under one roof at the corner of 8th & Market Streets from the early 1920s until the late 1950s. These included delicatessens, grocery vendors, lunch counters, meat and poultry sales, housewares, notions, holiday decorations, gourmet foods, and more—which drew thousands of daily shoppers into the cavernous space. The building was demolished and replaced by a Del Webb’s Town House motor hotel circa 1959-60—and that was converted to apartments in the 1980s. More recently, Trinity SF demolished the Del Webb structures and developed a massive new high-rise apartment complex on the site. Read more about the Crystal Palace Market. 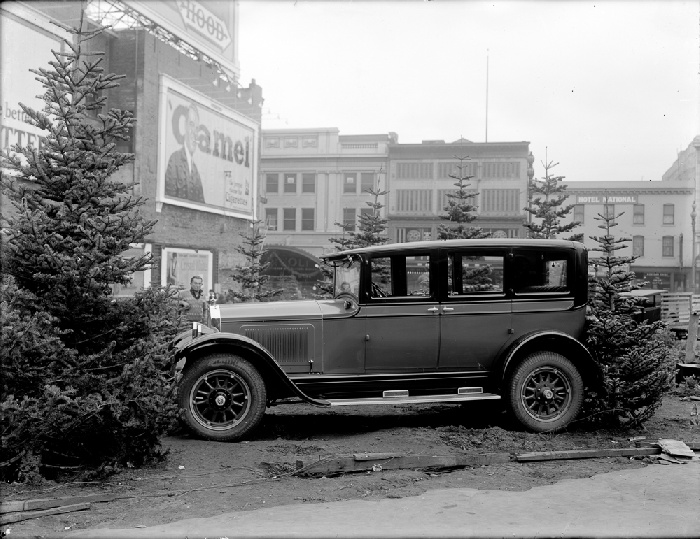 Christmas tree lot and auto on south side of Market between 7th and 8th Streets on what is now the side of U.N. Plaza, circa 1925. (wnp15.891; Courtesy of a Private Collector)

Buying a tree and getting it home in the car presented challenges in the days when real trees were the standard choice, long before dismantled artificial trees began to be delivered in boxes. This lot was located on Market Street between Seventh and Eighth Streets in 1925. 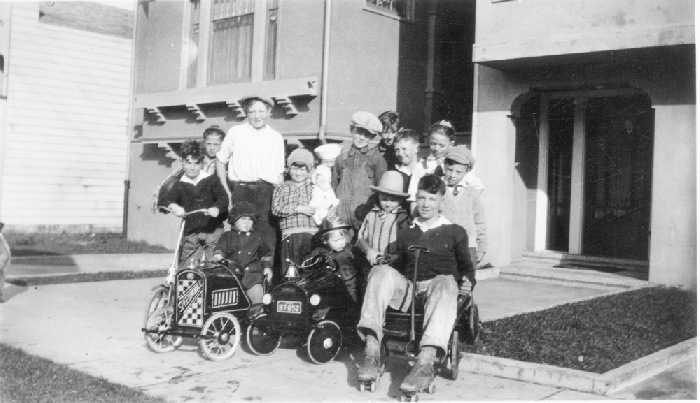 Kids showing off Christmas toys, probably on the 800 block of Lisbon Street, December 1927. (wnp27.4193; Courtesy of a Private Collector)

Displaying gifts among neighborhood playmates has long been a regular part of Christmas Day. Here, a group of youngsters from Lisbon Street in the Excelsior proudly shows off a variety of dolls, cowboy hats, wagons, bicycles, and toy cars in 1927. 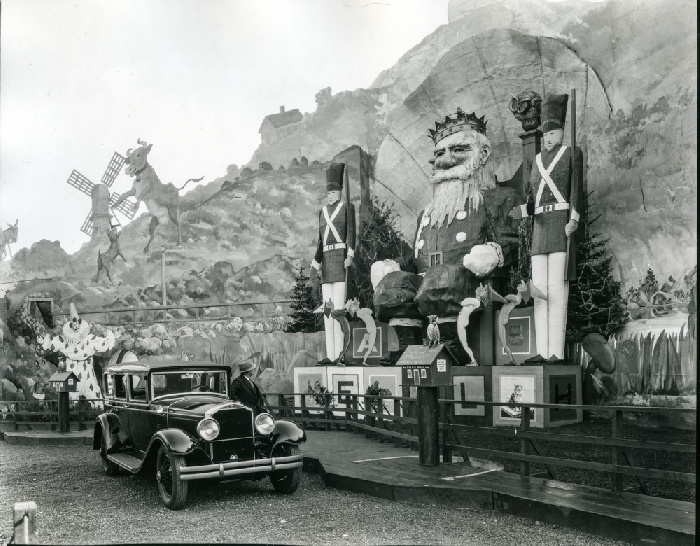 As the automobile grew in popularity, San Francisco gas stations began adding their own holiday décor to the scene. Read John Freeman’s article about one such location. 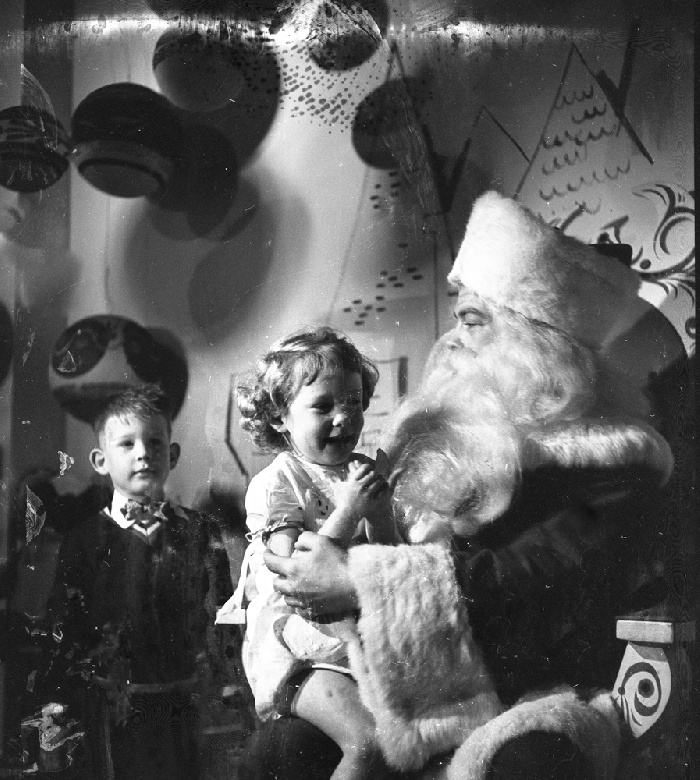 Department store Santas have been drawing crowds for generations, with the first one reportedly appearing in a Massachusetts store in 1890. This scene shows excited youngsters from 1950. 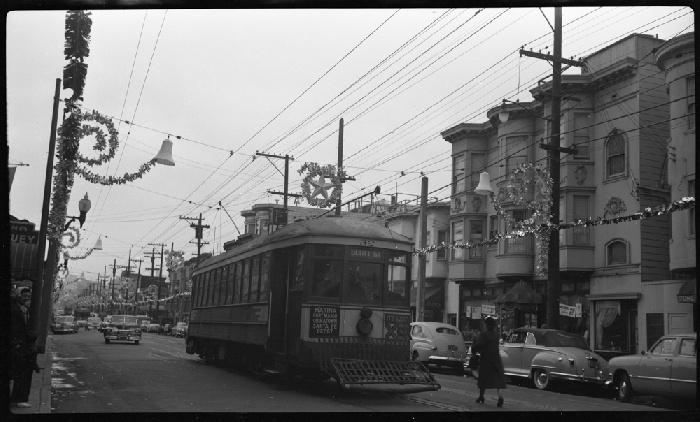 F-Line streetcar at Chestnut and Scott terminus with Christmas decorations on street, 1950. (wnp28.1687; Courtesy of a Private Collector)

Neighborhood merchants from the Marina District decked the area with garland, bells, and stars during the closing days of streetcar service along Chestnut Street, circa 1950. 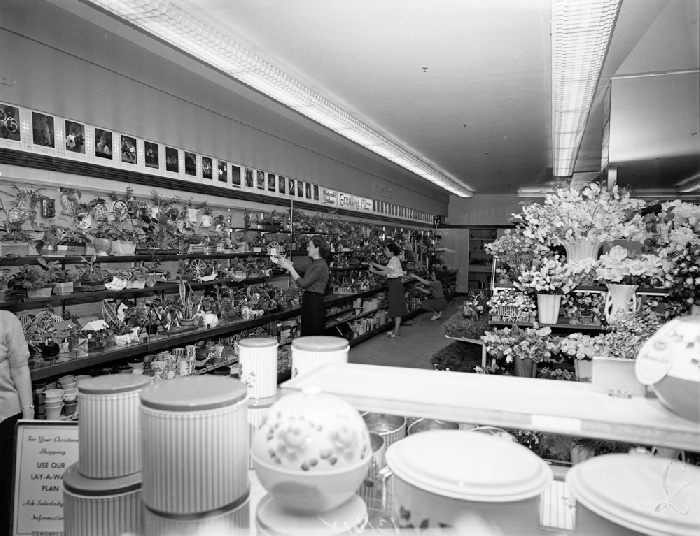 The new Woolworth store, occupying the Main Floor and the Basement of the Flood Building at Powell & Market was well-stocked with a wide variety of goods when it first opened for business just prior to Christmas of 1952. 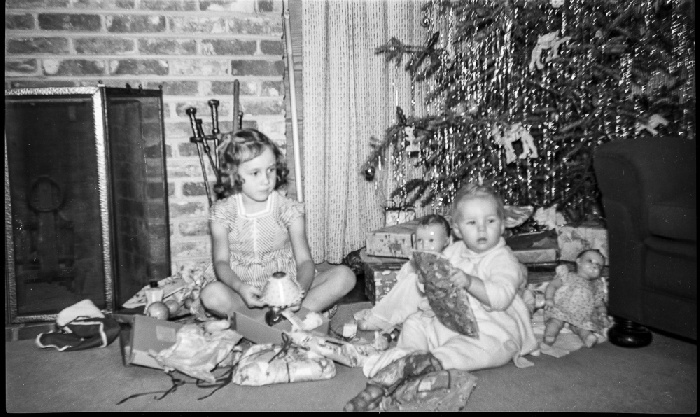 Children in the Little Hollywood neighborhood open Christmas presents in the 1950s. 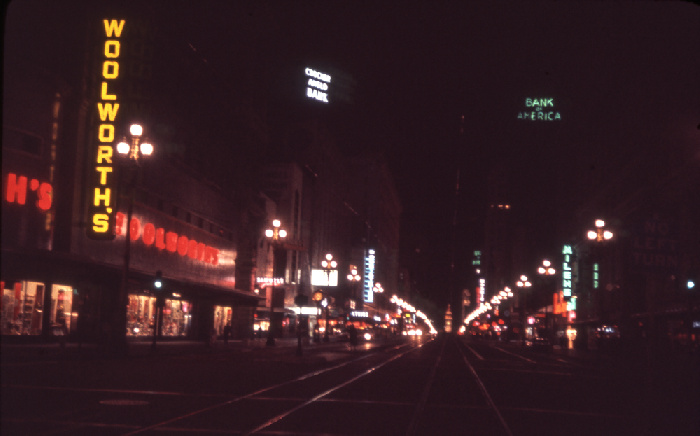 Numerous stores on Market Street between Fourth and Fifth Streets remained open late for holiday shopping in December of 1961, including the Emporium, Hale Brothers, and J.C. Penney (all out of sight at right), plus Woolworth, Samuel’s Jewelers, Sommer & Kauffman Shoes, Milen’s, Lerner Shops, Roos-Atkins, and more. 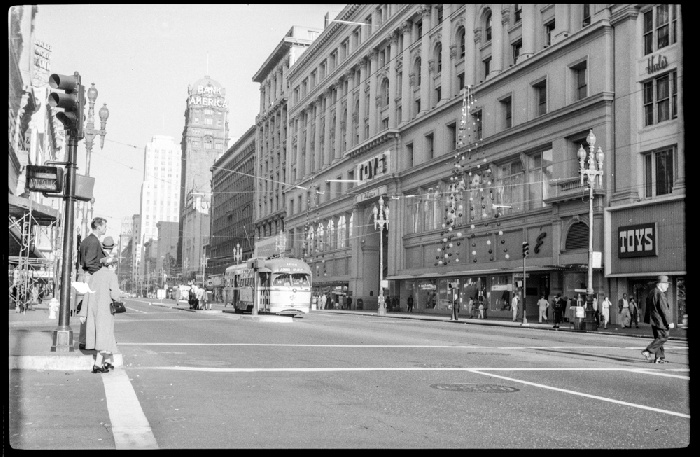 View east on Market Street at Powell with Emporum at right, 1964. (wnp14.4872; Courtesy of a Private Collector)

Both the Emporium and the adjacent Hale Brothers stores posted temporary signs boldly announcing the word TOYS as a reminder to holiday shoppers in 1964. A visit to Santa and to the Emporium’s spectacular Toy Department at the back of that store’s Fourth Floor, plus the carnival-like Roof Rides was a day’s adventure for many families in that era. The sparse crowds suggest an early morning scene. 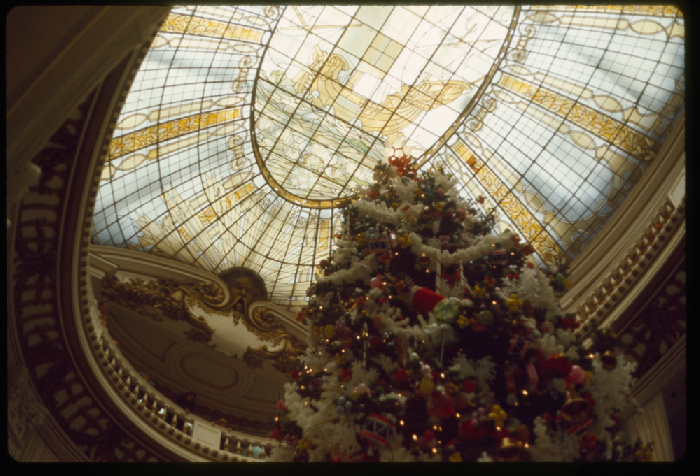 From the World War I era, a massive 40-foot Christmas tree dominated the City of Paris store beneath the stained-glass dome from post-Thanksgiving through early January. Shown here in 1974 when the old building was known as “City of Paris by Liberty House” before Liberty House opened its own new building at the NE corner of Stockton & O’Farrell Streets that fall, the tree was a must-see for many San Franciscans each year. This marked the final year of the “City of Paris” tree—though Neiman-Marcus, which saved the dome and installed it on a new building in 1980, still has an annual tree under the restored dome. Read more about the City of Paris.

Since 1975, the Bill Graham Menorah Project has sponsored a public display of a lighted Hanukkah menorah in Union Square, complete with a nightly lighting ceremony. See a collection of the project’s historic images. 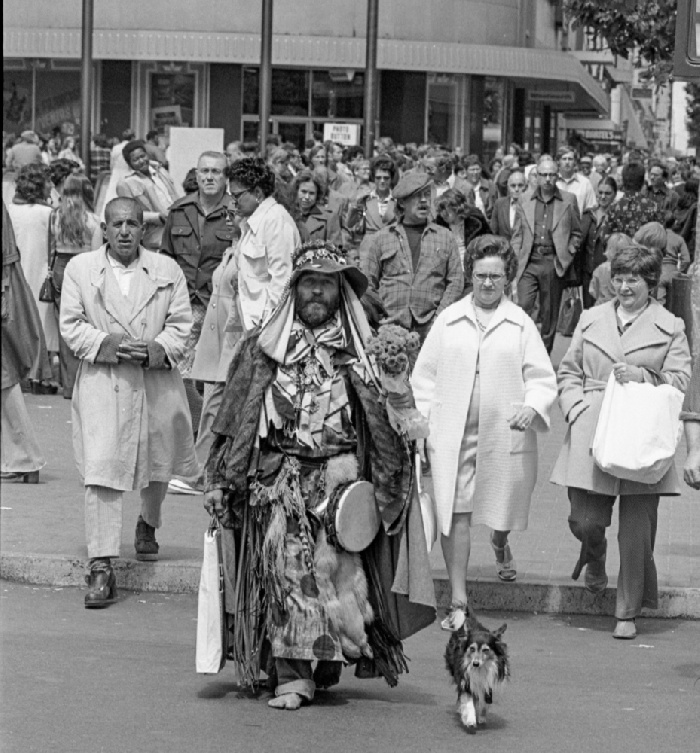 The holidays result in a lot of shopping for presents. Here, shoppers fill the Market Street sidewalk at Powell Street in 1976.