As families and friends gather for Thanksgiving, we take a look back at some of the many reminders of vintage holiday celebrations contained in the OSFH archives. 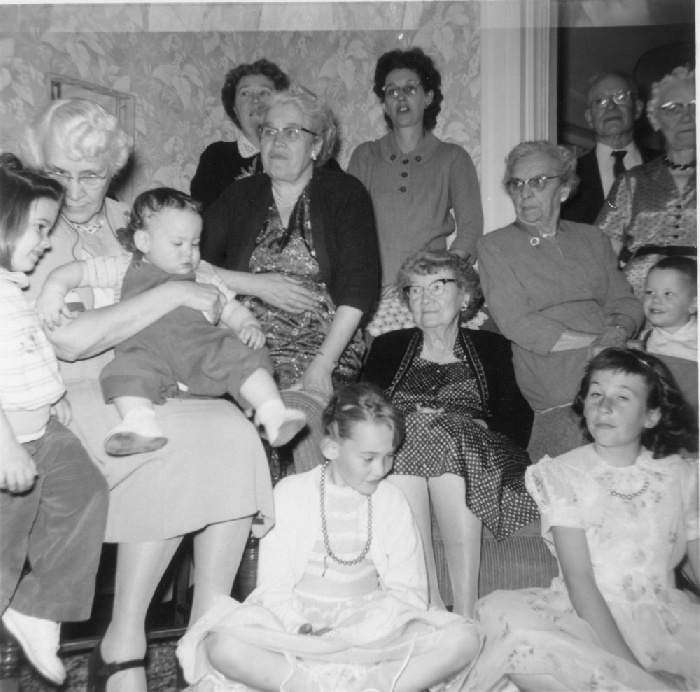 Group of adults and children posting inside residence, 1950s. (wnp27.7368; Courtesy of a Private Collector)

Most of us grew up in San Francisco with many relatives and family friends living nearby. Grandparents often had numerous siblings, in-laws, cousins, and decades-long friends who might be part of the family’s Thanksgiving celebrations. Meals like this were the perfect setting for kids to learn the meaning of “2nd-cousin-once-removed” by linking names and faces to otherwise vague genealogical titles.

My own grandmother, who hosted our 1960’s Thanksgiving dinners, was a long-time resident of the Mission District and there was no supermarket shopping for her at holiday time—she visited many different stores in order to select just the right products for her Thanksgiving table.

Root vegetables played a big part in the meal, and she often liked to visit the Alemany Farmers Market where she could inspect each carrot, potato, yam, and onion before making a final selection. Sometimes she did not like what she saw there, and would then visit smaller neighborhood produce markets for certain items. 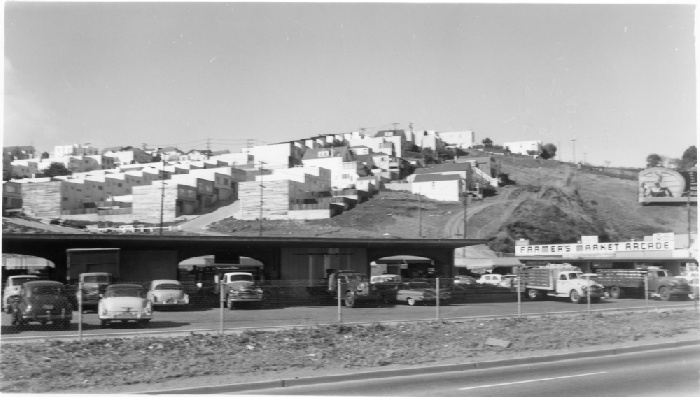 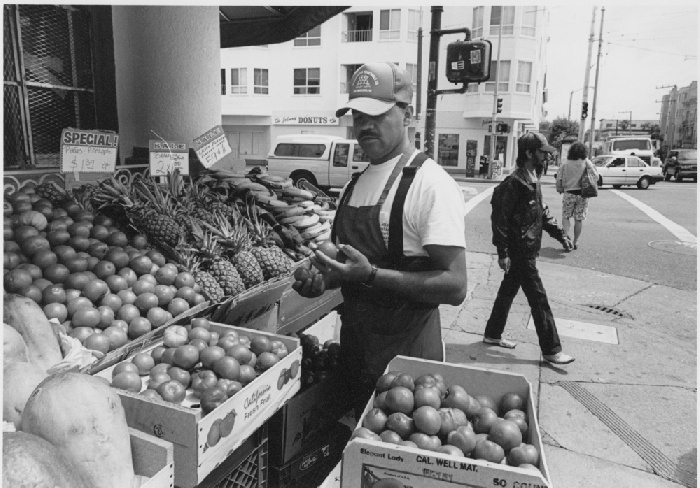 The turkey invariably came from the legendary New Mission Market where Grandma could chat with her favorite butcher and obtain the largest possible turkey that would fit into her roasting pan and oven—22 pounds would fit perfectly—23 pounds, maybe, depending on the shape—24 pounds—NOT. As late as the 1950s, the store still employed “pluckers” who would remove the feathers from freshly slaughtered poultry in a back room, and then singe the tiny “pin feathers” with an open flame so that the bird would be ready for the store’s most persnickety customers. 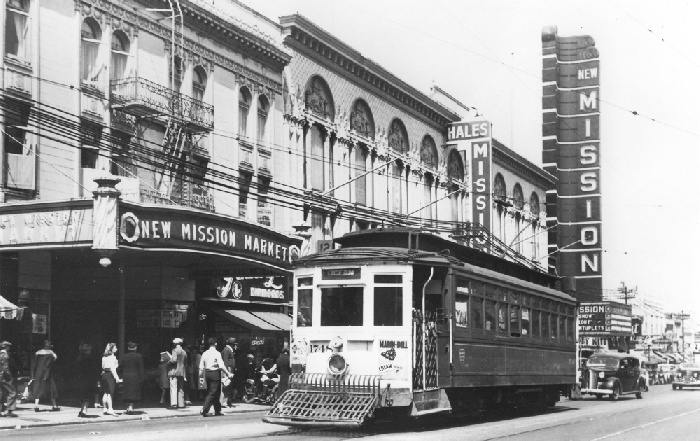 In the days before chain supermarkets, many Thanksgiving turkeys came from poultry-only shops such as the long-gone Royal Poultry that once shared a building with the local Bank of America branch on Mission Street near Geneva Avenue. 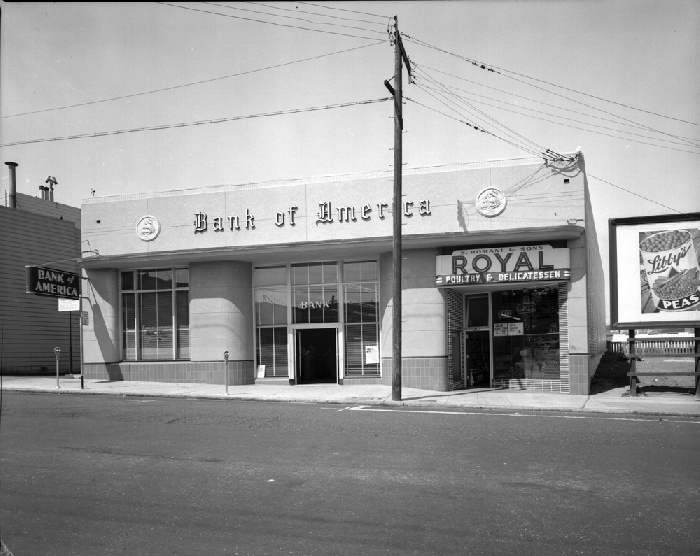 Living on Capp Street for several decades before moving to the Outer Mission, Grandma would be up and down 24th Street for many additional dinner items—wine and liquor at stores like the Kitchen Cupboard, day-old bread for her stuffing at Mrs. Bigg’s Bakery, and perhaps some Pepto-Bismol for over-indulging guests from Murphy’s Pharmacy. 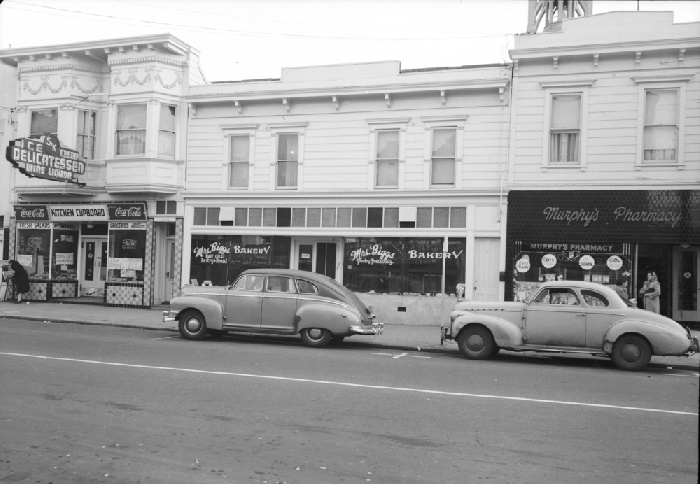 For many families, though, it’s just not Thanksgiving without fresh crab from Fishermen’s Wharf, though recent news reports in late October of 2022 state that the opening of the Dungeness crab season will be delayed for the fourth year in a row—meaning that crab will not be available again this year for Bay Area Thanksgiving tables. Perhaps a side trip to Liguria Bakery in North Beach for focaccia will help to fill this culinary gap. See mouth-watering Liguria images. 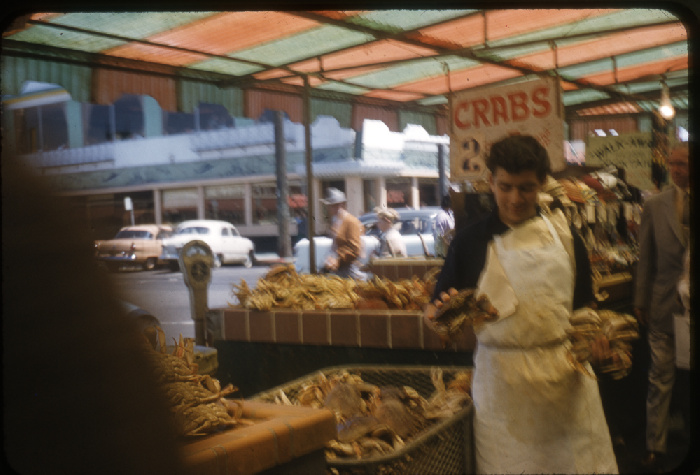 Like many families in the 1950s, Jell-O salads were a typical start to our Thanksgiving meal. We went though some odd choices for a while—lime green Jell-O made with canned fruit cocktail was present for several years—to decidedly mixed reviews. Finally, in 1967, the St. Cecilia Parish cookbook printed a recipe for Mandarin Orange Salad (canned Mandarin oranges in a mixture of orange Jell-O and softened orange sherbet), which has been our family’s standard Thanksgiving salad for 55 years now.

Grandma always insisted on a colorful mix of foods on each plate—light and dark turkey meat with a rich brown gravy, mashed russet potatoes plus orange sweet potatoes, a dark green vegetable, a corn dish, deep red cranberry sauce (both whole berry and jellied—our family had die-hard fans for each type), plus golden-brown rolls and fresh butter. One year, to prevent squabbling at the table, Grandma purchased and cooked an additional dozen turkey drumsticks, thus keeping everyone happy, though the platter looked like a chorus line of Radio City Music Hall Rockettes in the middle of the table. The cranberry sauce was always served in an antique crystal dish that appeared only once a year and was never used for anything else.

There were always three choices of pie—apple, pumpkin, and mincemeat. The whipped cream for the pumpkin pie was always freshly made, and Grandma supervised the precise amounts of sugar and vanilla, with the eye of a chemist, as well as the beating time so that the whole thing was NOT churned into butter—a culinary mishap that used to occur occasionally when she was not watching closely enough.

Only when the meal was plated and everyone served, would Grandma sit down and relax, still wearing her apron—confident that all was well and grateful that her family was together for yet another year. 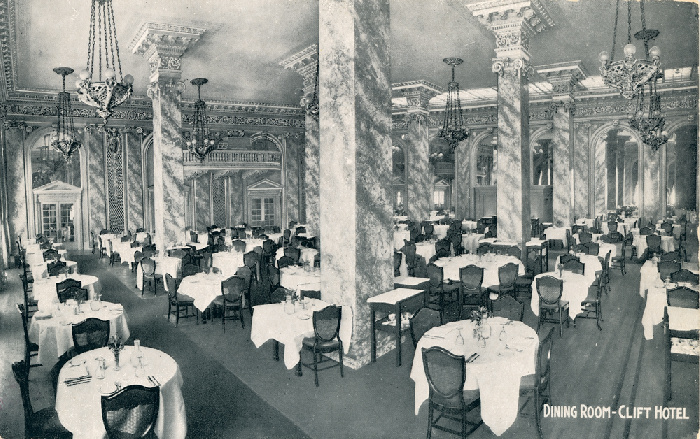 Regardless of where the celebration takes place—at someone’s home, in a restaurant, or communal dining amongst the warm camaraderie of others who might be working on the holiday, Thanksgiving is the time for all of us to express our gratitude for having come through another year. 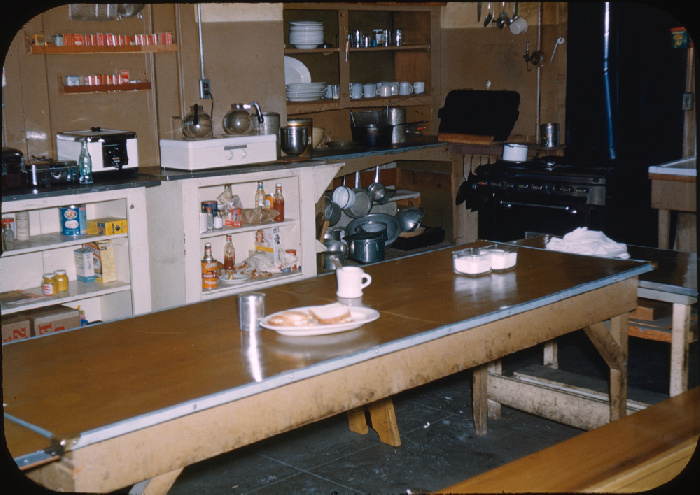 A few weeks ago, we did a podcast on the Alvord Lake and Bridge and it got us to thinking about all the bridges and tunnels in Golden Gate Park over the years. Some are gone, but others are still around. So with apologies to The Bridges of Madison County, here is our OpenSFHistory Top Ten look at the Bridges (and Tunnels) of Golden Gate Park. 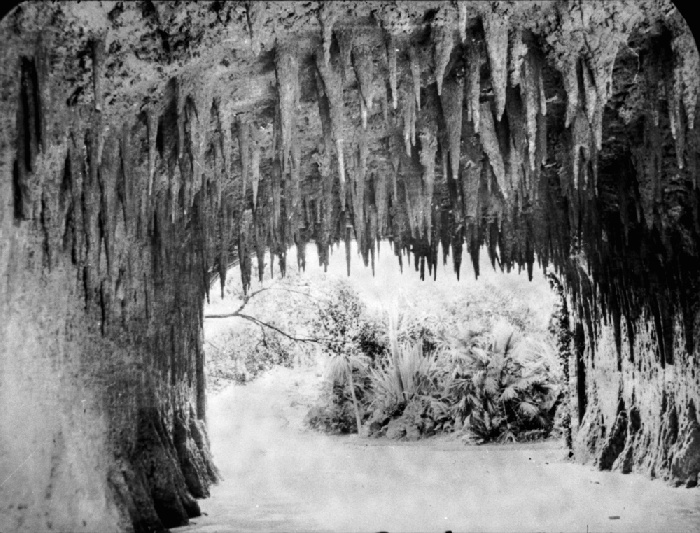 Let’s start with the Podcast subject, the Alvord Lake Bridge, originally just called the Tunnel during construction. It was built in 1889 because of concerns about people crossing over the drive (now Kezar Drive) between Alvord Lake and the Children’s Quarters in Sharon Meadow. The unique concrete stalactites are the design of bridge designer Ernest Ransome. The bridge was built using Ransome’s patented reinforced concrete system and was the first reinforced concrete bridge built in the United States. It is now an Historic Civil Engineering Landmark by the American Society of Civil Engineers. 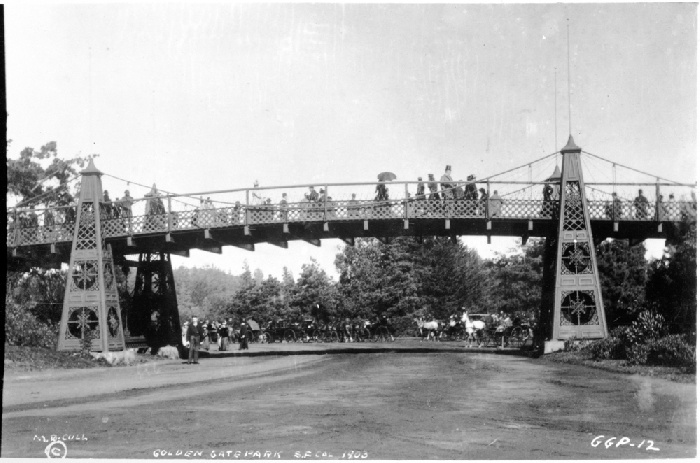 A few years after the Alvord Lake Bridge was built, another bridge was built over Middle Drive (now Nancy Pelosi Drive) for the same reason. Completed in February 1892, it was designed to provide safety for pedestrians from the horse-drawn carriages using Middle Drive. It was constructed of iron and was 140 feet long. Sadly, it no longer exists today, having been demolished in July 1928. 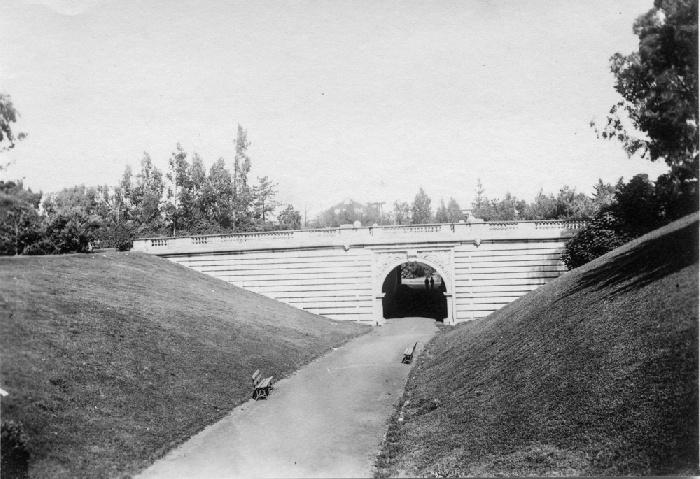 Running under Main Drive (now JFK Drive) near the 10th Avenue entrance to the Park, this tunnel serves the same purpose as the bridges, to provide safety to the pedestrians crossing Main Drive. It provides access to the Music Concourse area and is still in use today. Just to the west of it, there is another tunnel under JFK Drive which provides access to the parking garage under the Music Concourse at 10th Avenue. Further east, there is a similar similar tunnel under Main/JFK Drive by the Conservatory of Flowers. 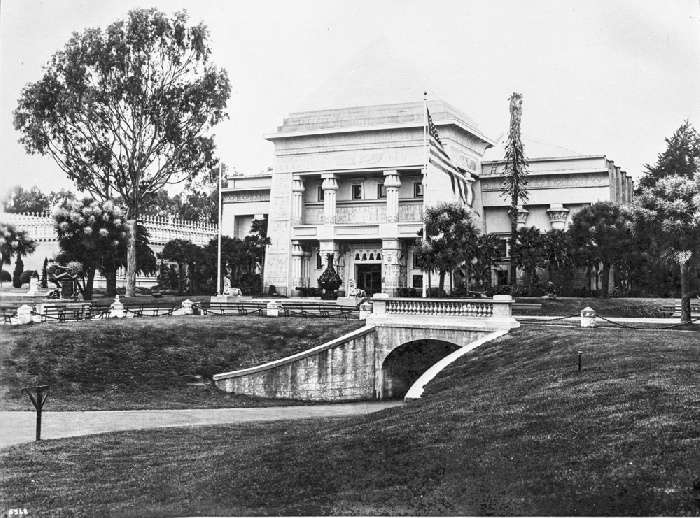 If you walk south from the tunnel under Main/JFK Drive, you will quickly get to the pedestrian tunnel under the north end of the Music Concourse. It is seen here in 1918 with the Memorial Museum behind it. The Memorial Museum would soon get rebuilt and renamed the de Young Museum. There is a matching pedestrian tunnel on the other side of the Music Concourse from here by the Academy of Sciences. 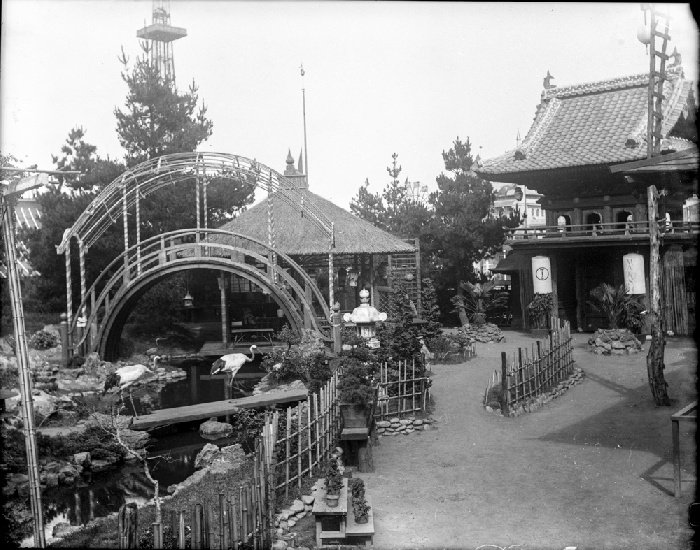 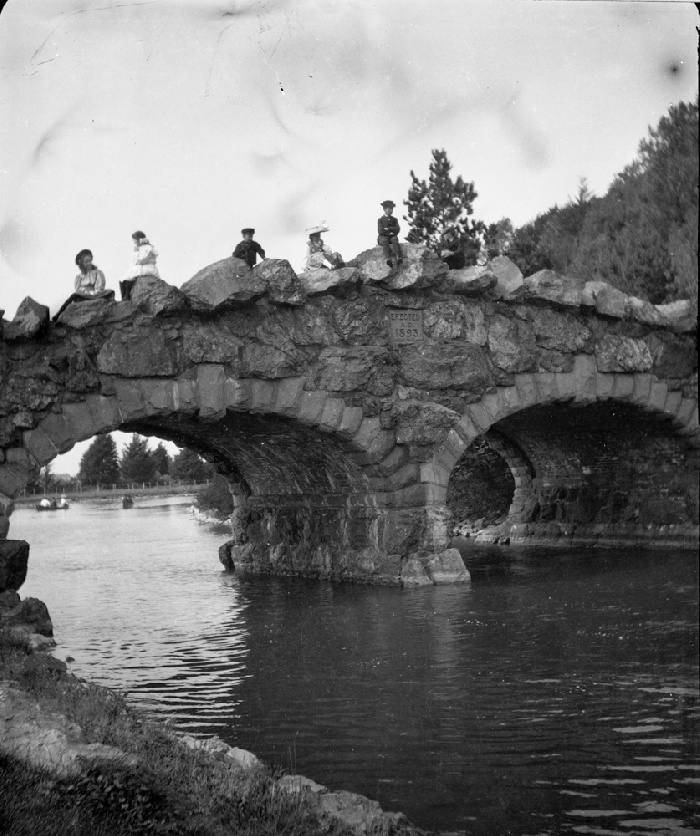 Like the Japanese Village, Stow Lake to its west was created for the 1894 Midwinter Fair. The manmade lake was built around Strawberry Hill, so they needed bridges to provide access to the hill, atop which Sweeny Observatory had been built. On the south side of Stow Lake, they built the Rustic Bridge out of boulders from the local tough sedimentary rock called chert. On the north side of the lake, there is another, far more plain-looking, bridge to Strawberry Hill called the Roman Bridge. 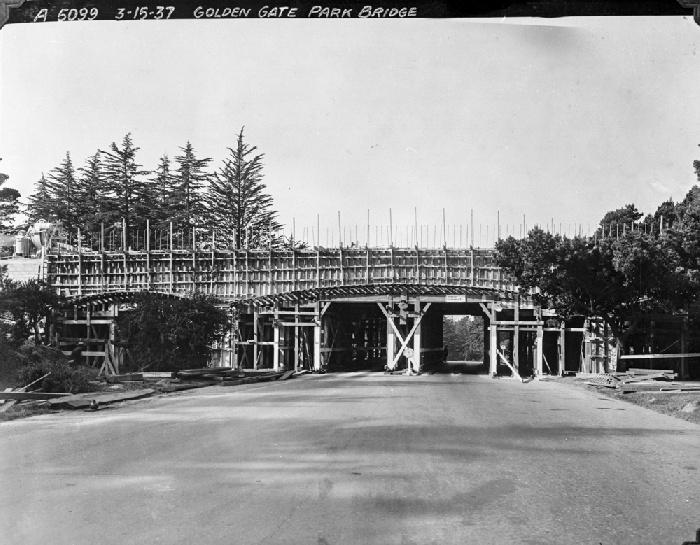 With construction of the Golden Gate Bridge nearing completion, access to it was being worked on. One of those avenues was from the south on 19th Avenue, through Golden Gate Park to Park-Presidio. So Crossover Drive in the Park was constructed. To avoid having cross-traffic at Main/JFK Drive, they built this bridge, seen under construction in March 1937. 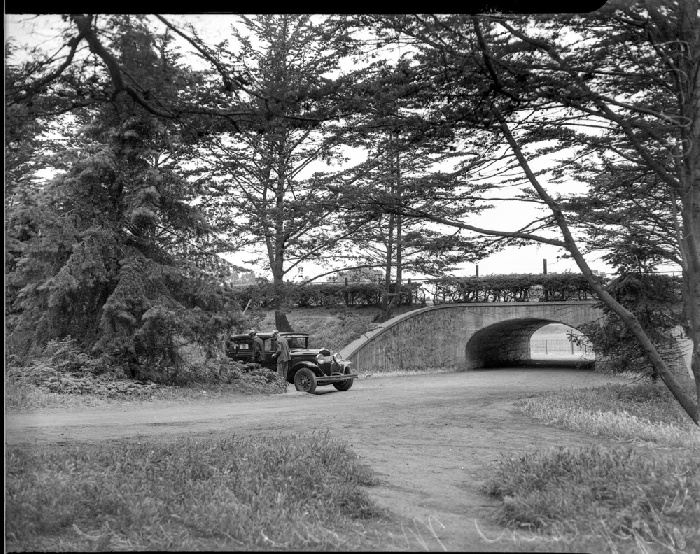 Further west in the Park is the Polo Fields. There is a track around the top of the stadium providing access to the bleachers from above. However, there are two tunnel entrances–one on the north side, one on the south side–which provide access directly to the lower track and field. This image of the south tunnel was taken after a grisly murder occurred in the tunnel on May 13, 1934. 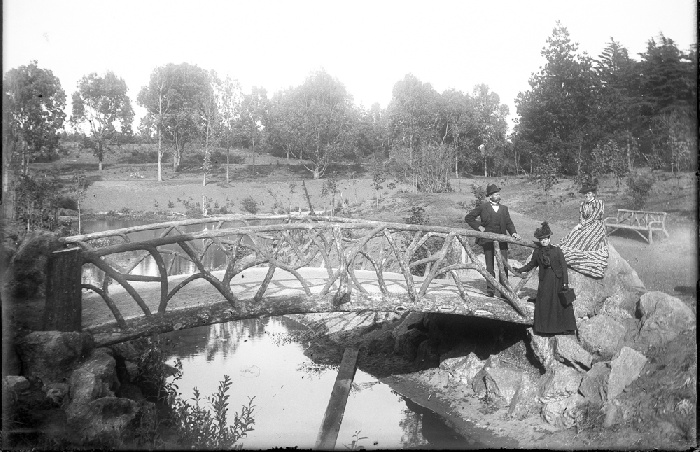 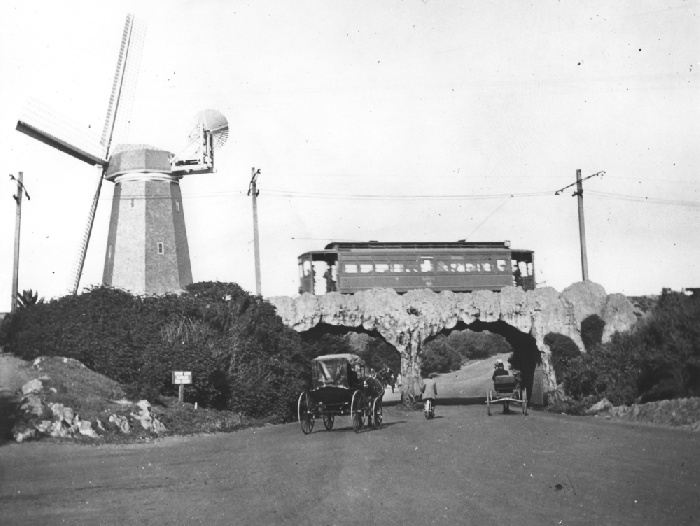 During our Alvord Lake and Bridge Podcast, we told you how the naming of that lake led to a steam train right-of-way–later a streetcar line–across the west side of Golden Gate Park. That right-of-way included this rustic bridge over South Drive, now MLK, Jr. Drive. That bridge was demolished after the streetcar line was discontinued.

That’s our OpenSFHistory Top Ten look at the bridges and tunnels of Golden Gate Park. You’ll notice that we snuck in links to a few more than these ten. And we didn’t even get to the pedestrian tunnel under the Great Highway between the Beach Chalet area of the Park and Ocean Beach that has since been closed off. There are also a number of other very small pedestrian bridges over waterways in the Japanese Tea Garden and the Botanical Garden. How many of these bridges have you walked over or tunnels that you’ve walked through?