In recent decades—and especially since the onset of Covid in early 2020—parades have fallen into a state of decline, compared to years past. San Francisco’s “Big 4”—Pride, Chinese New Year, St. Patrick’s Day, and Italian Heritage (formerly called Columbus Day) Parades still draw big crowds, but going through the OSFH Archives, we can see numerous images of many other festive gatherings that were also huge, well-attended events, year in and year out. Here are some memorable examples of San Franciscans turning out for parades over the last 100 years or so. 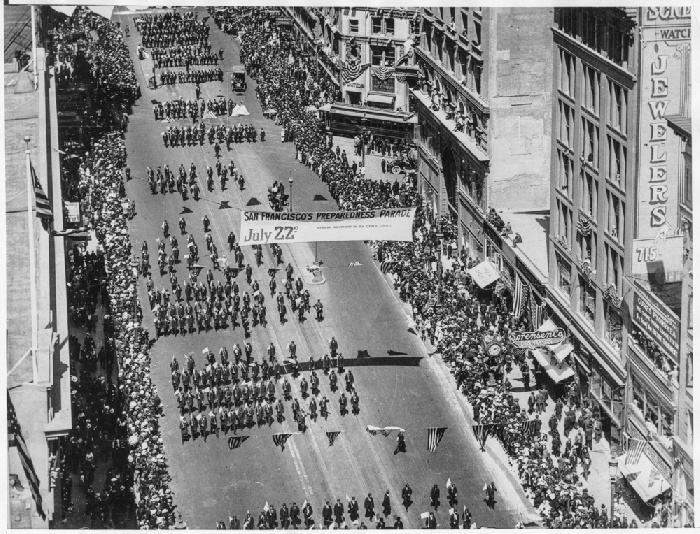 Preparedness Day events were held in many U.S. cities between May and July of 1916 in order to show America’s readiness for what became this country’s eventual (1917) involvement in the European conflict that began in 1914. With more than 50,000 marchers, the Preparedness Day Parade was believed to be San Francisco’s largest such event at that time. Sadly, there was a bombing as the parade was passing near the corner of Market & Steuart Streets, killing 10 persons and injuring 40 more. Read the details here. 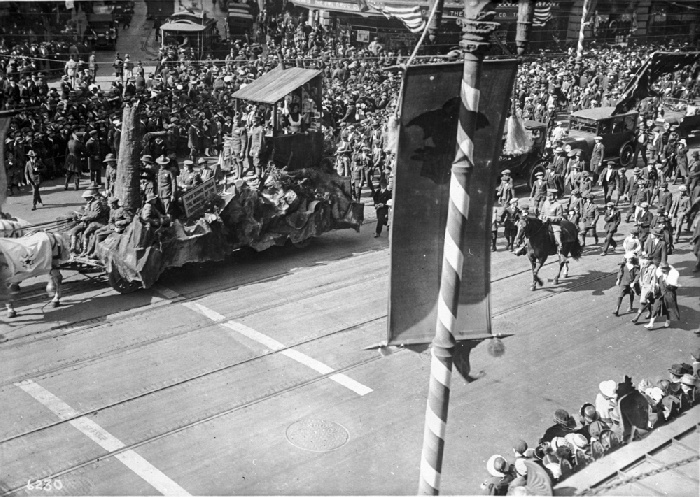 War Women’s Day Parade on September 2, 1919 celebrated the contributions of women volunteers in World War I. The day wrapped up with an elaborate event at the Exposition Auditorium (later, Civic Auditorium and today, Bill Graham Civic Auditorium). Read more in this San Francisco Call article. 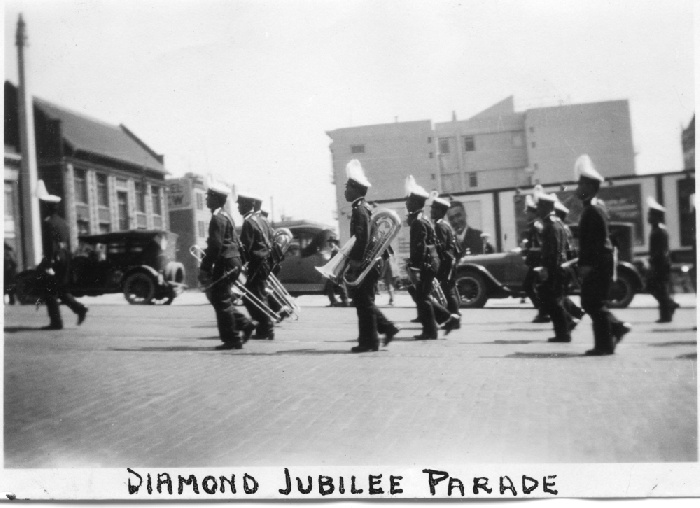 The Diamond Jubilee Parade marked Admission Day of 1925—a full 75 years since California’s admission to the Union as a new state on September 9, 1850. 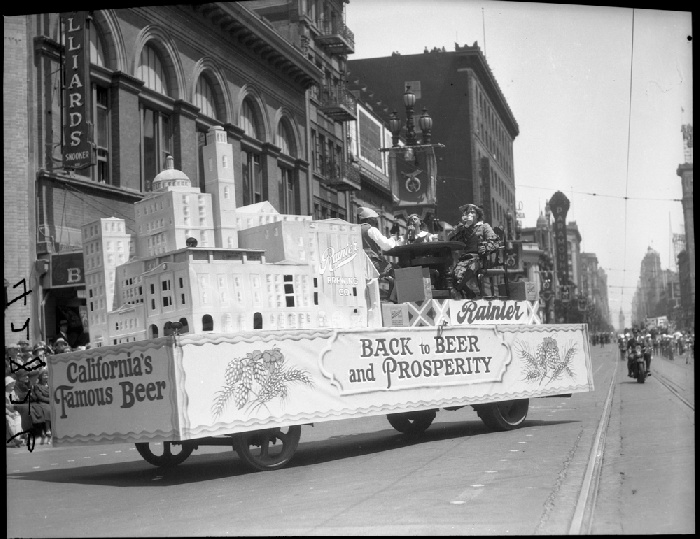 This float in the 1932 Shrine Parade advocated for passage of the 21st Amendment to repeal the 18th Amendment which had taken effect in January of 2020. Prohibition was officially repealed on December 5, 1933. 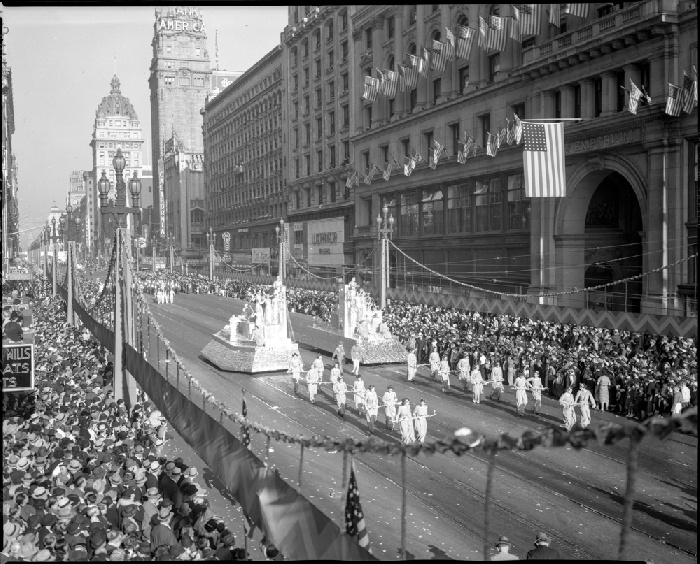 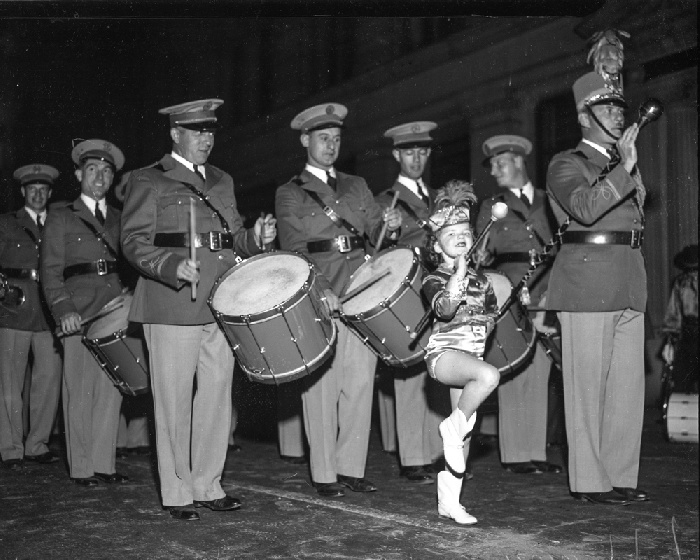 For decades, San Franciscans celebrated Armistice Day, marking the end of the First World War on November 11, 1918. This image, featuring a proud majorette, is from the 1940 event. 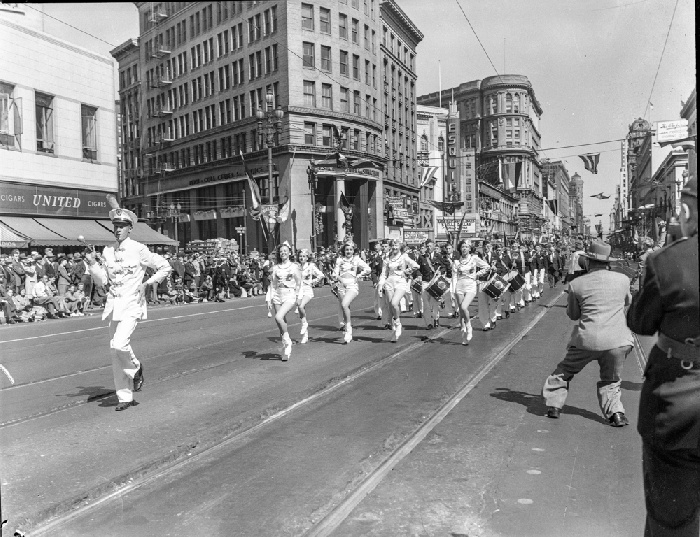 Post-World War II American Legion Parade on Market Street in 1946. The Pix, Esquire, and TeleNews Theatres on the left side of the street, plus the adjacent low-slung Douglas Building were all demolished in the late 1960s to make way for Hallidie Plaza and BART/MUNI’s Powell Street Station. 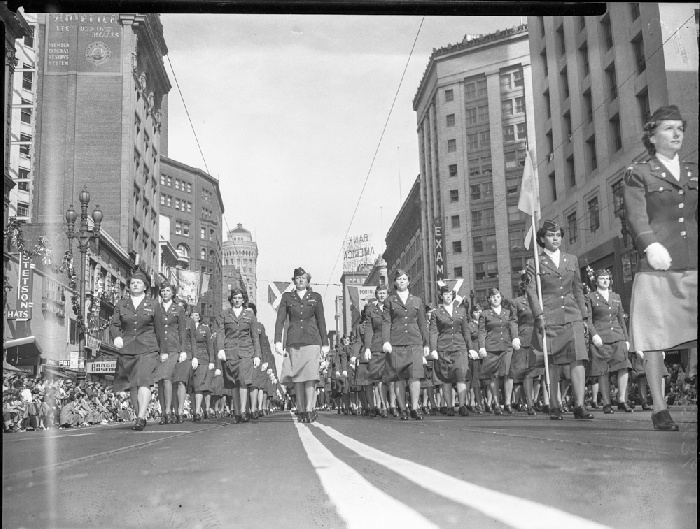 San Francisco’s Portola Festival was a civic event first held in 1909 to celebrate the City’s recovery from the events of 1906. The Womens Army Corps is shown marching here in the 1948 event. Currently, the name Portola Festival name is being used for a music event scheduled at Pier 80. 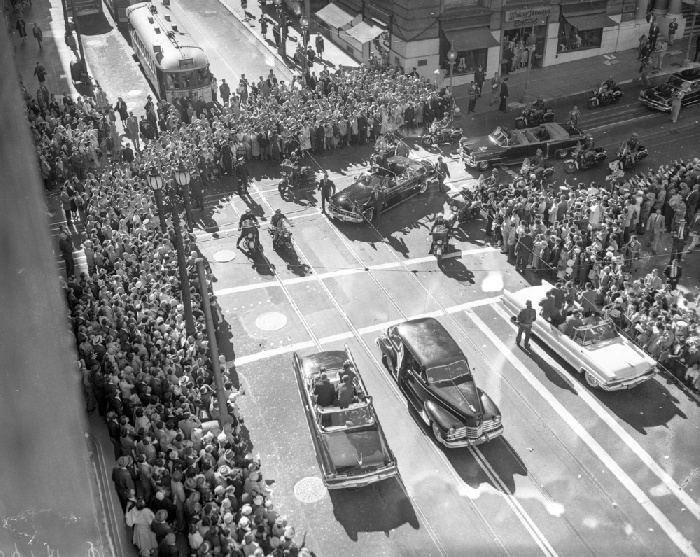 President Dwight Eisenhower, who was seeking his party’s nomination for a 2nd term in the White House, visited San Francisco during the 1956 Republican National Convention then being held at the Cow Palace. 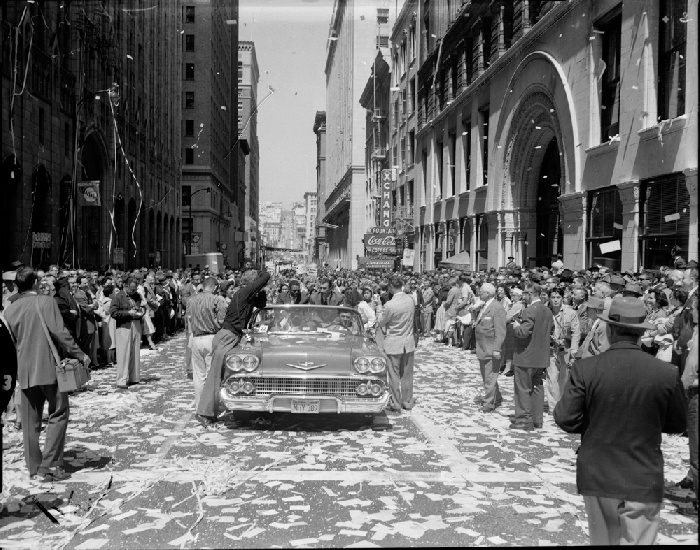 A well-attended ticker-tape parade along Montgomery Street in April of 1958 welcomed Willie Mays and the San Francisco Giants to town from their former home in New York City. 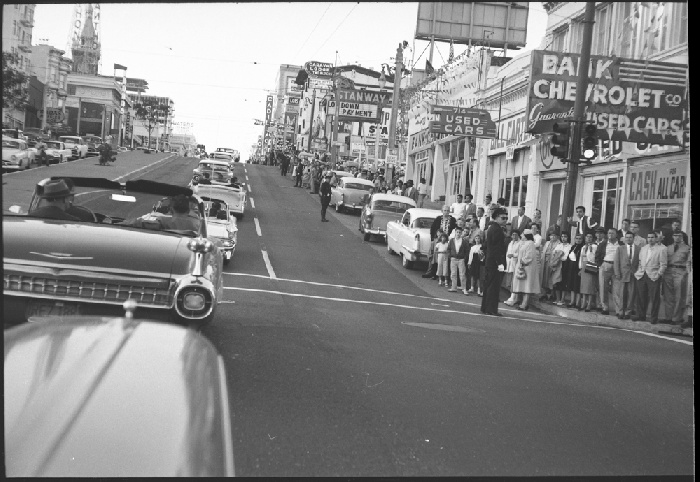 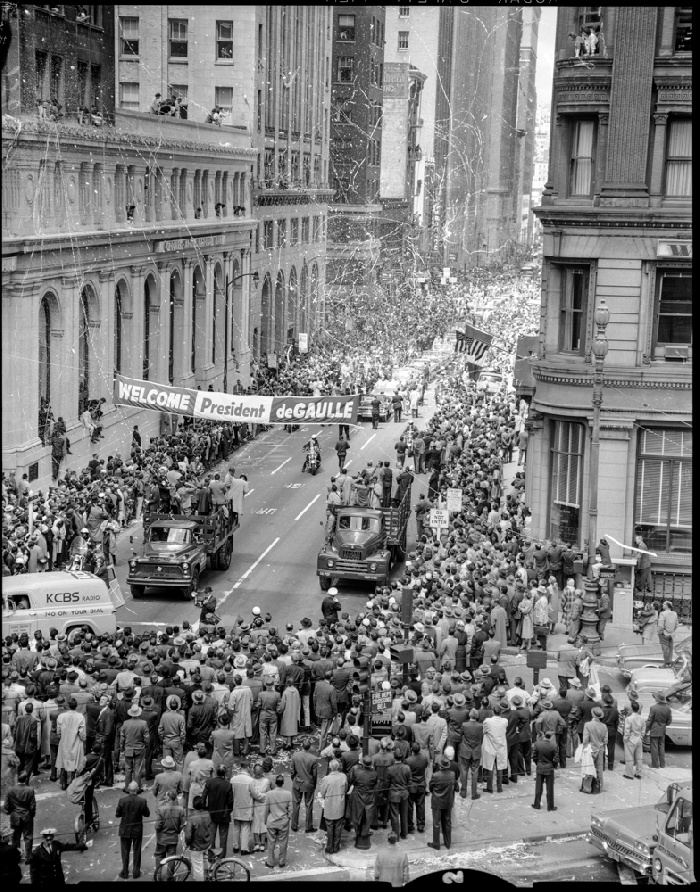 Not to be outdone by the Soviet Premier, French President and World War II General Charles de Gaulle visited San Francisco several months later in 1960. He was greeted by thousands of people, including large numbers of school children—including the entire student body from the French-speaking school, Notre Dame de Victoires. 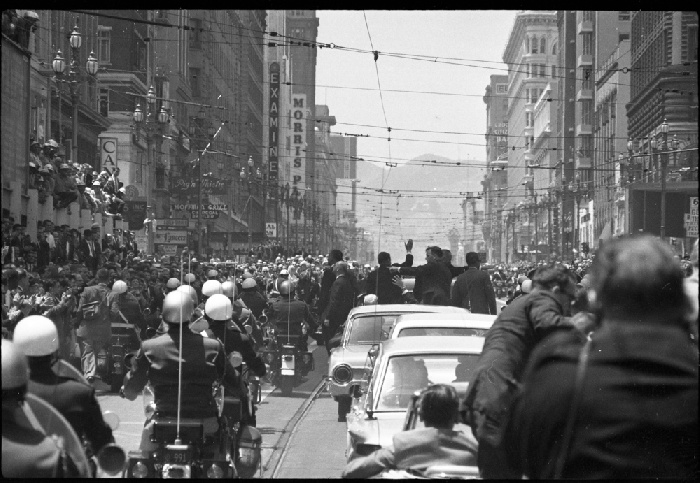 Running for a full term in the White House, President Lyndon Johnson campaigned in San Francisco ahead of the 1964 Democratic National Convention that was held in Atlantic City later that summer. 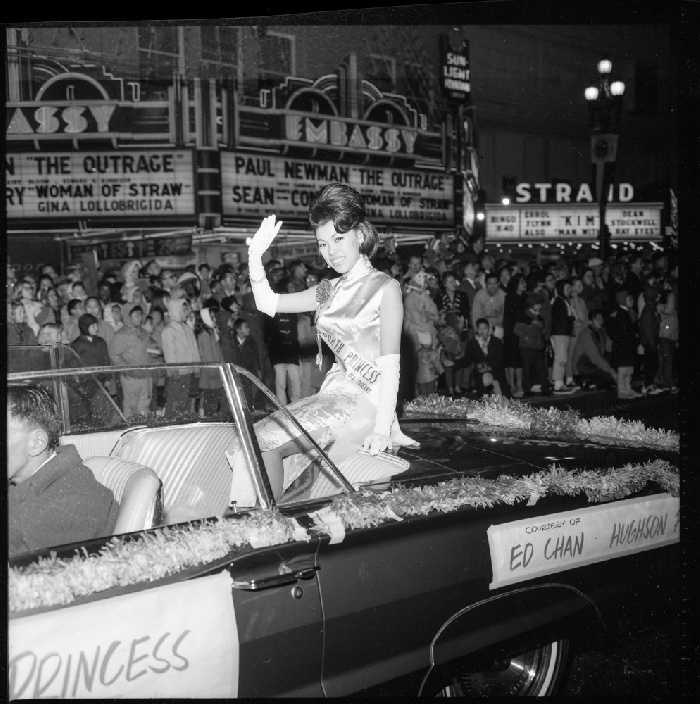 The Chinese New Year Parade of 1965 was still being held on Market Street in the years prior to BART construction. First held as a private event in Chinatown in the Gold Rush era of the early 1850s, it was expanded considerably to the entire community by 1953. The Embassy and the Strand Theatres, shown in the background, were located in the 1100 block of Market Street—an area that has changed considerably over the years. The Embassy was severely damaged in the 1989 Loma Prieta earthquake and was abandoned before being torn down in 1994. The adjacent Strand fell into disrepair before it was shut down by City officials in 2003. It was subsequently rehabbed into a performing arts space by 2015 and is now being used for live performances by the American Conservatory Theater. Read more about Chinese New Year in San Francisco over the years. 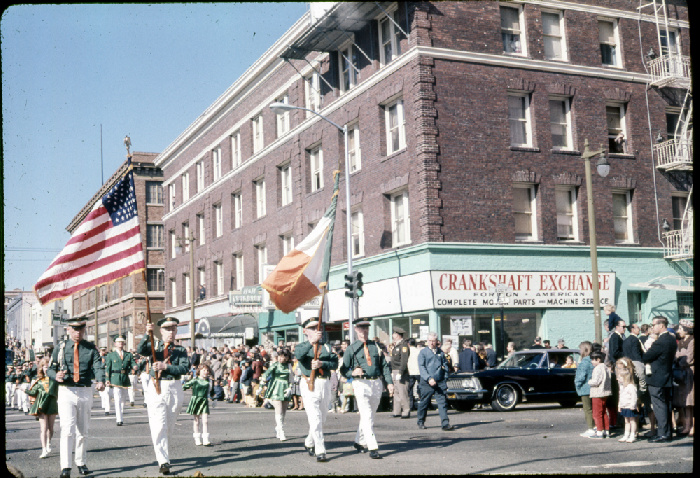 By 1968, with BART construction in full swing on Market Street, the annual St. Patrick’s Day Parade took an alternate route to Civic Center and is shown here crossing Eddy Street and then continuing along Polk Street to its final destination. Just like the Chinese New Year Parade, the St. Patrick’s Day event traces its origins back to the Gold Rush era of the early 1850s. 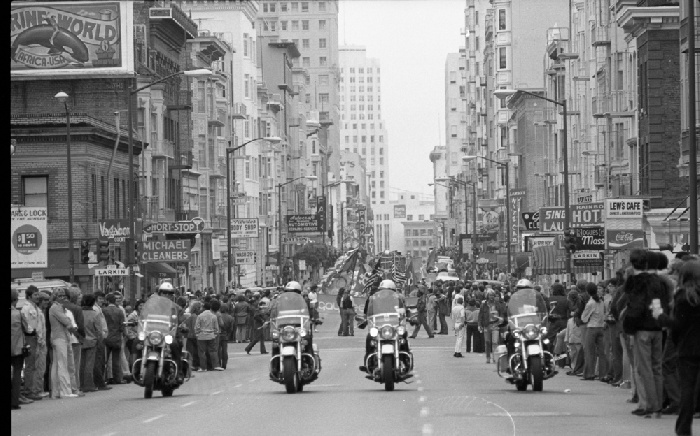 Pride (then known as “Gay Freedom Day”) Parade moves up O’Farrell Street to Civic Center in 1974. The event, which began with an estimated 15,000 spectators in 1972, had an estimated attendance of 60,000 spectators by 1974 and has continued to grow significantly each year. See more pictures from the 1974 Gay Freedom Day parade and read about the history of the early days of SF Pride. 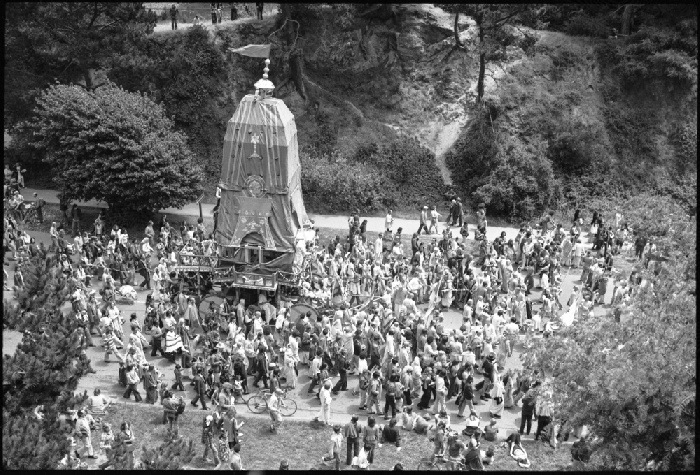 This Hare Krishna Parade was held in Golden Gate Park in the Summer of 1974. Read details of this event. 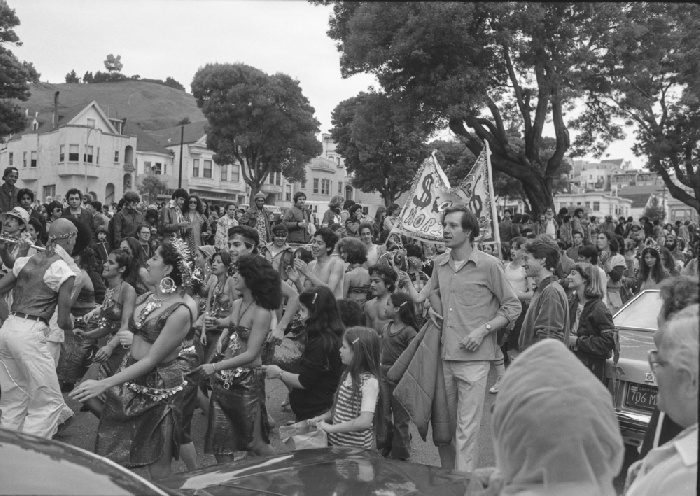 Carnaval San Francisco is a multicultural celebration of music, dance, and artistry that began in 1978, presenting Latin-American, Caribbean and African cultures and traditions. This 1979 parade at Precita Park was an early recorded image of the celebration. Read more about this annual event. 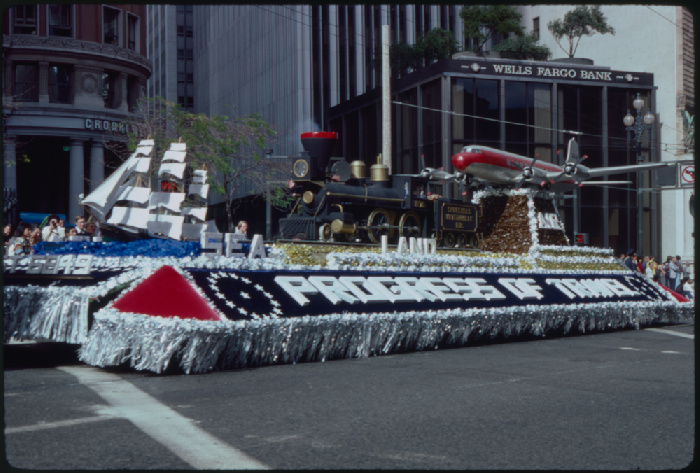 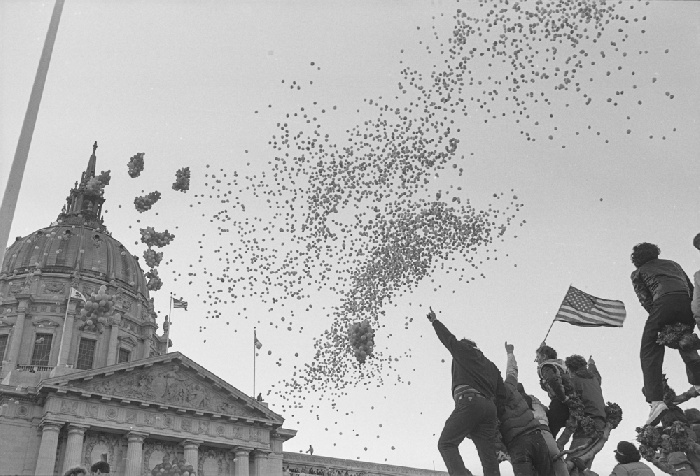 The Victory Parade as the 49s won the 1982 Super Bowl (beating the Cincinnati Bengals 26-21 in Pontiac, Michigan) drew an estimated 50,000 people to San Francisco City Hall, with some of the revelers sitting in trees as masses of balloons were released into the air. Read more about this event.

Everyone spends time at a playground when they are young. As we age, we again visit playgrounds with our children and grandchildren and revel in them again through their eyes. San Francisco was at the forefront of the development of modern playgrounds in the United States. Children’s Playground in Golden Gate Park is often cited as the first American public playground, though Boston might have beaten them to it by a year or two. Nonetheless, Children’s Playground has been delighting children for over 140 years. 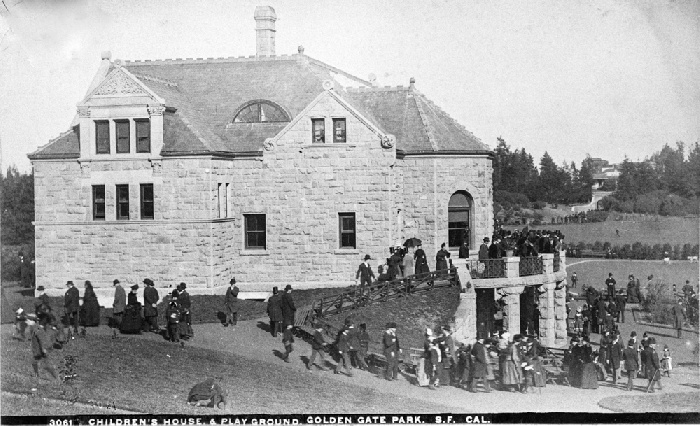 The playground got its start with a $50,000 bequest from the trustees of the estate of former Senator and businessman, William Sharon. It was unclear whether this bequest was something Sharon wanted to do or was something that the estate trustees decided was a good idea.1 Initially there was talk of using the money for a lake or a music hall or a marble archway park entrance. The latter idea was actually approved and was to be placed at a Stanyan Street park entrance between Fell and Oak. 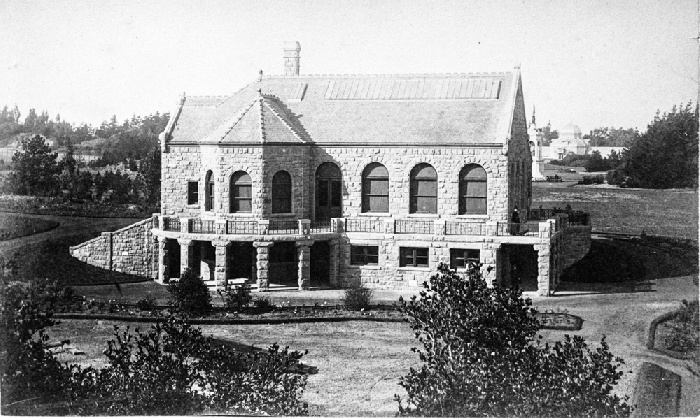 Sharon Building at Children’s Playground with Conservatory of Flowers in background, circa 1890. (wnp37.00114.jpg; Marilyn Blaisdell Collection / Courtesy of a Private Collector)

Construction on a marble archway designed by architect John Gash started in 1886.2 However, Park Commissioner William Hammond Hall stepped in to put a stop to it, convincing the Park Commission that the money should instead be used for a children’s playground. A “children’s quarters” had been part of the original Golden Gate Park plan. The archway was not completed and was demolished instead. 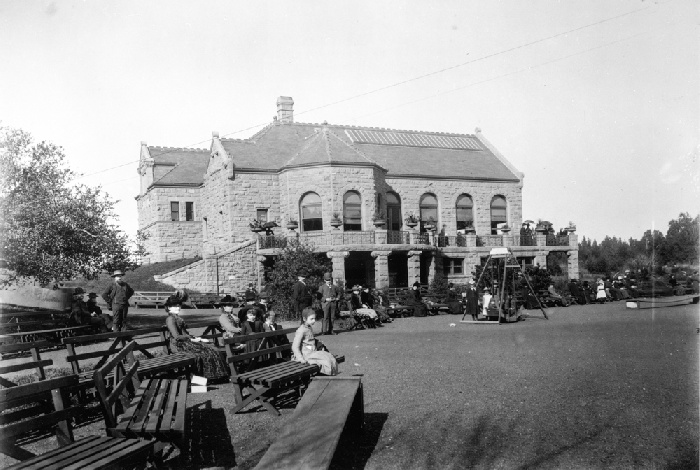 Children’s Playground and Sharon Building, circa 1890. (wnp26.709; Courtesy of a Private Collector)

On Saturday, December 22, 1888, the “Sharon Children’s Quarters” and Sharon Building were dedicated and opened.3 2000 people came out for the ceremony despite the threat of rain. At noon, a rainbow appeared as if to give blessing to the playground. Commissioner Hall gave a speech to the crowd stating at the beginning that “[a]ll children are invited to this playground, be they rich or poor, each one having equal rights and privileges.” 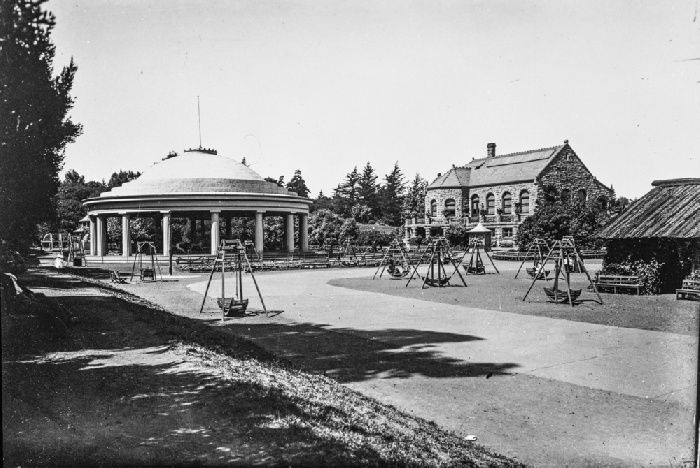 The Sharon Building by the playground was built to provide refuge for mothers and children in poor weather. It was designed by architects George Washington Pearcy and Frederick F. Hamilton in a Victorian Romanesque style. It featured a playroom on the lower level and a coffee and refreshments area on the upper level.4 It was later damaged in the 1906 earthquake and fires in 1974 and 1980, but has been fully restored each time. 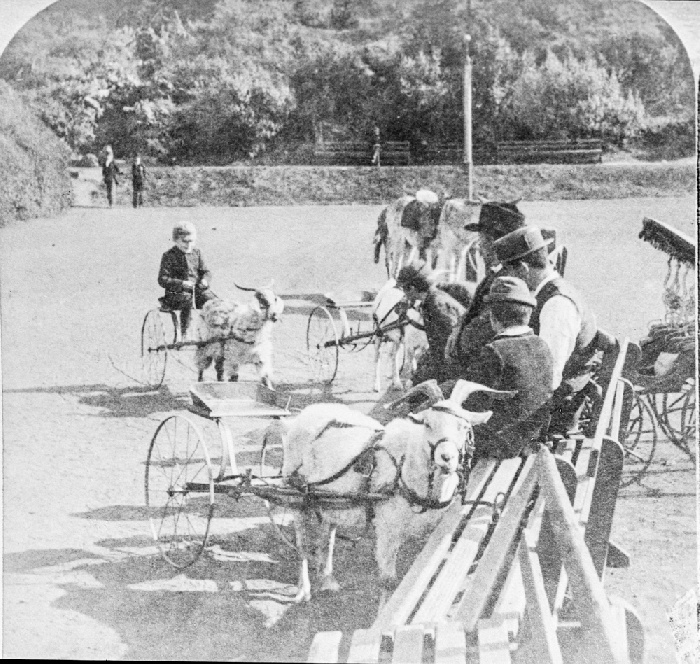 Among the children’s activities at the playground were gondola swings, slides, see-saws, a maypole, a boys baseball field, and a girls croquet court. Then there were the rides. Children could enjoy a ride in a cart pulled by a goat… 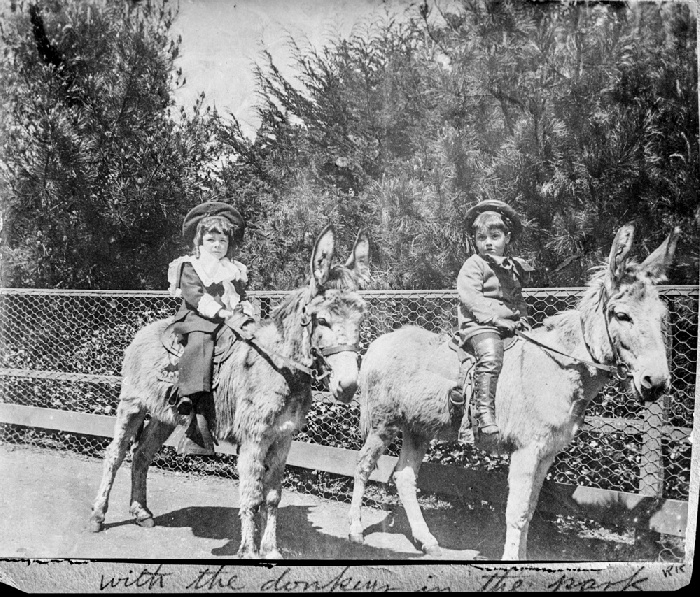 …and donkey rides. The animal rides are long gone and the children’s playground has been updated and improved over the years. 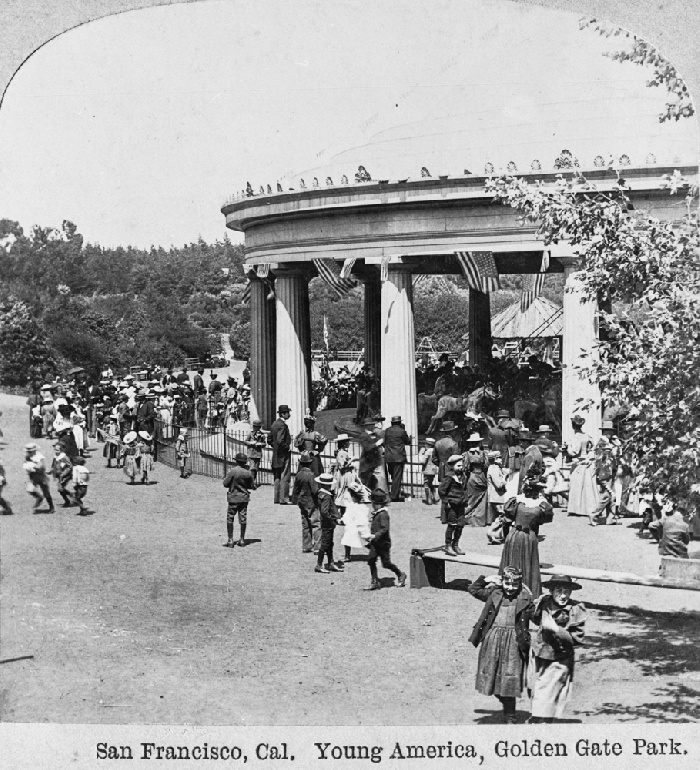 In 1890, a merry-go-round was constructed at the Children’s Playground and it began operation in January 1891.5 It was capable of carrying 100 riders and allowed children to rock the “horses.” The reports about this merry-go-round opening indicate that it replaced a prior one. It was in turn later replaced with a carousel from the Golden Gate International Exposition on Treasure Island in 1939-40. Herbert Fleishhacker donated $14,000 to purchase it and have it moved to the Children’s Playground. That carousel was shut down because of safety concerns in 1977, but was restored and reopened on June 30, 1984.

Today, children continue to enjoy the playground and the Sharon Building now houses the Sharon Art Studio. The non-profit organization offers classes in all types of art for both children and adults.

Listen to the 2018 Outside Lands Podcast about Children’s Playground.