Today is officially the 50th anniversary of the closing of Playland on Labor Day, September 4, 1972. Earlier this year, we did OpenSFHistory Top Ten features on the rides at Chutes at the Beach, Playland’s predecessor and Playland’s attractions. However, Playland wasn’t all fun and state fair-like games. There was also a great deal of good food to be found both in Playland and nearby. So here’s a Top Ten round-up of what you could eat there. 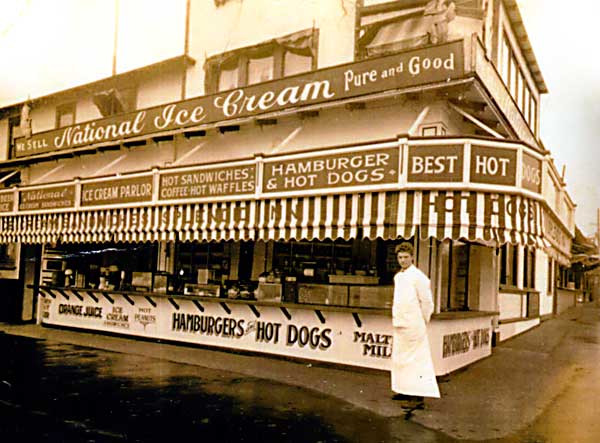 Splendid Inn at corner of Fulton and Great Highway, 1930. (Courtesy of Pete Batanides)

We will take the food tour by walking up the Great Highway, starting at Fulton Street. That’s where we find the Splendid Inn. Long-time WNP member Pete Batanides grew up working there because his grandparents owned and operated the restaurant. The building the restaurant was in started out as Sheehan’s Tavern and later became the Billows Restaurant. As the Splendid Inn, it had breakfast–coffee and waffles–and diner–hot dogs, hamburgers, and hot sandwiches–options. 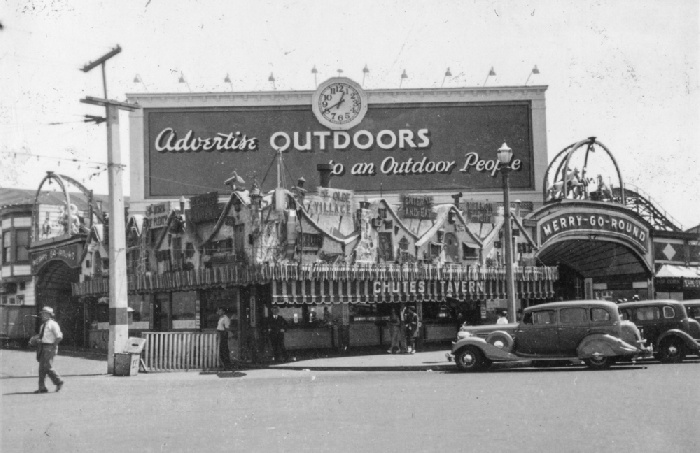 We walk up the block toward Cabrillo. Just past the Carousel, we come upon the Chutes Tavern at the southeast corner of Great Highway and Cabrillo. Parents seeking a place to relax while the kids tackled all the rides might find their way there. The men might have an alcoholic beverage or two. 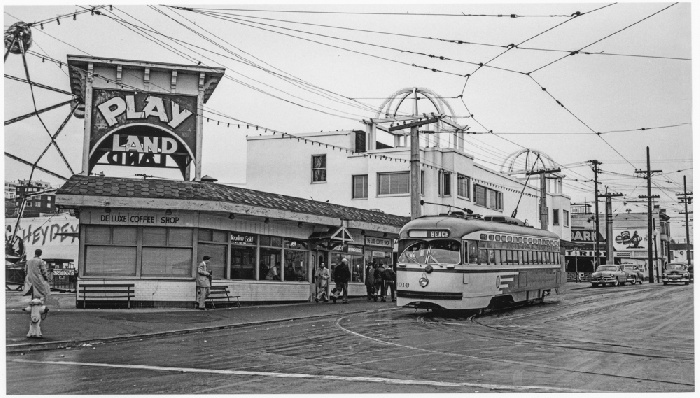 What amusement area would be complete without a coffee shop? At Playland, you had no regular coffee shop, but the Deluxe Coffee Shop. It was conveniently located across the street from the Chutes Tavern at the northeast corner of Cabrillo and Great Highway, where Muni B-line streetcars dropped off Playland-bound passengers. So if you need that jolt of caffeine before starting your day of fun, it was right there when you arrived. Besides the coffee, the Deluxe Coffee Shop, like other food establishments at Playland, also served up hamburgers and hot dogs. 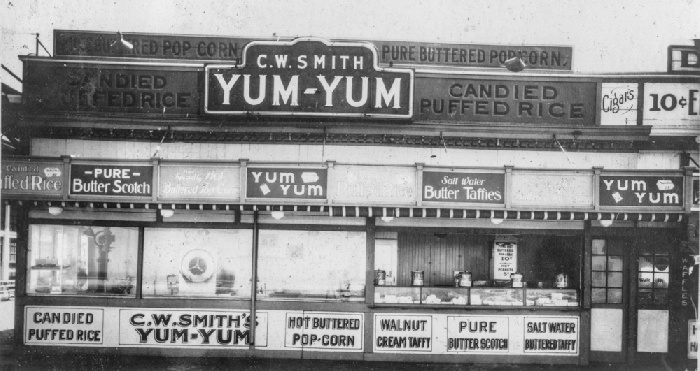 We walk north to the shop next door to satisfy our sweet tooth. This is the Yum-Yum Shop. It has all kinds of goodies that your dentist would surely tell you not to eat. Butter seemed to be a big ingredient as they had hot-buttered popcorn, butter taffies, and butterscotch. Candied puffed rice, walnut cream taffy, and salt water taffy were also featured. 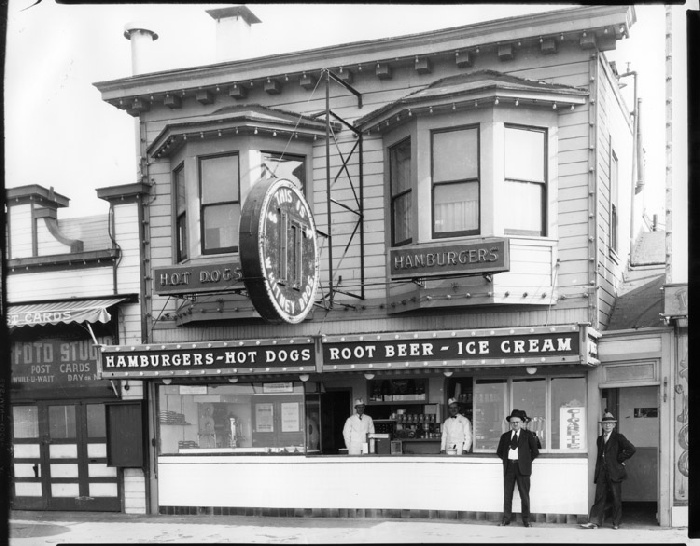 We stop for some skeeball next to the Yum-Yum shop, but then continue on to the This is IT cafe just past the skeeball. It is, of course, well known as the place where the It’s It ice cream cookie sandwich was created in 1928 by George Whitney. However, it was not just a place to get an ice cream cookie covered in chocolatey delicious goodness. It was also another place you could get hamburgers and hot dogs and other foods. The Museum at The Cliff features an original menu sign from the This is IT cafe from the late 1960s. It, or rather its iconic ice cream cookie sandwiches, lives on. Under new ownership, the tasty delight is now manufactured at a shop in Burlingame. 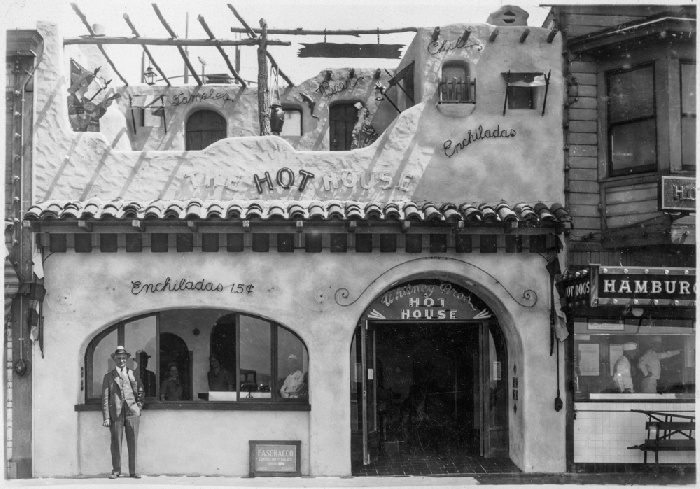 Next door to the This is IT cafe was the Hot House. It opened at Playland in the 1930s and operated there until the Labor Day closing in 1972. Although primarily serving Mexican food like tamales–it was estimated that they served up to 12,000 tamales on busy World War II weekends–the Hot House also featured spaghetti and other non-Mexican fare. You could eat inside or pick up an order at the take-out window. The Hot House lives on today as a pop-up eatery and is run by the son of the original owner. 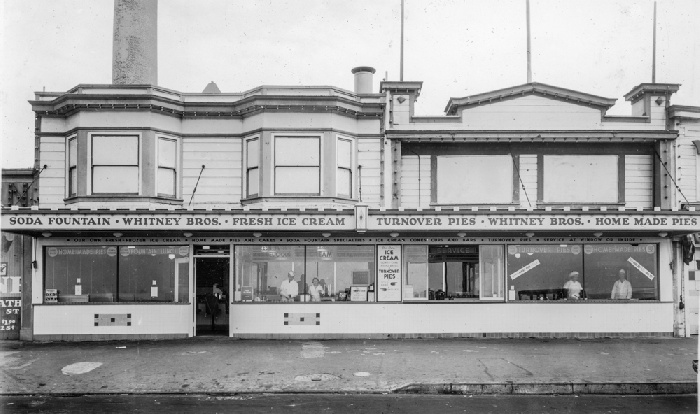 We pass by the Shooting Gallery on our way to the Pie Shop. They advertised that their pies were homemade and that they were baked fresh daily. And as the signs said on the exterior, you could also get ice cream and soda, so sundaes, milkshakes, and malted milks were all on the menu as well. Besides your typical dessert pies, you could also get meat pies if you were so inclined. With the big windows facing the street, crowds would often stare in at the bakers at work, no doubt salivating over the end results. 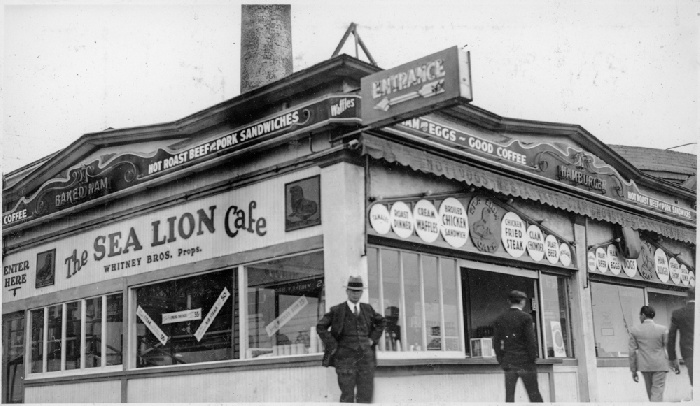 As we keep heading toward Balboa, we find the Sea Lion Cafe next to the Pie Shop. This was one of the earliest Playland-owned restaurants and lasted into the 1960s. Unlike the many hamburger and hot dog places, the Sea Lion advertises ham and eggs, roast beef, pork, or chicken sandwiches, fried steak, and clam chowder. After it closed in the 1960s, the space reopened as the Whitney’s Waffle House. 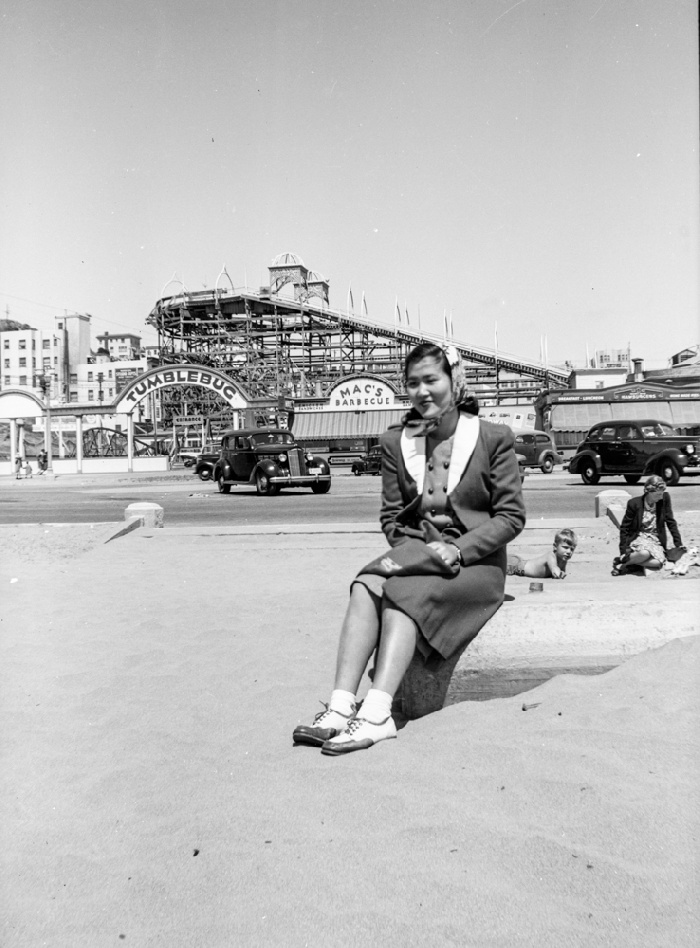 Young woman sitting on Esplanade across from Mac’s Barbecue at Playland, circa 1940. (wnp14.4785.jpg; Courtesy of a Private Collector)

This young lady is sitting across the street from Mac’s Barbecue at Playland, which was located on Great Highway near the corner with Balboa Street and next door to the Sea Lion Cafe. Mac’s featured hot dogs, hamburgers, chicken sandwiches and was the “Home of the Great Apple Pie.” Was the Mac’s Barbecue apple pie greater than the Pie Shop’s apple pie? Inquiring minds want to know. It does seem abundantly clear that pie was very popular at Playland. 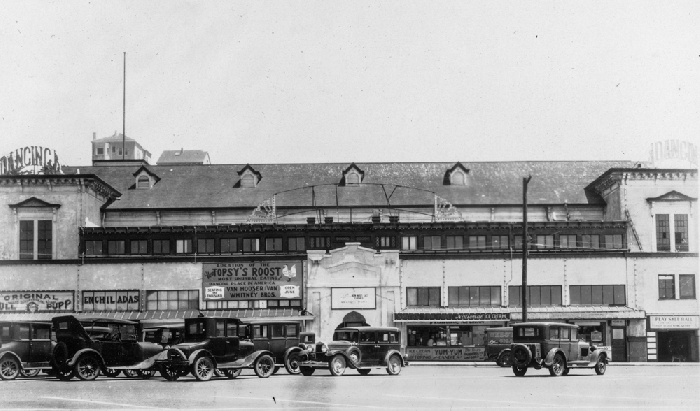 We cross over Balboa Street to reach our final destination at the former Ocean Beach Pavilion. At this time around 1930, it had become Topsy’s Roost, a chicken restaurant, that would unfortunately later feature some racist advertisements on the building. Also in the building is the Bull Pup, at bottom left of the image above, a restaurant that moved around a bit, though always in the same general area. The Bull Pup sold tacos, enchiladas, chili, and burritos.

Other restaurants and food concessions came and went in the Playland area over the years. Many of the above were still around at or near the end of Playland’s days. It was all torn down after Labor Day weekend in 1972. It may all be lost to the ravages of time, but the memories of these food delights still tickle our stomachs today.