This year marks the 50th anniversary of the closing of Playland in 1972. That means that most of us never got a chance to visit San Francisco’s own amusement park by the beach and, for those still around who did, few got to see it in his heyday. And there is likely no one or very few left who visited it when it was called Chutes at the Beach before morphing into Playland around the end of the 1920s. So for the benefit of all, here’s an OpenSFHistory Top Ten look at the attractions at Chutes at the Beach. 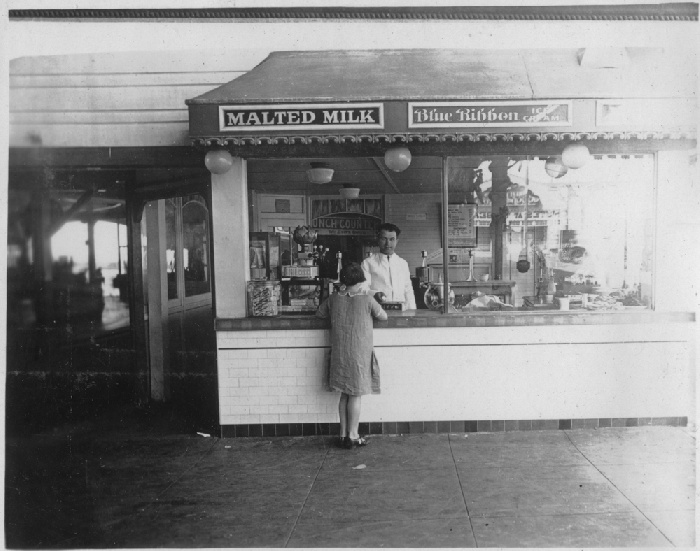 We begin with the ride that was the centerpiece at the amusement park’s beginning. Before it was even named Chutes at the Beach, the area by the Great Highway and Fulton Street had a number of carnival games and refreshment stands. In 1913, Charles Looff, who was a builder of carousels, brought one to this burgeoning play area. He enclosed it in what he called the Looff Hippodrome. Later, it would just be called the Merry Go Round. The carousel itself still exists today. It returned to San Francisco in 1998 and was installed at Yerba Buena Gardens. 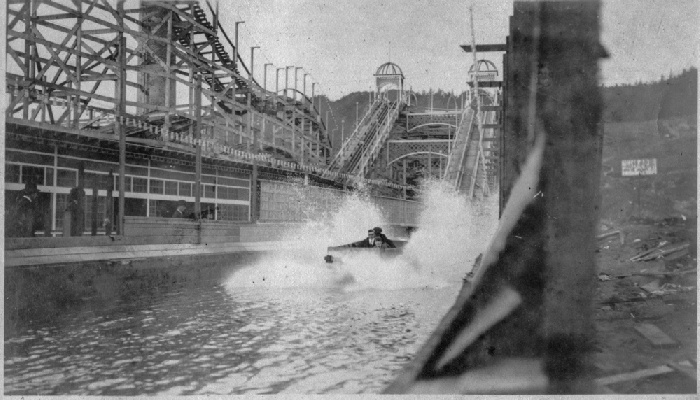 After Charles Looff’s death in 1916, his son Arthur took over the carousel operation and soon began plotting with John Friedle, a concessionaire, to expand operations. With the acquisition of some additional land nearby, they built a water ride called Shoot the Chutes, which we wrote about in greater detail here. The ride was built at the north end of the amusement area by Balboa Street. Because of the popularity of prior Chutes rides in San Francisco, Looff and Friedle named the area Chutes at the Beach. As other, more exciting rides were built, the Shoot the Chutes ride became less attractive and it was torn down in 1950. 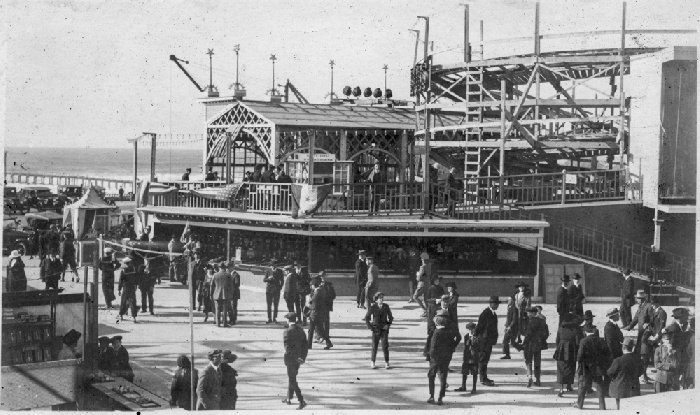 An early coaster ride at Chutes at the Beach was the Bob Sled Dipper. It was designed to emulate a toboggan ride where riders sat one in front of another.1 From the loading platform, the sleds were pulled up to the top from where one got a fast ride to the bottom. After a serious accident on April 16, 1929, which injured seven people, Friedle declared that he wanted it gone. 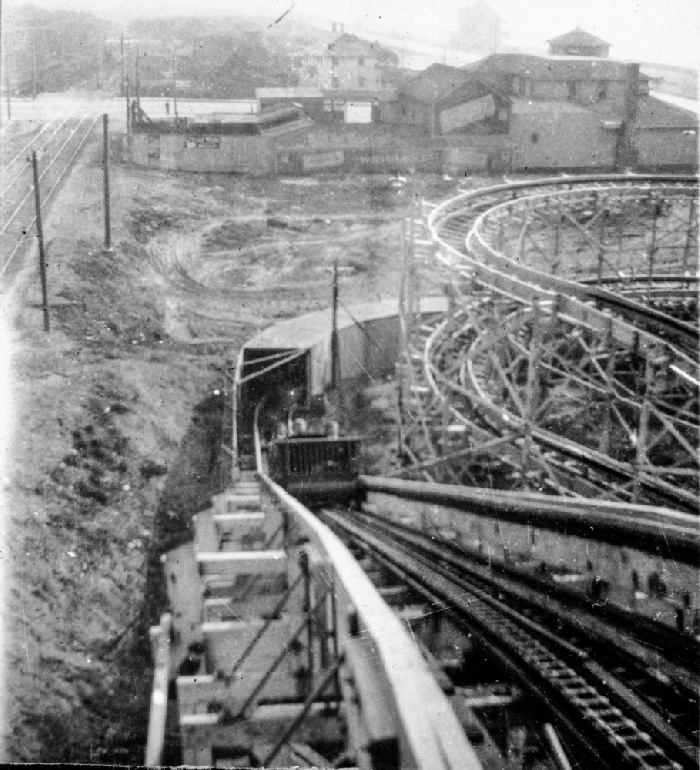 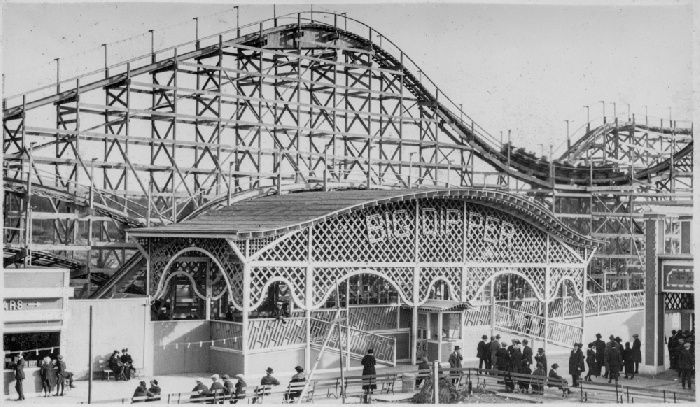 The Golden Age of rollercoasters was the 1920s, when newer, faster ones spread to amusement parks around the world. Looff and Friedle got on board with the craze and in 1922, after demolishing the Figure 8, they replaced it with the new style rollercoaster. It was called the Big Dipper. It quickly became the biggest attraction at Chutes at the Beach. A number of accidents and injuries over the years led to new safety regulations that essentially required the closure and demolition of the Big Dipper in 1955. 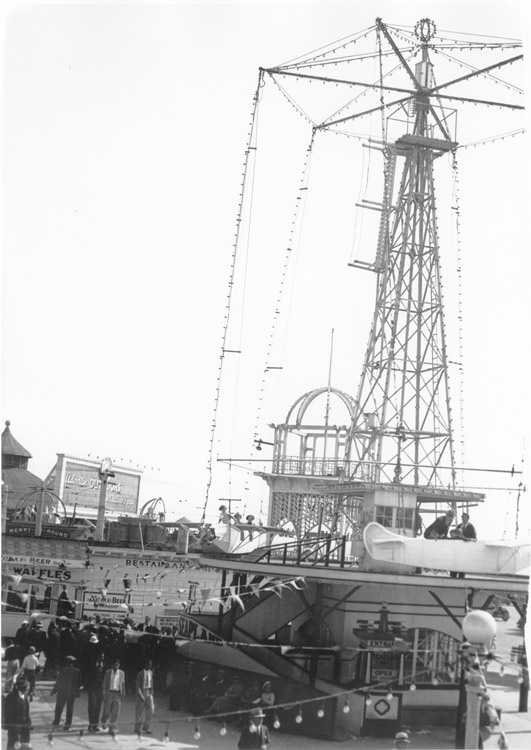 A staple of the earlier Fulton and Fillmore Chutes parks was a large swing ride called the Circle Swing, which, as the name suggested, spun in a circle swinging cars around and out. Chutes at the Beach replicated this ride with their version called the Aeroplane Swing. However, the cars only held two people, so it was later replaced by a newer version with larger cars to hold more people called the Seaplane Ride. 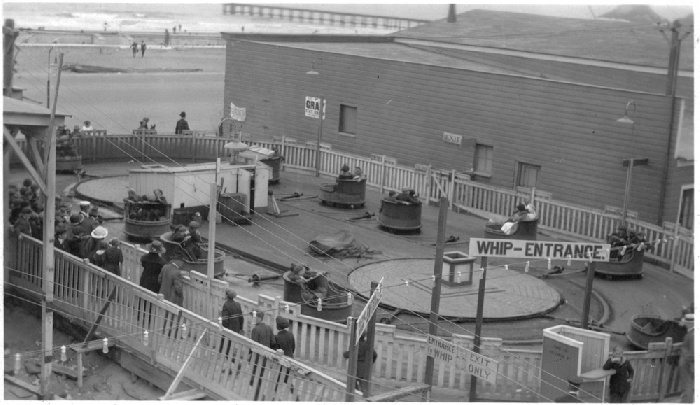 The Whip ride involved barrel cars on a swivel that were attached to a chain that traveled around an oval turntable. Centrifugal force would push riders into the back of their cars as they were “whipped” around the end of the turntable. We imagine there may have been a few people who lost their lunch when riding the Whip. 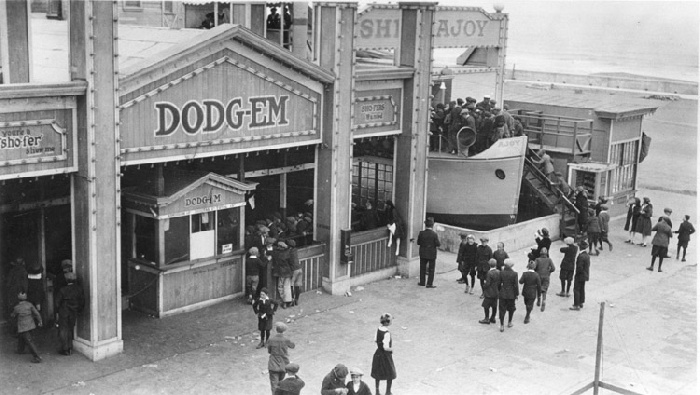 A regular feature of boardwalks and amusement parks are bumper car rides. Chutes at the Beach was no different with their version of the ride called Dodg’Em. It had a charged sheet metal roof and a grounded metal floor which powered the cars. While the stated purpose of Dodg’Em may have been to “dodge” other cars, it couldn’t have been long before kids made it their purpose to target other cars. 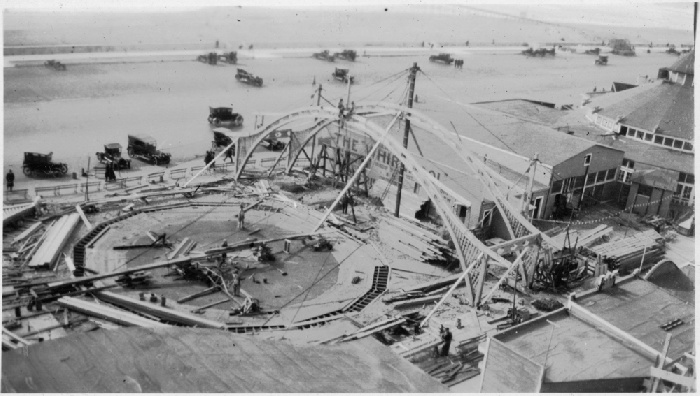 The Whirlpool was another turntable ride. Washtub like cars on casters with a friction mechanism would be spun and flung out and up the sides of the turntable bowl as it spun around. Then the washtub would drift back to the center of the turntable being getting flung out again. This is another ride that likely was stomach churning. 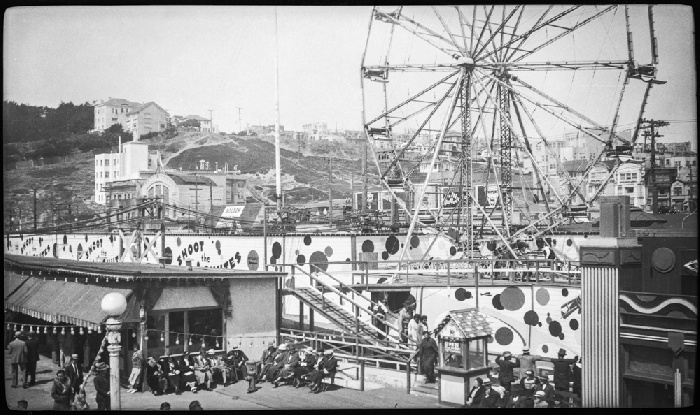 George Washington Gale Ferris, Jr. debuted his Ferris Wheel at the 1893 Chicago World’s Fair. The organizers of the 1894 Midwinter Fair in Golden Gate Park couldn’t get Ferris to bring his wheel to San Francisco, so they persuaded J. Kirk Firth, owner of the local Phoenix Iron Works, to replicate it. The Firth Wheel spent about six months at the fair and then was bought by Adolph Sutro, who installed it on Merrie Way above the Sutro Baths, where it only lasted a short time. Finally, an actual Ferris Wheel was installed at Chutes at the Beach by the early 1920s.

Some of these rides survived into the Playland-era, which also brought on even more rides. We’ll take a look at some of those at a later date.