San Francisco is the final resting place of many ships. Besides the gold rush ships that were simply abandoned here, our notorious fog has caused shipping lane collisions or caused ships to run aground. The remnants of some of these shipwrecks can still be seen along our shorelines from time to time. One of those visible wrecks can be seen from the Lands End Coastal Trail and came to its tragic end 85 years ago. 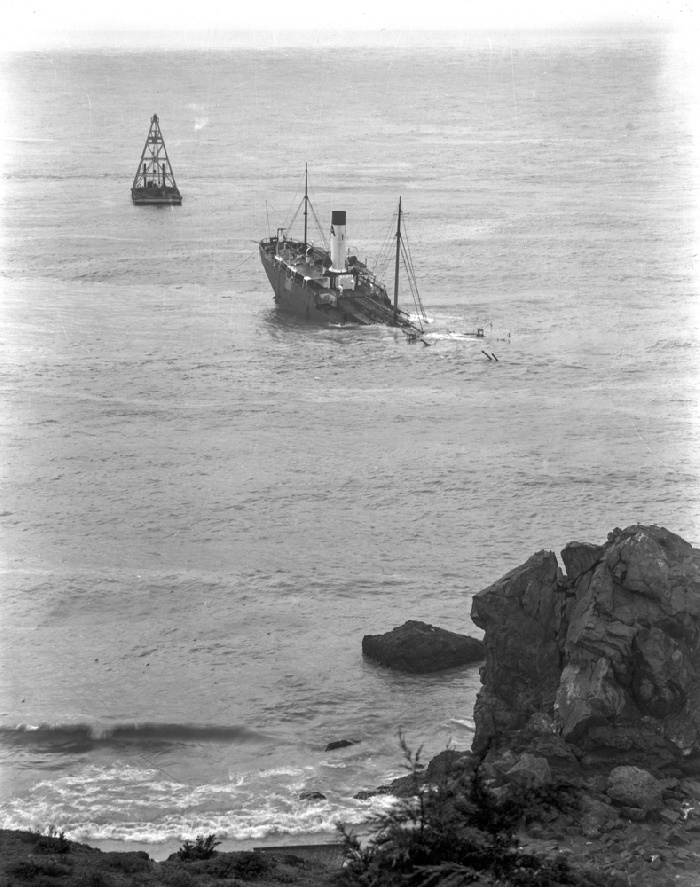 The Frank H. Buck was an oil tanker built at San Francisco’s Union Iron Works plant at Potrero Point. It was named after a vice president for the Associated Oil Company, for whom the tanker was made. Construction took just five months and the Frank H. Buck launched on February 11, 1914.1 The tanker was 426 feet long and could hold 67,000 barrels of oil. 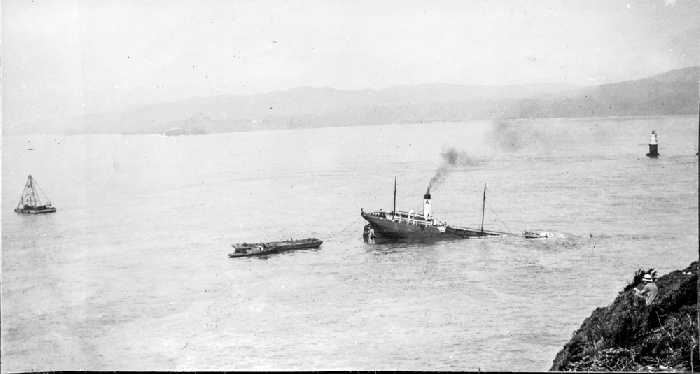 A few years later, the Frank H. Buck was conscripted into the United States Navy for duty in World War I and even saw battle engaging in a firefight with a German submarine.2 After the war ended, she was returned to Associated Oil for tanker duties. Over the next five years, the Frank H. Buck developed a reputation for running aground, doing so three times, once at Point Montara, another time at Astoria in Oregon, and then at Point Pinos in Monterey Bay. However, they kept patching her up and sending her back out. 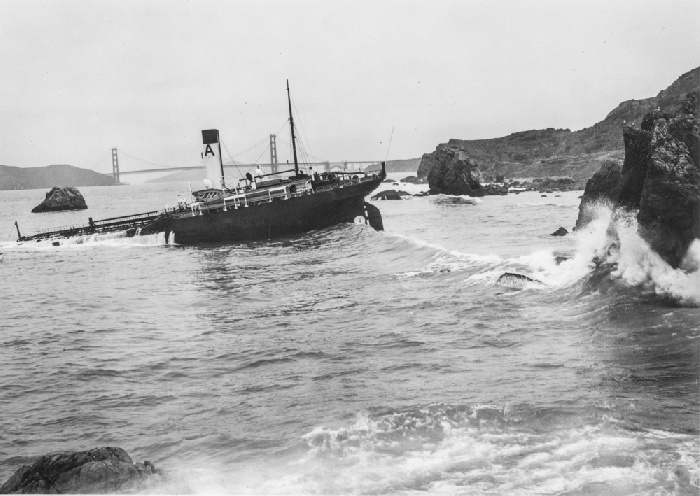 On March 6, 1937, the Frank H. Buck was under the command of Captain Robert W. Kelly and was headed into the Golden Gate from Ventura with a load of oil for the refineries in Martinez.3 As the Frank H. Buck came in, a huge passenger liner, the SS President Coolidge was leaving the Bay with 678 passengers and 350 crew members headed for Honolulu and then Yokohama, Japan. As happens all too often here, a heavy fog had descended upon the Golden Gate. 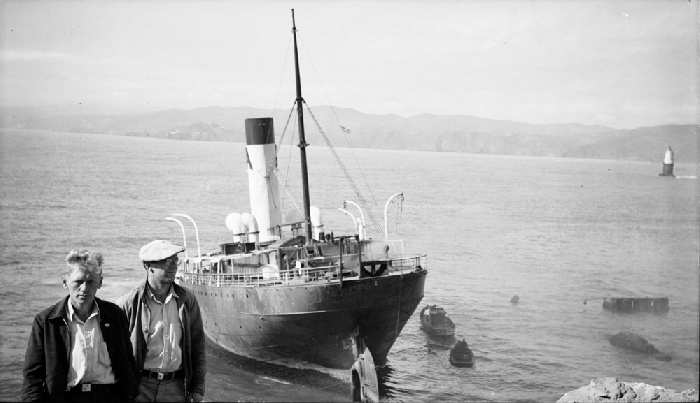 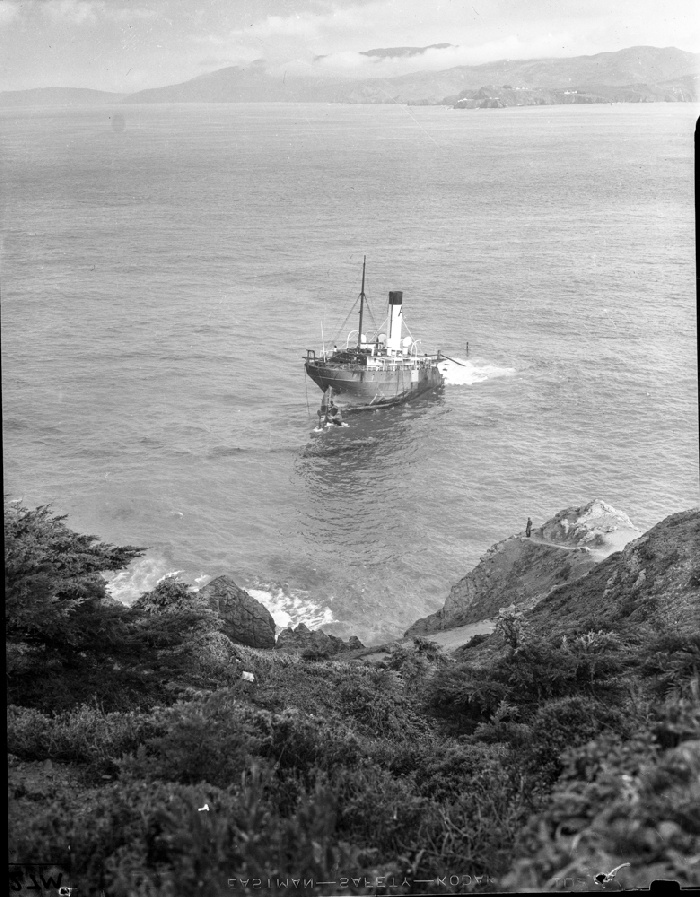 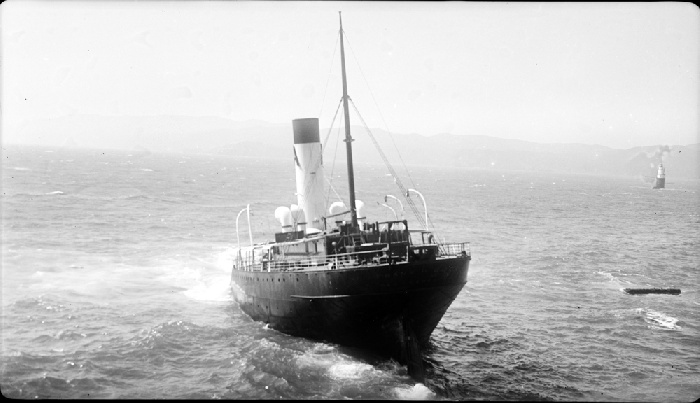 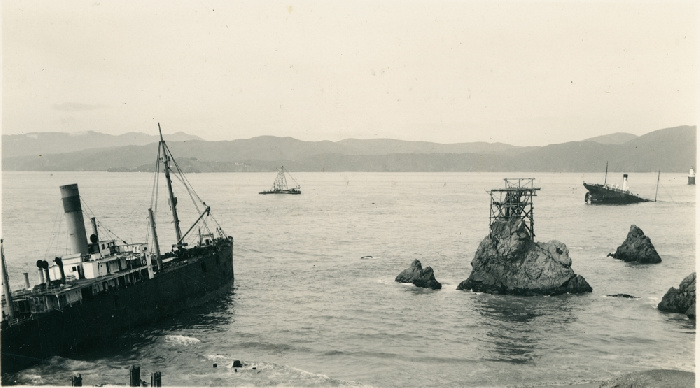 Where the Frank H. Buck came aground was also close to where the SS Ohioan had wrecked only five months before on October 6, 1936. A photograph that was taken of the two ships for the San Francisco Chronicle4 on the day after the Frank H. Buck wrecked would later be etched onto mirrored glass that was attached to a ship’s wheel that is allegedly from one of the ships. That ship’s wheel was displayed in the Cliff House for years before the Western Neighborhoods Project bought it at the Cliff House auction last year. It is now displayed at our office. Although most of the Frank H. Buck wreck was removed or detonated, parts of it can still be seen today along the Lands End Coastal Trail, which has signage about it.