Earlier this month, Streetwise on Outsidelands.org took a look at the many private, non-sectarian schools operating in the western neighborhoods that are educating more than 4,000 students on a daily basis. This led to taking a closer look at what is going on in other City neighborhoods, and thus the focus of this month’s Streetwise for OpenSFHistory.org—namely, that an additional 8,000 young people are enrolled in private, non-sectarian schools in other parts of San Francisco.

The following 35 schools in the Mission, Noe Valley, Pacific Heights, the Portola, Potrero Hill and other neighborhoods are co-educational, except as noted, and all appear to have diverse student bodies, need-based tuition waivers/assistance, plus active programs in sports, music, science, and arts. Enrollment numbers are noted in parentheses.

A review of closed and then-current, as of July 2018, Catholic Schools throughout San Francisco appeared in Streetwise column on Outsidelands.org several years ago. 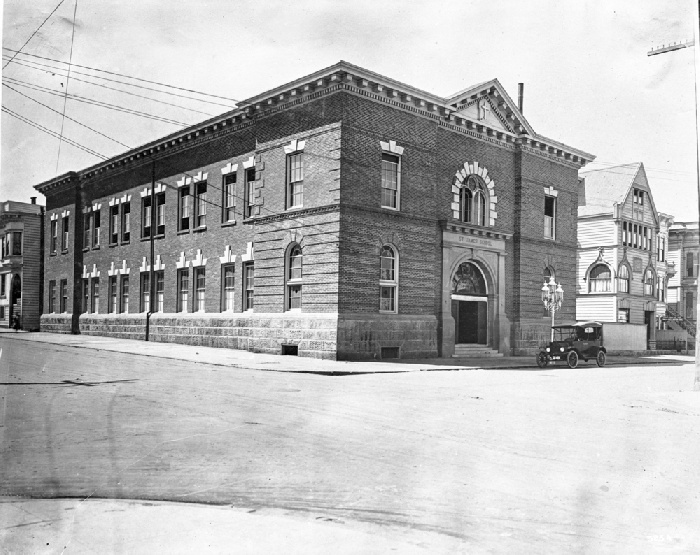 Adda Clevenger (136)—The St. James Boys School in the Mission District at 23rd & Fair Oaks (built in 1908 and shown here in 1916) was closed in 1970 and merged with the nearby St. James Girls School. The 1908 brick building is now occupied by the private Adda Clevenger School, founded in 1980, where its PK-8 program is operating.

Alta Vista School (180+)—K-5 on Somerset Street at the former St. Elizabeth’s School in the Portola.

Alta Vista School (140+)—Grades 6-8 operating in a new building at 2558 Mission Street that was once the site of Hale’s Mission store.

Big City Montessori (100)—Nursery-PK on Industrial Street in the Bayview. 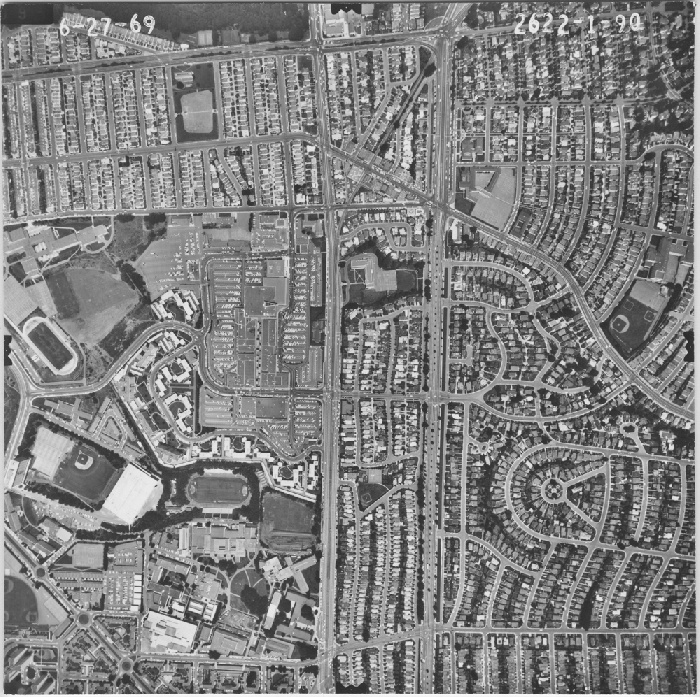 Chinese-American International School (500)—Founded in 1981, the school currently has three
campus locations: Pre-K (75) on Waller Street, K-5 Main Campus (250) on Oak Street, and Middle School Campus (175) on Turk Street. In 2021, the school purchased the former Mercy High School campus on 19th Avenue, which operated from 1952 to 2020, and when renovations are completed prior to the 2023-2024 school year, all three divisions will be relocated to the 19th Avenue site.

Drew School (280)—Grades 9-12, founded in 1908 and located on California Street near Presidio Avenue.

French-American International School (1,085)—Nursery through Grade 12 located on Oak Street near Market in an expanded cluster of buildings once used by the California State Division of Highways.

Fusion Academy (55)—Grades 6-12, located on Battery Street near the Embarcadero.

Golden Bridges School (95)—PK-6 school on Cambridge Street in the Portola at the site of the former Convent of the Good Shepherd/Immaculate Heart School. 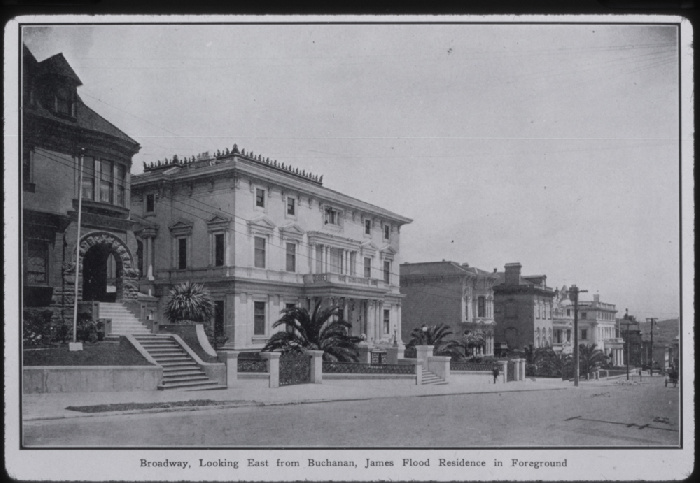 Hamlin School (436)—Founded in 1896, this K-8 school is located on Broadway in Pacific Heights. A high school division also operated there for many years, but it was closed in 1975. The girls-only institution is regarded as the oldest nonsectarian, independent day school for girls in the western United States. In 1927, the school acquired the former James Flood mansion, built at 2120 Broadway in 1900, as its new location—where it continues to operate today on an expanded footprint. [Note: Despite a somewhat similar appearance, the above structure is completely different from a later Flood family home one block west at 2222 Broadway, which was built in 1912, and then donated by Mrs. Flood to the Schools of the Sacred Heart in 1939, where it has operated as Convent of the Sacred Heart ever since.] 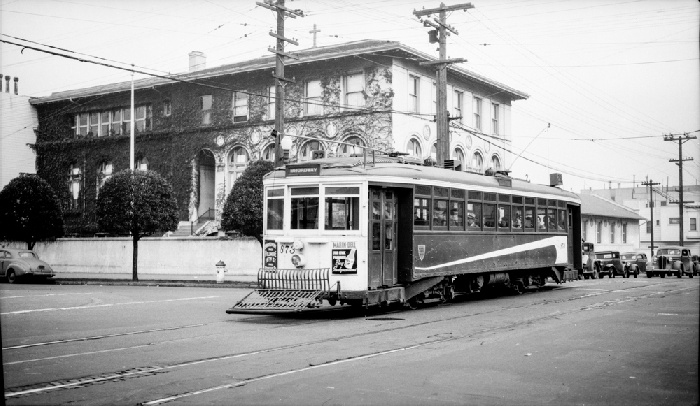 Holy Family Day Home (78)—Nursery/1st located at a former Catholic school site on Dolores Street. Reorganized after the school was rebuilt in 2007, it retained its historic name, but now operates as a non-sectarian institution with a lay board of directors. The original Holy Family Day Home began operations in 1900 as a resource for working families, and was located at 6th & Brannan Streets in the working-class South-of-Market neighborhood. Following its loss in the 1906 earthquake and fire, the institution relocated in 1911 to 16th & Dolores Streets (shown here in 1939) where it operated until the above building (designed by noted architect Willis Polk) was severely damaged in the 1989 Loma Prieta earthquake. The school was forced to cut enrollment and move into much smaller quarters nearby while options were considered. In the year 2000, the school was finally able to obtain a demolition permit for the damaged and unused historic building, and a new home was built at the site, opening in the fall of 2007. 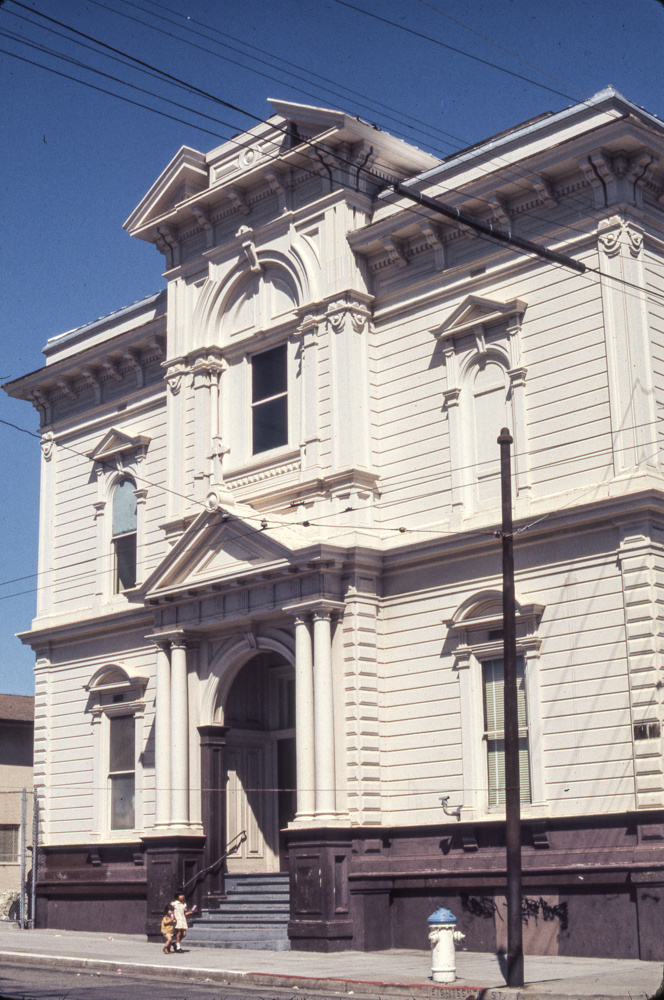 La Scuola International School (242)—The former St. Charles School on 18th Street in the Mission District (shown here in 1974) closed in 2017 due to low enrollment. The old building, constructed and operated as St. Charles Church from 1888-1916, was then used by the parish school from 1916 to 2017. It was then occupied by a series of private schools—the latest being the La Scuola International School, a K-8 multi-lingual (English/Spanish/Italian).

Montessori House of Children (100)—Nursery-PK in the Cathedral Hill neighborhood. 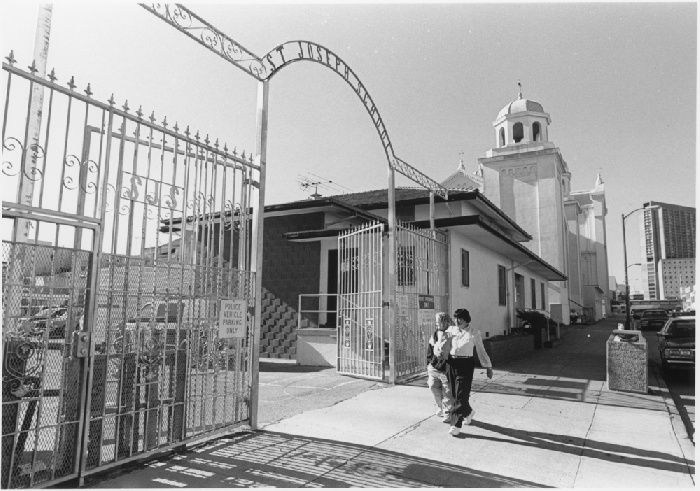 Presidio Knolls School (388)—Nursery-8 on 10th Street Mandarin-immersion school at the site of the old St. Joseph School. The former St. Joseph School operated in different buildings at the site since the early 20th century, but closed down at the turn of the millennium before being acquired by the private Presidio Knolls School. The adjacent de-consecrated church building in the image above has undergone an extensive renovation and since 2018 has been in use an art museum. Read more about the art museum. 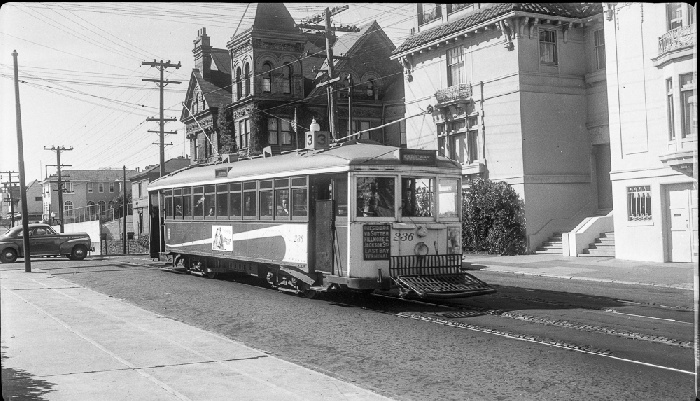 Town School (409)—A boys-only school since 1939, this K-8 is on Jackson Street in Pacific Heights. It was originally located on McAllister Street in the Western Addition. After the War, the school acquired the Gallatin Mansion at 2700 Jackson Street, shown here, behind the streetcar, in 1941. The old building, dating back to 1894, was demolished for a new Town School campus in 1958 and that new building has been expanded and renovated several times since then. [Note: In 1877, the same Gallatin family also commissioned the Sacramento mansion that later came into use as the California Governor’s Mansion from 1903-1967. That structure has now been preserved as part of a small state park in downtown Sacramento.]

Urban School of San Francisco (425)—Grades 9-12 located in the Haight-Ashbury.