Among the thousands of photos contained in the archives of OpenSFHistory, there are many images of streetcar accidents over the years—most of which seem to be from the 1940s. One must speculate if the streetcars of that era were inherently unsafe (many scenes record situations in which derailed cars were to blame), or if it was somehow operator and/or motorist error that caused these accidents. Another thought is that perhaps there were simply more street photographers from MUNI, Market Street Railway, SFPD, SFFD, and/or the press—San Francisco did have 4 daily newspapers at the time—out and about, looking to capture dramatic images. In any event, these photos have also managed to preserve many long-vanished neighborhood street scenes. 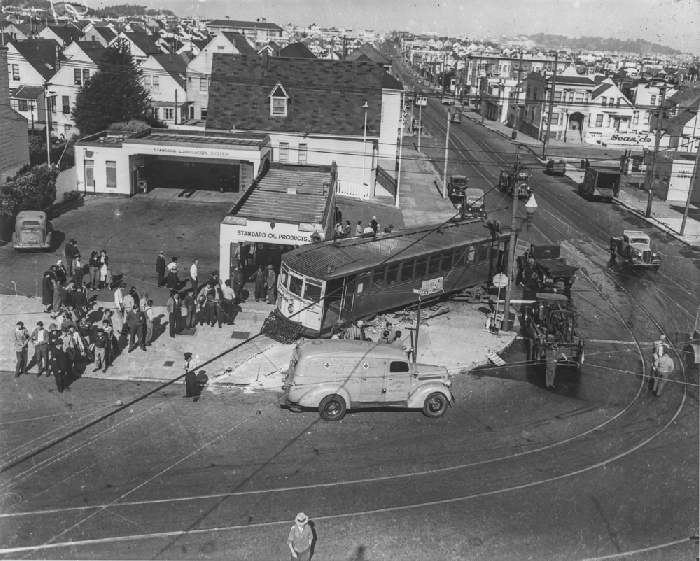 Here is an example of a car that jumped the tracks while approaching the Arguello job to Turk from Balboa. Some 20+ years later when bus service had replaced the streetcar line, the City acquired the corner gas station and installed a gentler angled curve for diesel (now electrified) buses on the 31-line to make the same turn. The remainder of that former gas station lot was later used for a construction of an apartment building. Likewise, the Seaside gas station at the corner of 2nd Avenue and Balboa was replaced in the 1960s by yet another apartment building. Note the cone atop the streetlight near the rear of the streetcar, which was in place to comply with World War II regulations on minimizing the possibility of night lighting being seen by aircraft. 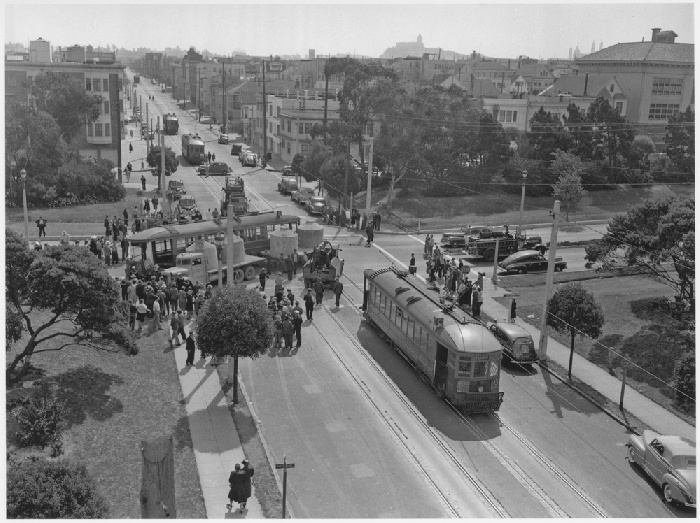 This C-California streetcar and a truck hauling what looks to be a heavy load collided at California & Park Presidio, looking east on California Street, on August 8, 1943. In the distance, San Francisco College for Women (now the Lone Mountain campus of USF) and the towers of St. Ignatius Church are visible. Sutro Elementary School, at 230-12th Avenue (since replaced with a more modern two-story structure), is also visible at upper right of this image. Neighborhood automobile traffic was decidedly light, given that this photo was taken in the middle of gasoline and tire rationing that was in effect during World War II. 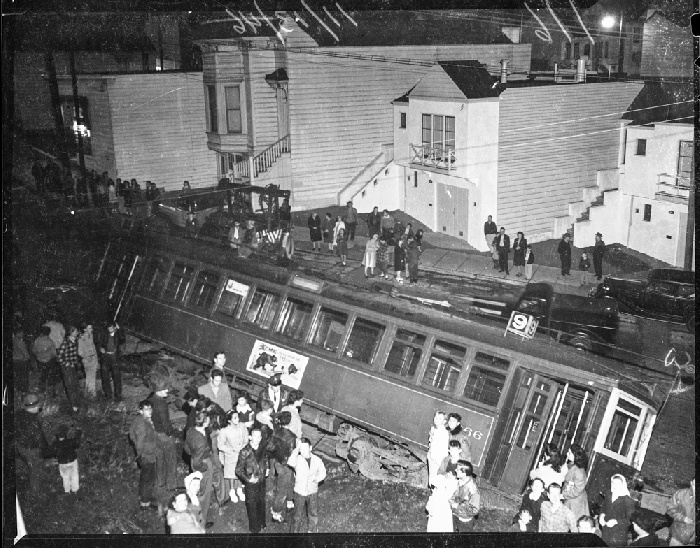 On November 13, 1946, a 9-line streetcar derailed on Cortland Avenue, in this view looking north across Cortland Avenue from 1021 Cortland. The buildings in the background are still in place today with some minor remodeling. 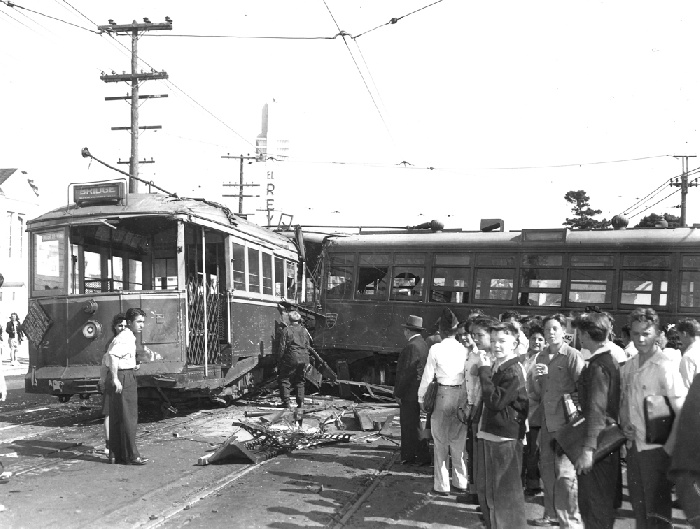 This image shows an accident involving a MUNI streetcar at left and a Market Street Railway streetcar at right on Ocean Avenue near Manor Drive, looking east on Ocean in the early 1940s. The El Rey Theatre, then just barely 10 years old, appears at left, with its directional navigation light still in place atop the 146-foot tower. Given the location, the children pictured were likely students at nearby Aptos Junior High (now Aptos Middle School). The El Rey closed in 1977, and was used as a church until 2015. The building was then sold to a group of investors and ultimately given landmark status in 2017. There are plans to restore the façade and the lobby, while building 42 housing units and an underground parking garage at the site. Learn more about the El Rey Theatre in Outside Lands Podcast Episode #110. 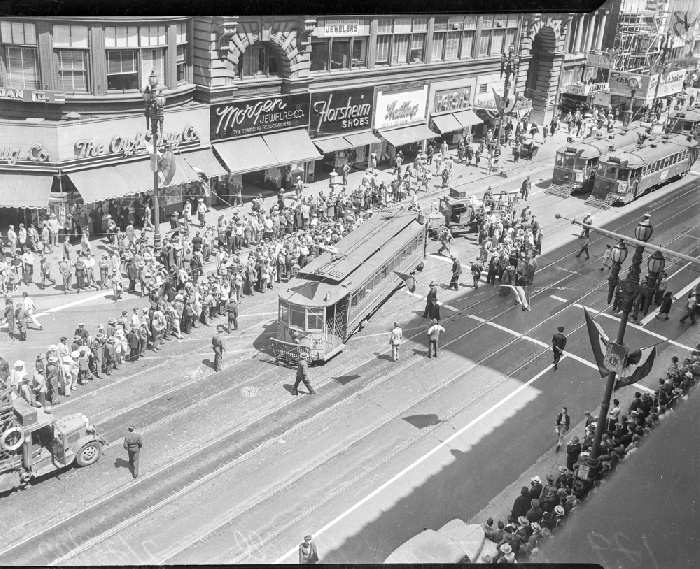 Muni 6-line streetcar derailed in front of Flood Building on July 26, 1947. Large crowd watching as wrecker trucks approach from left and right. Owl Drug Store, Morgan Jewelry, Florsheim Shoes and other retailers have all been replaced over the years. Decorations on streetlamps are for Lions International convention parade set to take place on July 28, 1947. Read about the extensive history of the Flood Building and view more historical images. 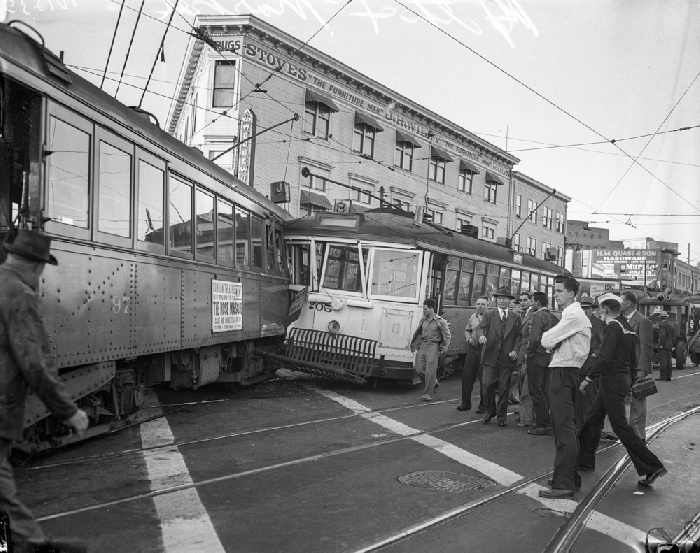 This J-CHURCH streetcar and 8-MARKET streetcar managed to collide at the corner of Church and Market Streets on September 17, 1943. The buildings in the background at far right were demolished to make way for a new Safeway store in the mid-1950s. The J.H. Wiley furniture and appliance store directly behind the accident was demolished ten years later for an expansion of the Safeway parking lot. The U.S. Mint at Duboce Avenue and Hermann Street is barely visible above Market Street buildings at right. 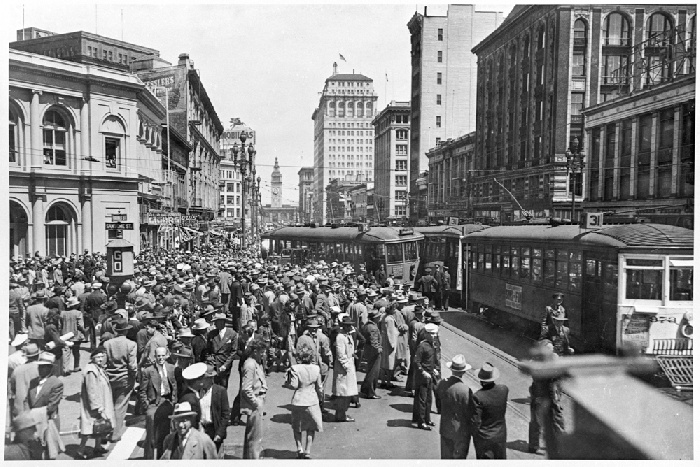 Streetcar accident at Market and Sansome, circa 1940. (wnp67.0681; Jack Tillmany Collection / Courtesy of a Private Collector) 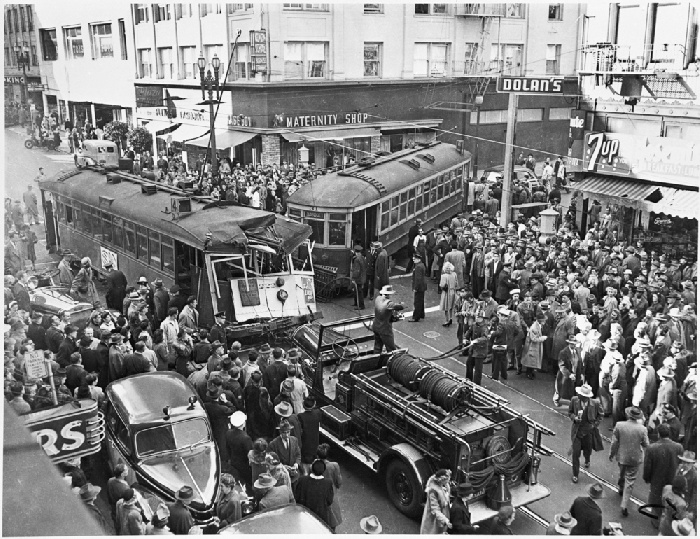 This crash occurred at the corner of Sutter and Stockton on July 23, 1947, and sadly, one person was killed. The businesses have all changed since then, and the building at right housing Dolan’s Bar was demolished in the 1950s to make way for the Sutter-Stockton Garage. Note the vintage “birdcage” traffic signals at the intersection. 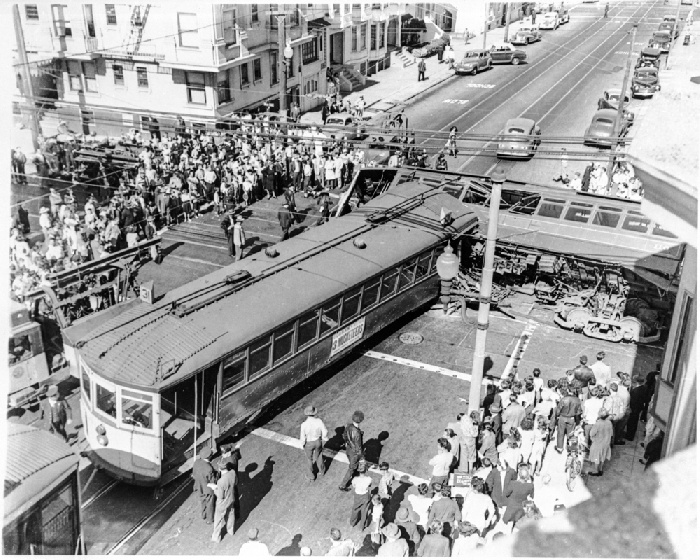 A brake failure caused this crash of two MUNI streetcars at 8th Avenue and Balboa (looking east on Balboa) on July 24, 1947. The four corner buildings remain essentially the same today while the biggest change in this street scene involves the long-ago replacement of streetcars with buses, plus the addition of street trees and the presence of many more parked automobiles in the area. Read more about this accident from an eyewitness and view more photos in Tillmany’s Ride by San Francisco historian and WNP member Jack Tillmany. 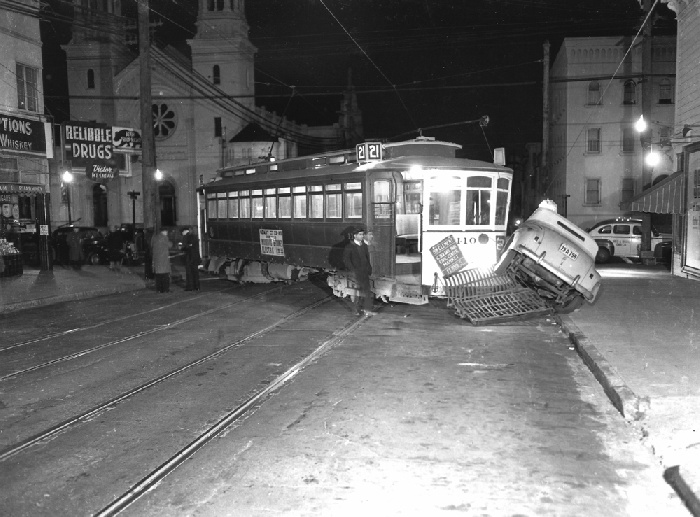 This accident occurred between an automobile and a 21-line streetcar at the corner of 8th & Geary, looking north on 8th Avenue on February 24, 1948. Star of the Sea Church at left and the building that housed the former convent at right both remain today. Reliable Drugs at left is now a wine/spirits store and the building at right was demolished in the 1980s for a new apartment building with ground-floor retail. 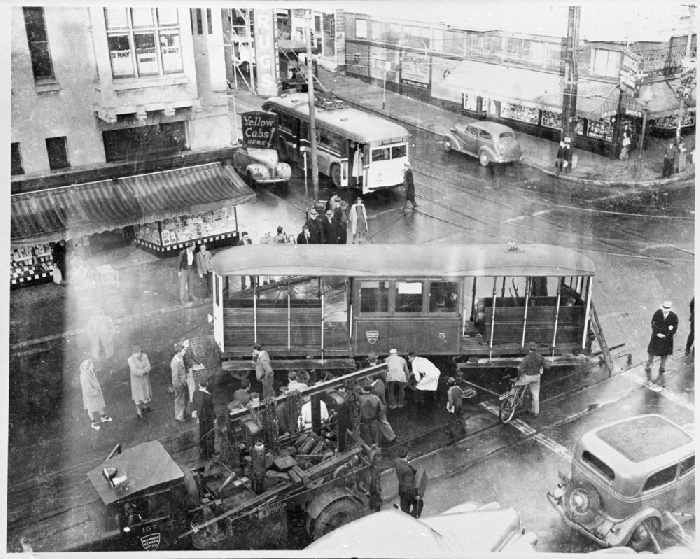 In its final year of operation (the line was shut down in April of 1941), a cable car from the Castro Cable line derailed at the corner of 18th and Castro in 1940. Ramsay’s Pharmacy at left eventually became the Elephant Walk (now Harvey’s) and the Star Pharmacy at right is now a Walgreen’s. Note the small MUNI electric trolley bus on the #33 line loading a passenger. 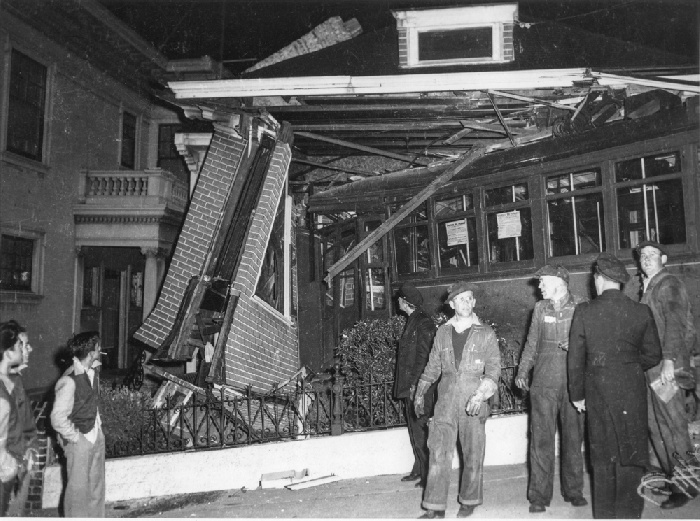 In this scene, a derailed streetcar crashed into the front of a house near 24th & Dolores Streets on the night of April 22, 1945. Bystanders and workers survey the wreckage and damage.

You may have heard by now that the Western Neighborhoods Project will be opening a temporary museum in the former Cliff House gift shop to exhibit some of the historic items that we purchased at the Cliff House auction. We hope to have our “Museum at the Cliff” open later this month. However, you don’t have to wait until the opening to visit the Cliff House and see one of the items we got. That item is the Totem Pole, which was purchased by us at the auction, but has remained on display at the Cliff House for anyone to visit. The totem pole that you see there now though is only “half” the story. 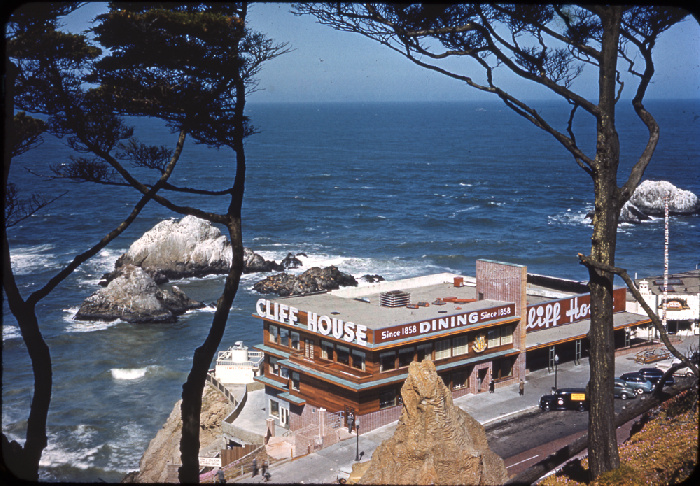 After George Whitney, Sr. bought the Cliff House in 1937, he did an initial remodel to get the place into shape as it had been closed for about 12 years at that point. A little over a decade later, he decided to really change the look and did an extensive remodel in the late 1940s. The “new” Cliff House had a moderne look with a red exterior and huge letters across the top of the building. As part of the new look, Whitney determined that a distinctive external feature was needed. The idea he hit upon was a totem pole, perhaps as an homage to the Ohlone peoples that once inhabited the area. 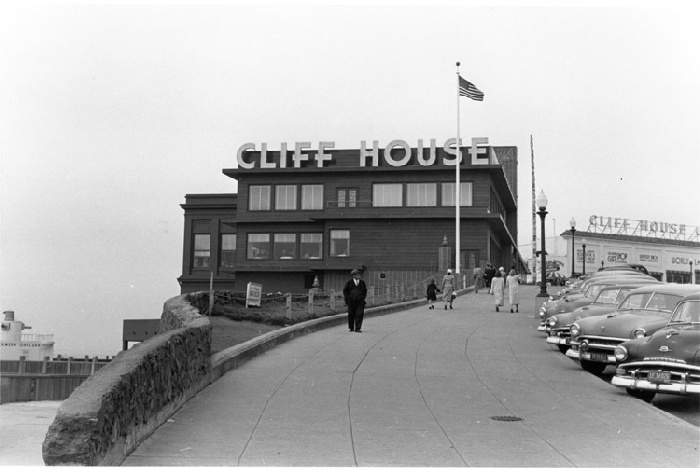 View north toward Cliff House with totem pole at right, circa 1951. (wnp4/wnp4.0679; Courtesy of a Private Collector)

Not content to simply buy a totem pole from somewhere, Whitney commissioned one from Chief Mathias Joe Capilano of the Squamish tribe in Western Canada to carve one for him. The Capilano name had long been prominent in Squamish society and is part of many place and street names in the Vancouver area. Capilano’s father was not a direct descendant of the original Ki-ap-a-la-nos and had merely assumed the name when he became chief. Capilano was a master totem pole carver whose work is still displayed in numerous places. 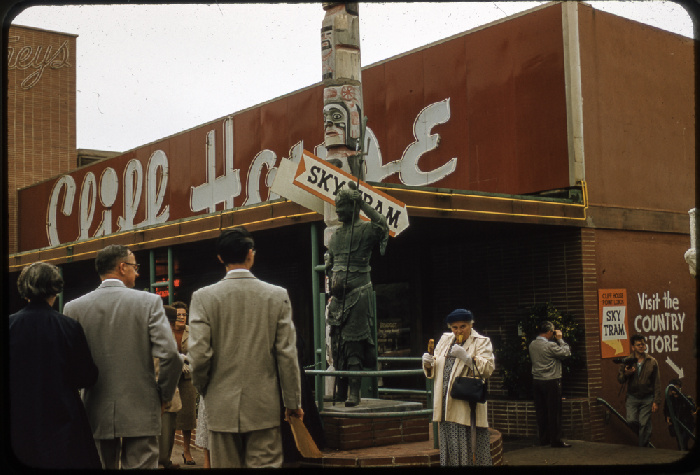 Close up view of bottom of totem pole at Cliff House and statue of Nio Sama, circa 1956. (wnp25.2243; Courtesy of a Private Collector)

The totem pole commissioned by Whitney was made from one long cedar log and depicted various members of the Whitney family. When Capilano finished the pole, it was shipped from Vancouver to San Francisco. Unfortunately, when it was ready to be shipped in November 1948, it was in the midst of a waterfront strike in San Francisco which delayed its arrival.1 When it finally got here, Whitney installed the 58-foot tall totem pole near the northeast corner of the Cliff House by the stairs to the lower deck. Never one to let a good marketing opportunity go by, Whitney claimed the totem pole was the largest in the world. It did tower over the Cliff House. 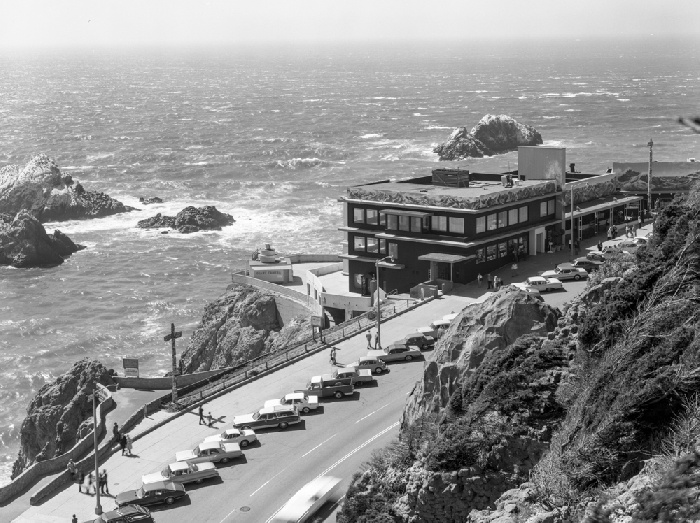 One issue, of course, with a 58-foot tall totem pole, was that no one could really see the top part of the pole. We aren’t certain that this was the reason, but around 1958, the totem pole was cut in half. The top half remained in the same spot that the totem pole had always been. The bottom half was moved down the hill from the Cliff House near where the sidewalk to the Giant Camera area split off from the main sidewalk. 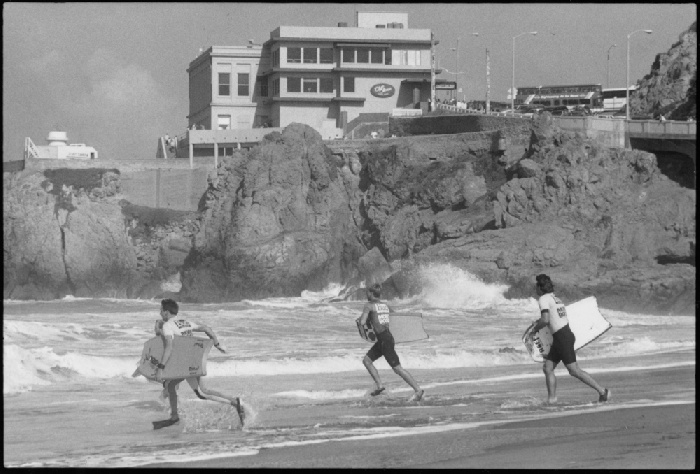 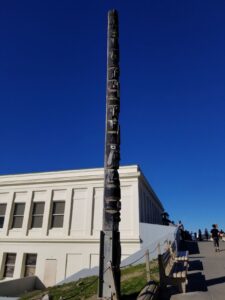 Despite the disappearance of the lower half of the totem pole, the upper half remained in place through and after the early 2000s Cliff House remodel. When the Western Neighborhoods Project acquired historic items at the Cliff House auction earlier this year, one of those items was the totem pole. We are looking at options on what to do with the totem pole to keep it on display. We are fortunate though, that for the time being, it can stay in place by the Cliff House thanks to a special use permit with the National Park Service. Whether it can remain there or will eventually need to be moved is up in the air currently. For the time being, you can visit it by the Cliff House.