San Francisco has had a remarkable number of movie theaters scattered about town over the years. From the early nickelodeons to today’s multiplexes, there has been no shortage of places to see films in the City. However, while theaters arose in virtually every part of San Francisco, there is one city block that has sported a remarkable number of movie houses through time. That is the 900 block of Market Street. Our OpenSFHistory collection includes numerous images of these theaters, so here’s ten of our favorites with some information about them from the great San Francisco Theatres page on blogspot.com. 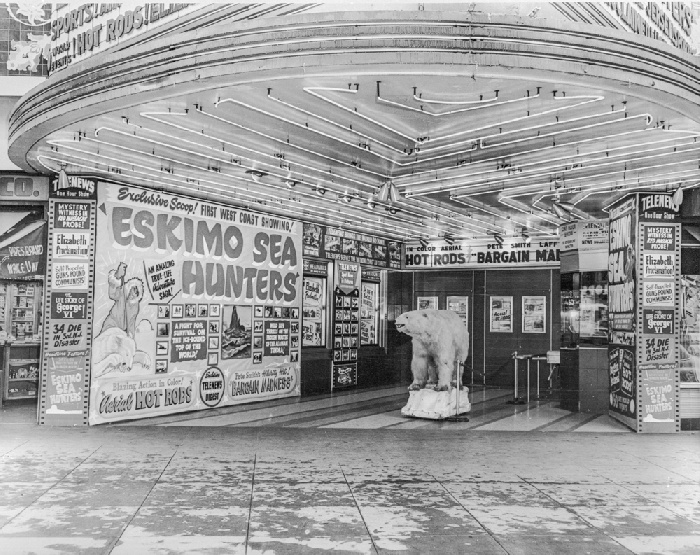 The Telenews Theatre opened on September 2, 1939 at 930 Market Street. Unlike conventional movie theaters, it was a place to watch newsreels, the first of 13 such “news” theaters for a national chain. The timing of the opening proved to be on the mark as World War II started in Europe the day before, creating a big interest for newsreels in the days before television provided such visuals. It wasn’t a big theater, holding just 399 people. It closed in August 1967 and the building was razed the following year. 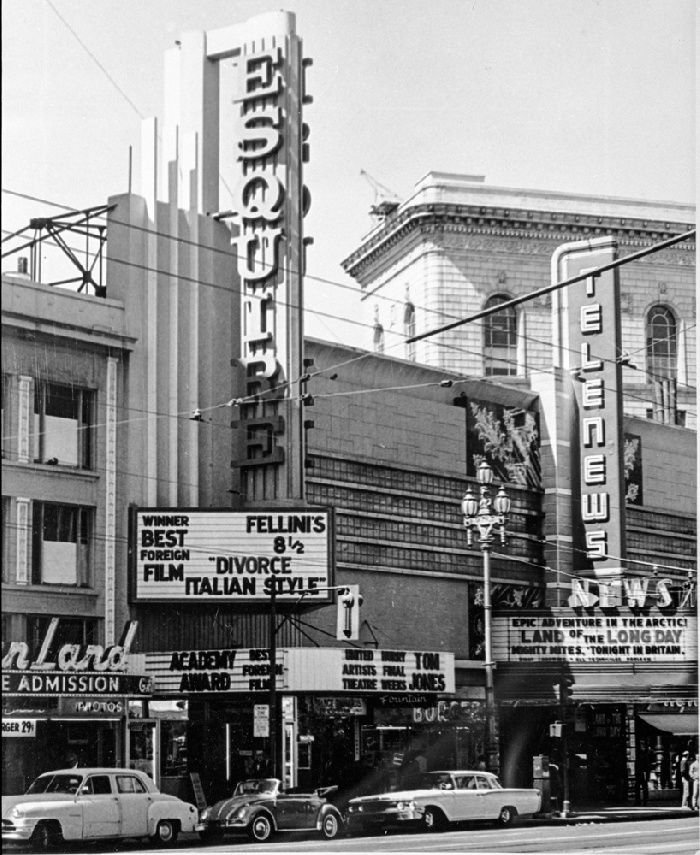 Right next door to the Telenews was the Esquire Theatre at 934 Market Street. It originally opened sometime around 1909 as the Market Street Theatre. From there, it regularly changed names. It became the Alhambra in 1917 and then the Frolic two years later. In 1923, the name was changed to the Cameo before being renamed yet again for actress Marion Davies in 1929. When the Blumenfeld Theatres organization took it over in 1940, they made the final name change to Esquire that year. It closed its doors on July 30, 1972 and was demolished as part of the BART/MUNI construction underneath Market Street. 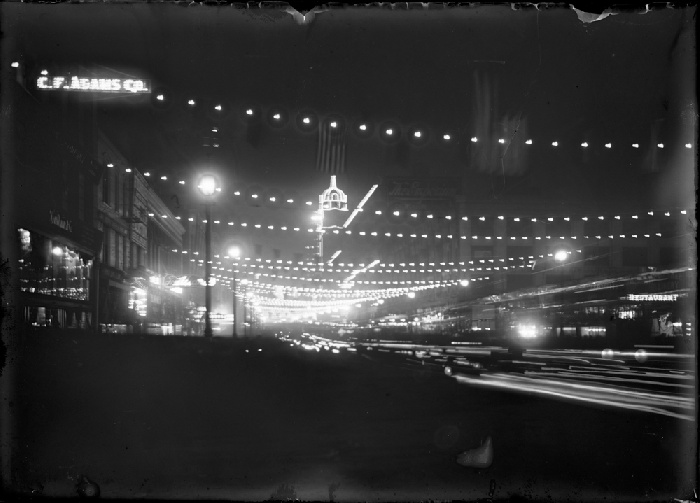 Across the street from the Esquire was a nickelodeon called the Elite Theatre at 935 Market Street run by Turner & Dahnken. While you can’t really see it in the October 1909 night shot of Market Street above, it was among the businesses on the right side of the image. It had opened by at least September 1909, but didn’t last long. It was closed and demolished by 1911 to make room for a bigger theater. During its short run, the Elite got into trouble with the censor board because they showed a silent short movie called the Banker’s Daughters. The plot description for that film recounts a home invasion heist plot, so it is unclear what the censor board found objectionable about it.

On the other side of the Esquire Theatre from the Telenews Theatre was the Pix Theatre at 938 Market Street. It opened on April 4, 1946 in a former retail space and was known as the Hub between 1950 and 1955, at which time it reverted to the Pix. Perhaps in an attempt to distinguish itself from the newsreels at the Telenews and blockbuster movies at the Esquire, it spent the bulk of its existence showing grindhouse movies. Towards the end of its run as a theater, it began showing adult, x-rated films. The Pix closed in December 1972 and the building reverted back to retail uses. 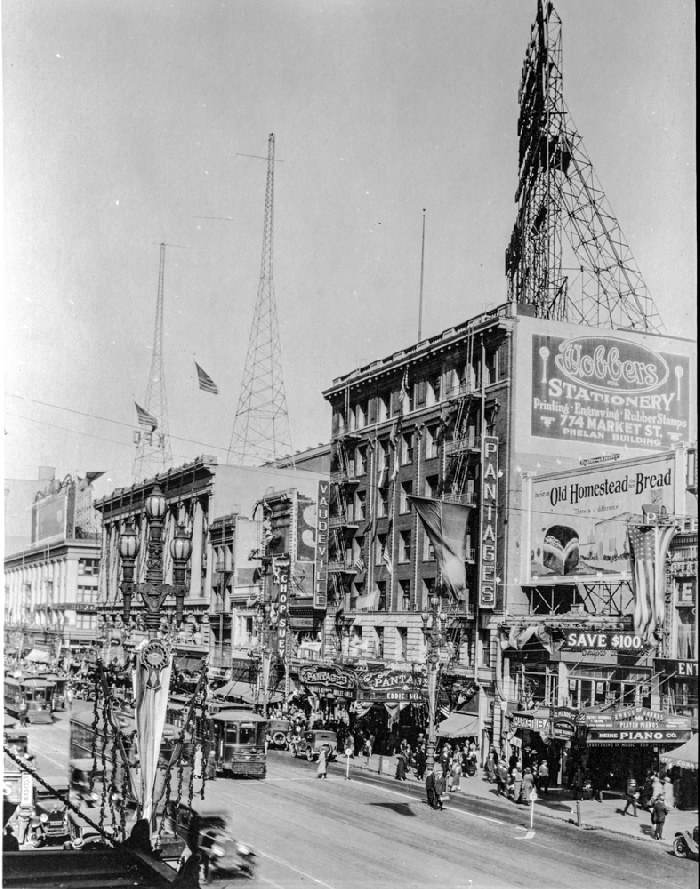 For a brief time in 1910-11, Turner & Dahnken operated a second nickelodeon next door to their Elite Theatre, called the Photo Theatre at 939 Market Street. They sold their leases in 1911 to Alexander Pantages, who razed both nickelodeons and built the grander, self-titled Pantages Theatre, which also had the 939 Market Street address. While the Pantages was primarily a theatre for vaudeville acts, it did also show movie shorts, such as the 10-part Fight and Win series about boxing. The large 1800-seat theater was closed on February 13, 1926 and Pantages opened up a new Pantages theatre several blocks away at 1192 Market Street. That theater would later be renamd the Orpheum. 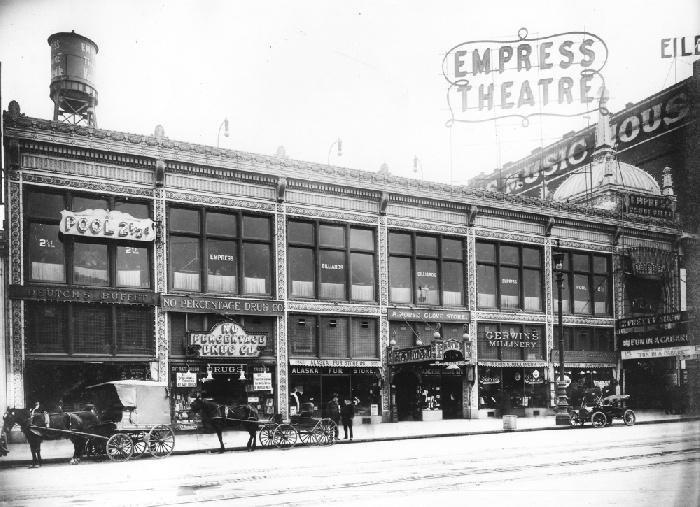 On December 4, 1910, the Empress Theatre opened at 965 Market Street. It started as a single screen with 1455 seats. Sid Grauman, the theater impresario who would later build the famed Chinese Theatre in Hollywood, took over the Empress in 1916 and changed the name to the Strand in 1917. After further ownership changes, the theater was renovated and renamed the St. Francis Theatre in 1925. 43 years later, the St. Francis would be split into two screens in 1968 with the downstairs still called the St. Francis and the upstairs becoming the Baronet. This may have proved a bit clunky as the two theaters became the St. Francis I and II in 1976. It would last until October 2000 before closing. The theater was later demolished in 2013 to make way for a shopping mall. 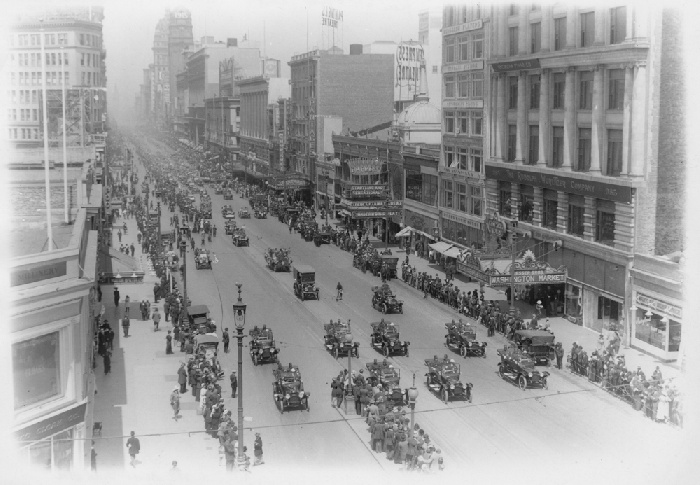 View east on Market from 6th with Pantages, Empress, and Empire Theatres on south side of street during PPIE parade, July 15, 1914. (wnp27.7153; Courtesy of a Private Collector.)

Just a few buildings down from the Empress, at 979 Market Street, was the Empire Theatre. It opened by 1913 and was in a storefront of the Hale Building. In the image above, it is located in the same building, but just to the left of the Washington Market storefront. You can see its sign just above the Washington Market sign at the left (east) side of the building. The sign was on a hinge that could swing out over the sidewalk. In 1918, the Empress became the Central Theatre or sometimes called the New Central Theatre. The small 250-seat theater closed by 1925 and has been retail space since then. 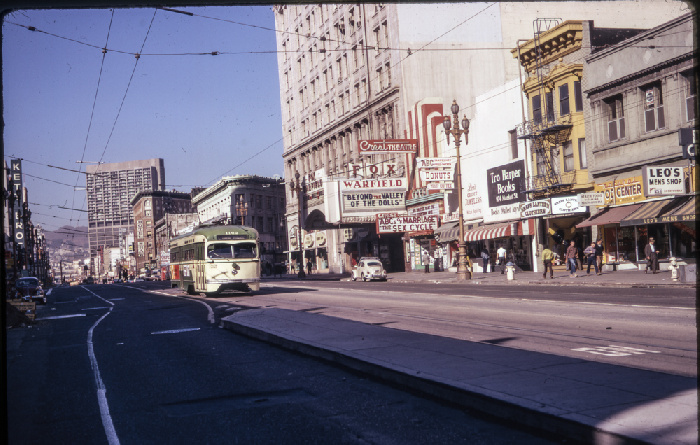 View west on Market near 6th with Warfield and Crest Theatres at center, August 1970. (wnp25.4305; Courtesy of a Private Collector.)

Across the street from the Empire was another small theater that opened in 1910 called the Maio Biograph. Located at 980 Market Street, it would be partially renovated when the Warfield was built next door in 1920. New management took over in 1923 and it went through a succession of names for awhile. It was very briefly called the Central Theatre in 1924 before being retagged the Circle Theatre later that year. A renovation in 1932 resulted in it becoming the New Circle Theatre. On December 14, 1939, it was renamed the Newsreel, probably taking advantage of increased public interest in newsreels due to World War II, much like the Telenews Theatre. It was purchased by Fox West Coast in 1949, upgraded, and simply called Cinema. On July 23, 1958, the name was changed again, this time to the Crest Theatre, the red building seen in the image above. 20 years later, it became the Egyptian Theatre in June 1978. That was short-lived and its final name in November 1981 was the Electric. At its biggest, the theater seated 326 people. Its life as a movie theater ended on February 15, 1994 and it thereafter became a strip club. 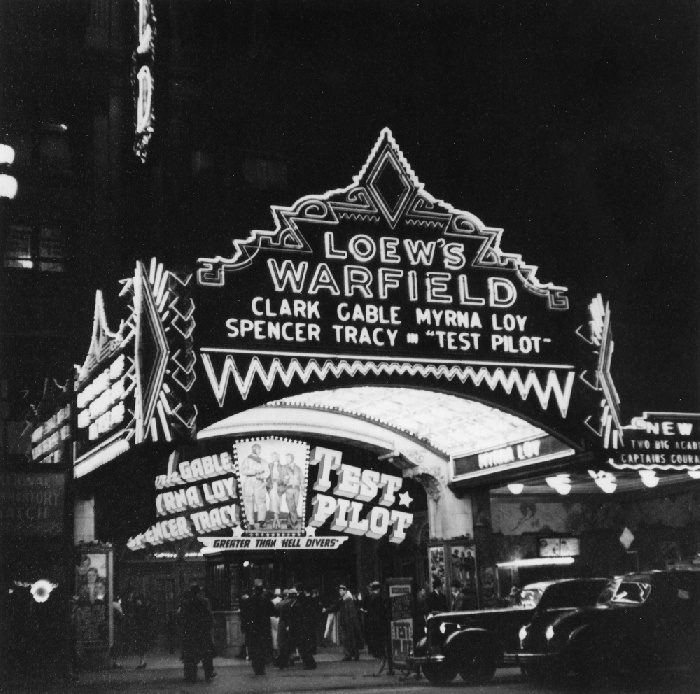 As mentioned above, the Warfield Theatre began construction in 1920 and officially opened at 982 Market Street on May 13, 1922. It was a large 2657-seat theater that dwarfed the Maio Biograph next door. Initially known as the Loew’s Warfield Theatre, it featured both films and vaudeville acts at the beginning, but became just a film theater in 1929. Later in the 1930s though, some stage shows returned and then big band shows became popular there in the 1940s. Movies continued to be shown there through 1979, including a short run of Star Wars in 1977 that George Lucas’ company thought was one of the best presentations of the film. Since 1979 though, the Warfield has been primarily a concert venue. Unlike the other theaters on this block of Market Street though, the Warfield still remains today. 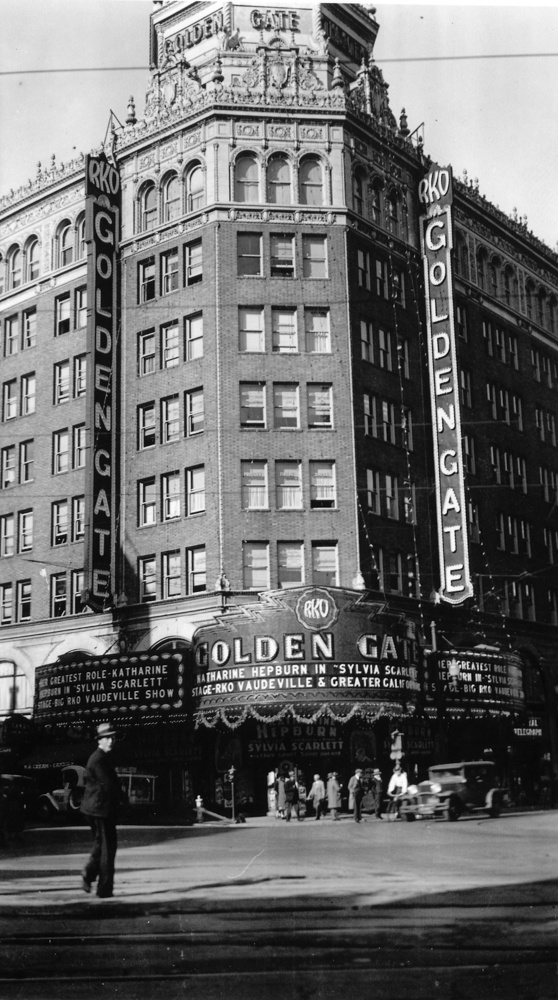 Over the last century plus, the 900 block of Market Street was dominated by movie theaters, large and small. Today, there are no films being presented on that block, though the Westfield San Francisco Centre has a multiplex in the 800 block of Market. On other parts of Market Street, there were at least 24 more movie theaters at various times, with another cluster in the 700 block. We will likely never see such a confluence of houses of film again since streaming has made everyone’s home a theater today.