In a speech to Western ambassadors at the Polish embassy in Moscow on November 18, 1956, Soviet First Secretary Nikita Khrushchev famously said: “About the capitalist states, it doesn’t depend on you whether or not we exist. If you don’t like us, don’t accept our invitations and don’t invite us to come to see you. Whether you like it or not, history is on our side. We will bury you!” In the end, history may not have been on the communists’ side with the Soviet Union eventually disintegrating into numerous sovereign nations. However, despite the implied threat, whether real or not, in his “we will bury you” statement, the West nevertheless did issue an invitation to the communist leader. This resulted in the first state visit by a Soviet leader when Khrushchev came to the United States in 1959. As part of his American tour, Khrushchev visited San Francisco in September 1959. 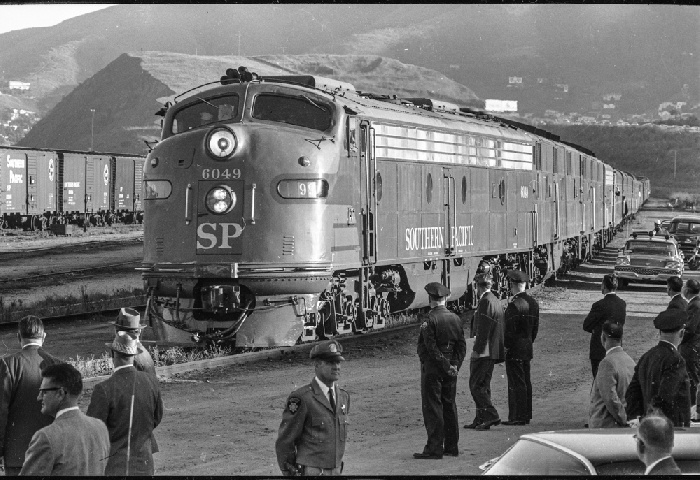 The early part of Khrushchev’s tour was on the East Coast in Washington, D.C. and New York. Then he headed for California. After spending some time in Los Angeles, including the obligatory meal with Hollywood stars, Khrushchev got on a train and headed north. The special luxury train arrived at the Southern Pacific Bayview Yard at approximately 6:10 p.m. on September 20, 1959. 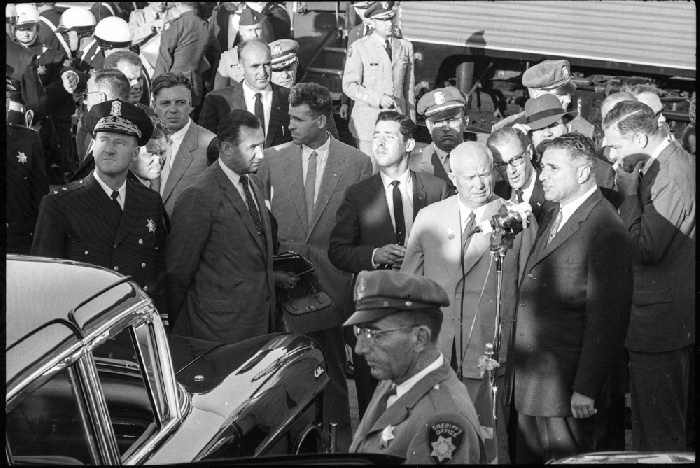 Mayor George Christopher was at the train yard to greet the Soviet First Secretary. The Mayor had a warm welcome for Khrushchev and a hug and bouquet of flowers for his wife, Nina.1 The public was not permitted at this welcoming, but a small official contingent was present to greet Khrushchev. Mayor Christopher delivered short remarks, stating that the Soviet Premier “is not here to take issue with us and we are not here to take issue with him.” The Mayor added that he “wanted [Khrushchev] to know that San Francisco, being a cordial city, being a city of hospitality and a city of international fame for this hospitality, will accord to His Excellency the fullest hospitality of our city.” 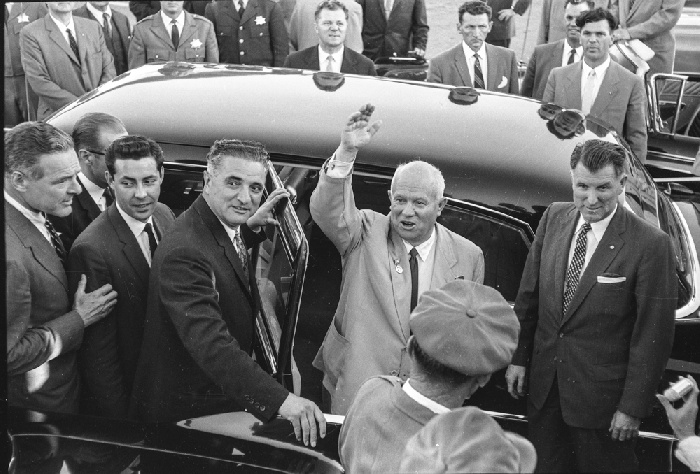 Nikita Khrushchev waves to greeting contingent with Mayor George Christopher to his left, September 20, 1959. (wnp28.0333; Courtesy of a Private Collector)

After Christopher’s remarks, Khrushchev addressed the gathering. He replied, “I am grateful to you for this welcome. I am grateful to all the citizens of San Francisco who correctly understand the significance of my visit as guided by the desire to establish friendship and relations of love between our two peoples.” When the speaking was done, the gathered officials and Soviet visitors got into a motorcade of Cadillacs and headed for Nob Hill. 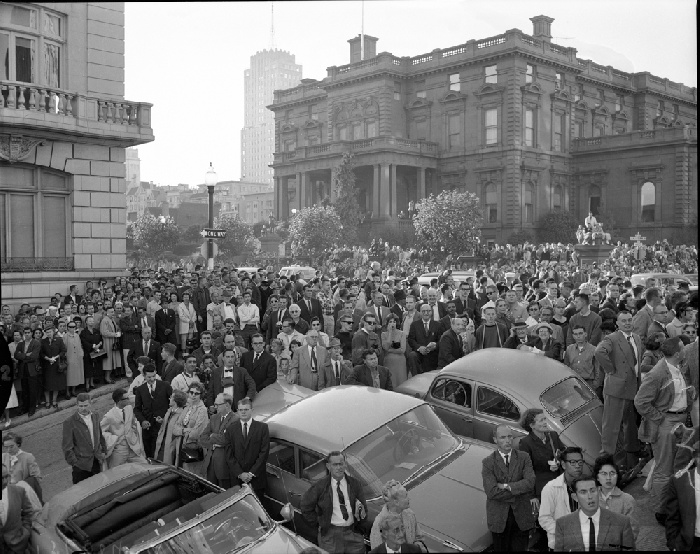 Awaiting Khrushchev’s arrival was a crowd of 10,000 people on Nob Hill. It was a friendly crowd that cheered and clapped for him upon his appearance at the Mark Hopkins Hotel. Khrushchev would be staying in the Royal Suite at the Mark Hopkins,2, but first he delighted in the adoring crowd. He slipped away from his security contingent several times to shake hands with spectators. After heading upstairs to his 16th floor suite, he stepped out to the balcony to wave some more to the crowd. Then Khrushchev headed for dinner with American labor leaders that U.S. government officials were specifically not invited to. 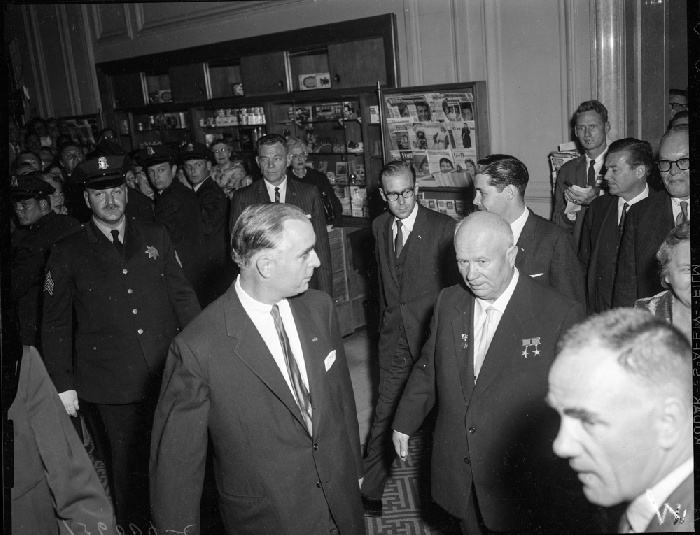 The next day, Khrushchev did some sight-seeing and he started by making a surprise visit to the Fisherman’s Wharf area.3 Instead of checking out the new Marina Safeway store, he dropped in on the International Longshoremen’s and Warehousemen’s Union Hall where he exchanged his fedora for a longshoreman’s white stevedore’s cap. In brief remarks, he asked if he could call the union men “comrades” and received a big cheer from the assembly. They cheered further when he told them that peace was not enough, but “enough work and a good wage” was also necessary. Khrushchev clearly knew his audience. 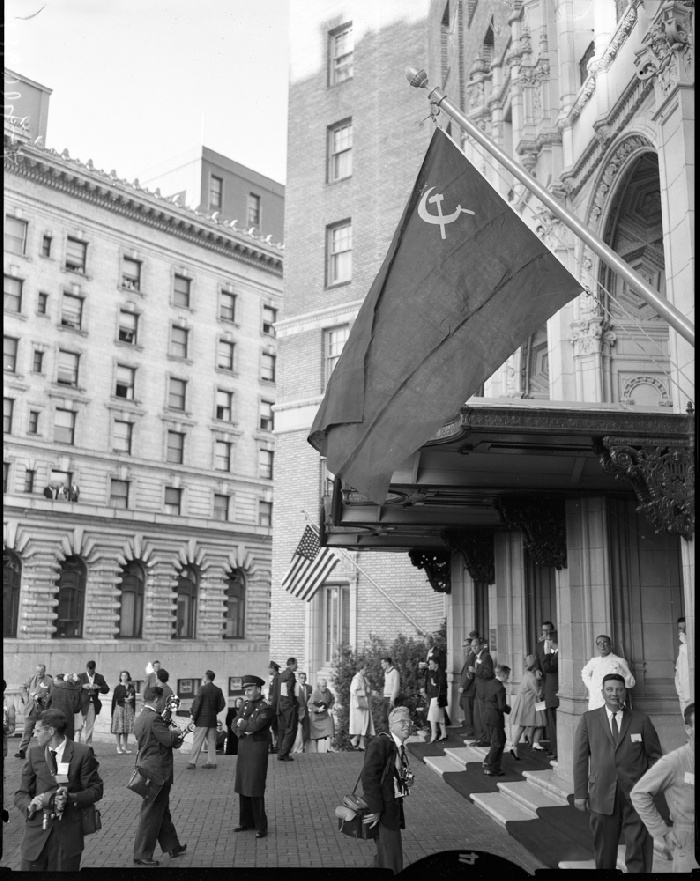 After the union visit, Khrushchev headed for Pier 43 and a ride on a Coast Guard cutter for a bay cruise. Then it was on to San Jose for a tour of an IBM plant.4 He apparently was more interested in their self-service cafeteria–where he lunched on Southern fried chicken–than he was in their computer technology. On the return to San Francisco, he made another unscheduled stop, this time at the Quality Foods supermarket in Stonestown. Word got out quickly though, and the store was soon crowded leading to some fights and display wreckage. Khrushchev took it all in stride, shaking hands with staff and customers. 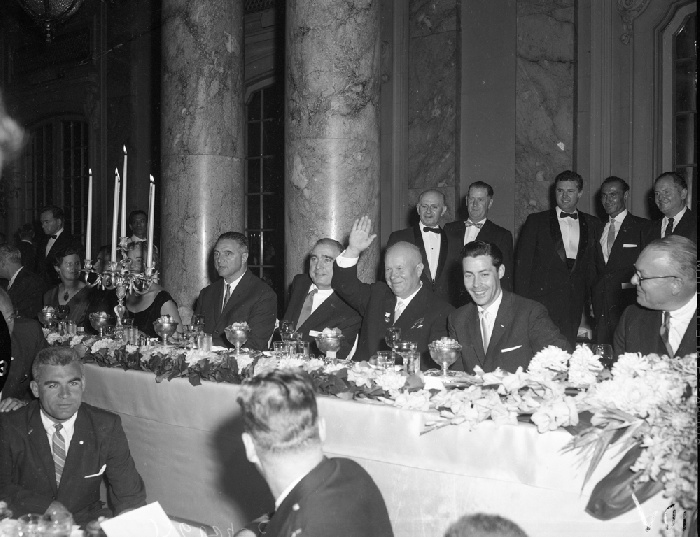 Back in the City, the Premier attended another dinner, this one at the Sheraton Palace Hotel with some 3000 guests in several ballrooms that included California governor Edmund G. Brown.5 Khrushchev kept his remarks light, citing some Russian proverbs, an old song, and even the New Testament. For his part, Governor Brown expressed his hope that “increasing knowledge of each other’s way of life will tend to reduce the exchange of hackneyed cliches about communism and capitalism.” Mayor Christopher and U.S. Ambassador Henry Cabot Lodge also spoke.

With that, Khrushchev’s Bay Area sojourn was over. He flew out of San Francisco on Tuesday morning, September 22, 1959,6 headed for Iowa, Pennsylvania, and Camp David to complete his American expedition. His time in the City went smoother than some other stops on the tour, particularly Los Angeles where the mayor had angered the Soviet leader.7 Perhaps as a result, Khrushchev described San Francisco as the best city he visited in the U.S. We don’t disagree with him on that assessment.