Playland at the Beach was previously known as Chutes at the Beach because its premiere attraction was the Shoot the Chutes water ride. Chutes at the Beach was the brainchild of Arthur Looff and John Friedle who organized the various concessions near the beach into an amusement park. Although the Chutes was the star, the park built some roller coaster rides to complement it. The first ones were the Bob Sled Dipper, where riders rode one in front of the other, as if in a bobsled, through a series of dips then down “a precipitous cliff.”1 The other was the Figure 8 Coaster, a scenic railroad type ride that was longer and slower than the Bob Sled Dipper. However, these rides were about to be eclipsed by a new feature attraction. 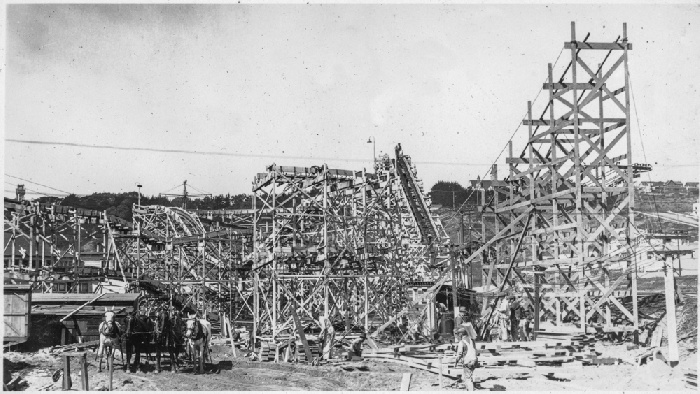 In 1922, bigger, faster–scarier–rollercoasters were becoming the “in” thing. Across the Bay in Oakland, Idora Park opened a rollercoaster with large dips of up to 100 feet that they called the Big Dipper.2 So in 1922, Looff and Friedle decided that Chutes at the Beach needed a rollercoaster upgrade. Although the Figure 8 Coaster was only a few years old, they decided to demolish it and build their own Big Dipper. 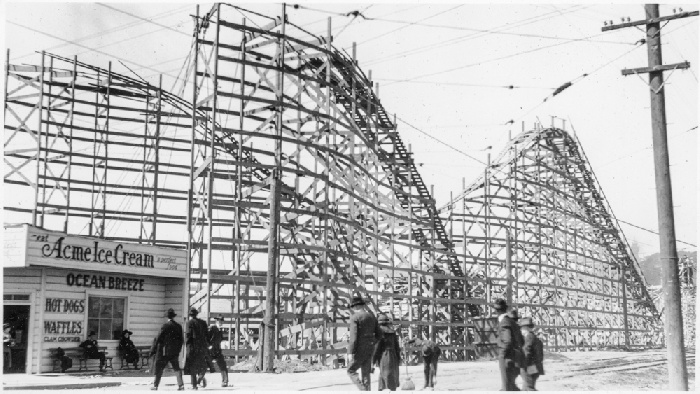 Although Looff claimed to have designed the Big Dipper, it was likely a creation of the Prior & Church firm that built the Bob Sled Dipper.3 It was built in a rapid two months and was opened in September 1922 in an area around Fulton and La Playa. Looff may not have designed the Big Dipper at Chutes at the Beach, but he did later build the Giant Dipper at the Santa Cruz Beach Boardwalk which opened in May 1924 and still exists today. 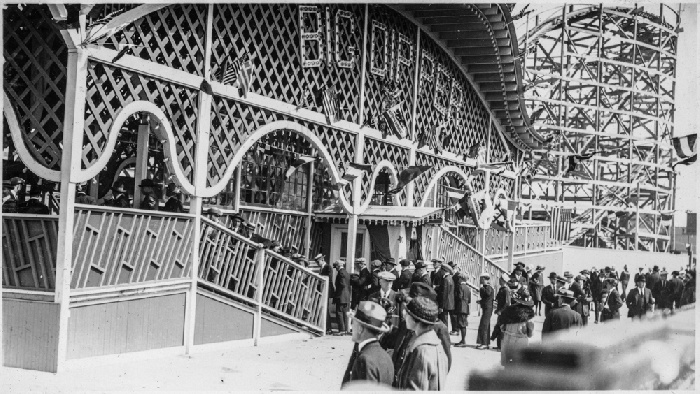 The Big Dipper was a hit, but the roller coasters of the time were not quite as safe as today’s rides. On July 23, 1923, a man named Frank Sylvester was thrown out of his seat and suffered severe injuries.4 On August 17, 1924, Peter Biggio was killed when he was thrown off and fell 30 feet.5 Another woman broke her legs when she stood up and jumped from the car near the bottom of a drop. 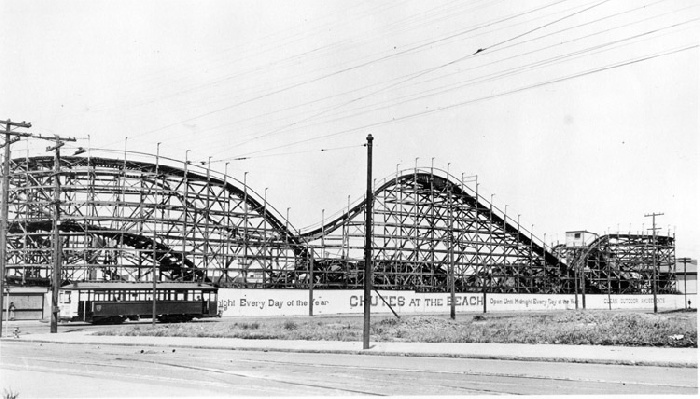 Big Dipper roller coaster from Fulton near 48th Avenue, circa 1925. (wnp4.1014; Courtesy of a Private Collector)

George Whitney, who had opened a few concessions beginning in 1923, started buying more concessions and was later joined in those enterprises by his brother Leo. Because of the various lawsuits, Friedle, who had previously bought out Looff, sold much of his interest in Chutes at the Beach to the Whitneys. However, he kept his interest in the Big Dipper and several other concessions. Friedle then left for Germany. 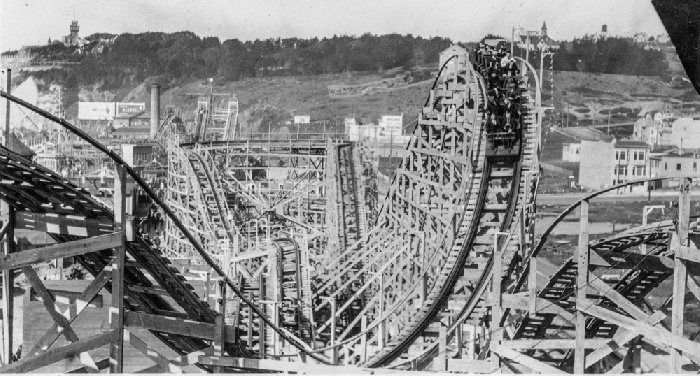 The Whitneys renamed the park Whitney’s at the Beach sometime around 1930, but it was commonly known and advertised as Playland at the Beach. They finally acquired the Big Dipper in 1936 and it was the park’s big money-maker through World War II and thereafter. In 1945 alone, some 750,000 people got their thrills on the Big Dipper.6 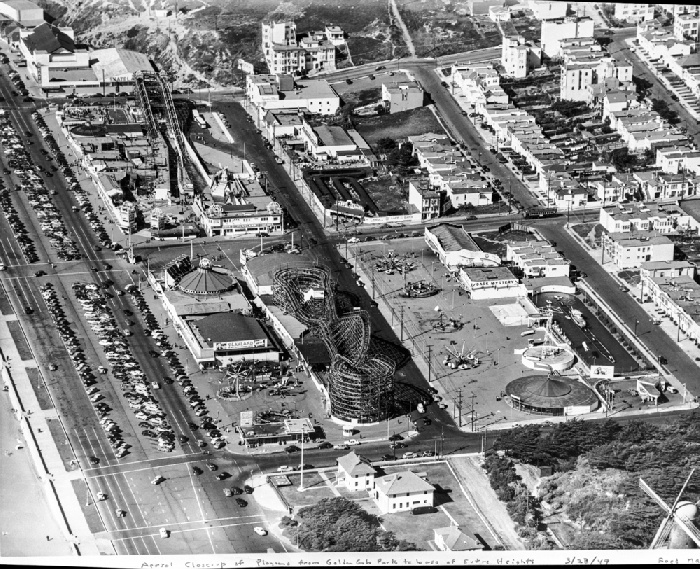 Despite fixes and upgrades over the years, accidents still occurred at the Big Dipper. In 1945, a sailor on leave stood up and was killed when his head hit a support. On February 6, 1953, Jack Williams, a mechanic, was working near the top of the Big Dipper when he was hit by car and dragged down the “big dip.”7 Williams lost his right foot and suffered severed damage to his left leg. In 1955, the Big Dipper failed its city safety inspection for the first time.8 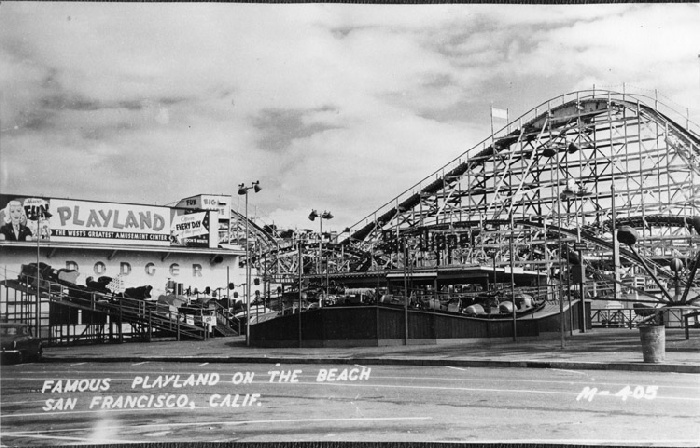 Whitney decided that the Big Dipper’s best days were behind it. On October 12, 1955, demolition began on the old rollercoaster. It would be replaced by the Alpine Racer ride, which was a copy of a ride at the Santa Cruz Boardwalk called the Wild Mouse. Perhaps because of the loss of the Big Dipper, Playland’s status as a San Francisco destination spot waned. 17 years later, the entire amusement park would be gone. For 33 years though, the Big Dipper thrilled kids and adults as the star attraction at Playland.