Today is the 115th anniversary of the 1906 earthquake and fire that destroyed much of San Francisco. In the aftermath of the quake, several hundred thousand people found themselves homeless. To deal with this situation, refugee camps were erected in parks and open spaces around the City. This week’s Outside Lands Podcast provides details of the refugee camps in Golden Gate Park, so we’re taking an OpenSFHistory top ten look at other refugee camps.

In between Fort Mason and the Presidio was a large flat area that would later become part of the Marina District. Army tents, previously used to house soldiers arriving in San Francisco before being shipped out to war in the Philippines, were set up to house the earthquake homeless. This was one of the largest refugee camps to arise. A short distance away in Lobos Square–today’s Moscone Playground area–another Army camp for refugees was set up. 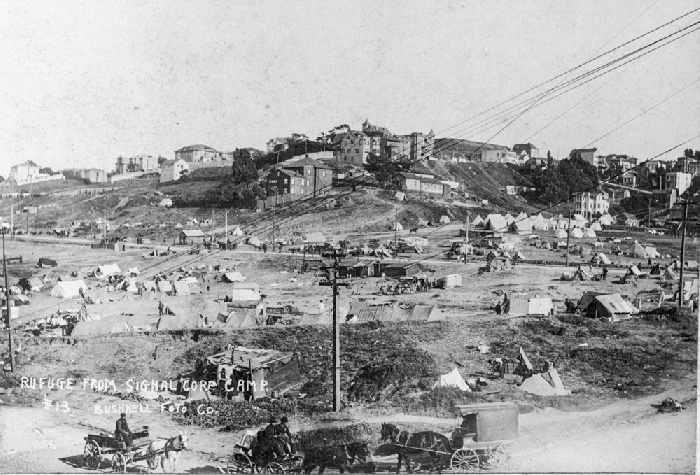 On the other side of Fort Mason, things were not as organized. Between the fort and Russian Hill, earthquake survivors began camping out in the low-lying, largely sandy grounds. You don’t see the Army-precision rows of tents here as there were to the west of the fort. The survivors were simply trying to make do as best they could under the extraordinarily difficult circumstances. 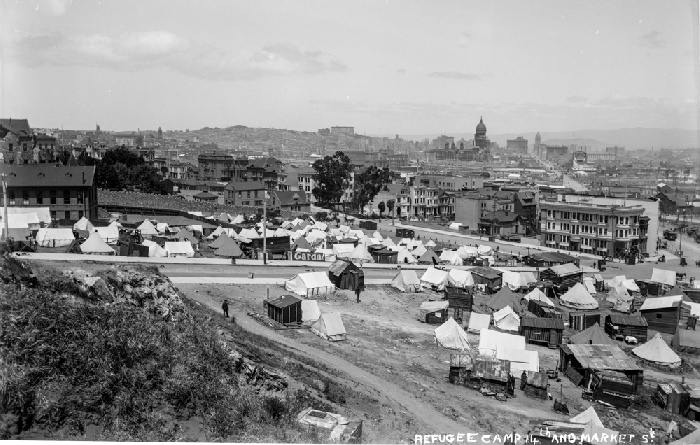 At the bottom of Mint Hill, a refugee camp sprang up just on the edge of the destruction. This is also a less organized camp with assorted tents and quickly built shacks to shelter folks. From here you can see the swath of destruction, including the remains of the original City Hall. In the distance at the center of the image, you can see Nob Hill where the Flood Mansion, the only mansion in that area to survive the earthquake and fire, and the then almost complete Fairmont Hotel stand. The Fairmont suffered much interior damage, but the outer structure survived. 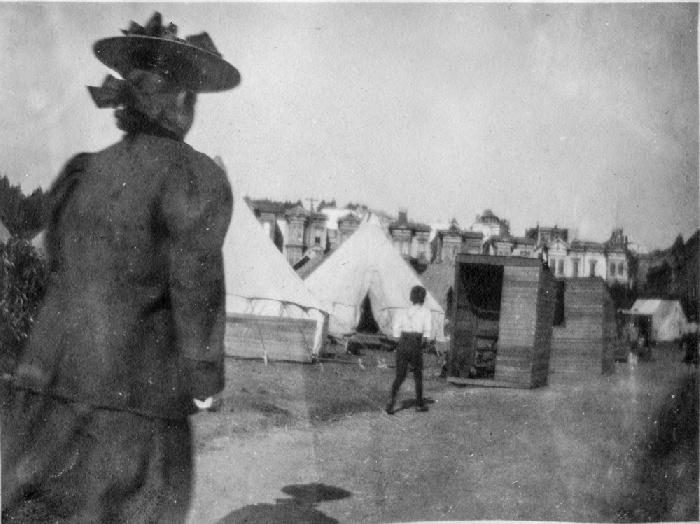 To the west of Mint Hill, another refugee camp arose in Duboce Park. A little over 20 years later, one end of the Sunset Tunnel would begin here, but in 1906, Army tents filled the park. Besides housing, the refugee camps had to provide food and latrines. Here, a boy, with a woman behind him, approaches one of the outhouses constructed for use by the refugees. Given a lack of space, these outhouses were placed close to the living area. Likely, the smell was not pleasant there. 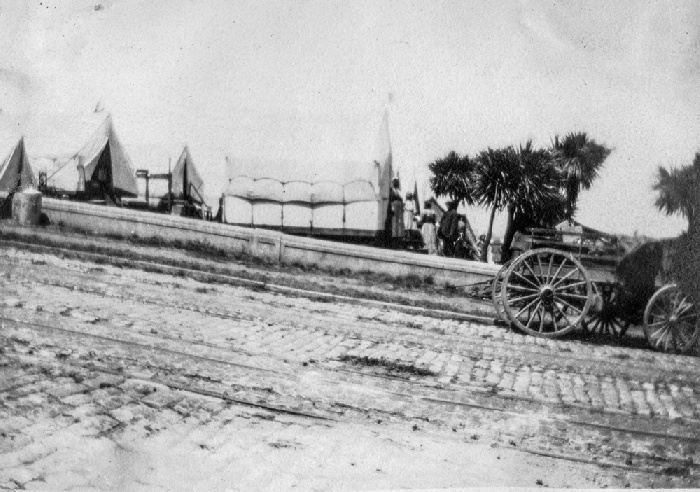 With so many displaced people, San Francisco had to make use of all available green space, including parks with hills. Over in Alamo Square, they solved the angled ground problem by essentially building an undercarriage for the tents to keep them level. 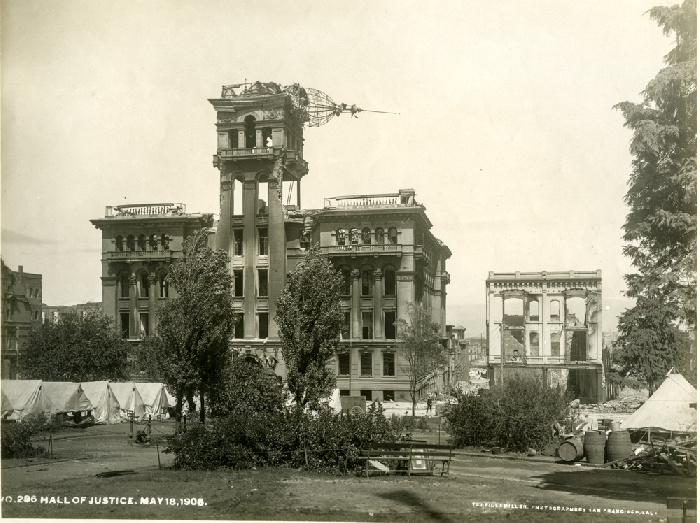 Portsmouth Square was the original center of the San Francisco. Literally, the city’s boundaries at the time of its 1850 incorporation were defined as the waterfront to the north and east, and two miles to the south and a mile and half west of Portsmouth Square. Of course, this put Portsmouth Square in the middle of the conflagration that burned the City after the earthquake, taking out, among thousands of other buildings, the Hall of Justice seen here. Although the fire took out the buildings around the park, Portsmouth Square escaped largely unscathed. So after the fire was put out, Army tents for refugees went up. 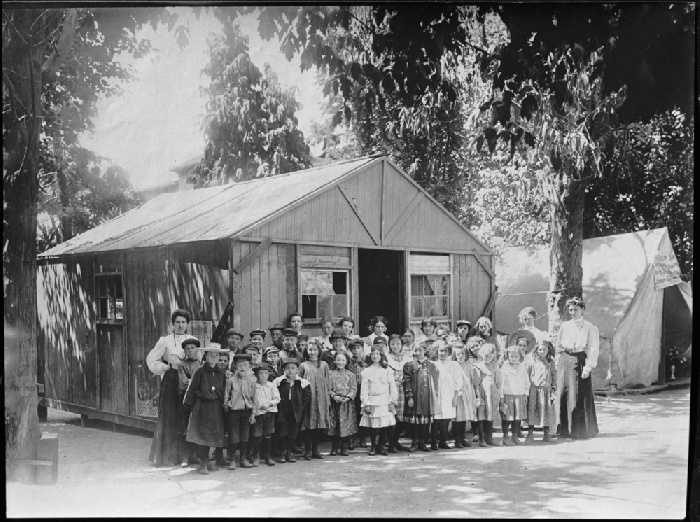 Able-bodied men who no longer had jobs were often conscripted to perform manual labor cleaning up the rubble. Back in the camps, women were cooking, cleaning, and taking care of the children, hard jobs made even harder by the circumstances. In some camps, women set up schools for the children. In Jefferson Square, this appears to be a ramshackle, one-room schoolhouse, probably built quickly. The children appear to be a variety of ages and the schoolhouse too small for the entire group, so perhaps different ages used the school at different times. 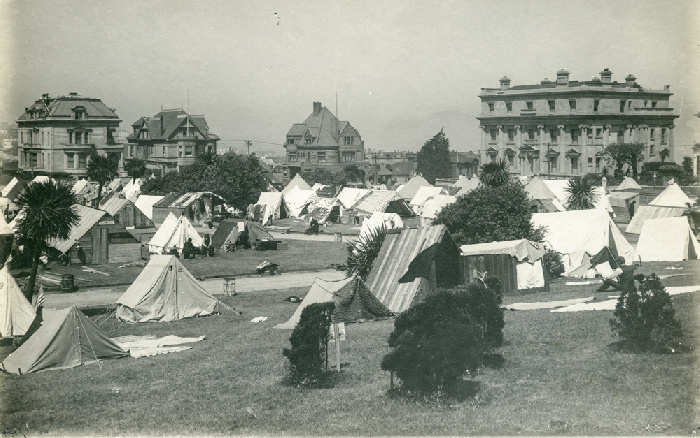 Lafayette Park lay just to the west of destruction zone. Thus, the Irwin Mansion, seen here at right, and the other houses around the park survived the fire. Inside the park, another makeshift refugee camp settled in with a variety of tent sizes and styles. 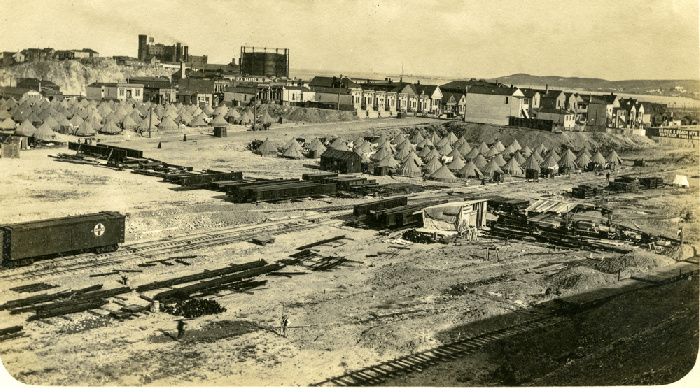 The southeastern part of the City was then, and is now, largely an industrial area. Piers, the Santa Fe Railroad yard and the Spreckels Sugar factory could all be found in the area. Irish Hill and Minnesota Street sprouted small homes and cottages for the local workers. After the earthquake, a camp was set up in the Dogpatch neighborhood. Today, Interstate 280 runs right through this area. 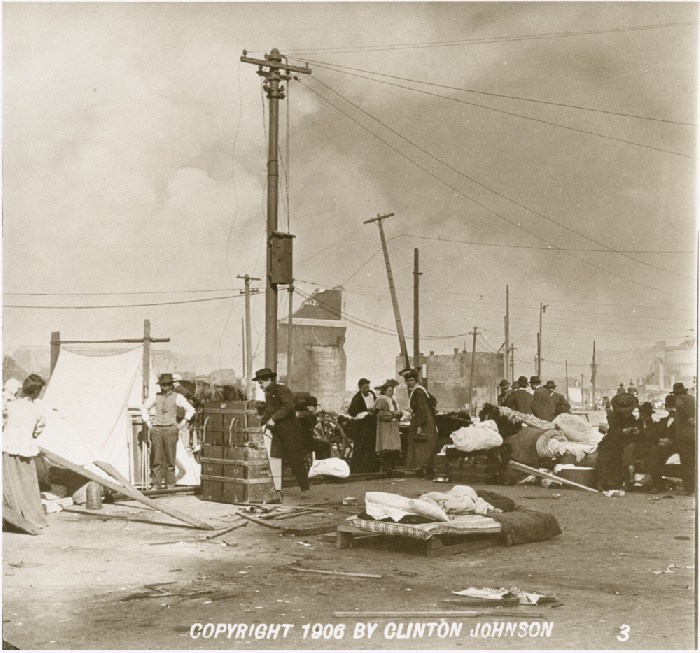 Thanks to the swift work of Navy fireboats, San Francisco’s eastern waterfront was largely saved from fire damage. Here you see the newly homeless taking advantage of the safe zone near the Ferry Building. They’ve brought tents, mattresses, trunks, and other personal possessions with them. Behind them, smoke from the fires is thick in the air.

If you listen to the Podcast mentioned above, you will learn that Golden Gate Park had three refugee camps as well. We have over 200 refugee camp images on OpenSFHistory from around the City if you wish to see more.