In 2010, the San Francisco Giants won their first World Series since the franchise moved from New York. To celebrate, San Francisco held a massive victory parade that started at Washington and Montgomery Streets, headed down to Market Street, and ended at the Civic Center. Two more championships and parades followed in 2012 and 2014. Although 2010 was the first title won by the Giants, it was not, however, their first parade in San Francisco. That happened 52 years earlier. 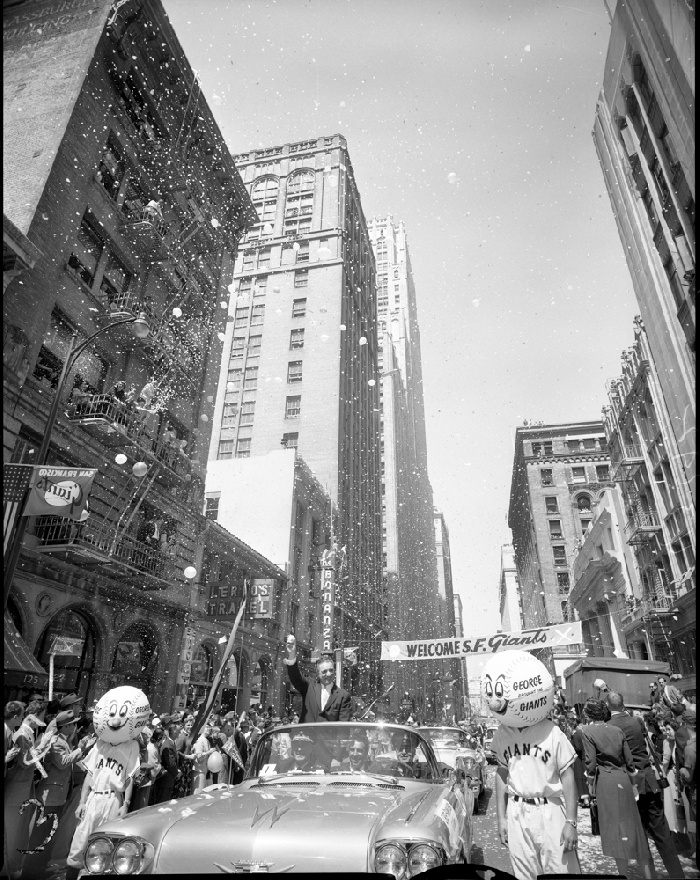 Before 1958, there was no major league baseball in San Francisco. Nevertheless, there was a long baseball tradition here with the San Francisco Seals and Mission Oaks minor league teams. After the 1957 baseball season, however, New York Giants owner Horace Stoneham announced that the Giants would be moving to San Francisco. Their bitter rivals, the Brooklyn Dodgers were moving to Los Angeles at the same time. In a word, San Francisco was elated. 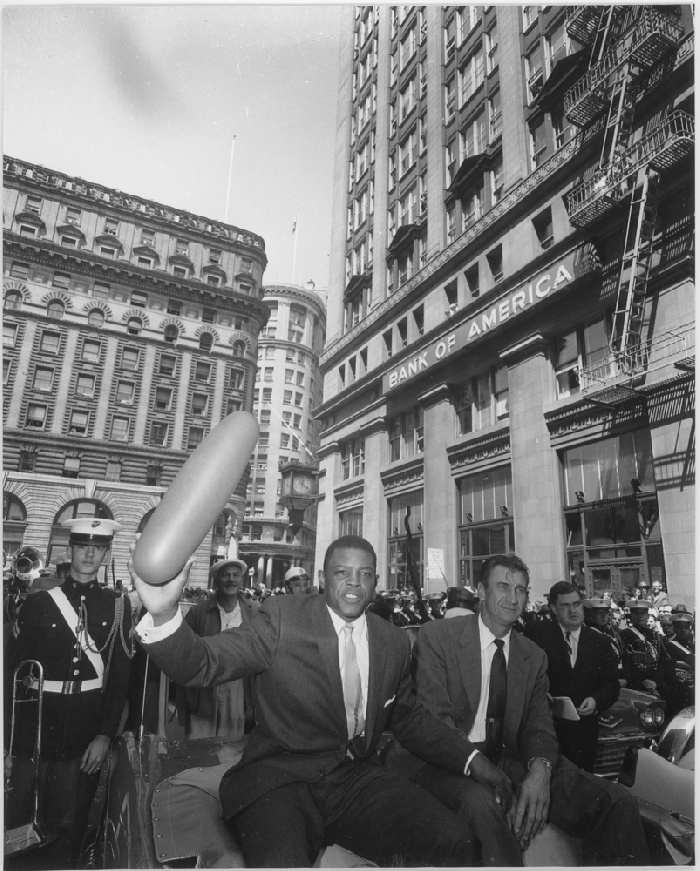 San Francisco was so excited about the arrival of the Giants, it was not about to await a World Series victory to throw them a parade. Thus, the very first Giants parade occurred before the team had even played a game here. On Monday, April 14, 1958, San Francisco held a welcoming parade for the Giants and turned out en masse for it.1 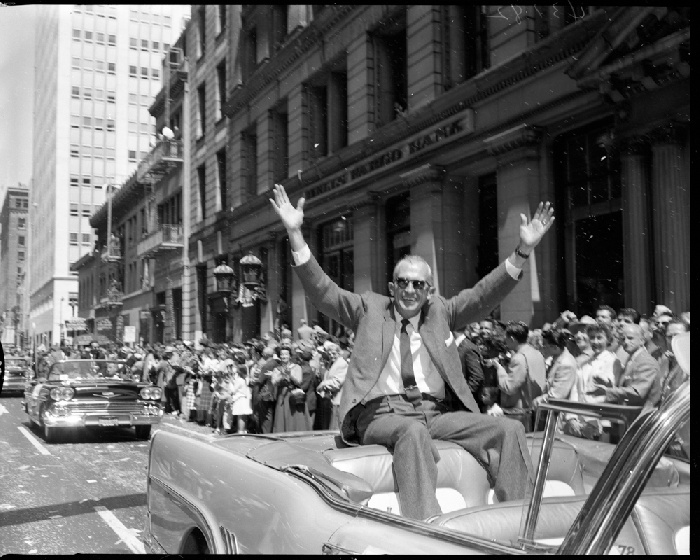 The parade started at Seals Stadium, which was to be the temporary home of the Giants until a new stadium was constructed.2 From there, it headed south on Potrero Avenue before turning west onto [then] Army Street. The parade turned north again on Mission Street, made a jog onto South Van Ness, and headed east down Market Street. At California Street, the parade made a sharp left and then another left onto Montgomery, before ending at the Sheraton Palace Hotel at Montgomery and Market for a welcome luncheon. Hundreds of thousands of people lined the parade route. Supervisor Francis McCarty was the emcee for the luncheon which featured remarks from Mayor Christopher, Stoneham, baseball commissioner Ford Frick, and National League president Warren Giles. The following day, the Giants opened their season against the Dodgers. Ruben Gomez pitched a 6-hit shutout to defeat their hated rivals, 8-0. San Francisco finished the season in third place in the National League. 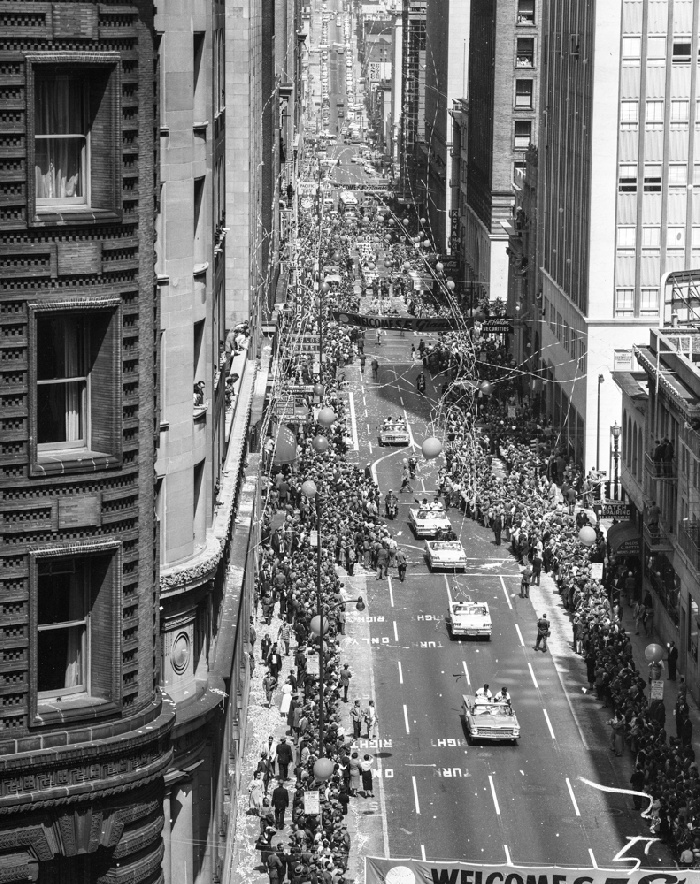 Not content to welcome the Giants once, San Francisco threw a second welcome parade for the team before the 1959 season. This parade started near where the prior season’s parade ended, at California and Market Streets.3 From there, it did the triangle up California to Montgomery, then down to Market. Then the parade headed west down Market to the Civic Center where it ended at City Hall. 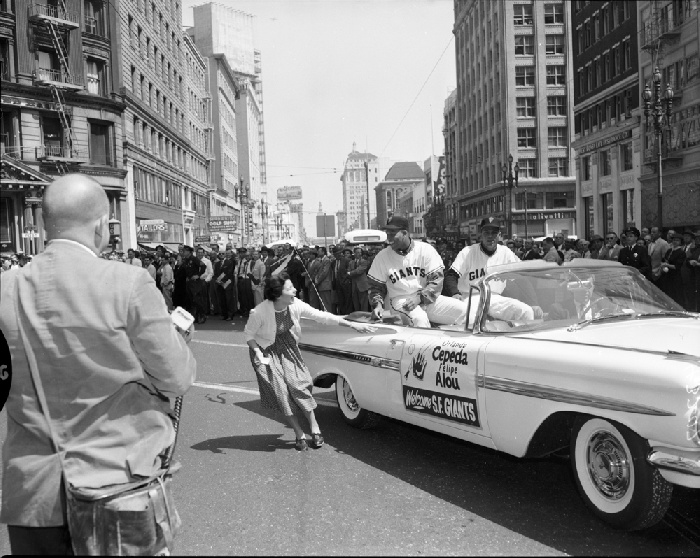 Somebody had the bright idea to give the players “balls” to throw into the crowds from their cars.4 The “balls” were in fact leftover Christmas tree snowballs, but that did not matter to the crowd. Fans scrambled over and pushed one and other to get their hands on a ball tossed by a genuine Giant. After pitcher Johnny Antonelli tossed a ball that made a large curve, a fan shouted “boy Johnny, if only you could thrown ’em like that in a game.” Antonelli grinned in response. 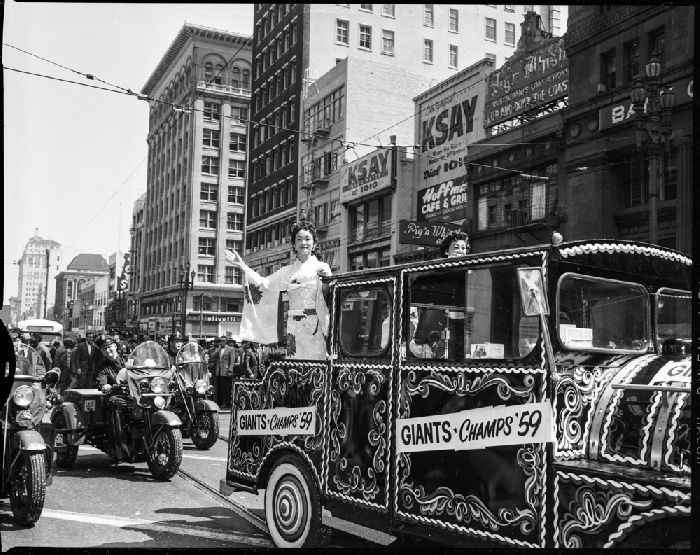 While there was a lot of championship talk during the 1959 parade–the Giants had acquired pitcher Sam Jones, who had led the league in strikeouts in 1958, from the Cardinals–the reception was muted in comparison to the year before. Only about 50,000 people attended, far less than the previous year’s festivities. The following day, the Giants lost their home opener to the Chicago Cubs. They would finish the year in 3rd place for the second consecutive season. After two years of season-opening welcome gala festivities, the City was done with Giants parades, at least until the team brought home a championship in 2010. With the 2021 baseball season just beginning, there is hope once more, however remote, of another Giants parade to come.