As was noted by Western Neighborhoods Project founder Woody LaBounty in a blog post several years ago, our OpenSFHistory collection contains photos from tourists on vacation in our great City. We don’t know these people, but we can walk in their footsteps as we follow along on their travels. One such set of photos are of a sailor doing largely tourist-y things back in the 1930s. 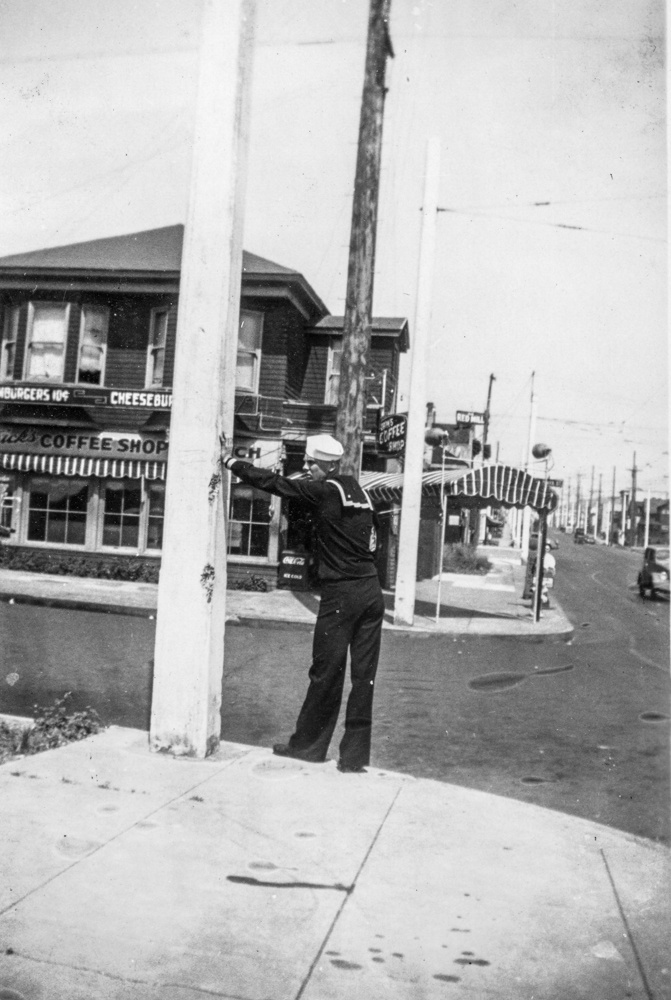 Sailor standing at corner of Judah and La Playa across from coffee shop, circa 1937. (wnp27.0199; Courtesy of a Private Collector)

With numerous military bases around the Bay, San Francisco has long been a hot spot for members of the military to visit while on leave here. One such military member was this Navy sailor, a handsome, young chap, back in the pre-World War II era. We begin our journey with him at a coffee shop at Judah and La Playa, the future site of today’s Java Beach. He is looking north toward Golden Gate Park and appears to be contemplating how he will be spending his day off. 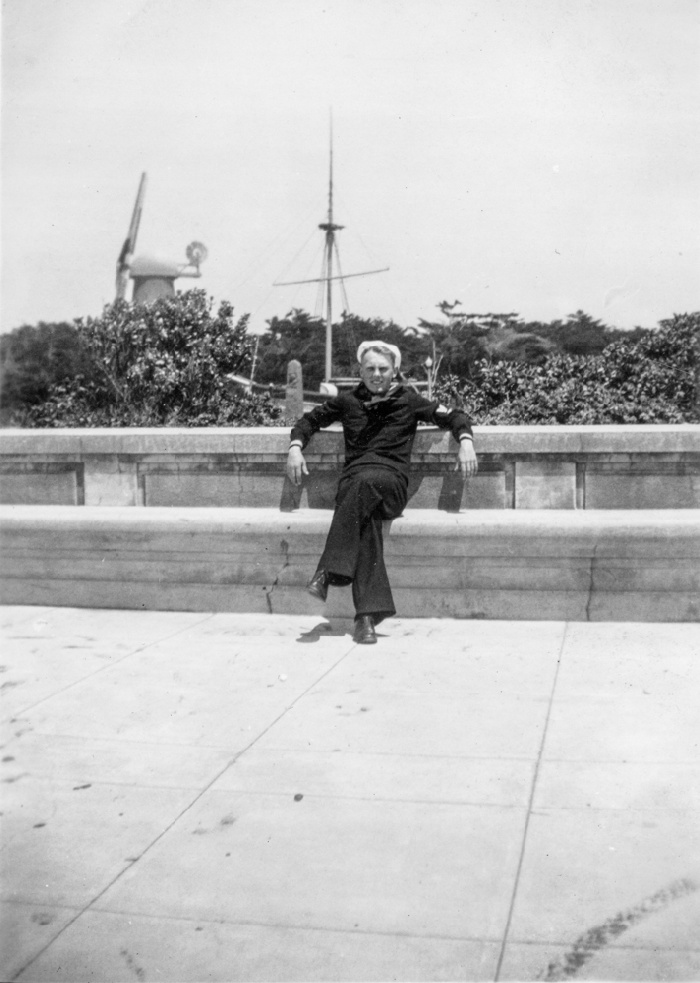 Sailor sitting on bench on Great Highway Esplanade across from Gjoa and Dutch Windmill, circa 1937. (wnp27.0198; Courtesy of a Private Collector)

Leaving the coffee shop, our sailor takes a stroll up the Great Highway Esplanade. Across from the northwest corner of Golden Gate Park, he sees Roald Amundsen’s Gjoa displayed near the Beach Chalet. As a sailor himself, he appreciates the courage and skill it took for Amundsen and his crew to sail the Northwest Passage. To remember the moment, he poses for a picture with the Gjoa and the Dutch Windmill behind him. 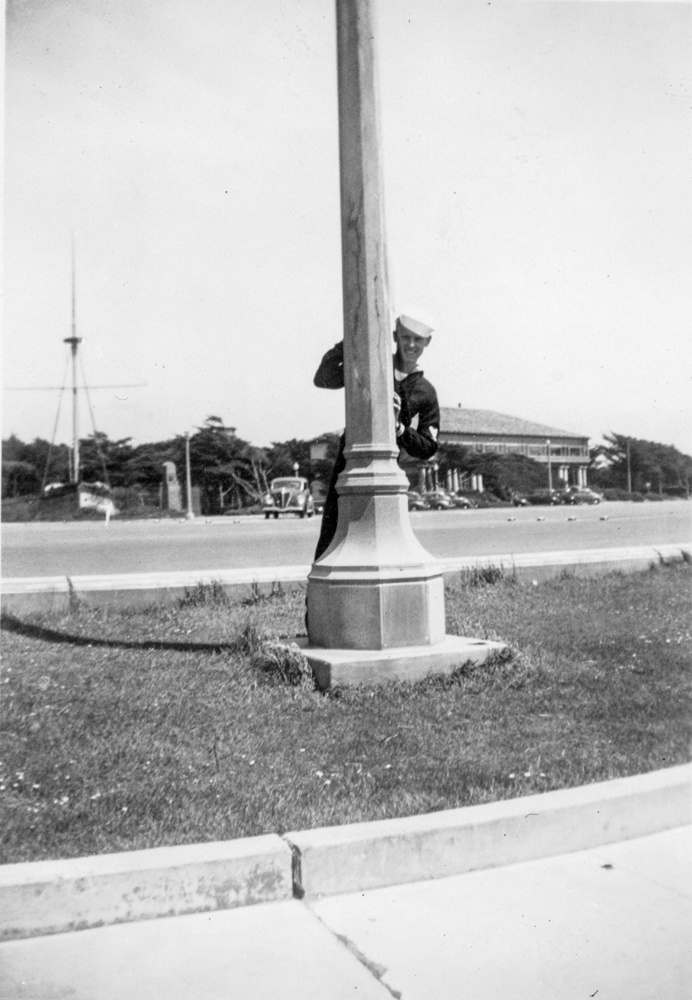 Sailor posing behind light pole on Great Highway Esplanade across from Gjoa and Beach Chalet, circa 1937. (wnp27.0203; Courtesy of a Private Collector)

Feeling that his first picture with the Gjoa was too mundane, our sailor poses for a second shot. This one is a cheeky, fun picture of him behind a light pole with the Gjoa and Beach Chalet seen across the Great Highway in the background. There’s a big smile on his face. He’s having a good day at Ocean Beach so far and the fun is only beginning. 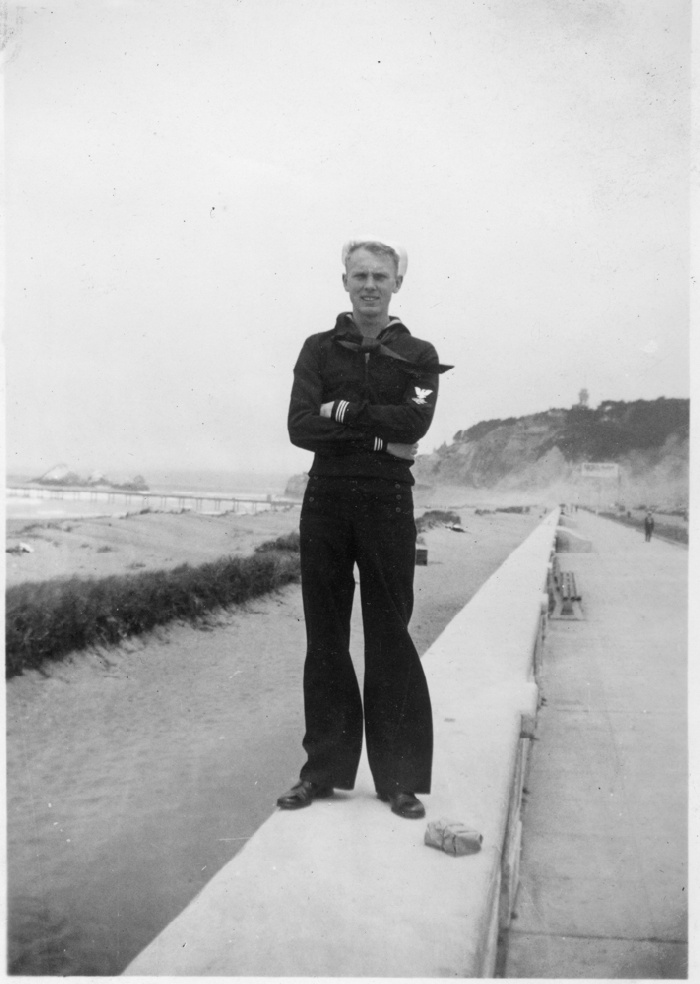 Sailor standing on Great Highway Esplanada seawall with Lurline Pier, Seal Rocks, and Cliff House behind him, circa 1937. (wnp27.0201; Courtesy of a Private Collector)

A little further to the north, our sailor takes in the sights at Lands End. He hops up on the seawall to enjoy the view. From there, he enjoys this perspective of the Cliff House, Seal Rocks, the Lurline Pier, and Adolph Sutro’s grand estate atop Sutro Heights. Like so many others who have visited the Outside Lands, our sailor appears to have realized that perhaps he should have brought a coat. 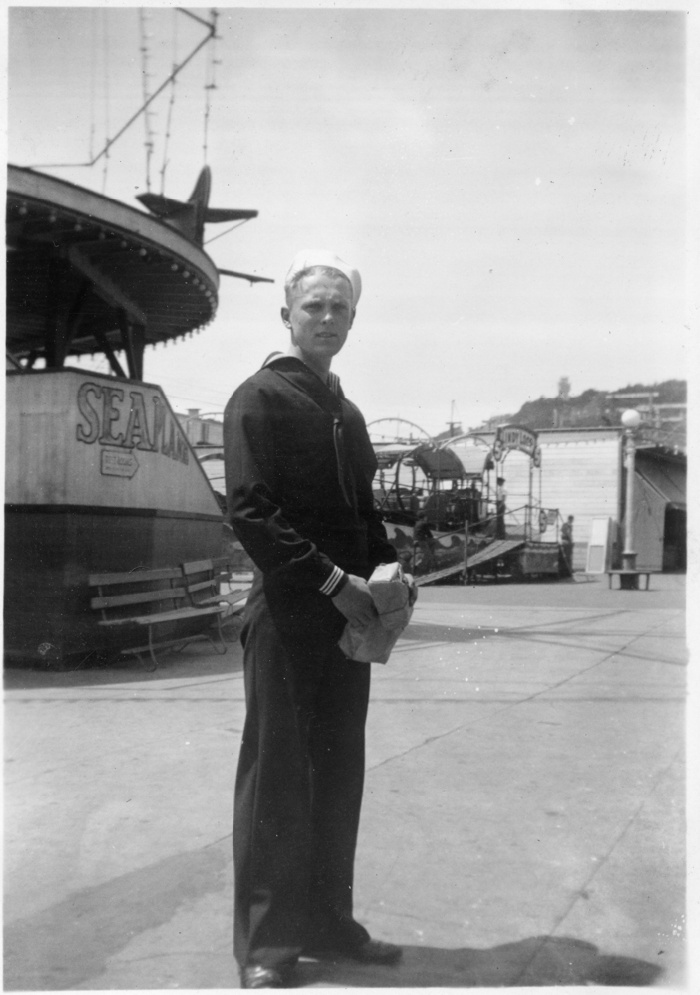 Now at the north end of Ocean Beach, our sailor spots Playland at the Beach across the street. Perhaps this was his destination all along. What young man wouldn’t want to spend some time at the amusement park by the ocean? We see him by the Seaplane ride at Playland. Did he just disembark from a flight? Does he serve aboard a Naval aircraft carrier and feel an affinity for planes at sea? 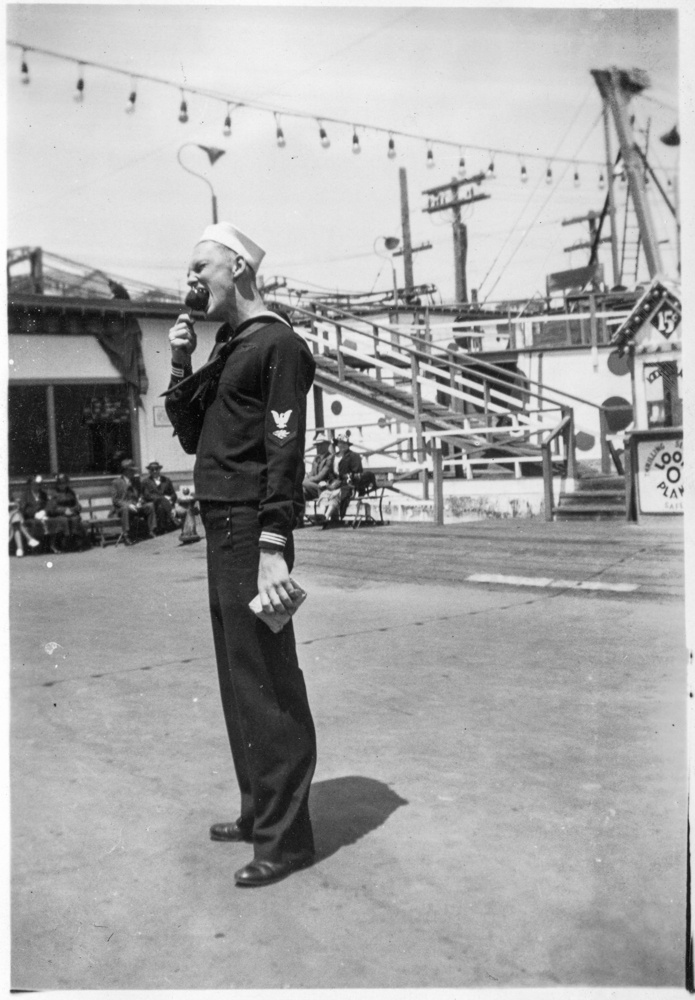 Sailor eating a candy apple on Midway at Playland, circa 1937. (wnp27.0200; Courtesy of a Private Collector)

After the walk up the Ocean Beach Esplanade to Playland, our soldier needs a snack. Playland offers so many choices. Perhaps some Mexican food at the Hot House. Or an It’s It ice cream. Maybe some chicken from Topsy’s Roost in the former Ocean Beach Pavilion. Our sailor opts for a candy apple. He bites in as he contemplates what to do next. 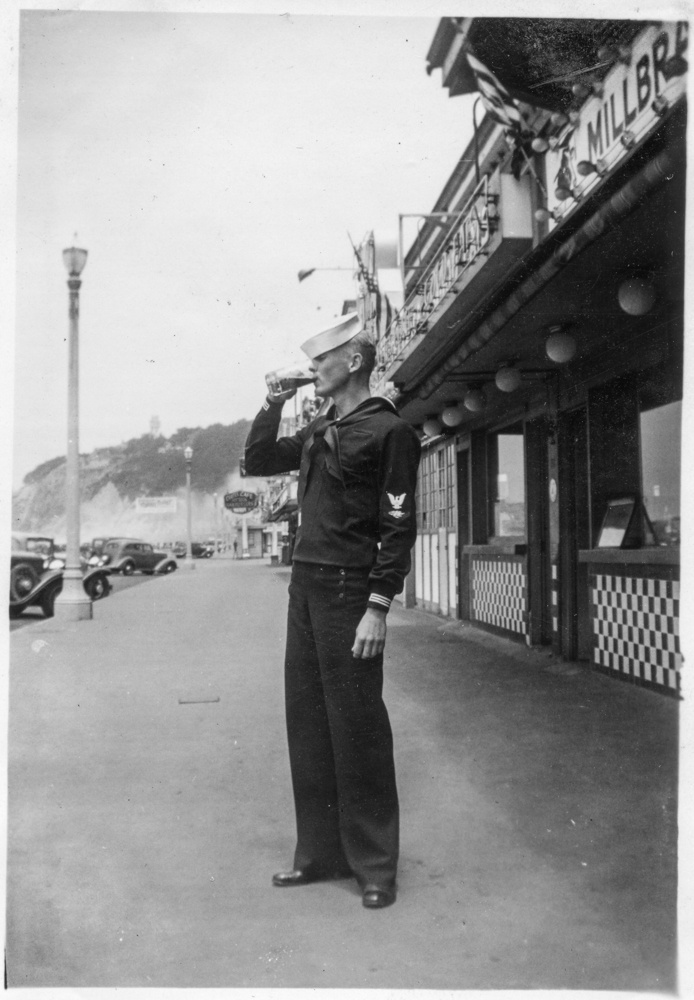 After finishing the candy apple, our sailor needs to wash it down with something. He polishes off what looks to be a mug of beer, but perhaps it is a soda or cider, as he peers out toward the Pacific Ocean. What a grand day he has had. But who has he spent it with? Someone has been on the other side of that camera. Is it a girlfriend? Parents? Navy buddies? We may never know, but we’re glad that our sailor has had good company for his day by the beach. Our sailor is not done, however. There is one more stop he wants to make. 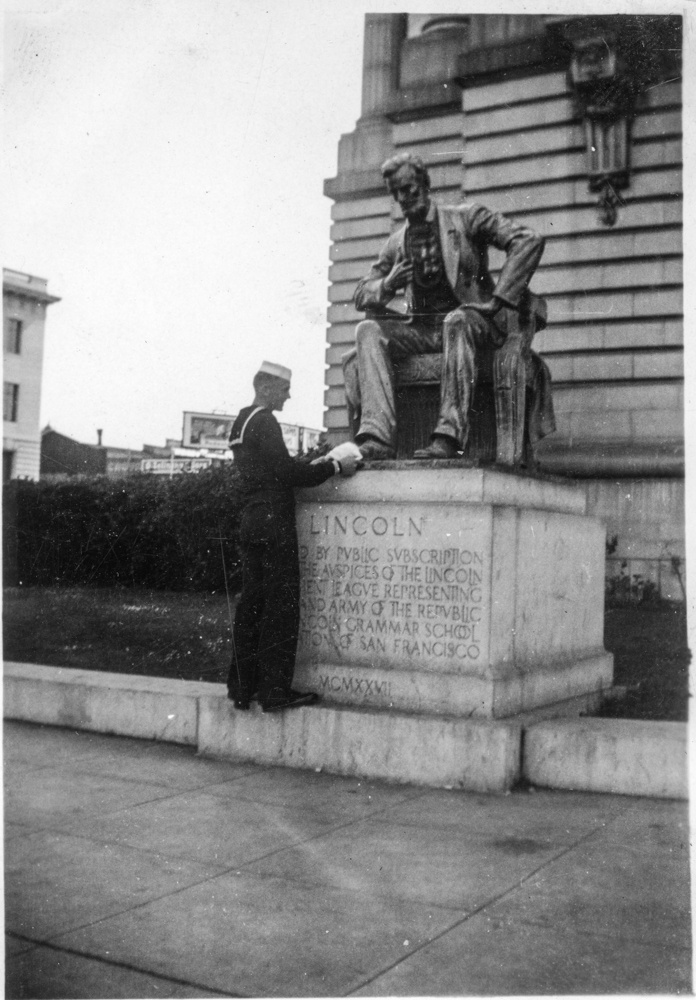 Finally, our sailor heads to City Hall to finish off his day by paying respect to the Great Emancipator, Abraham Lincoln. He looks to have a book with him. Is he reading the great words of Lincoln? Why did he think it was important to come to this spot? We do not know the name or anything about our young sailor. Do you recognize him? If so, please contact us and let us know the real story behind these photos. Nevertheless, we are delighted to have been able to follow a day in the life of this young sailor.