If you were building a new residential subdivision in the fog-swept sand dunes of the Sunset District in the early 20th Century, what might you add to the development to make it an attraction to potential buyers? If you were Joseph Leonard, whose Urban Realty Development Company was building on the site of a former racetrack, you peered through the fog and naturally thought that a sundial would be perfect. 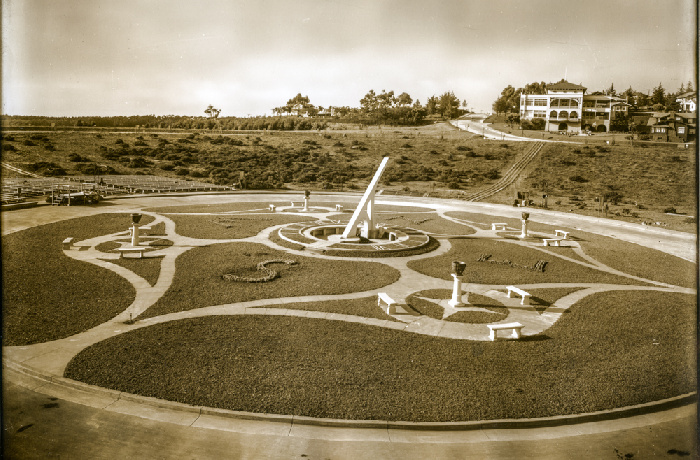 The Ingleside Racetrack was located just south of the Ocean Road (today’s Ocean Avenue) and just east of Junipero Serra Boulevard. It opened on Thanksgiving Day 1895, but competition from other tracks, anti-gambling ordinances, declining attendance, and, of course, a certain earthquake, closed the track for good. The Urban Realty Improvement Company purchased the property in March 1910 for $400,000.1 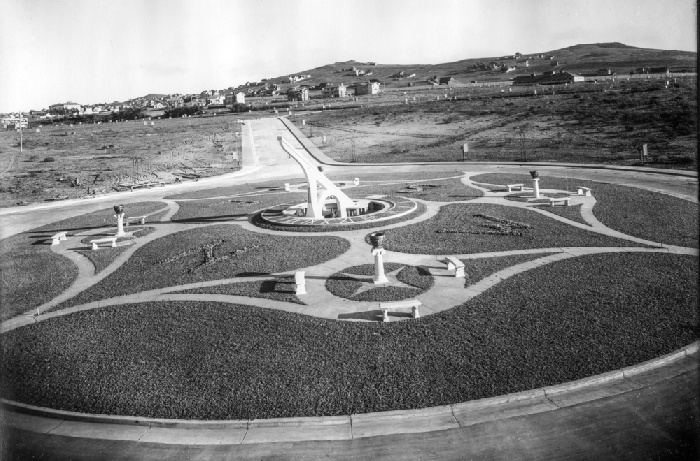 View southeast across Entrada Court toward Merced Heights, circa 1913. (wnp4.1730; Courtesy of a Private Collector)

The man behind the Urban Realty Improvement Company was architect, builder, and planner Joseph A. Leonard. Previously, with partners in the San Francisco and Suburban Home Building Company, Leonard had built earthquake shacks after the 1906 earthquake and the Jordan Park neighborhood, before starting his own company to build the Richmond Heights subdivision. These prior new developments were built within the City’s street grid. With the Ingleside Racetrack site, Leonard saw the chance to build a neighborhood from scratch with a different look. 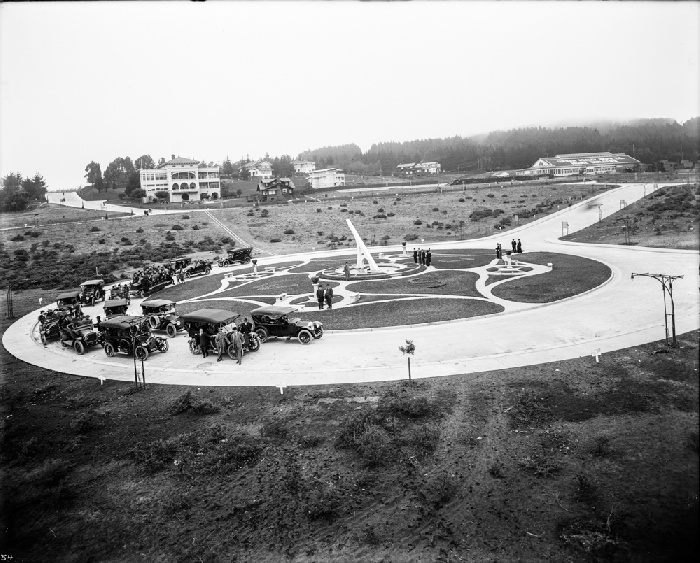 People and vehicles on Entrada Court around Sundial, circa 1913. (wnp15.645; Willard E. Worden – photographer / Courtesy of a Private Collector)

The focal point of what was to become the Ingleside Terraces neighborhood was Urbano Drive–named after Leonard’s company–a mile-long, oval street that followed the track of the old race course. With plans to build around and inside the oval, Leonard intended to keep the subdivision off the beaten path for a more tranquil neighborhood. Leonard promised to sell houses on easy terms. Leonard and other builders on the West Side were counting on the building of a streetcar tunnel under Twin Peaks to bring potential home buyers to the Outside Lands. 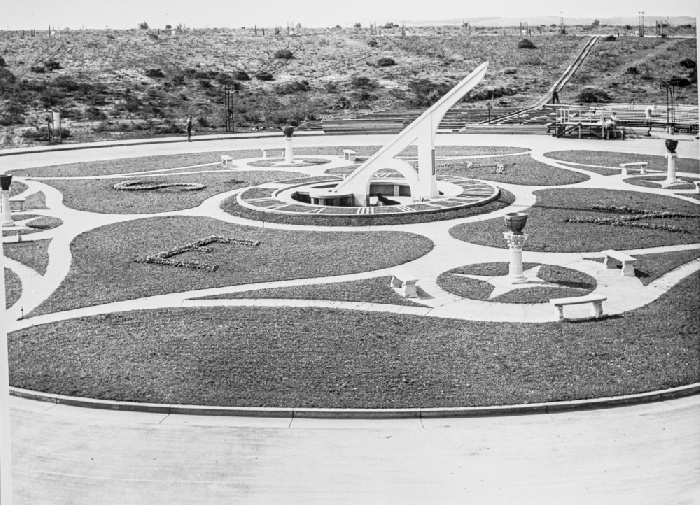 Infrastructure construction at Ingleside Terraces began in February 1911.2 The first house was completed in June 1912. Leonard wanted something unique that would attract homebuyers and hit upon the idea of building a sundial to be the signature centerpiece of the neighborhood. We’re not sure why he thought a sundial in a traditionally foggy area was a good idea–perhaps a subtle implication that it wasn’t so foggy there–but Leonard did not let the weather stop him. 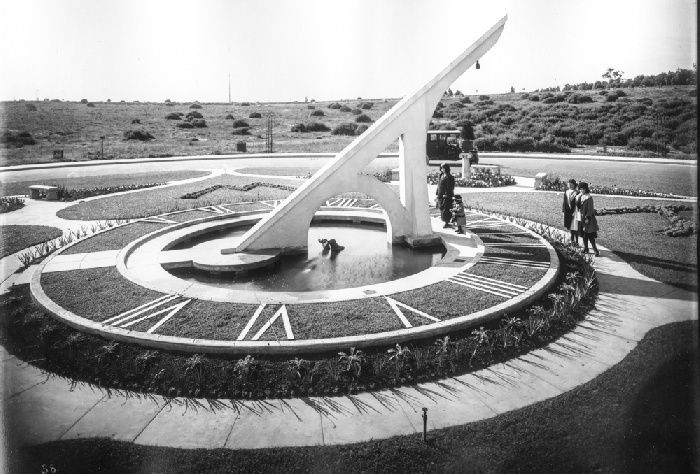 On October 10, 1913, the Sundial and surrounding park inside Entrada Court was dedicated. This was the same day that the waters of the Atlantic and Pacific Oceans were joined together in the Panama Canal. The Sundial’s marble and concrete gnomon–the projecting part that shows the time by the position of its shadow–was 28 feet long and it was billed as the biggest sundial in the world. The circle around the Sundial with Roman numerals measured 34 feet in diameter. Underneath the Sundial was a small reflecting pool with two brass sea lions. 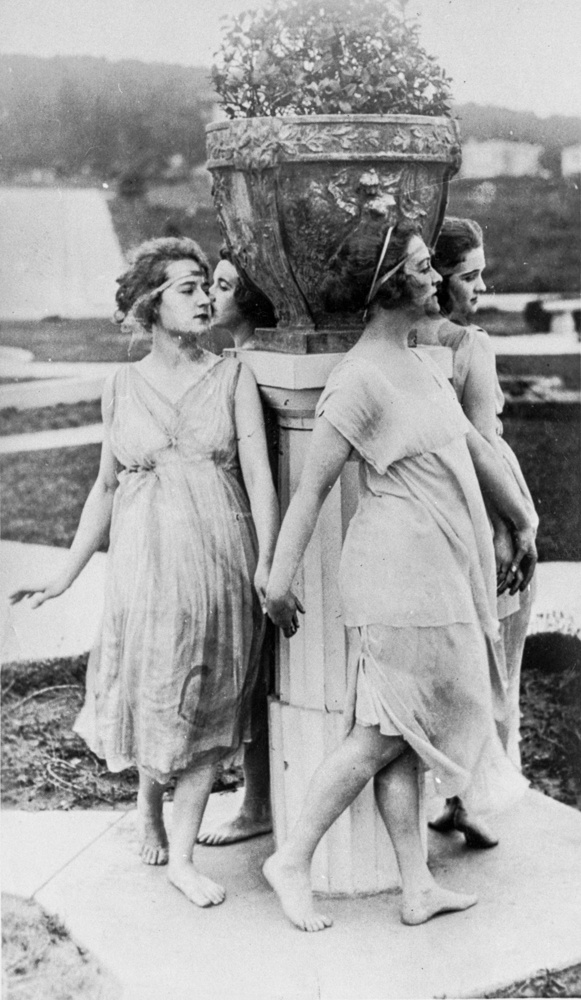 The Sundial park featured four pathways to the Sundial and four circles between those pathways. Each circle featured a pillar with a decorative urns featuring flowers and figures. Having four of everything was supposed to represent the “four ages of man and nature’s four seasons.” As this was a northern hemisphere sundial, the gnomon pointed to Polaris, the north star, and the angle of the gnomon was 37.7 degrees, equal to the latitude of Ingleside Terraces. On sunny days, the shadow of the gnomon falls on the Roman numerals to show the time. 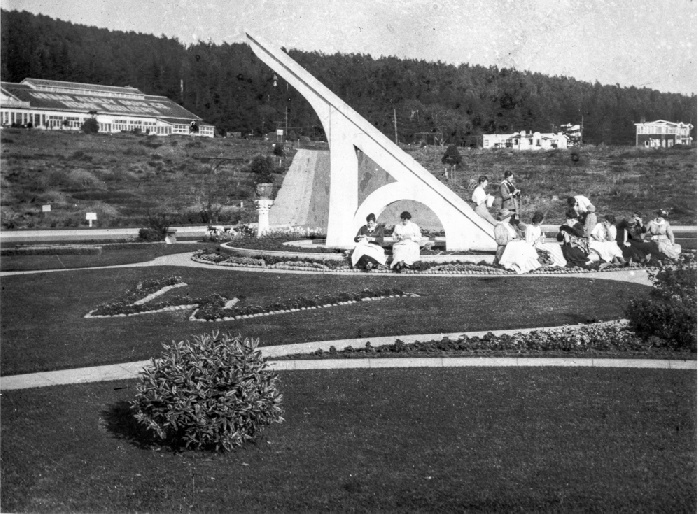 The dedication ceremony was naturally held…at night. A “fairy land of lights” were strung up around the Sundial for the ceremony.3 Leonard presided over the festivities, which was attended by City Engineer Michael O’Shaughnessy and supervisor Charles Murdock, among others. The Coast Artillery Marching Band provided music. A child emerged from the fountain personifying the release of the water’s spirit. 40 adults and 20 children participated in an allegorical pageant.4 Following the children’s entertainment, 50 couples danced around the Sundial. 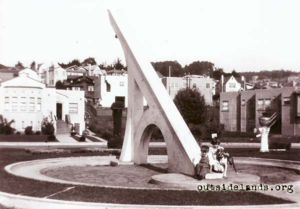 Sometime after the dedication ceremony, the Urban Realty Improvement company produced a 32-page brochure about their new residential subdivision. The brochure was likely passed out at the 1915 Panama-Pacific International Exposition. Early development was slow, but picked up after the Twin Peaks Tunnel was finally completed in February 1918. The reflecting pool and bronze seals were gone by then, but other than some additional plants, Sundial Park looks much the same today. Even if you cannot tell the time when the fog blocks out the sun, the Sundial remains one of San Francisco’s best attractions.