We have a LOT of images of the 1906 earthquake and fire and aftermath in our OpenSFHistory collection. The events of April 18, 1906 primarily affected the downtown and surrounding areas of San Francisco with the fires causing much of the damage. Like drivers passing an accident today, people from around the areas that suffered the worst took to the streets and parks to watch. Some of them took pictures. Let’s take a walk around the perimeter of the devastation zone and see what the people in 1906 saw. Here are ten views of the destruction. 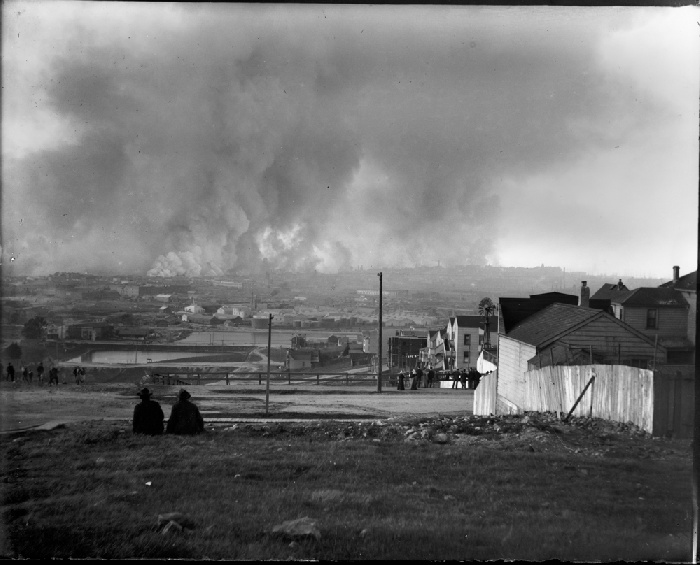 We start south of the fires in the Potrero Hill area. We see two people in the foreground sitting in an empty lot looking north toward the downtown area. A little way down the hill, there are a dozen or so others standing and staring at the smoke and flames. Potrero Hill suffered damage from the earthquake itself, but the fires would not reach that far south. 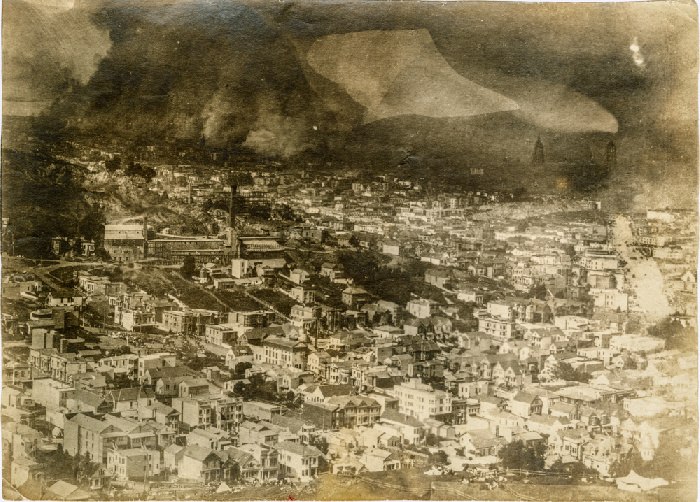 Moving west from Potrero Hill, we go to Twin Peaks. We see Market Street and the dome of the old City Hall on the right. It appears the worst of the fires is happening to the north of City Hall. However, there is significant smoke to the east of City Hall as well. City Hall would suffer significant damage from the quake and fires resulting in a new City Hall being built in its present location. 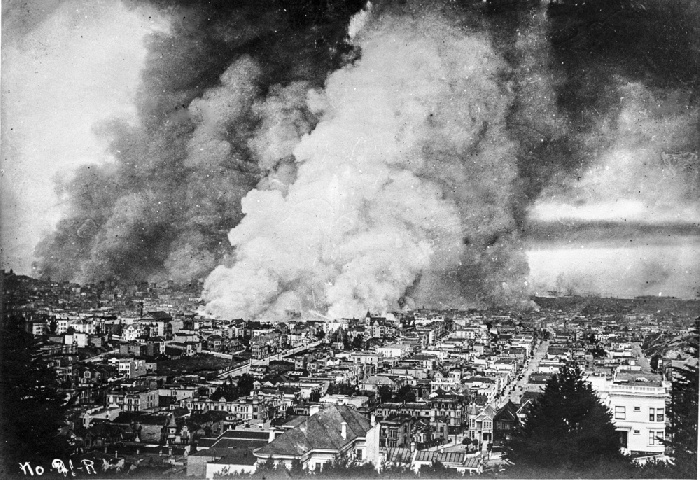 To the north of Twin Peaks, we get to Buena Vista Park. Looking east from there, it appears that most of the downtown area is in flames. The fires would mostly be stopped from getting further west at Van Ness Street, but in a few areas, it did get across Van Ness, such as in Hayes Valley. 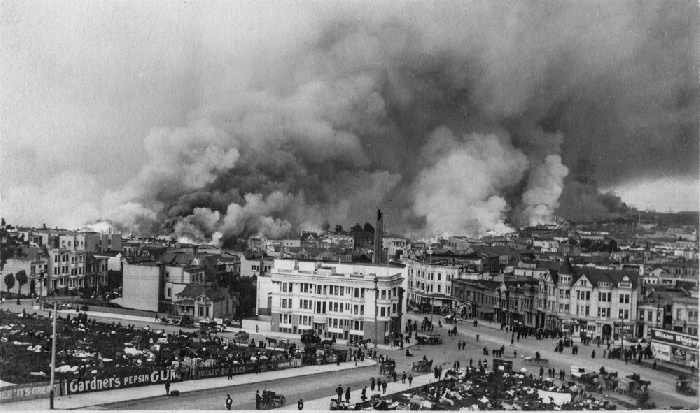 To the east of Buena Vista Park is Mint Hill, so named because of the large U.S. Mint building located there now. The Mint was not yet there in 1906, so the hill was one of many elevated views of the raging fires. Market Street can be stretching northeast from the bottom right of the image, so the smoke and fires seen in this image are mostly from the south of Market areas that suffered a heavy toll. 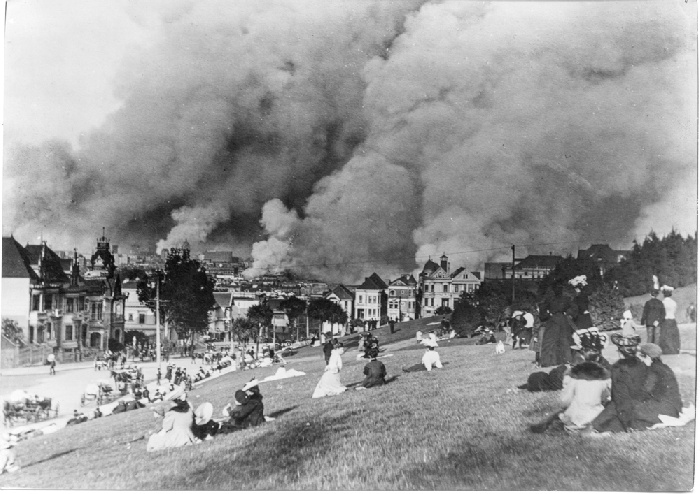 Just to the northwest of Mint Hill is Alamo Square. Here you see lots of people, mostly women it appears, watching the conflagration. While the crowd looks to be calm, they were surely worried about family and friends and wondering if they were safe there (they were). 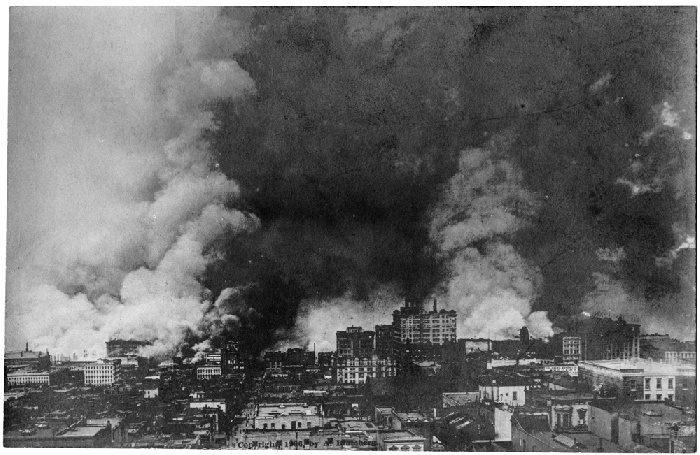 We head northeast from Alamo Square to Nob Hill. We believe this image was taken from the Fairmont Hotel, then nearing completion of its construction. From there, you can see the incredible devastation taking place in the Financial District. The Fairmont was not a safe location as it turned out. The fires would spread over Nob Hill as the flames headed west. The Fairmont would suffer heavy interior damage which would delay its opening to 1907. 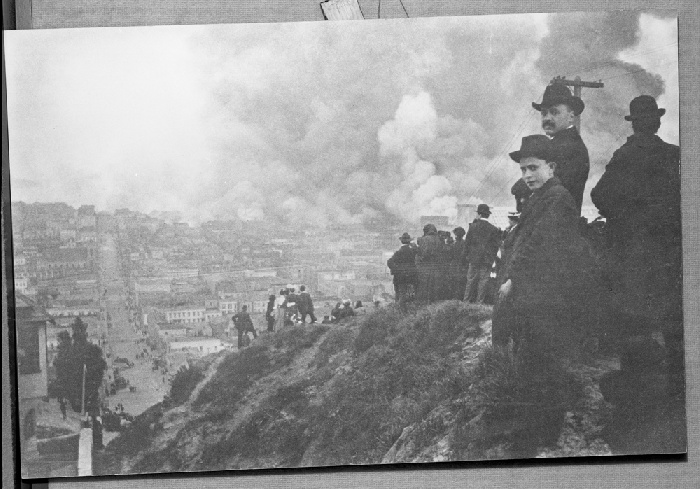 To the north of Nob Hill, Russian Hill was another popular gathering spot for on-lookers. You can also spot numerous people on Vallejo Street extending east from the bottom of the hill. This area would also be overrun by the advancing fires, likely making refugees of most of these people. 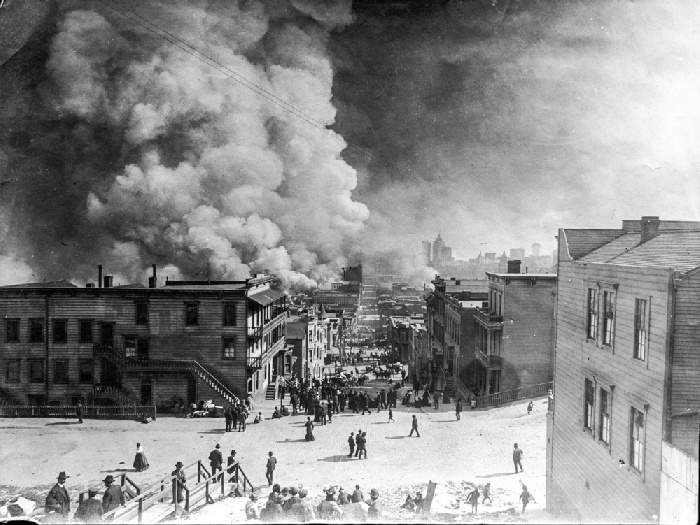 To the east of Russian Hill is Telegraph Hill near the waterfront. In this view from the lower part of Telegraph Hill looking down Montgomery Street from Green Street, we again see a lot of “looky-loos” crowding the street. These people would eventually have to evacuate. However, while the fire would reach the spot where this image was taken, much of the area behind the photographer would be saved by the actions of a Navy tugboat, the Leslie, one of three Navy tugboats that fought the fires. 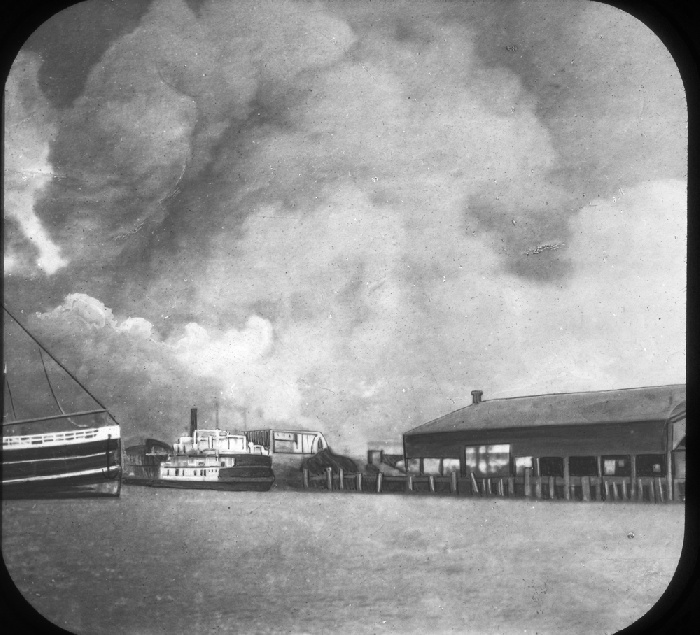 We head southeast from Telegraph Hill to the Jackson Street pier. Here we find ourselves almost in the midst of the great fires destroying the City. While the pier and the boats there are not on fire yet, it appears that it won’t be long until they are. Fortunately, the piers would be saved, largely because of water being pumped from the Bay through tugboats. In addition to the Navy tugboats, two state-owned fireboats, the Governor Irwin and the Governor Markham participated in fighting the fires from the Bay. 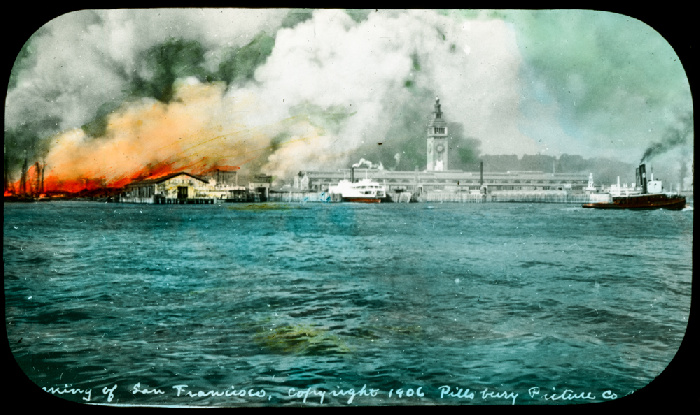 We end by heading out into the Bay from the Jackson Street pier. This is a colorized view and the Ferry Building looks like it is in serious danger. It would survive with little damage though, like the other piers.

As mentioned, we have a lot of images from the 1906 earthquake and fire. Many of them are collected in this Gallery of 1906 Earthquake and Fire images. You can also find many more by doing a search for images using search terms related to that event. It is hard to imagine today what people in 1906 went through seeing this large-scale devastation happening to their homes. Hopefully, we will never have to know.