This week, Lincoln High School celebrates its 80th anniversary. The first and only public high school built in the Sunset District, Lincoln was constructed after more than a decade of campaigning. To honor this anniversary, we are taking a look at five of our favorite images from the early years of Lincoln High School. 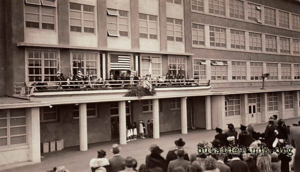 Our first image goes back to the beginning, the dedication ceremony on Sunday, September 22, 1940. As seen here, a number of speeches were given, but there was also a parade and marching bands.1 Sunset District residents began seeking a local high school back in 1927 as their children often had to take several buses just to get to their high school. Finally, in 1938 a bond measure to build a school was placed on the ballot and passed with a great deal of lobbying by the Parkside District Improvement Club. Classes would begin on the day after the dedication. 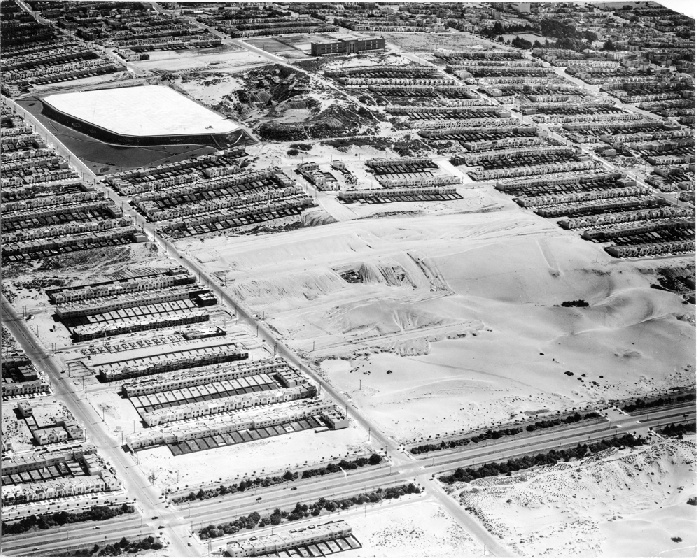 When Lincoln High was built, it was located on one of the then still existing sand dunes in the Sunset District. In the image above, it stands tall by itself just to the southeast of the Sunset Reservoir. Another large sand dune fills the area west of the reservoir from about 31st Avenue out to Sunset Boulevard. Despite the size of the Lincoln High building, it was not big enough to contain all the students from the area, so a number of bungalows would be built around the exterior. These bungalows would end up serving as classrooms for over 50 years. 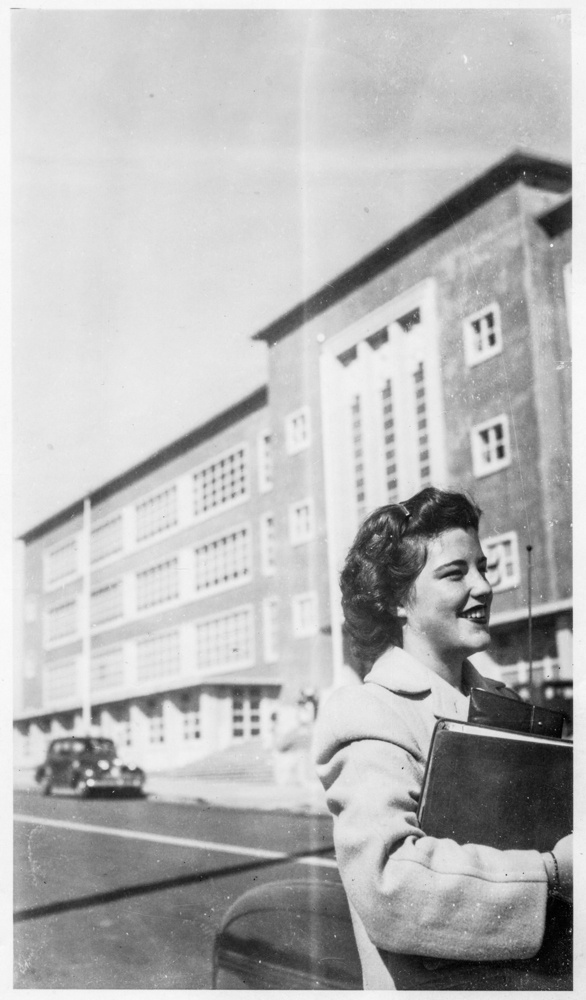 Female student with binder on 24th Avenue in front of Lincoln High School, 1943. (wnp27.1106; Courtesy of a Private Collector.)

While this image is focused on the student, it gives us a good look at what the 24th Avenue side of Lincoln High looked like at the beginning. The four-story building was designed by Fred H. Meyer, Martin Rist, and Timothy Pfleuger. The school featured 100 classrooms, workshops, and a library, but did not have a gymnasium or auditorium when it opened. Separate girls and boys gymnasiums–North and South Gymnasiums, respectively–and the auditorium would be built later. A stadium would eventually be erected in what were sand dunes to the south of the main building and to the north of McCoppin Square. 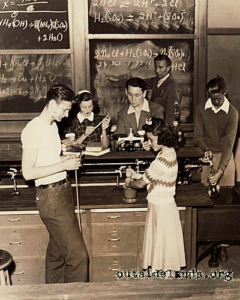 As a new high school, Lincoln featured then modern science labs, such as this chemistry classroom where the students in this image are being taught by John Nill. A number of notable people matriculated through these classrooms, including former California Representative and State Senator John Burton, actress Barbara Eden, golfer Johnny Miller, football coach Mike Holmgren, Constitutional law professor Laurence Tribe, and Sunset District historian and author Lorri Ungaretti. 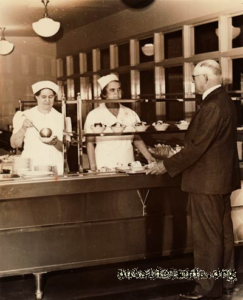 We always like it when we find images of the people who are typically overlooked and underappreciated. Perhaps the most overlooked and underappreciated people at a high school are the “lunch ladies.” When Lincoln High School opened, it had a modern cafeteria that was run by Eunice Carl and June Pease, seen here with Principal C.W. White. The cafeteria served meals to several thousand students each school day. These days, Lincoln is considered one of the top high schools in the state. A new wing was finished in 2009 which finally allowed the school to remove the bungalows. We look forward to the next 80 years of Lincoln High School.

California became a state on September 9, 1850. Thereafter, September 9th was celebrated as Admission Day. In 1925, California was commemorating the 75th anniversary of it joining the union. San Francisco was not about to let a diamond jubilee go by without a party. So party the City did. 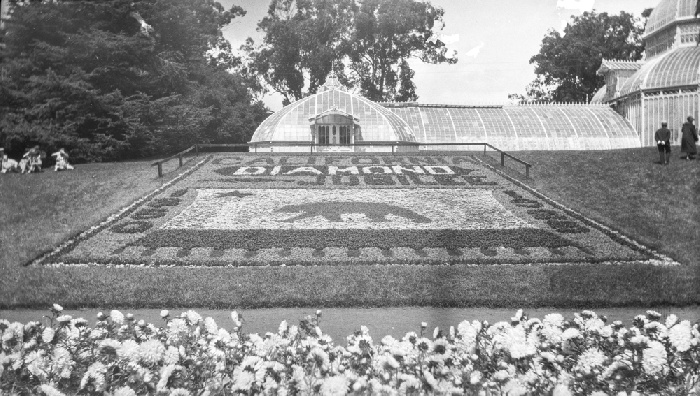 San Francisco’s Diamond Jubilee festivities began on Saturday, September 5, 1925, with an automobile parade on Market Street that included famous race car drivers such as Barney Oldfield. That afternoon, an area on the Embarcardero was dedicated as the “Joy Zone,” which featured games, circus-style acts, bands, bathing beauty revues, and water exhibitions of speed boats, fire boats, seaplanes, and fishing boats.1 A grand ball was held at the Civic Auditorium that evening where Agnes Pottage was crowned as “Queen California.” 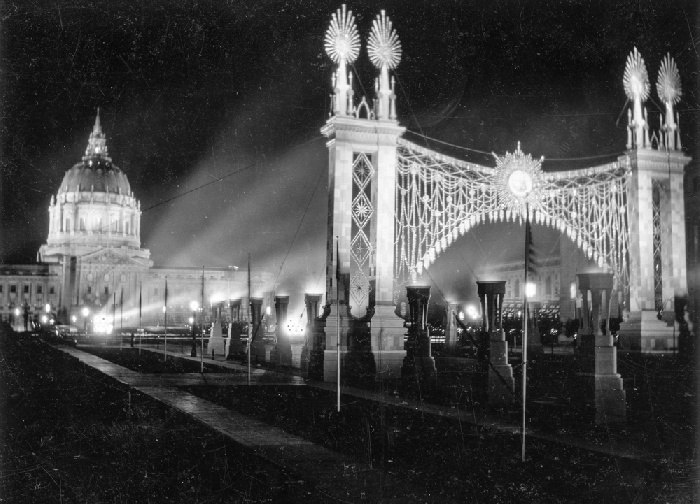 The decorative centerpiece for the Diamond Jubilee was a great, “jewel”-encrusted archway in Civic Center Plaza that was illuminated at night. Dubbed the “Arco de Brilliantes,” it dazzled spectators as rainbows of color reflected off of its “diamonds” when the spotlights were turned on it. 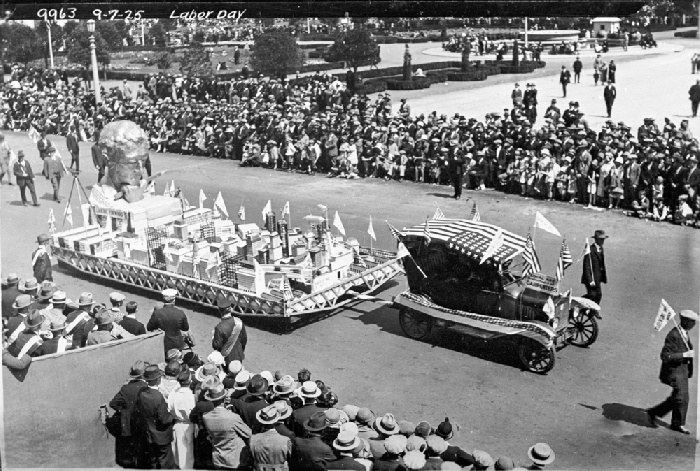 Auto racing fans headed to the Tanforan Racetrack on Sunday, September 6, 1925, for a series of races and events. Frank Lockhart set a new track record by completing a mile in 47.6 seconds, breaking the old record by two seconds.2 That evening a fashion show was held at the Civic Auditorium. The following day, the grand 1925 Labor Day Parade and celebration that we took a closer look at last week was held. 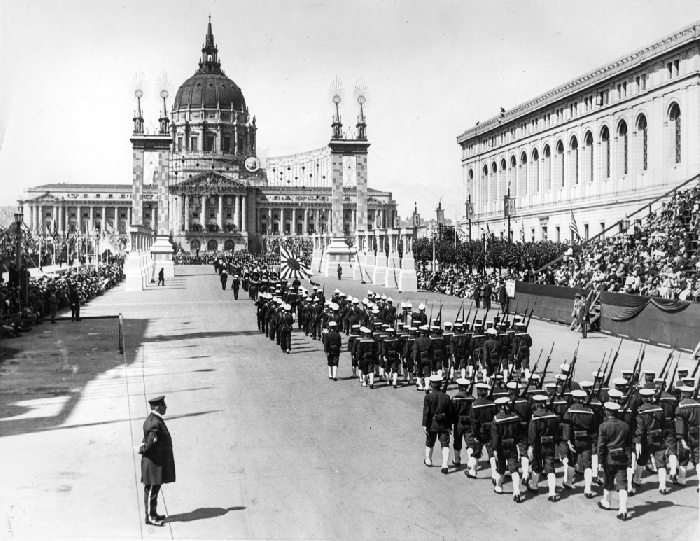 The military joined the proceedings with a parade on Tuesday, September 8, 1925 for Army and Navy Day. Chief Dan O’Brien led a mounted squad of police as escorts at the head of the military parade.3 Next were Mayor James Rolph and Grand Marshal Brigadier-General Thornwell C. Mullaly in a squadron of cars that included visiting British and Japanese Naval officers and Army, Navy and Marine Corps chiefs. Finally, the troops came marching. First, British sailors and marines, then Japanese sailors and their band, and followed by “San Francisco’s Own” 30th Army Regiment and other military regiments. At the end of the parade was a Red Cross float and a busload of Civil War veterans, who drew the biggest applause. 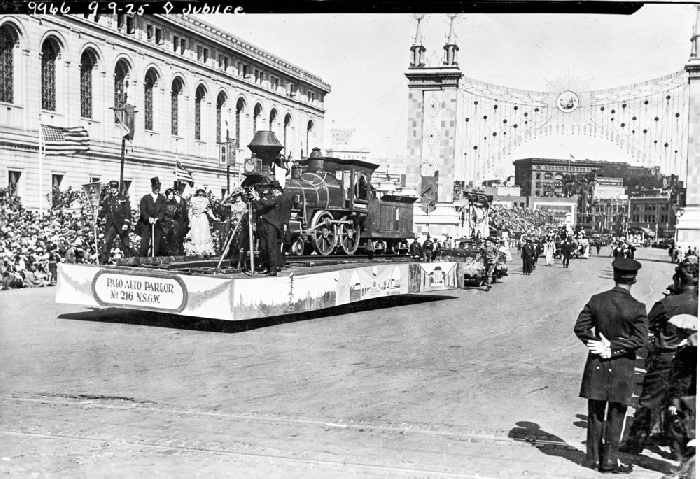 Admission Day was greeted with the arrival of some dignitaries, notably Vice President Charles G. Dawes. Dawes led the Admission Day parade–once again down Market Street to the Civic Center–and was universally greeted with thunderous applause and shouts.4 The Vice President was humbled by the greeting, stating that he had never seen such a crowd in his life. 650,000 people lined the parade route to see floats and marchers representing the different eras of California history.5 Cities, counties, and industries from around the state contributed floats, spear-headed by various local chapters of the Native Sons of the Golden West. A few original “forty-niners” in automobiles were showered with cheers. 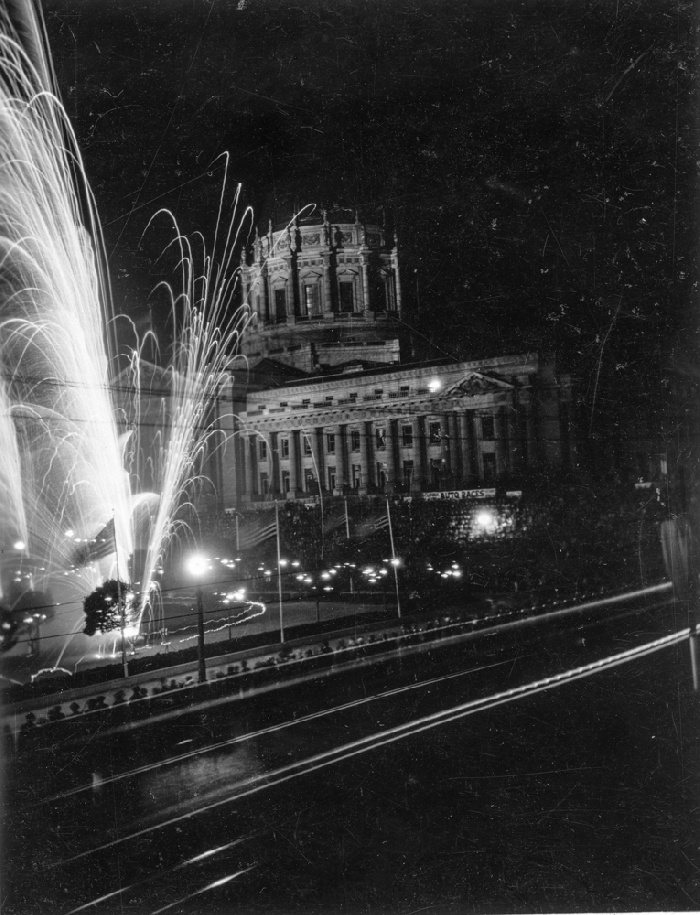 After the parade, celebrants could attend any of a number of concerts being held in Golden Gate Park, the Civic Auditorium, and Union Square. A banquet to honor Vice President Dawes was held at the Fairmont Hotel that evening. A big fireworks program in the Civic Center was held at 8:00 p.m. and a ball closed out the night at the Civic Auditorium, during which prizes were announced for the best floats in the parade. 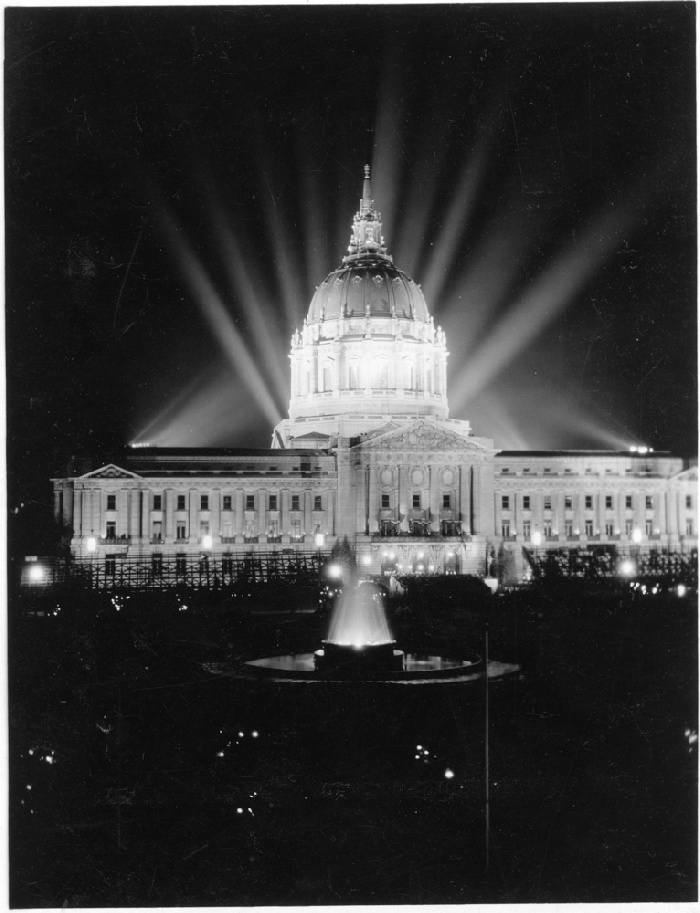 City Hall and fountain lit up at night for Diamond Jubilee, September 1925. (wnp27.4238; Courtesy of a Private Collector)

Although the Admission Day festivities were the highlight of the week, the celebrations were not done. On Thursday, September 10, 1925, there was a girls swimming competition at Fleishhacker Pool, another concert in Union Square, and more fireworks. Friday, September 11, 1925, saw golf and senior swimming competitions, an auto parade on Market Street, yet another Union Square concert, and a performance Haydn’s “Creation” by the San Francisco Municipal Chorus at the Civic Auditorium in the evening. 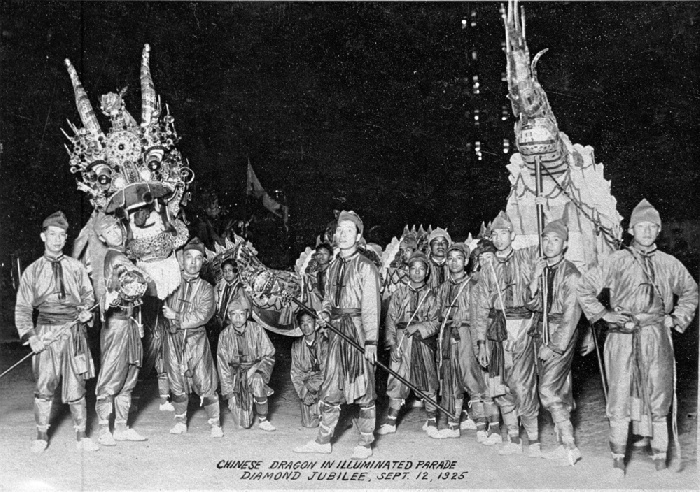 More auto races, swimming championships, and band concerts were held on the final day of the Diamond Jubilee commemoration, Saturday, September 12, 1925. The highlight of the day though was a stunning, night-time electrical parade on Market Street. Fraternal and other organizations from around California constructed more than 50 elaborate floats for the light spectacle deemed the “crowning achievement” of the Diamond Jubilee.6 In the end, the Diamond Jubilee was a spectacular celebration.

Another Labor Day is upon us. Labor Day celebrates the contributions of American workers to our country’s development. President Grover Cleveland signed legislation making Labor Day a federal holiday in 1894. In California, Governor Henry Markham declared that the first Monday in September would be the Labor Day legal holiday in 1892. Even before that, various labor organizations had been celebrating Labor Day with parties and parades in San Francisco. 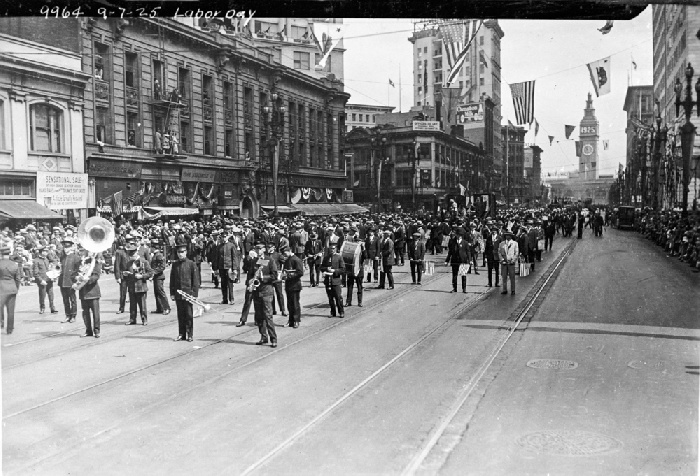 Big plans were made for Labor Day 1925, which fell on September 7th, just two days before Admission Day. 1925 was the 75th or Diamond anniversary of California’s admission to the Union. The Diamond Jubilee celebration began during the weekend before Labor Day. Out on the Bay, yachts, rowers, swimmers and divers gave exhibitions.1 At the Tanforan Racetrack, auto races were featured which included famed driver Barney Oldfield. There was even a fashion show and ballet at the Civic Auditorium. Several naval submarines were docked at Pier 30 and, for the first time ever, the public was allowed to board them during that week’s festivities.

At 10:00 a.m. on Labor Day, a parade started at the east end of Market Street and headed for the Civic Center. People worked for weeks on 42 floats that depicted various labor activities. As was typical of newspaper flowery prose at the time, the Chronicle stated that it was “expected that never before in the history of California will the dignity and achievement of labor have been pictured so elaborately as in this parade.2” Presiding over the parade as Grand Marshall was William P. Stanton, the president of the San Francisco Labor Council. 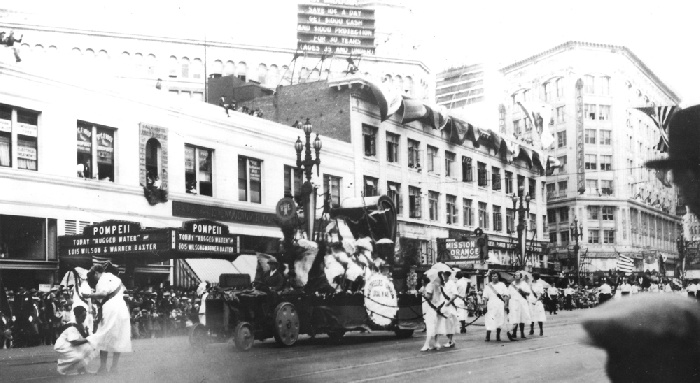 The parade had approximately 60,000 marchers and virtually every union and industry in the City was represented.3 Among them were waitresses, hotel employees, carpenters, engineers, iron workers, bridge builders, federal employees, garment workers, meat packers, milk drivers, printers, and teamsters. The pastry chefs’ float distributed cookies to some of the hundreds of thousands of spectators. 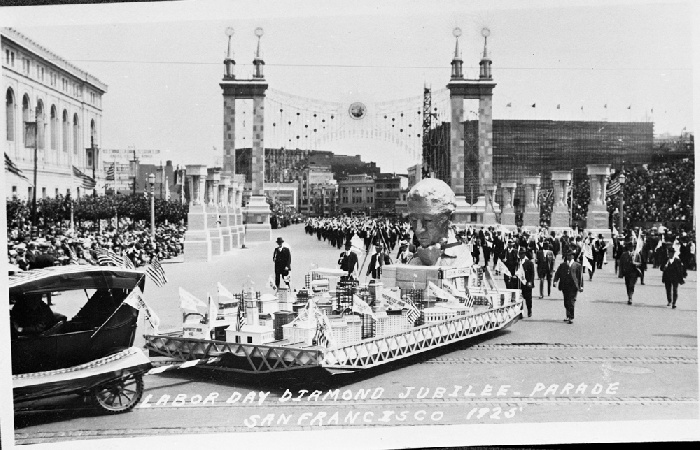 At the head of the march was a float showing various types of workers holding up a model of the world with a banner stating “Labor Creates and Sustains Civilization.” The painters’ float had a giant paint bucket at one end and children dressed in various colors representing the various colors of a palette. Steel workers drove real rivets into a large girder on their float. Spectators found the pipefitters’ float amusing as it depicted both an 1850 kitchen and a 1925 kitchen to demonstrate how far technology had advanced in 75 years. One of the most elaborate floats depicted Rodin’s “The Thinker” gazing at a model of the state of California. The float’s motto stated: “Think: The Wealth of California Was Created by Labor.” 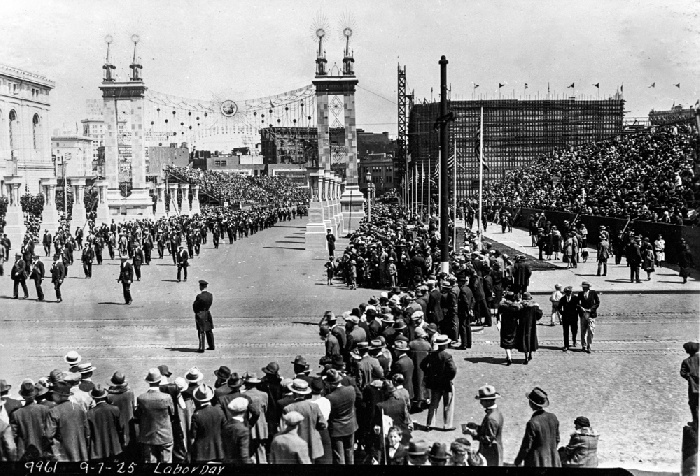 A crowd favorite was the ferry boatmen’s float from which a piano player and R.T. Hunter, known as the “Caruso of the ferries,” would stop along the parade route and belt out tunes for the crowd.4 When the marchers and floats reached the Civic Center, they paraded in front of reviewing stands on both sides of Polk Street in front of City Hall. 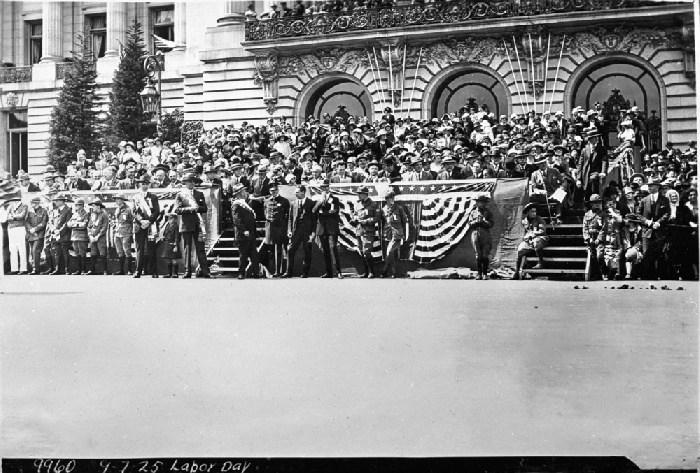 After the parade, the celebration continued at the Civic Auditorium that night. The festivities included music and dancing and the awarding of prizes for the parade floats. When it was over, San Francisco did not rest for long. Tuesday, September 8, 1925 featured a military parade, followed by the Admission Day Historical parade on Wednesday, September 9, 1925. It was three days of parades and festivities the likes of which had not been seen before in San Francisco.