On April 4, 1870, Governor Henry Huntly Haight signed the legislation that established Golden Gate Park. The legislation adopted the boundaries of the Park, established a Park Commission to oversee it, and authorized bonds to raise money for its construction. Since then, what started as a lot of sand and some plant life has been turned into a world-class public park. This landscape has changed significantly in the last 150 years.

To see this change, let’s take a look from the highest spot in the Park. Strawberry Hill stands nearly 430 feet high. Because of the excellent view from there, it was a natural spot for photographers over the years. 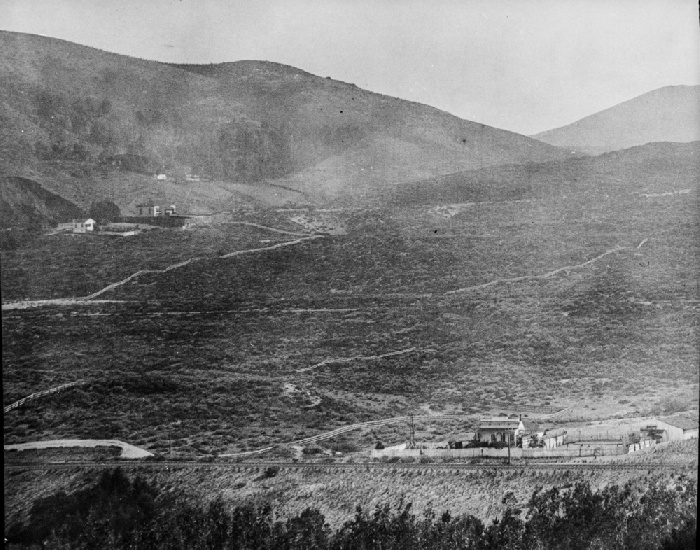 In this first view toward Mt. Sutro, circa 1886, there is little civilization to be seen from Strawberry Hill. Just some rolling hills and a few homes. The house in the foreground is the Reynolds House, located approximately where Lincoln Way and 14th Avenue are today. In front of the Reynolds House are trees planted by William Hammond Hall in Golden Gate Park. The Park was still in its infancy then, but Hall’s efforts to plant trees and grass in the sand had taken hold. Beyond the Reynolds home is a solitary home on the slope of Mt. Sutro. There are a few trees on those slopes, but not the forest that would later be there. There is little else there but sand and scrub brush. It is a peek into the past at how the Outside Lands once looked. 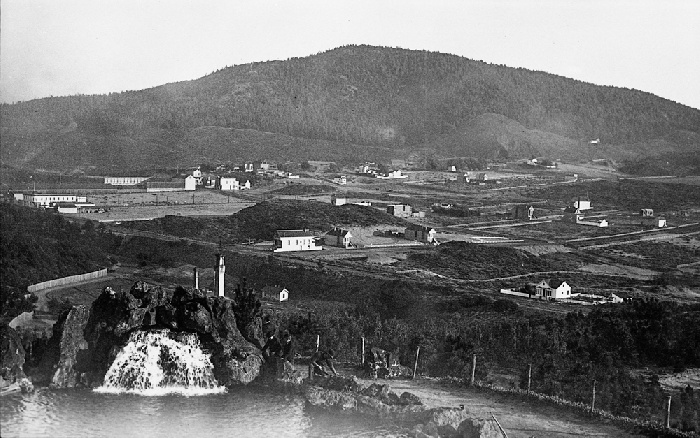 This circa 1895 image appears to have been taken from Sweeny Observatory which was built on Strawberry Hill in 1891. At this time, roughly 5-10 years after the first image, you can still see the Reynolds House and the house on Mt. Sutro’s slopes that were seen before. However, there are a number of other homes located in the area by this time. Mt. Sutro is now covered with trees planted by Adolph Sutro. You can also see the beginnings of the road grid in the Inner Sunset. The tower behind the waterfall on Strawberry Hill is the Golden Gate Park pump station and there is a small building within the Park boundaries. That building is in the area of today’s Botanical Gardens. What was once looked like a desolate area was now becoming a community. 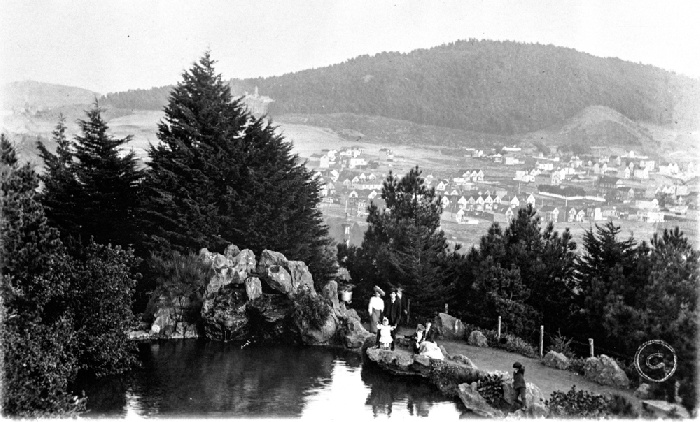 This image was taken from the same spot, likely Sweeny Observatory again, as the prior image. Since the 1906 earthquake destroyed Sweeny Observatory, the image predates that time. So again, we are looking at about 5-10 years from the prior image. In the background, the Inner Sunset has continued to fill out. The building for UCSF’s precursor, the Affiliated Colleges, can be seen behind the big tree in the center left of the image. Obviously the trees atop Strawberry Hill around this small lake have grown considerably since the prior image and they obscure the areas of the Park below the hill. The pump station can still be seen peeking through those trees, but it appears to still be taller than its immediate surroundings. It is clear that by the early 1900s, the Inner Sunset was growing fast. 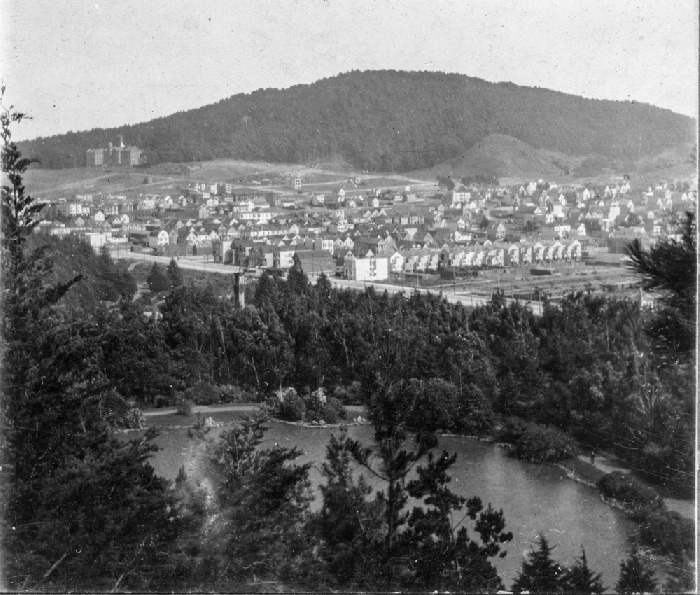 View southeast from Strawberry Hill toward Mt. Sutro, circa 1910. (wnp24.308a; Courtesy of a Private Collector)

With Sweeny Observatory destroyed, images from Strawberry Hill thereafter were not taken from such an elevated view anymore. This image appears to have been taken sometime around 1910. There is a clear view of Stow Lake and it shows the Inner Sunset filling in even more. There is an unobstructed view of the Affliated Colleges building on Mt. Sutro’s northern slope and it remains isolated, though the Inner Sunset was moving closer to it. The pump station is still seen, but the trees are rising up around it. In fact, all the trees in Golden Gate Park were getting pretty big by this time. 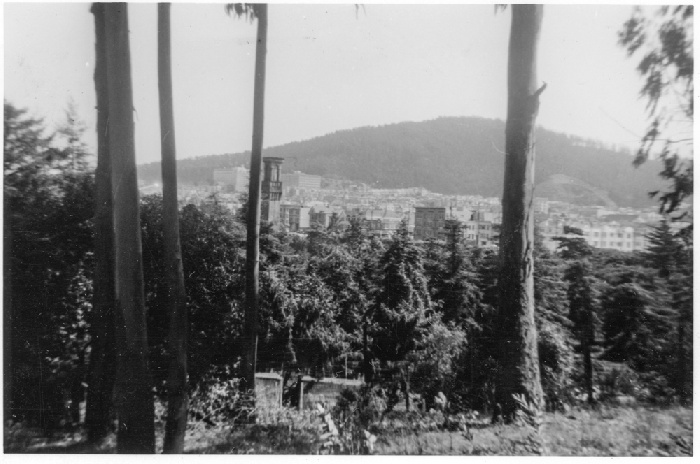 By 1939, the Inner Sunset had filled up all the available space between Golden Gate Park and Mt. Sutro. The Affiliated Colleges building can still be seen behind the pump station tower in this image and was, by then, surrounded by civilization. Mt. Sutro remained heavily forested and mostly untouched, a condition that would soon begin to change. While some of the buildings have since been replaced , it is a view that is not the far different from today nearly 80 years later. A few changes would come though. 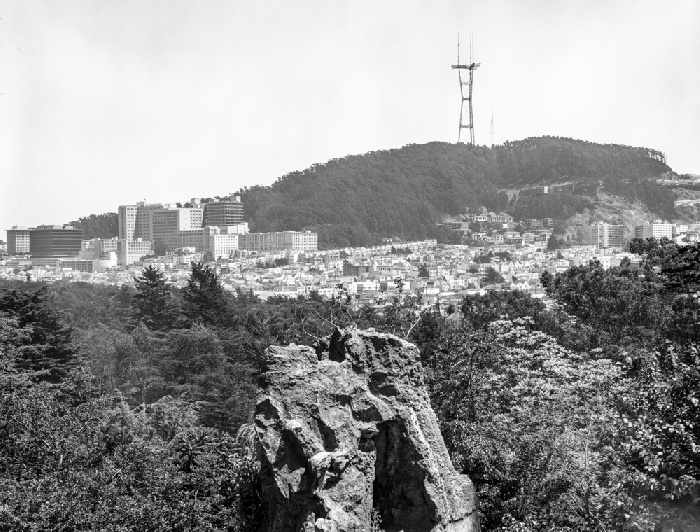 This image from 1973 finds Sutro Tower dominating the view atop Mt. Sutro. It was the tallest structure in San Francisco after it was completed in 1973 until very recently. The Inner Sunset has crept up the slopes of Mt. Sutro, particularly on the west side, and remains densely populated. The Affiliated Colleges building has now been obscured by the new UCSF Medical Center buildings. Within Golden Gate Park, the pump station is gone and tall trees (and a large rock) are all that can be seen.

In under 100 years, this view went from a few houses, some trees, and little else to the densely populated area you see now. Of course, all of the Outside Lands has undergone the same change. Golden Gate Park has been transformed from sand to the luscious greenery we have now. Happy 150th birthday Golden Gate Park!