Five months ago, back at the beginning of football season, I wrote a post about the San Francisco 49ers’ Kezar years. I wasn’t expecting to do another 49ers post anytime in the near future. However, two things have happened to change that plan. One, we uploaded 679 new 49ers images to OpenSFHistory earlier this week. And two, the 49ers are playing in Super Bowl LIV. So please indulge another 49ers post so soon. This time, I’m taking a closer look at the 49ers pre-NFL years.

With the NFL resisting calls to expand in the mid-1940s, a Chicago sportswriter, Arch Ward. already famous for originating the idea of baseball’s All-Star game, came up with the idea of starting a new professional football league. Ward put together some rich men to create eight teams for a new league dubbed the All-American Football Conference. One of those men was San Francisco lumber magnate Tony Morabito, who had been trying for some time to get an NFL team for the City. Thus, the San Francisco 49ers were born. 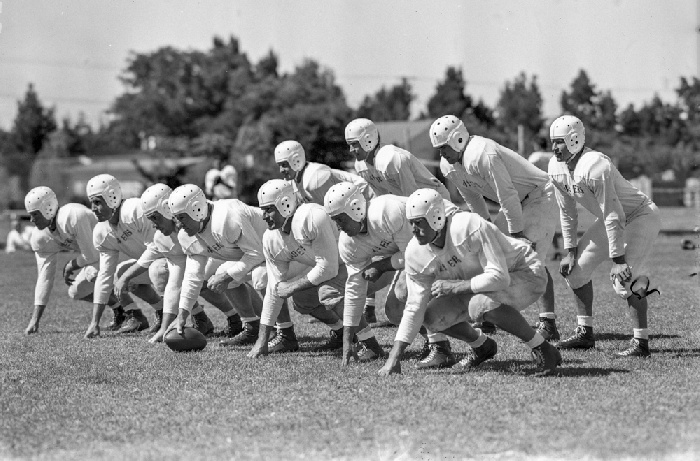 The AAFC was initially scheduled to debut in 1945. The 49ers hired noted local college football coach Buck Shaw to be their head coach. Shaw had famously led Santa Clara to two Sugar Bowl victories in 1937 and 1938, but lost his job when Santa Clara dropped its football program in 1942. When the AAFC’s start date was pushed back to 1946, the 49ers allowed Shaw to take the University of California, Berkeley head coaching gig for a year. Finally, in September 1946, the AAFC was ready to take flight. 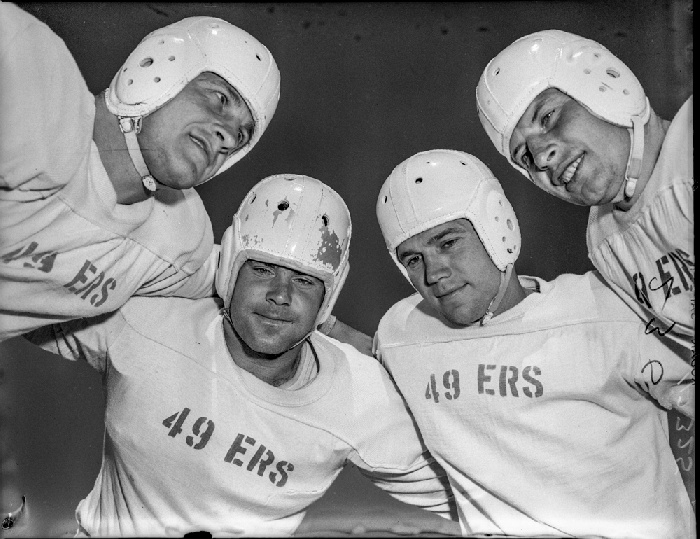 The 49ers were part of the AAFC’s West Division with the Cleveland Browns, Chicago Rockets, and Los Angeles Dons. The 49ers opened their first season on September 8, 1946 at their Kezar Stadium home against the New York Yankees. They would lose 21-7, but would fare much better during the rest of the season. They would beat the Los Angeles Dons twice during the season for West Coast supremacy. 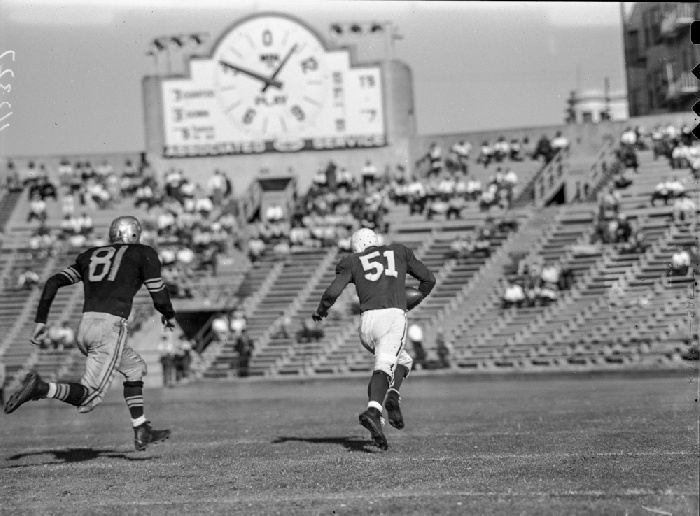 1946 was a good season for the 49ers. They finished 9-5 and outscored their opponents 307-189. Quarterback Frankie Albert finished 2nd in the league in passing yardage. Running backs Norm Standlee, John Strzykalski, and Len Eshmont finished with the 2nd, 8th, and 13th (respectively) most yards gained. Left end Alyn Beals tied for the league lead in receptions and was 2nd in receiving yards. The 49ers scored the 2nd most points in the league and gave up the 2nd least amount of points. You may have seen the theme here. The 49ers finished 2nd in a lot of categories. They also finished 2nd in the West Division to the league champion Cleveland Browns, who beat the East Division winner Yankees in the league championship game. 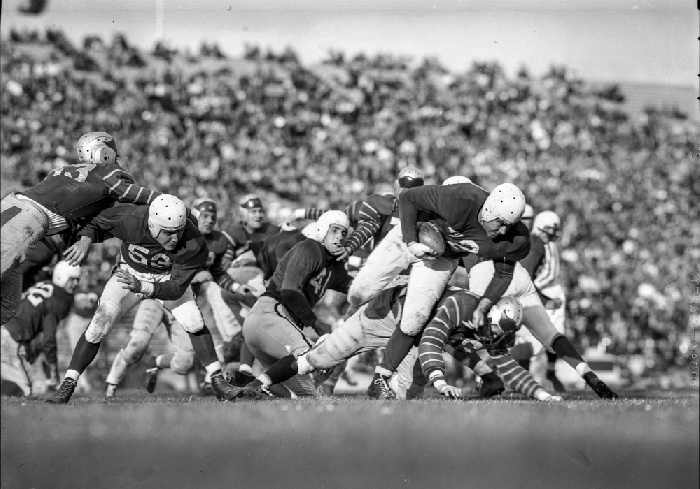 In a probable publicity stunt, the 49ers obtained the rights to legendary Army Heisman-winning running backs, “Mr. Inside” Felix Blanchard and “Mr. Outside” Glenn Davis in 1947. However, their attempt to get the Army to release them to play proved unsuccessful. The 49ers opened the 1947 season with a 23-7 win over the Brooklyn Dodgers at Kezar in front of over 31,000 people. They finished with an 8-4-2 record, but individual players did not finish as well as they had the prior year on the passing, rushing, and receiving charts. Once again, the 49ers ended up 2nd to the champion Cleveland Browns in the West Division. 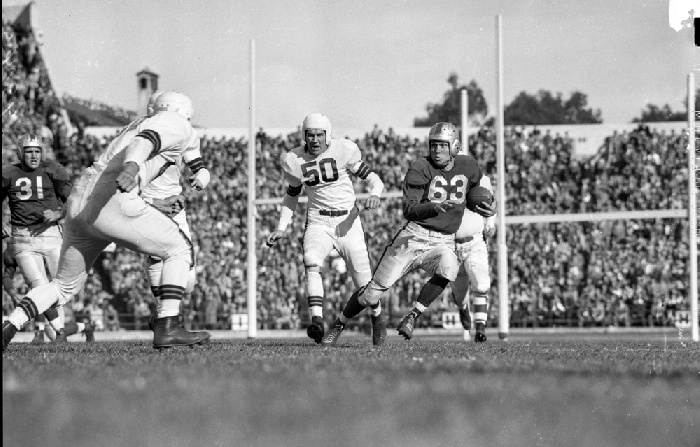 In 1948, the Niners had their best season yet, finishing with a 12-2 record. They scored 495 points during the season, over 100 more than any other team. Their rushing and overall offense was the best in the league. The season marked the debut of future Hall of Fame running back, Joe “The Jet” Perry, who gained 562 yards on only 77 carries. However, the two losses the Niners suffered that season were both to the undefeated Cleveland Browns, resulting in the 49ers finishing second in the West Division yet again. Despite having the second best record in the league, finishing second in the division meant the 49ers missed the playoffs. 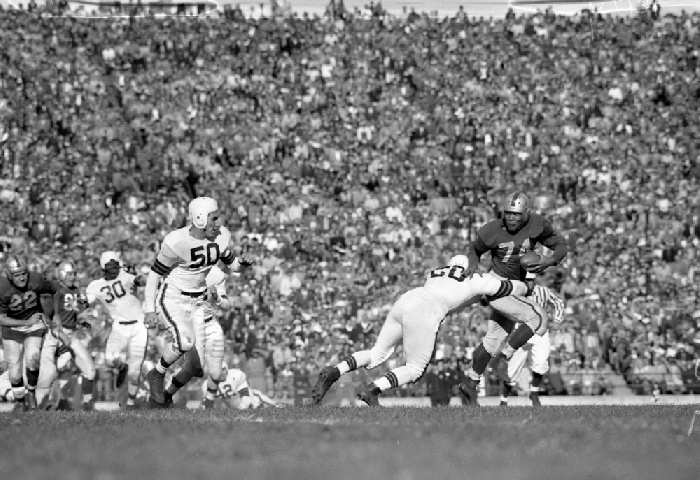 As the 1949 season dawned, the AAFC lost a team, so the league was reorganized as one, 7-team divison. As with the prior year, the 49ers again easily had the league’s best rushing offense and maintained the best overall offense. Joe Perry led the league in rushing yardage and had a league-best 6.8 yards per rushing attempt. The 49ers finished with a 9-3 record, which resulted in a, wait for it, 2nd place finish behind the Cleveland Browns. However, because the AAFC now only had one division, the 49ers were finally playoff-bound. In a new playoff format, the top four teams in the league made the playoffs. The 49ers beat the New York Yankees 17-7 in the first round, but fell to the Cleveland Browns 21-7 in the title game.

Two days before the AAFC championship game, the NFL and AAFC agreed to a merger. The 49ers, Browns, and Baltimore Colts would join the NFL and the AAFC’s Los Angeles Dons would merge with the NFL’s Los Angeles Rams under the Rams name. The remaining AAFC teams folded. The 49ers, one of the AAFC’s best teams, were a natural fit as a West Coast rival for the Rams. After four years, the AAFC was through and the 49ers would begin the 1950 season in the NFL as part of what was first called the National Conference and later renamed as the West Conference. The 49ers proved to be one of the best teams in the AAFC over those four years, but had the misfortune of being in the same division of an even better Cleveland Browns team in each of those years.