In 2019, our OpenSFHistory image collection grew by another 6000 images. These images span a 150-year time period from the 1850s to the early 2000s and cover nearly every inch of our great City. As 2019 comes to a close, I am looking back at some of my favorite images that were added to OpenSFHistory.org this year. There were too many great images to trim down to just five images, so we’ll do this in two parts. In this part 1, we look at some great images that were posted from January to June 2020. 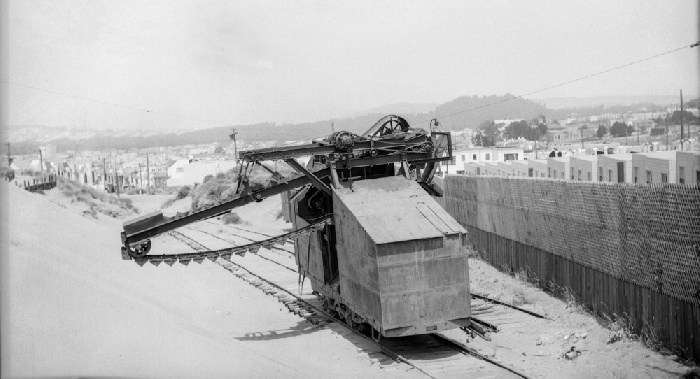 Looking north from 21st and Pacheco at Sand Conveyor Streetcar with Golden Gate Park and Strawberry Hill in background, circa 1935. (wnp14.2022; Courtesy of a Private Collector.)

OpenSFHistory.org has thousands of images of cable cars and streetcars. They come in variety of shapes and sizes, but this one stood out when I saw it. And there was a reason for that. This streetcar was specially constructed by the United Rail Road Company (“URR”) to gather sand at its sandpit located at 21st and Pacheco. Why was the URR gathering sand? The sand conveyor streetcar would load sand onto work cars that would then drop sand on to the streetcar tracks to add traction for the steel wheels of streetcars on the steel tracks. This helped with acceleration and braking. The 21st and Pacheco sandpit was closed in 1937 and this sand conveyor streetcar was moved to the Sutro Car Barn, where it continued to convey sand into the early 1950s. 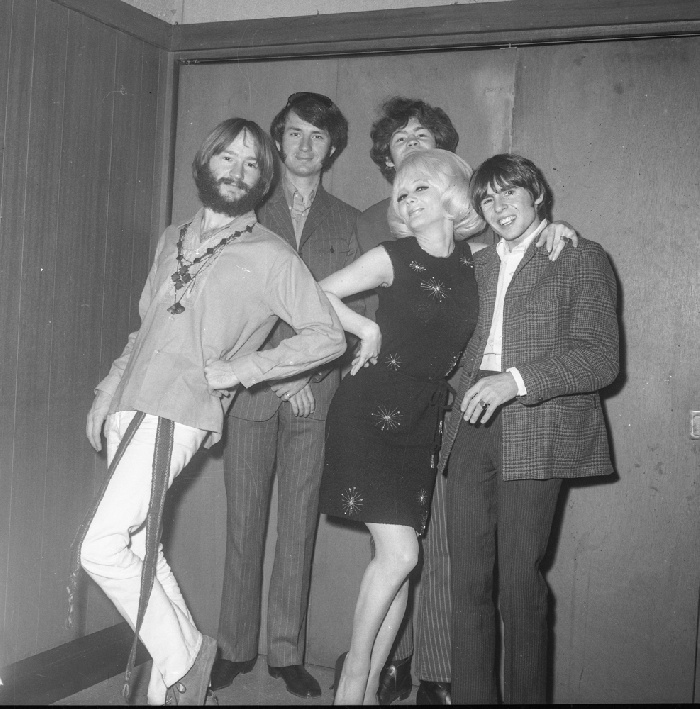 The Monkees and Carol Doda at Bardelli’s Restaurant, 1968. (wnp14.2367; Courtesy of a Private Collector)

In 1968, The Monkees were still at the height of their popularity with their TV show and albums. They were so popular the Gene Roddenberry added a charactor, Chekov, who looked like Davy Jones. Jimi Hendrix opened for them during a 1967 concert tour. When The Monkees came to San Francisco in 1968, they did what many young men did then…came to see Carol Doda. Doda was a go-go dancer at the Condor Club, located at the intersection of Broadway and Columbus Avenue. She caused a sensation in 1964 when she started dancing topless. The Monkees met up with Carol Doda at Bardelli’s Restaurant where this image was taken in 1968. Peter Tork and Davy Jones look like they are enjoying this interaction, while Michael Nesmith looks like he is ready to leave and Mickey Dolenz is just trying to be seen. These were surely not the only pop stars that got an introduction to Doda, but you don’t often see images from these meetings. 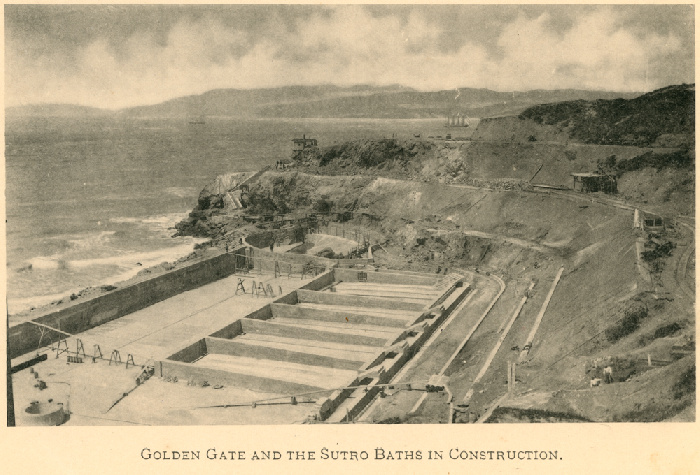 We have many, many images of the Sutro Baths on OpenSFHistory.org. The Baths opened in 1896, became an ice rink in the 1950s, closed in 1964, and then burned down in 1966. The Sutro Baths ruins are now part of the Golden Gate National Recreation Area. However, while we see lots of images of the finished Sutro Baths, pictures of its construction are rarer. The above image was taken in 1893. It gives you an idea of what lies beneath the pools of water you see at the site today. The trees on the hill above the site are much smaller than they are today and gives you an idea of how much they have grown in the 100+ years since then. 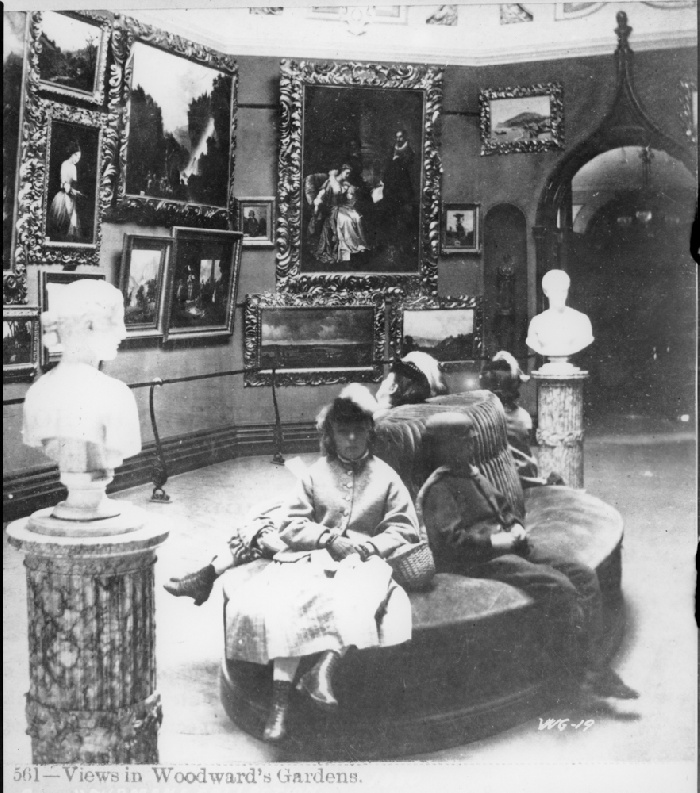 Woodward’s Gardens was the brainchild of Robert Woodward, a San Franciscan who became wealthy during the Gold Rush. He turned his Mission District estate into essentially the 1860s version of an entertainment complex after he moved to Napa. Woodward’s Gardens featured gardens (of course), a zoo, an aquarium, and an amusement park. Along with these attractions was a serious art gallery as seen in the 1869 image above. The art gallery may not have been very popular with the children though. The children seated on the settee here look pretty bored. Woodward’s Garden lost popularity after Woodward’s death in 1879 and finally closed in 1891. 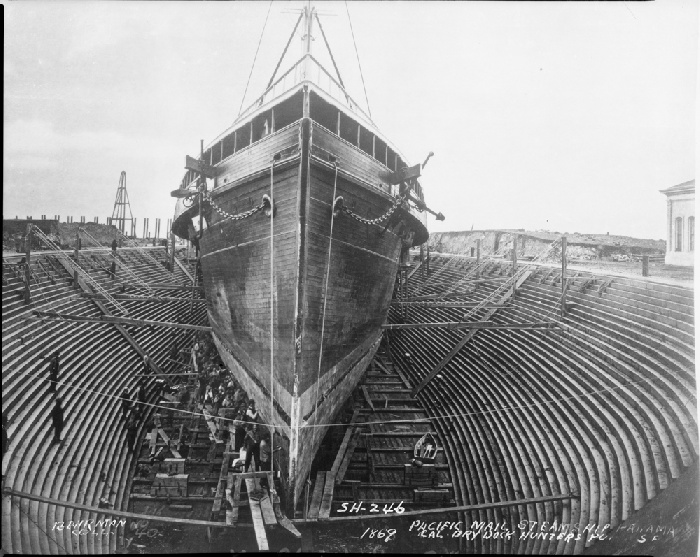 Hunters Point was a major shipyard for over 100 years at the southeast corner of the City. We have a number of images of the shipyard on OpenSFHistory.org, but this is one of the earliest. The ship is called the Panama and it was a Pacific Mail Steamer. It sits here in the Hunters Point drydock in 1869, where a large number of workers are hard at work on the starboard side hull. The contrast between the men and the ship gives an appreciation of how big the ship was and a little bit of awe over their ability to get a ship of this size into a drydock and do this work under the conditions and equipment that they had 150 years ago. This image, as well as the Woodward’s Gardens image above were both taken by famed photographer Eadweard Muybridge. The point of view on this image of the Panama gives it a commanding presence.

These are five of my favorite images that we posted in the first half of 2019, but there are a lot more great images among the 6000 added this year. I would encourage you to dig deep into the OpenSFHistory collection as there is much to glean. I’ll have a look at five more favorites, this time from the second half of 2019, next week.