The NFL enters its 100th season this week. The San Francisco 49ers are about to begin their 70th season as part of the NFL tomorrow. These days, the 49ers play their home games at a cushy, still new stadium in Santa Clara. For the first 24 years of their existence, however, the 49ers battled their opponents in the southeast corner of Golden Gate Park in Kezar Stadium. 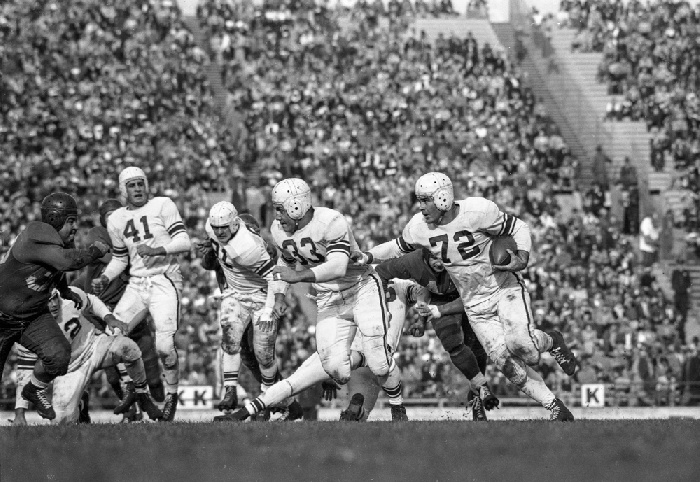 The 49ers began existence in 1946 as one of eight teams in the inaugural season of the upstart All-America Football Conference. As Kezar Stadium had a capacity of nearly 60,000 people, it was the natural choice for their games. The 49ers were pretty successful, finishing with winning records each year of the AAFC’s existence. Unfortunately, they played in the AAFC’s Western Conference in which the Cleveland Browns and their all-time great quarterback, Otto Graham, were also located. Consequently, the 49ers finished second in the Western Conference each year and missed the championship game featuring the best team in each conference, despite finishing with the third best record in the league in 1946 and 1947, and the second best record in 1948. In fact, the 49ers entered November 1948 as an undefeated team, but two close losses to Cleveland in November dropped them behind the undefeated Browns in the standings.

Due to mounting financial problems, the AAFC lost a team before the 1949 season, and played as a seven-team, one division league. On October 9th, the 49ers ended the Browns undefeated streak that had carried over from the prior season with a convincing 56-28 win at Kezar. They finished the season in second place behind the Browns yet again, but because the league was only one division, the top 4 teams all made the playoffs. The 49ers hosted the third place New York Yankees at Kezar on Sunday, December 4th in their first ever playoff game and beat them 17-7. They travelled to Cleveland the following Sunday for the AAFC Championship game, but, as they had in each prior AAFC season, the Browns prevailed 21-7. 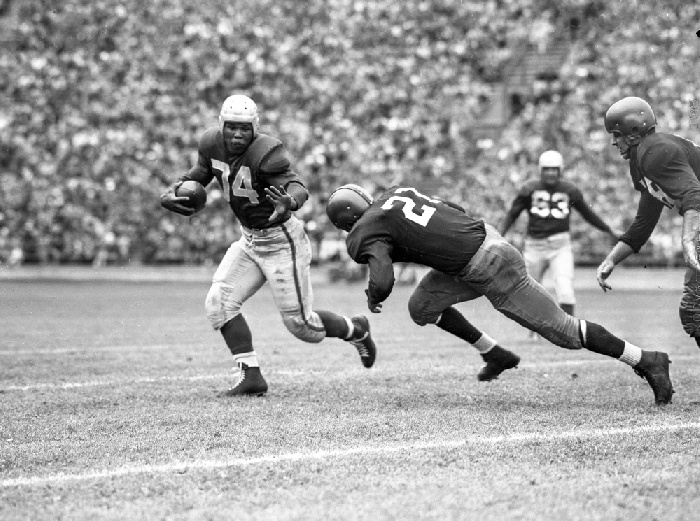 Just prior to the 1949 AAFC Championship Game, the AAFC and the NFL agreed to merge their leagues. The San Francisco 49ers, Cleveland Browns, and Baltimore Colts joined the NFL, while the Los Angeles Dons merged with the NFL’s Los Angeles Rams franchise. The other three AAFC teams were disbanded. The 49ers first season in the NFL in 1950 did not go well, as they finished with a 3-9 record in the Western Conference. However, with the exception of a poor year in 1955, they finished either second or third in the west in five of the next six seasons.

In 1954, the 49ers signed running back John Henry Johnson to join a backfield that already featured quarterback Y.A. Tittle, and running backs Joe “The Jet” Perry and Hugh McElhenny. Johnson, a college star at Arizona State, had initially spurned the Pittsburgh Steelers who had drafted him, to play football in Canada, where his performance earned him MVP honors. 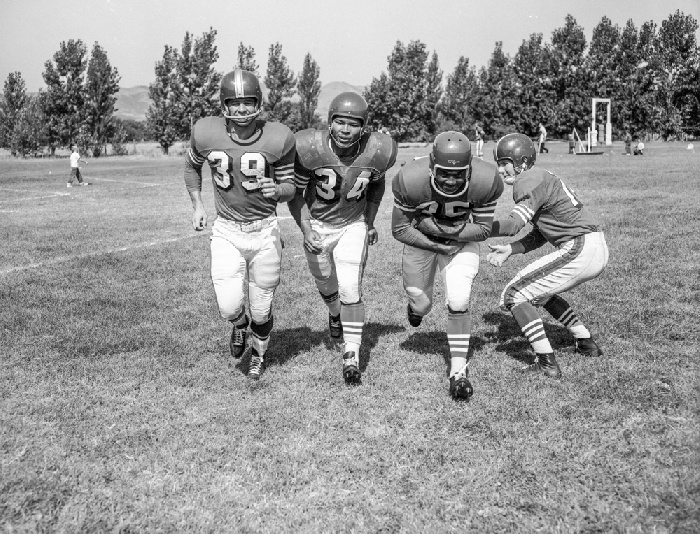 Tittle, Perry, McElhenney, and Johnson would become known as the “Million Dollar Backfield.” The moniker was the brainchild of a 49ers PR man, Dan McGuire. Though they only played together for three seasons, all four would eventually be enshrined in the Pro Football Hall of Fame and is the only “full house” backfield (a formation where three running backs line up behind the quarterback) where each member ended up in the Hall of Fame. In the 1954 season, Perry and Johnson finished first and second in the league in rushing. Injuries limited Johnson the next two seasons though and he was traded to Detroit following the 1956 season. 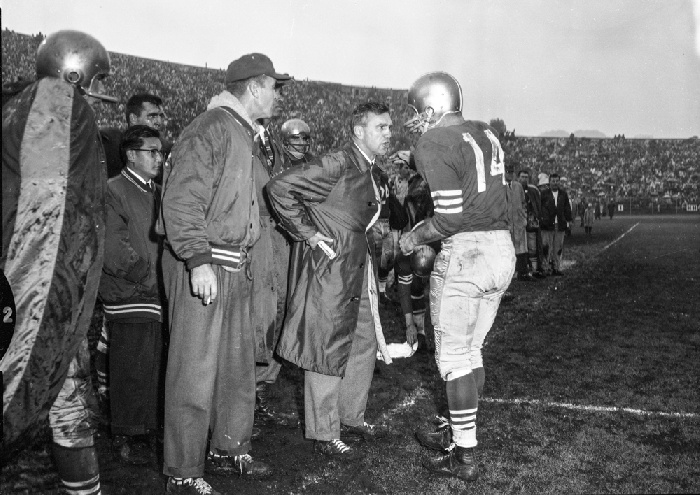 Going into the final game of the 1957 season, the 49ers and Lions were tied atop the Western Division standings. Detroit beat Chicago, so the 49ers needed a win over Green Bay to remain tied for first place. The 49ers started rookie John Brodie at quarterback and he looked good early on, leading the team to two early scores and a 10-0 lead. The second quarter was all Packers though as Bart Starr passed and ran for touchdowns and the Pack added two field goals for a 20-10 half-time lead. At half-time, 49ers head coach Frankie Albert called upon the “Old Man” as the newspaper reports described then 31-year-old quarterback Y.A. Tittle. Tittle lead the team to 17 unanswered 2nd half points for the 27-20 victory. Joe Perry rushed for 130 yards on 27 carries and scored both 2nd half touchdowns for the Niners. The Kezar crowd was jubilant as the result meant the 49ers would play in their first NFL playoff game the following Sunday right there at Kezar. 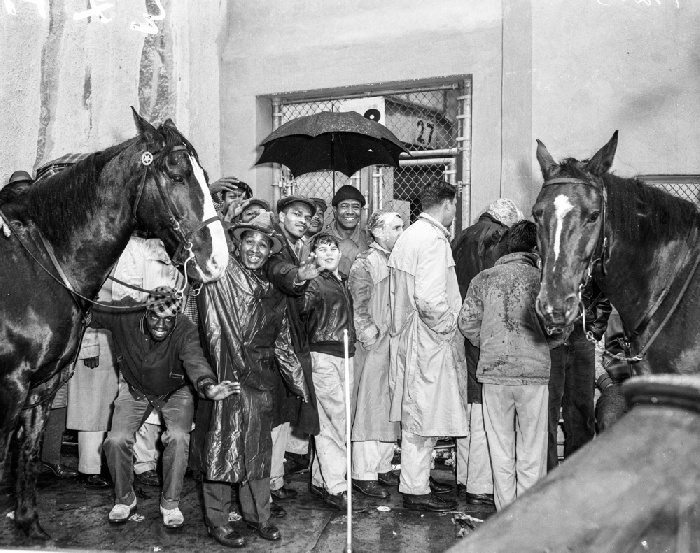 On Saturday, December 21, 1957, the 49er faithful lined up in the rain at Kezar Stadium to buy up the remaining tickets for the playoff game against the Lions. The 2400 tickets sold out in a few hours. Unfortunately, the game the next day was almost the exact opposite of the win over the Packers the week before. The 49ers built a commanding 24-7 half-time lead behind three touchdown passes by Tittle. They then increased the lead to 27-7 with an early third quarter field goal. But the Lions came roaring back. Taking advantage of fumbles by Tittle and Perry, the Lions scored 24 straight points to win the game 31-27. 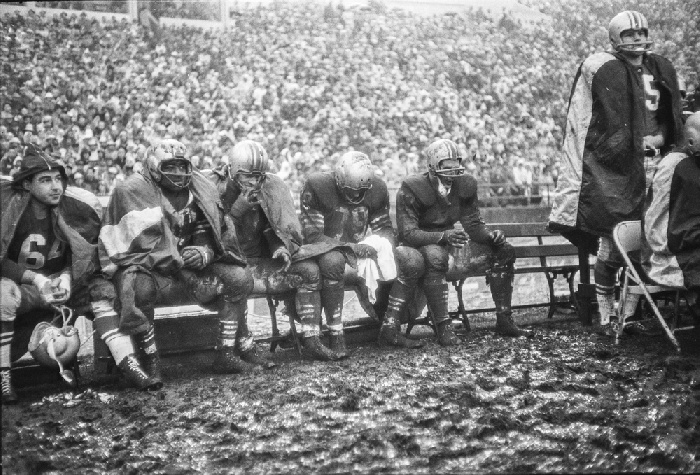 For the next 12 years, the 49ers would remain shut out of the playoffs. The closest they would come was a Western Division second place finish in 1960, in which a late season 13-0 loss to the Packers at Kezar would result in Green Bay finishing one game ahead of San Francisco. The 49ers finished in last place in the seven-team Western division in the 1963 and 1964 seasons, and, after expansion and realignment into four-team divisions, again finish last in the 1969 season as part of what was then called the Coastal Division. 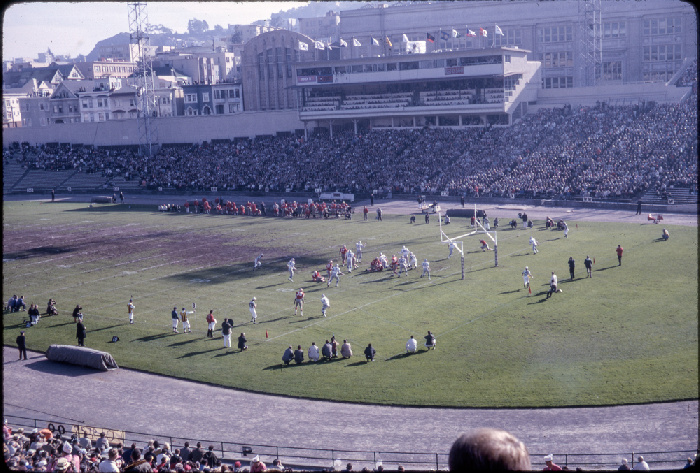 Under coach Dick Nolan, the Niners finally returned to the playoffs at the end of the 1970 season. One year after a last place finish, they completed a 10-3-1 season in what was called the NFC West Division, following the NFL-AFL merger. In the first round of the playoffs, the 49ers went into Minnesota to face the Vikings, who had finished with a league best 12-2 record. Despite being the underdogs, the 49ers prevailed 17-14. The following week, San Francisco hosted Dallas at Kezar Stadium in the NFC Championship game. It was the first of three straight years that the 49ers and Cowboys would vie in the playoffs, each one with the same result. On Sunday, January 3, 1971, the Cowboys came to Kezar and squeaked by the 49ers 17-14. It would be the last game the 49ers would play at Kezar Stadium as they moved into the more conveniently located Candlestick Park the following season. Kezar’s place as the home to a National Football League team came to a close after 24 seasons.