So many OpenSFHistory images drop us into a yearning to know more: mysterious people, interesting compositions, unidentified events… Sometimes—even knowing the place, person, or event—we are left confused and captivated. Just looking at Golden Gate Park’s Music Concourse over the years I find favorite images that have little to do with its well-known institutions, landscaping, statues, and structures. Here are five favorites: 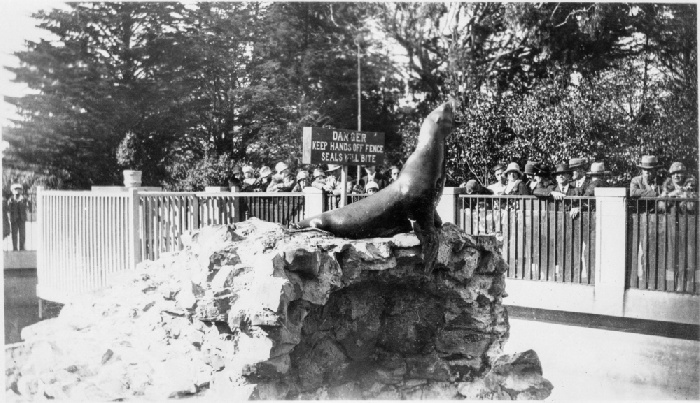 Seal and Sea Lion Grotto in courtyard of California Academy of Sciences in 1927. (wnp27.1301.jpg, Courtesy of a private collector.)

John Martini wrote a nice short article on the grotto of pinnipeds that was in front of the Academy of Sciences from the 1920s to the 1950s, but it is still an eyebrow-raiser for me to come across new snapshots. I doubt the poor animals were very happy; the barking must have resonated through the Richmond and Sunset Districts. 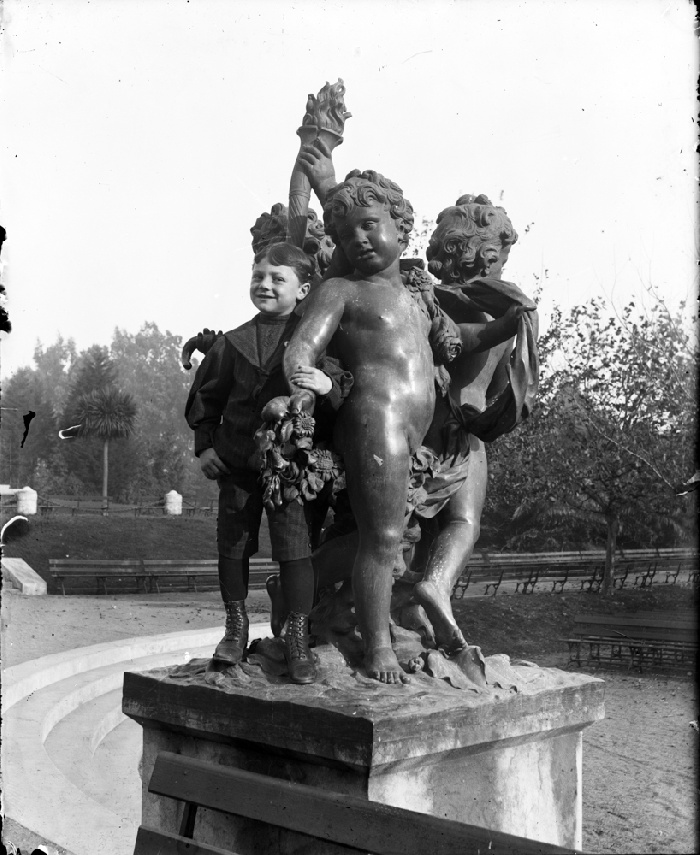 Jefferson Peyser, circa 1905, in front of Spreckels Temple of Music band stand. (wnp15.177.jpg, Courtesy of a private collector.)

You can learn more about the boy, Jefferson Peyser, and his fashionable appearances throughout our collection, in Nicole Meldahl’s great article. His grinning face among the cherubs on this statue is like a 1905 version of playing “Where’s Waldo?” And what ever happened to this statue? 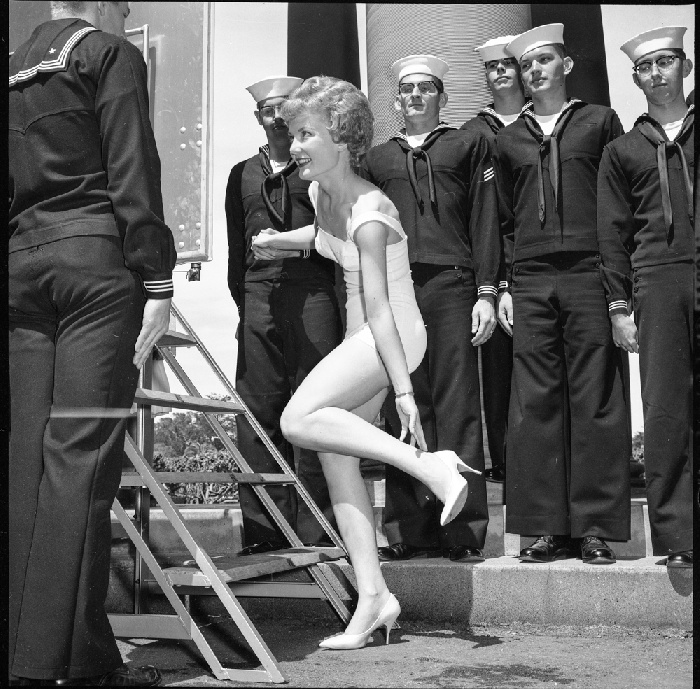 No way the Miss San Francisco beauty pageant—with swimsuit competition—would be staged in the bandshell these days. (Miss Chinatown still goes on, however.) This is a great if, I suspect, highly staged, photograph of sailors trying to appear not to check out contestant Mary Ann Nelson on her way up to the stage. Lana Green won the crown in 1961. 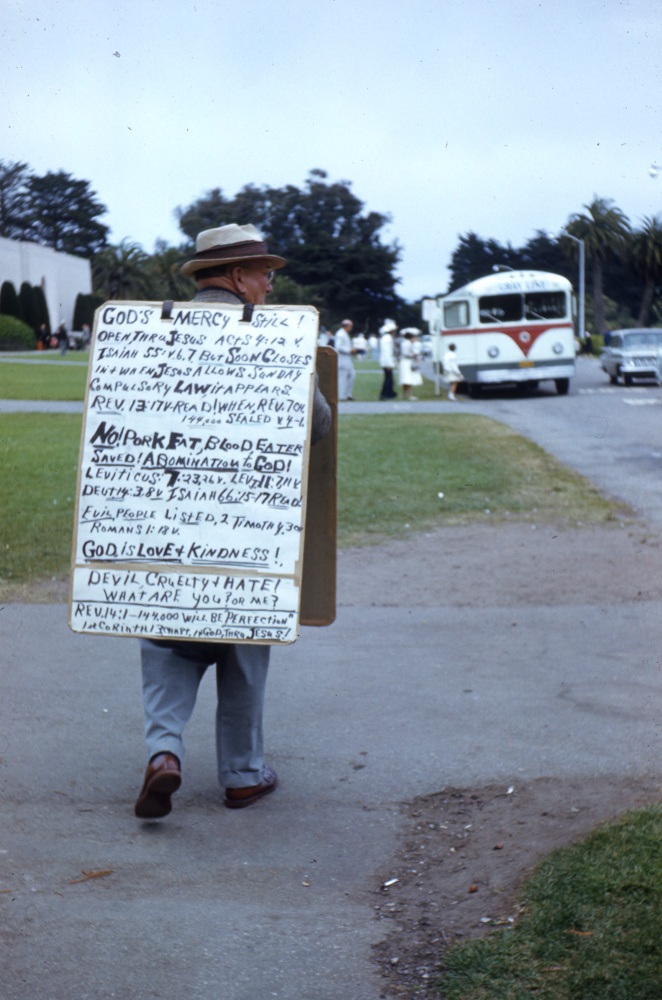 Signboard preachers like the gentleman above are still with us, but why did this guy choose to spread the gospel in the Music Concourse? Those tourists boarding the Gray Line bus in the background are a meager audience. Even back in the 1950s, the Market and Powell Street cable car turnaround and Union Square were the places for scrawled-out scripture sharing. Someone needs to tell him the good news. 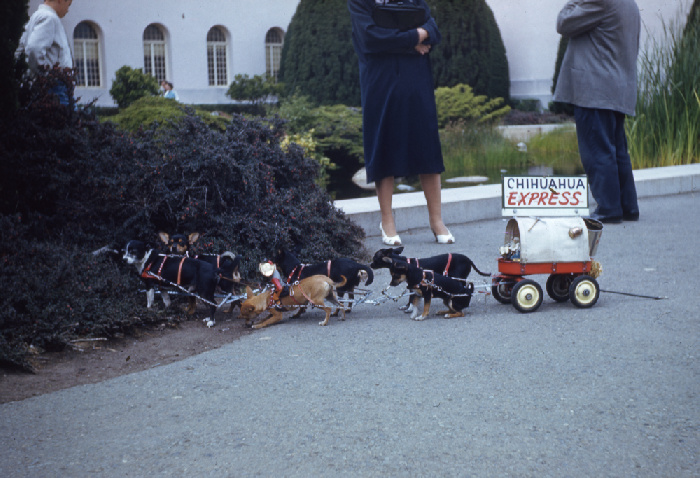 I don’t know any more than you do about this slide, but it seems that the Chihuahua Express is about to go off-roading.

Here’s a bonus doggy image in the Concourse, courtesy of Greg Gaar. I wish I had known this woman for some reason: 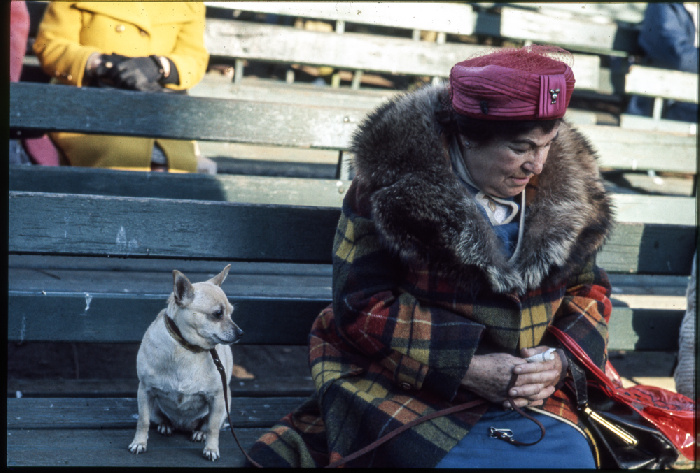