Seventy-five years ago this past Sunday, this beautiful photograph taken by Moulin Studios captured a Union Square very familiar to many San Franciscans of a certain age. 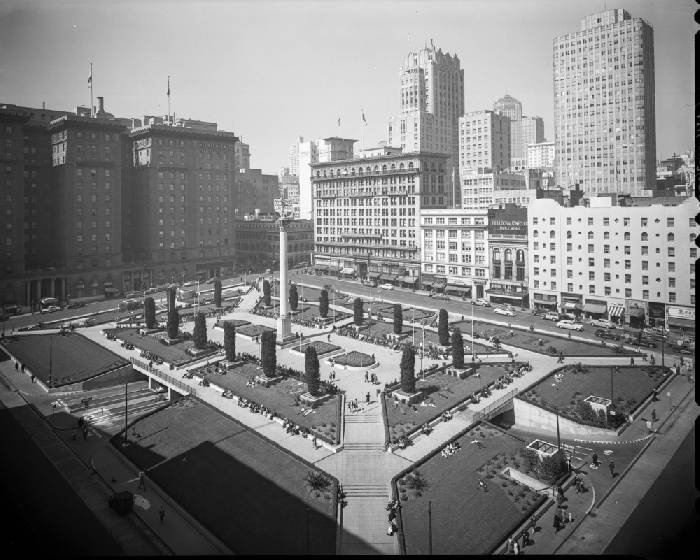 Post Street as seen here is much changed from the 1940s. The old Fitzhugh Building on the northeast corner of Post and Powell is long gone and the corner is now the home of a Saks Fifth Avenue. The Stockton Street corner is today a glass box Apple store. But the St. Francis Hotel still rules with sophisticated benevolence from the west, the Sir Francis Drake tower, not very old at this time, is visible with its cocktails-and-swing-bands charm in the center distance, and the square itself, with the pathways, garage portals, and Dewey Monument, is instantly recognized.

As the San Francisco’s center of tourist and shopping activity for a century, Union Square is very much the face the city shows the world, and the square’s layout and design have changed a few times. For most of my life, the sloping lawns seen in the photograph above were an unruly nightmare of hedges which one kept a healthy distance from upon passing. A twenty-first century face-lift brought in wide stadium steps up the square itself and a renovation of the underground parking garage. This is what Union Square looked like a few years before the 1940s garage installation: 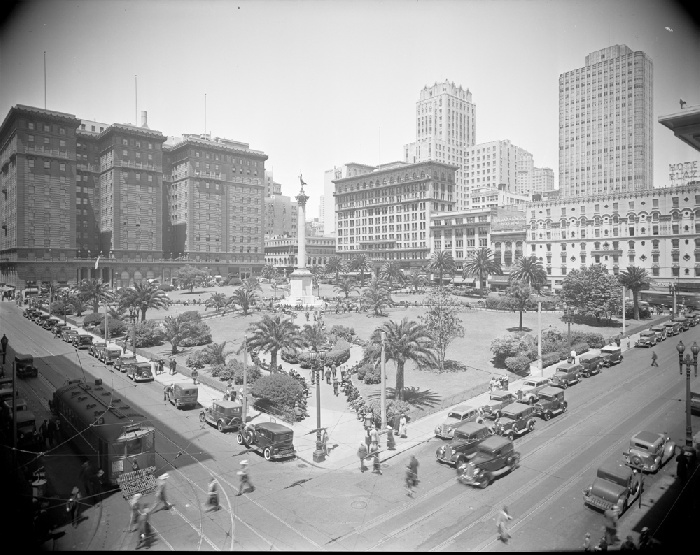 As part of OpenSFHistory’s collection of negatives we scanned from SCRAP are 65 photographs documenting the making the Union Square Garage over 1941 and 1942 by the firm of MacDonald & Kahn. It’s creation was hailed as an engineering marvel of the time. 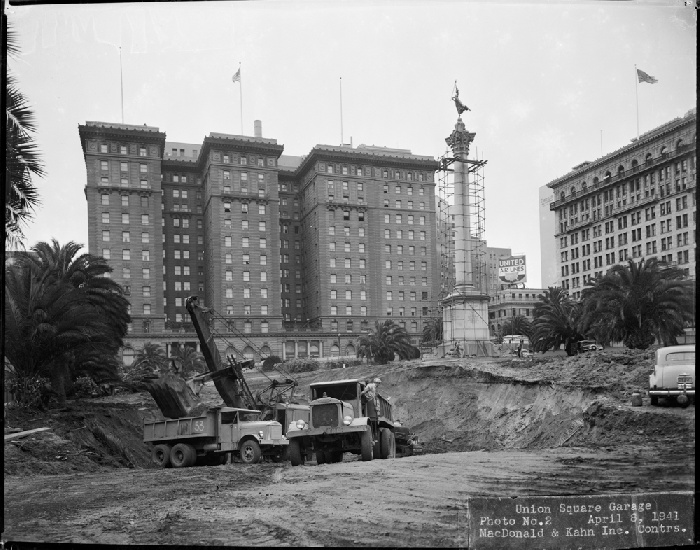 Note the mature palm trees on the edges of the square, doomed to give way to construction and sleek design aesthetics of the midcentury. New palms would be planted at the corner entryways, however.

The construction equipment at times look like child’s toys left at a sandy beach. In the early 1850s, massive sand hills still covered this area. 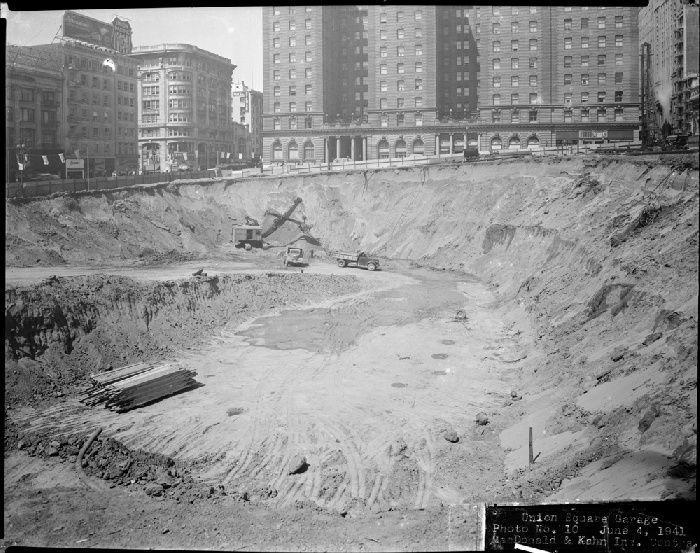 While I know it’s an unfair comparison, after years of navigating the construction of the never-to-be-finished Central Subway along Stockton Street, it’s a marvel to watch how quickly the work by MacDonald and Kahn was done. Here are the forms already shaping up in October 1941, as seen from the Elkan Gunst Building on the southwest corner of Powell. 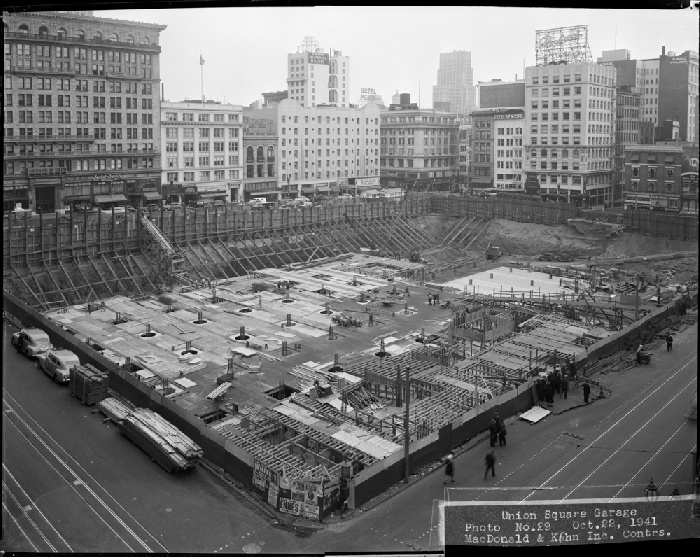 And most of the work done, with the Dewey Monument back in place, by June 1942! 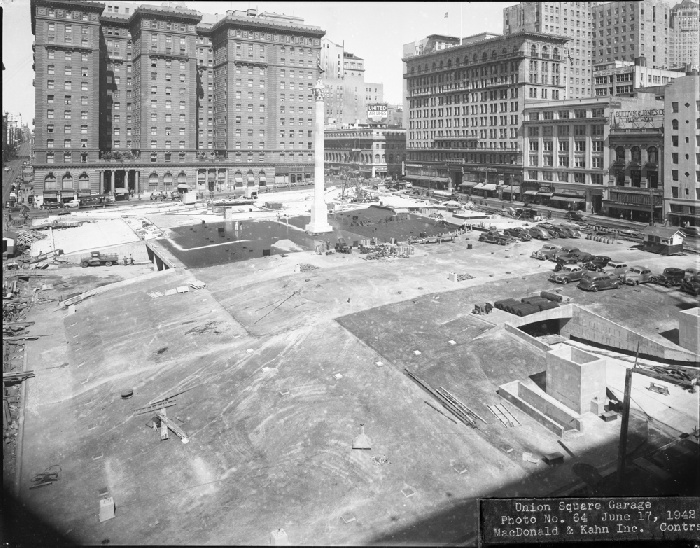 Take a look at all the construction photos.

Ask anyone what they know of San Francisco and one of the first things they will mention is earthquakes. While earthquakes do happen all the time here, most of them are small. For San Franciscans, it is business as usual when the everyday variety earthquakes hit.

However, about every other generation or so, the large earthquakes will hit, causing destruction, chaos, and death. In October 1868, it was an approximate 6.7 magnitude earthquake on the Hayward fault. Then it was the large 7.9 quake and resulting fire in April 1906 that destroyed much of San Francisco. Many of us today remember the 1989 Loma Prieta quake that caused an estimated $6 billion in damage and killed 63 people.

Sixty-two years ago, on Friday, March 22, 1957, at approximately 11:45 a.m., a 5.3 earthquake struck the San Francisco area. The epicenter was close to that of the 1906 earthquake and was the largest earthquake since 1906. One person was killed and dozens injured. It was preceded by a number of foreshocks and aftershocks continued into the following day. 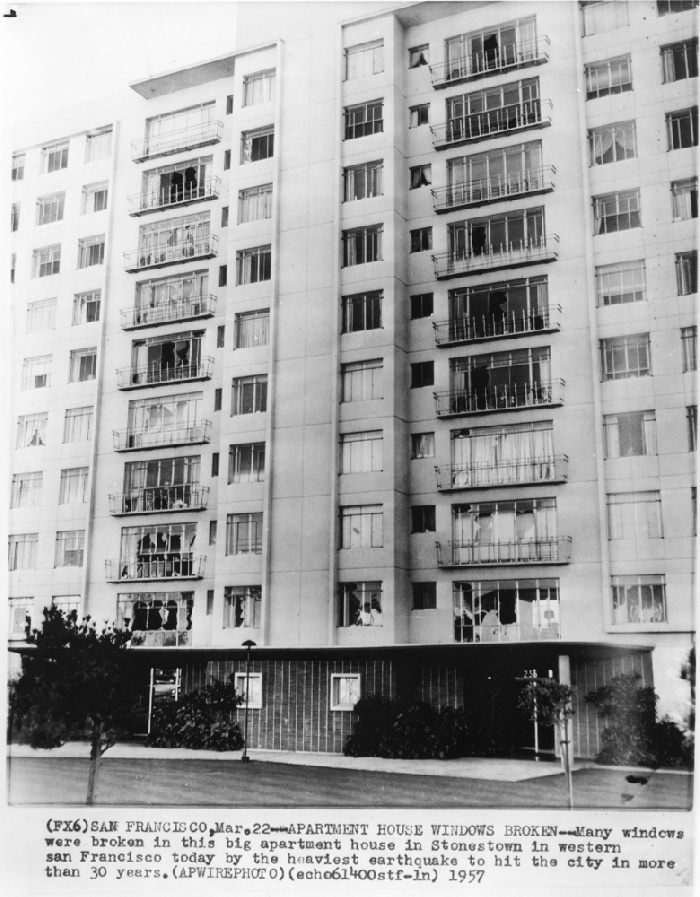 While there are still people around who lived through it, the 1957 earthquake is not as remembered as others because it did not cause as much damage as other large earthquakes. Most of the destruction was to the Lake Merced and Daly City areas with damages totaling about $1 million.

While the damage to the area was not as severe as from other earthquakes, the strength of the earthquake set the area abuzz. The San Francisco Chronicle March 23, 1957 headline screamed, “Big New Quake, Damage Huge, Many Hurt, Fire.” The same day, the top half of the first page of the San Francisco Examiner announced, “38 Quakes! Heavy Damage in S.F.! Many Injured in City, Fire in Mission Area.” The Call-Bulletin simply stated, “Big SF Quake” above the masthead. Below the masthead, the secondary headline said, “Many Hurt, Damage Heavy Around Bay.” 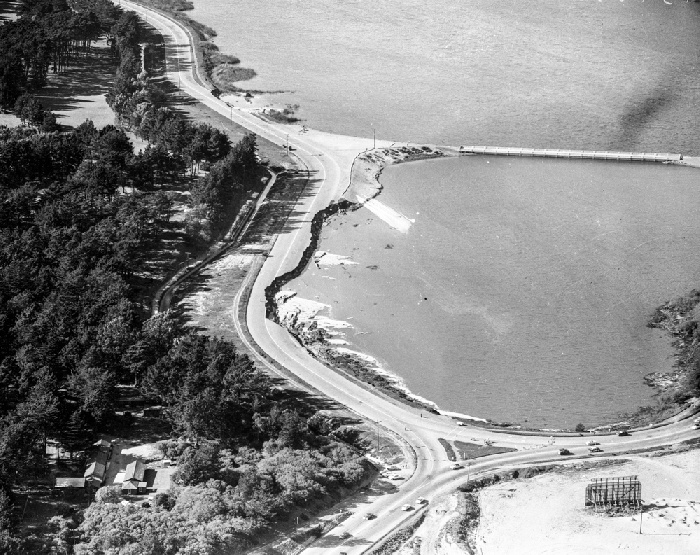 The earthquake caused evacuations in Daly City because of a rupture in a reservoir. A fire broke out on Market Street because of a broken gas main. Many stores had their wares strewn about. San Francisco’s phone system was overloaded with calls for assistance and Mayor George Christopher had to make a plea to the public to stop calling. Plaster fell at the San Francisco Airport and City Hall. Most of San Francisco’s schools were at least temporarily evacuated. For the first time since the 1906 earthquake, the clock at the Ferry Building stopped.

Around Lake Merced, there was a partial footbridge collapse and part of John Muir Drive at the southern end crumpled into the lake. Further south, part of Highway 1 caved into the ocean and landslides blocked other portions of the highway. An apartment building near the five-year-old Stonestown Shopping Center suffered a number of broken windows. 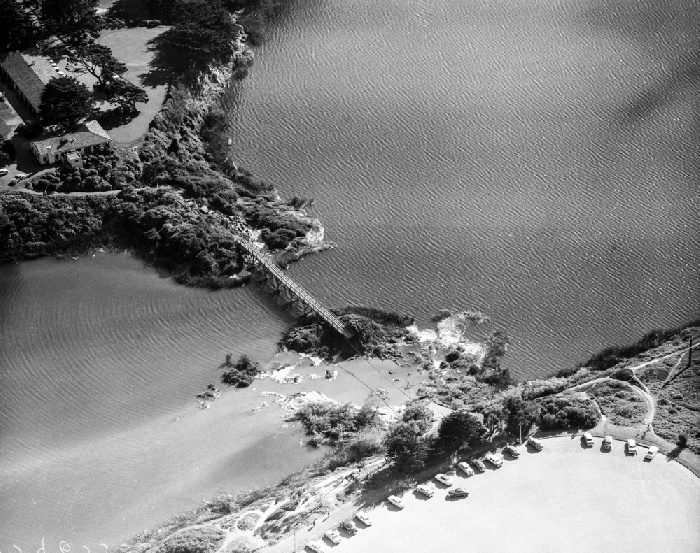 The earthquake also interrupted the high profile murder trial of Rose Lucas, accused of killing her husband, a highway patrolman. According to the San Francisco Chronicle report, when the earthquake hit, Mrs. Lucas shrieked that she wanted her kids, causing her two adult sons to vault the railing and come to their mother’s side. San Francisco Superior Court Judge Walter Carpeneti looked “pale as death” according to the Chronicle and recessed the trial until the following Monday. Mrs. Lucas would later be convicted of manslaughter.

The 1957 earthquake may not call to mind the horrors experienced by those of the bigger 1906 and 1989 earthquakes, but was nonetheless a vivid memory for those who lived through it. Ten years ago, Jo Anne Quinn compiled a number of recollections of the 1957 earthquake for the Western Neighborhoods Project website. The memories came from students at St. Cecilia’s Grammar School, who were evacuated to their schoolyard. You can see those memories at OutsideLands.org 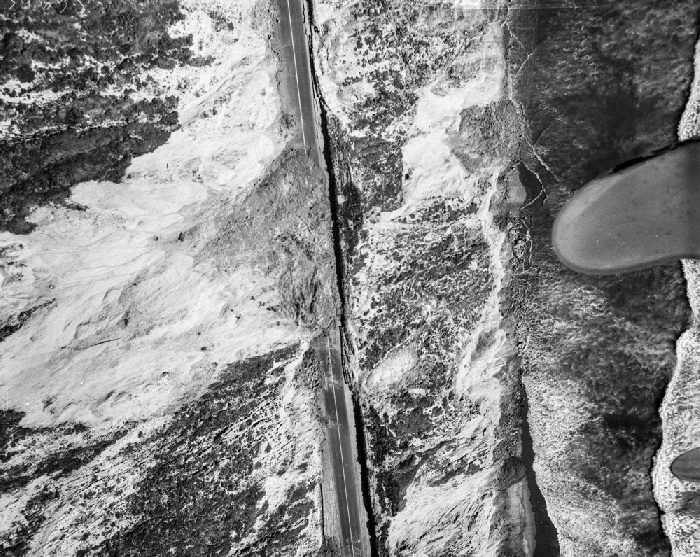