We depend on individual donations to survive. Please Donate any amount to help keep this non-profit effort going.
by John Martini

Among the photos currently being catalogued for OpenSFHistory is a set of curious images taken in 1934 showing a train being loaded onto a barge in Tiburon and ferried across the bay. At first glance you might wonder why these would be included in a photo archive focused on San Francisco history. While train and ferry operations are cool, 1930’s railroading in Marin County seems a bit far afield from our usual scope. 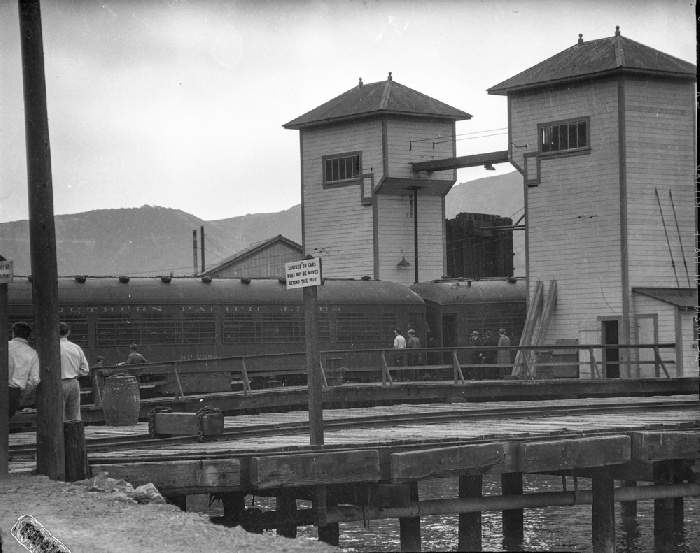 Federal prisoners arriving by train to be loaded directly on railroad barge bound for Alcatraz prison, August 22, 1934. (wnp14.3035; courtesy of a private collector)

When the United States Department of Justice acquired Alcatraz from the U.S. Army in late 1933, the announced purpose was to house the nation’s most dangerous and devious federal inmates. As Director James Bennett of the Bureau of Prisons colorfully put it, the islands population would include the “desperados, irredeemable, and the ruthless.” 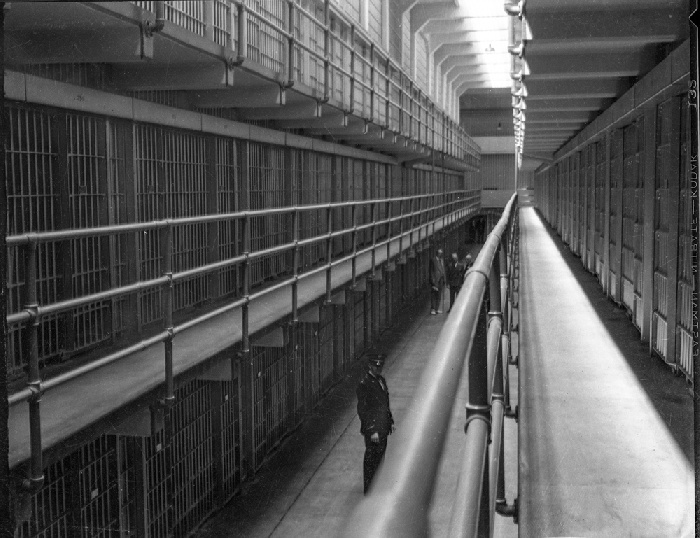 The first occupants of the new super maximum-security prison were actually 32 military convicts left behind when the military vacated the island. Bringing in prisoners from other federal prisoners across the country would be a tricky affair, though, because the risk of escape attempts was always present. The solution was to create heavily guarded prison trains, with bars welded over the windows and convicts securely handcuffed to their seats for the entire journey. Armed federal marshals ensured there’d be no attempts at mass breakout from the train cars. At each stop for water and fuel, a cordon of federal agents armed with machine guns surrounded the train, thwarting attempts by curious onlookers to approach the train.

The first convicts arrived on August 11, 1934. Brought down quietly from McNeill Island in Washington State, the initial “chain” of fourteen prisoners was brought to Oakland via train and transported to the penitentiary on the island’s motor launch. Only after they were safely ensconced in their cells did the newspapers get wind of their arrival. 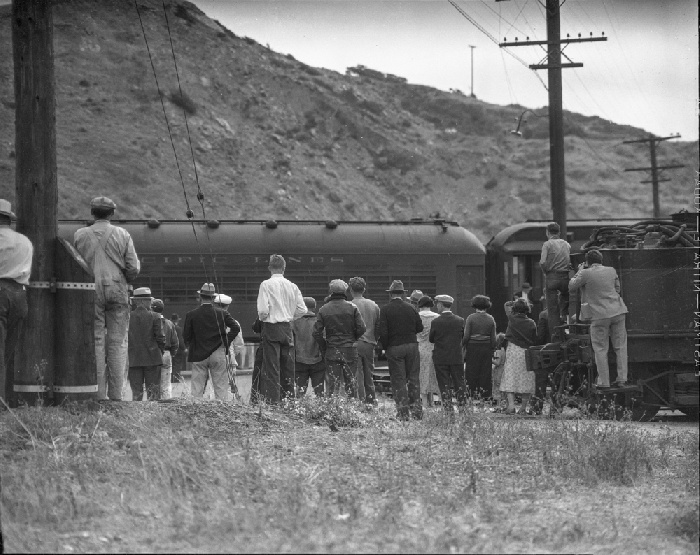 On August 22, another trainload was scheduled to reach Alcatraz and this time the media was awake. Massive publicity surrounded the departure of 53 men from Atlanta Federal Penitentiary, and reporters staked out the railroad terminal at Oakland anticipating the train’s arrival.

The train reached Martinez just before 6:00 a.m. on August 22, 1934, three and a half days after it left Atlanta. “News of its arrival immediately set federal and local authorities on edge throughout the Bay district. It was assumed that either Richmond or Oakland would be made the point of transfer to the Alcatraz Island tug.[…] It was at these points that gangster gunplay was expected,” the Oakland Tribune reported.

Staying a step ahead of the press and breakout conspirators, the prison authorities rerouted the heavily guarded train off the main line and sent it south to the little railroad town of Tiburon. There, the three-car train—minus its locomotive—was rolled onto a railroad barge and towed to Alcatraz by a tugboat. 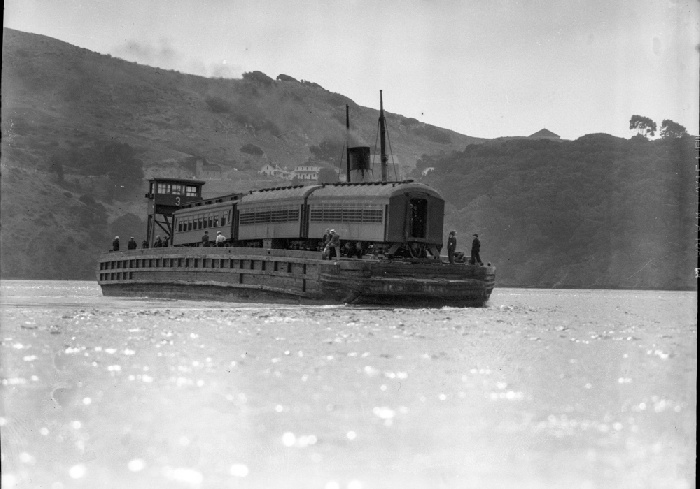 Not to be outdone, news reporters chartered boats of their own and dogged the barge and train all the way to the island. Kept at a distance by a Coast Guard cutter and the Alcatraz launch, the press photographers snapped pictures of the train loading at Tiburon, departing the ferry slip, and crossing the bay, passing the partially completed Golden Gate Bridge en route, and finally tying up at the Alcatraz dock. 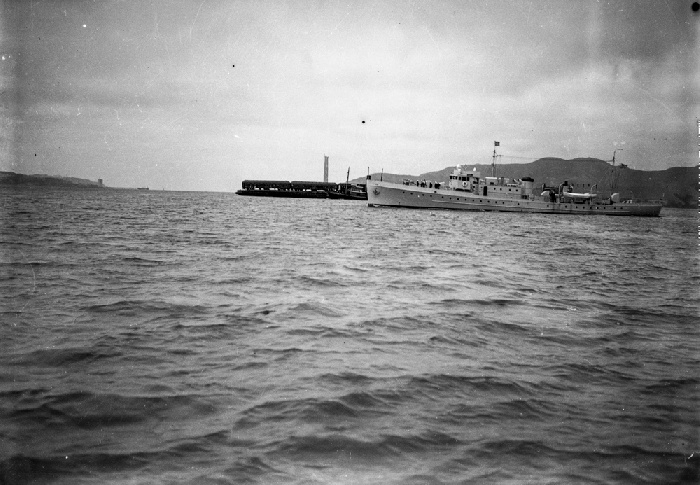 Prisoners being transported from Tiburon to Alcatraz in train on barge. Coast Guard Cutter Daphne, WPC-106, in foreground. August 22, 1934. (wnp14.3029; courtesy of a private collector)

Once on the island, the federal marshals guarding the train turned over their human cargo (referred to in official documents as “53 crates of furniture”) to the Alcatraz correctional officers. We can only imagine the physical and psychological condition of the inmates at the end of their cross-country, height-of-August-heat, chained-to-their-seats train trip.

Once off the barge, the island guards shackled the weary convicts together into a long line, with each man chained to the prisoner in front of and behind him. Then began a circuitous march around the island’s perimeter road and up to the back entrance of the cellhouse on the summit. Guards armed with machine guns lined the route, which led right past the windows of the island’s civilian residents. 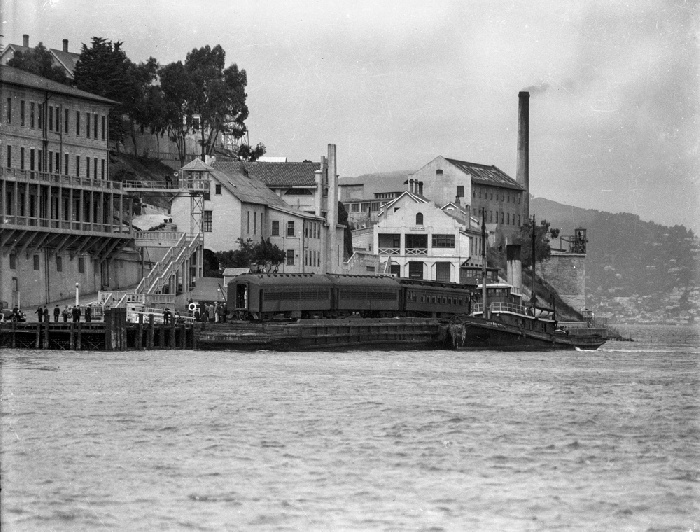 The family population of Alcatraz had been given strict orders not to leave their residences until the convicts were safely locked in their cells; no hostage situations were going to mar the penitentiary’s opening day. But the rules didn’t say anything about watching the passing parade of prisoners.

The civilians peeked through curtained windows and carefully scrutinized the faces of the convicts as they shuffled up the road outside their houses. They had a very good idea of who should be in that chain. The newspapers had been full of rumors since the train left Atlanta four days previously.

Teenager Mary Elliot, who’s father ran the island powerhouse, nudged her mother and pointed to a stocky man with a pronounced double chin shuffling in the chain of exhausted prisoners. “There he is, mama! That’s Al Capone!”

U.S. Penitentiary Alcatraz was open and ready for business.