Halloween is San Francisco’s unofficial holiday. October 31st is now an occasion for adults to dress up, drink, dance, and revel living in a city of differences and tolerance. In years past the evening was for children, but adults would put on good parties as merchants and community groups hosted street fairs, parades, and festivals. 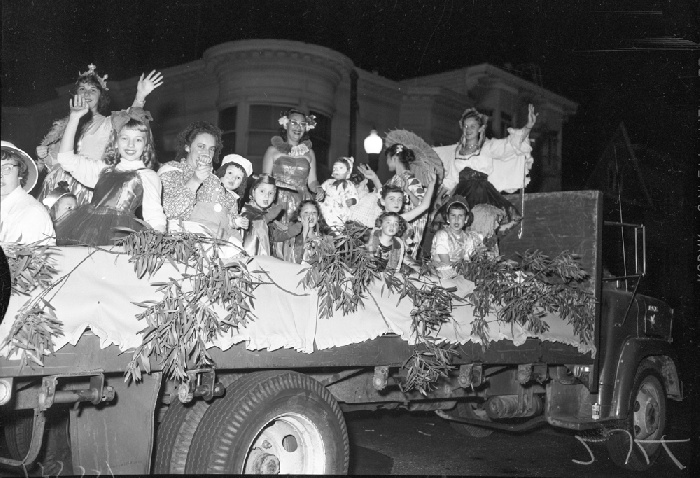 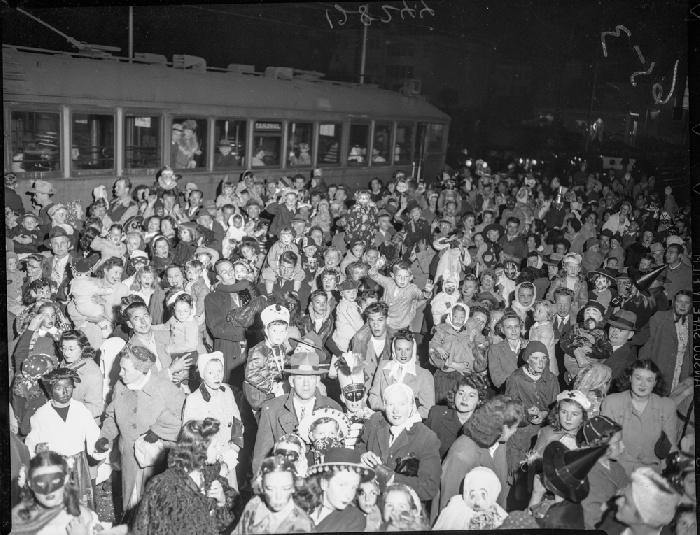 I loved being out on my familiar blocks at night, part of a pack of children mostly unsupervised. Halloween was strange and thrilling with its allusions to death and the macabre, its ancient traditions mixed with popular characters and stories of the day, its play-acting as cowboys, witches, and spacemen, and, of course, its candy. 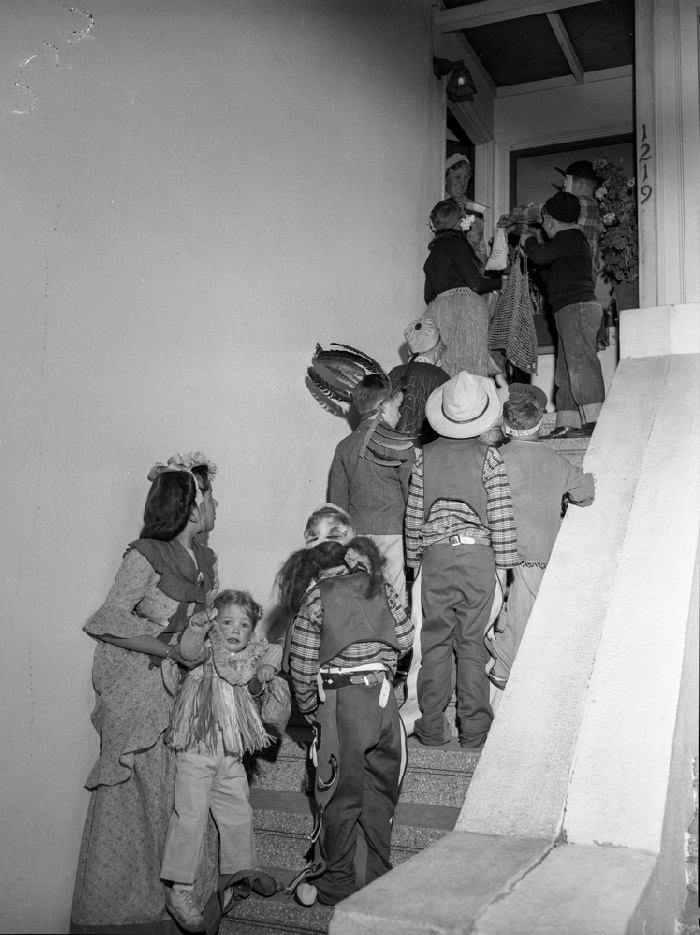 It was the same with my daughter. Months ahead of October, she would decide on a costume and worked on making it with my wife. Miranda tended to the traditional characters—skeleton, vampire, witch, ghost—and was a fearless and industrious trick-or-treater.

Despite the adult-driven nature of Halloween in San Francisco today, I can testify that there are still children in the city enjoying it. Things are different than my day, for sure. Halloween activities now mostly center on school and block parties in the late afternoon and early evening. Trick-or-treating action is concentrated in specific (and wealthy) neighborhoods. At my house in the middle of the Richmond District we get perhaps one group of costumed kids a year; my friends who live in Cole Valley go through pounds and pounds of candy, not bothering to close their front door as hoards of robots, princesses, and copyrighted superheroes make up hours-long processions with parents as escorts.

The ferrying of kids to West Portal and Sea Cliff, St. Francis Wood and Cole Valley doesn’t seem to be so much about parents’ fears as much as demographics. Trust me, we had more than enough city anxieties in the early 1970s, from the Zodiac killer to the Symbionese Liberation Army, plus the poisoned Halloween candy urban myth was going strong. But back then we could have 20-30 children on one city block, a critical mass to push households into stocking candy for the neighbor kids. With fewer children in the city, a self-respecting jedi master or Black Panther has to commute across town to get a decent sackful of candy bars.

On Wednesday, watch out for the kids while driving and try to recapture some of the excitement you had as a child. Your role model can be Peter Finelli, shown in 1946 dishing out free ice cream cones at his store on 42nd Avenue in the Sunset District. This man is having some fun: 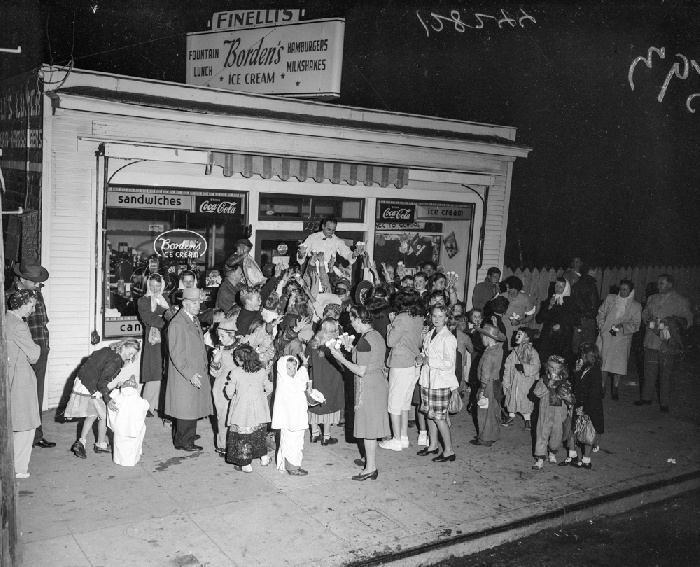 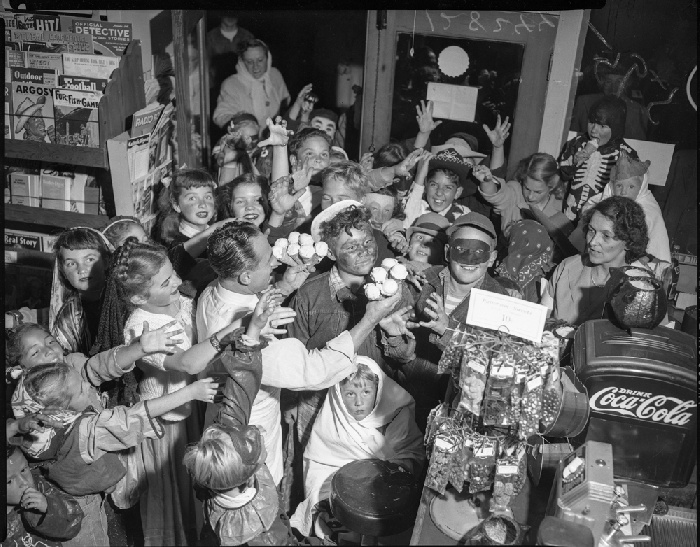 We thought we had come upon just another photograph of a work party after the April 18, 1906 earthquake. Here was a large group of men wielding tools in a rubble-strewn street. 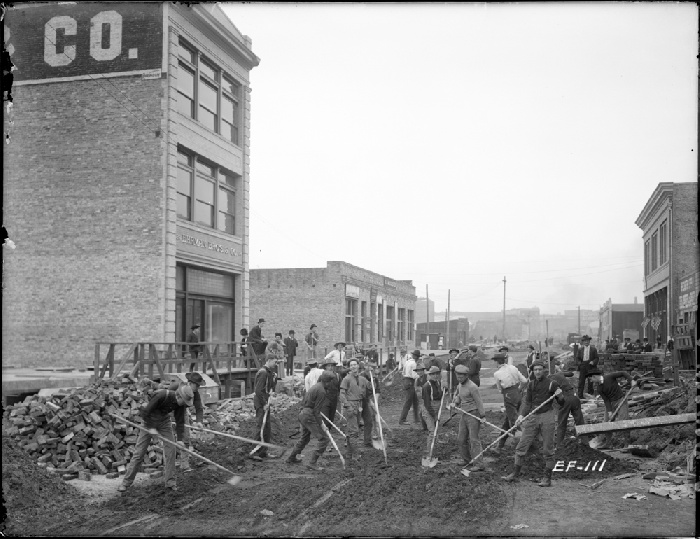 But something wasn’t right. These men looked a little too well dressed for workingmen: nice hats and ties, watch chains, clean shoes. The scene is Front Street near California Street, with the offices of Ehrman Bros & Co. in the background. Did the cigar-importing firm put its employees to work as general laborers? 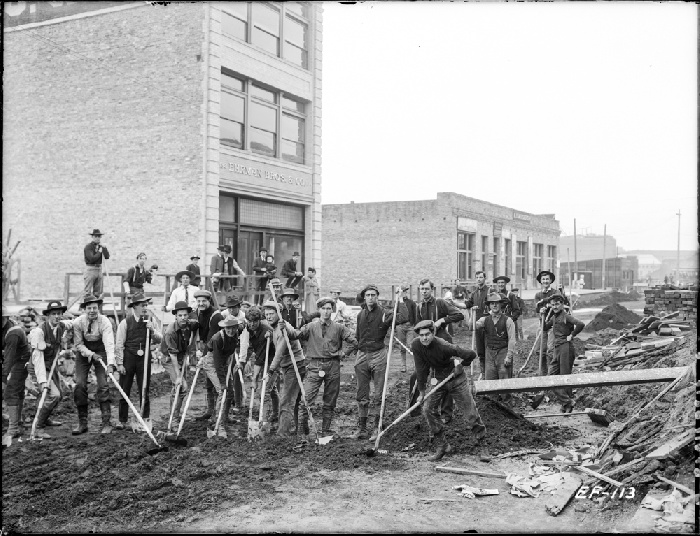 Our friend and researcher John Freeman tipped us off on the story here: “These photos are from March 3, 1907, ‘House Cleaning Day,’ a day set aside for volunteers to join together to shovel debris off the streets, and sweep them clean, with the intention to boost community spirit and show the world that progress was being made in reconstructing San Francisco after the 1906 catastrophe.”

A group of local teamster firms stolen the idea from Boston’s once-a-year “Spotless Town Day.” The proposal was for San Francisco’s own day of service in which “merchants and their employees, labor unions, teamsters, contractors, and everybody who can assist, will be asked to take up shovel and broom in behalf of clean streets and sidewalks.” But San Francisco had a bigger job ahead of it than Boston. Almost a year after the earthquake and fires of 1906, the clearing of rubble, paving of streets, and general reconstruction was far from complete.1

The whole event was planned in a couple of weeks. Large companies, city agencies, social clubs such as the Outdoor Art League, school children, and allied unions all promised their support and participation. Chinatown merchant Sing Fat pledged a dozen men. Women’s Associations organized luncheons and coffee stations. Teams, wagons, and tools were donated for the day’s work, and liquor dealers were asked to close for the day to aid in turnout.2

Circulars were sent to residences across the city reading: “It’s up to you. Why? Because: This is your city; these are your streets; this is your business—and if you don’t help to improve you own property, who will? Roll up your sleeves and help. Tidy up your front yard; sweep off your sidewalk; clean your street. Everybody is working—do your share.”3

If you’re thinking you would rather not volunteer your Sunday off to work, pastors across the city agreed. Rev. George E. Burlingame of the First Baptist Church called the idea “an injustice to the workingman, a transgression of divine law and a violation of the laws of the State of California.” The San Francisco Call rejoined that the event was voluntary: “Let every man feel that he is giving such help as he can give, as free as the air of heaven, with absolutely no strings on his desire to work a whole day, a half-day or a few hours.” Even so, on the day of the event, sermons were given against it and scornful men handed out cards to volunteers reading “Wanted, 10,000 suckers.” On the pro-volunteer side, souvenir badges were distributed showing that everyone works, “even father.”4

The New York Times recently published a piece on the dirtiest block of San Francisco (Thank you for that, NYT. There doesn’t happen to be a soiled corner in New York City to write about?) Meanwhile, our new mayor is demonstrating her focus on clean streets by carrying a broom to public events. Should House Cleaning Day make a comeback? Could the city come together without the help of an earthquake? 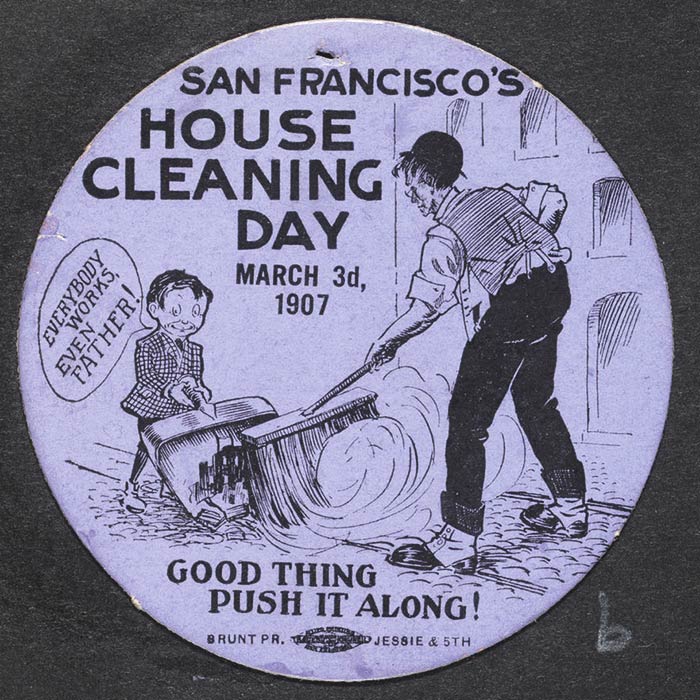 We have always loved this image of the Ocean View District, the neighborhood along the San Francisco/Daly City border between Lake Merced and the Outer Mission. The photo has been copied over and over, handed through various collections, including the great San Francisco History Center at the San Francisco Library, and used in displays, calendars, and murals. With the date unknown to many (including us for a long time), 1910 or 1915 was often attached to it, but this image and two others in the set were, in fact, taken one hundred years ago this past week, on October 4, 1918. 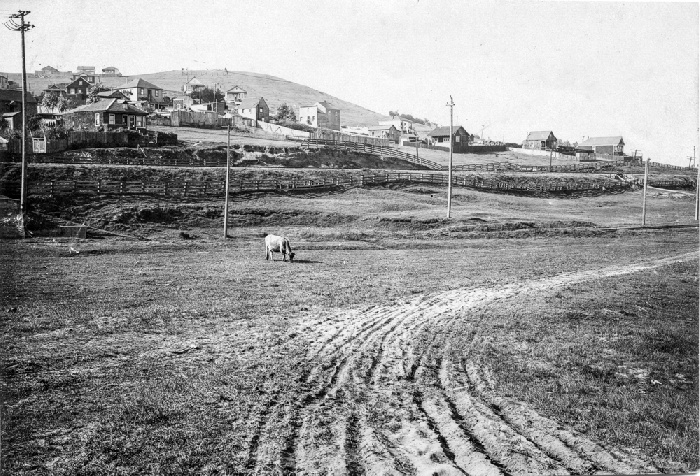 Decidedly rural—there’s a cow center stage—this callback to the area’s agricultural past is also ironically attractive because the bucolic spot is today a confluence of off ramps, boulevards, elevated BART tracks, and Interstate Highway 280. 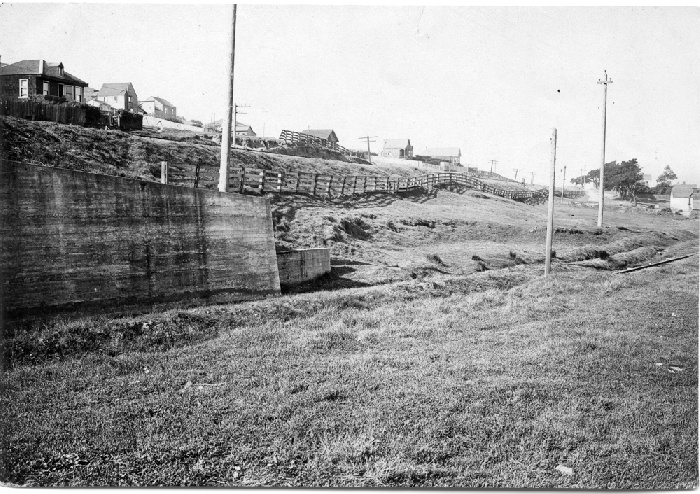 View westerly near the crossing of the Southern Pacific and Ocean Shore railroad tracks, October 4, 1918. (wnp27.0500.jpg; courtesy of a private collector.)

Some of the cottages are still extant on the hillside in 2018, even if this section of Palmetto Avenue, seen left of the railroad tracks in the photo below, was mostly eradicated by the freeway and BART. 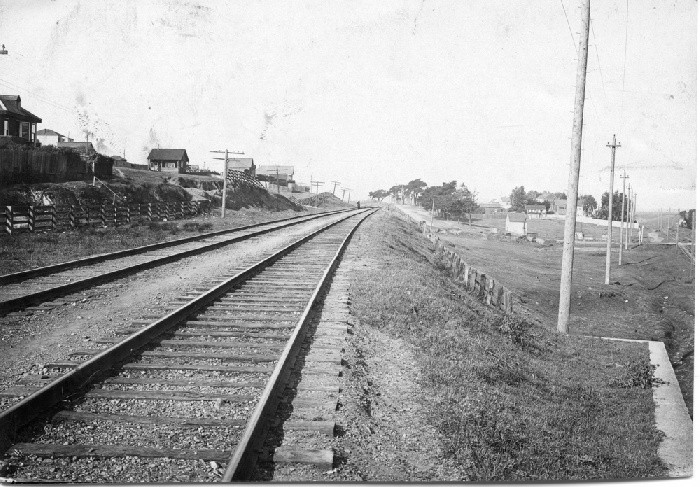 The tracks belonged to the Southern Pacific Railroad (SP) and dated back to the creation of the first San Francisco-San Jose Railroad of the 1850s. In 1906, a rival company, the Ocean Shore Railroad, laid a single track that crossed under the SP tracks just east of Crystal Street. While the Southern Pacific ran along a berm the Ocean Shore tracks lay in a ditch dug below the grade.

All the steam train traffic, plus various streetcar lines and farm wagons delivering produce from surrounding fields to downtown, made the Ocean View a fairly busy crossroads. Because of frequent accidents at the five-points intersection of Plymouth Avenue, Sagamore Street, San Jose Avenue, Sickles Avenue, and the SP line, locals nicknamed it “Death’s Crossing.”

The photo below shows a view just northeast of Death’s Crossing, roughly at Sickles Street and Cayuga Avenue. Ocean Shore Railroad employees are digging the cut to pass under San Jose Avenue and the United Railroads streetcar line. The same hillside on the Daly City border seen in previous photos is visible in the distance. The Ocean Shore Railroad’s plan was to connect San Francisco with Santa Cruz via the scenic cliffs along the Pacific Ocean, and advertised with the slogan “Reaches the Beaches.” 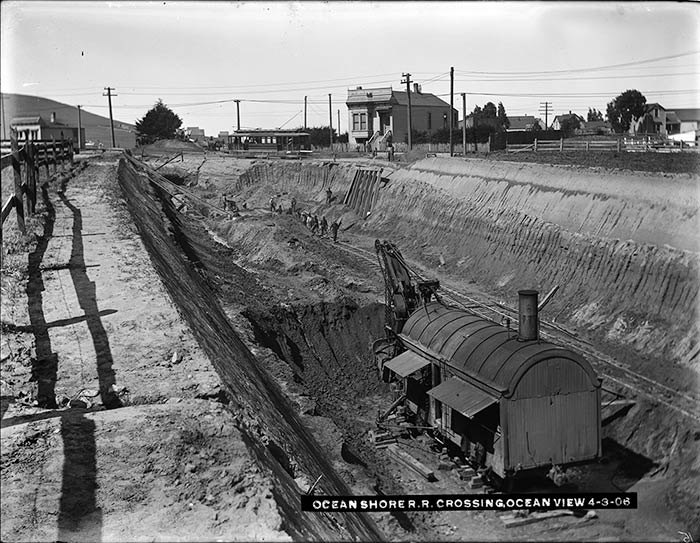 Just two weeks after this digging photo, on April 18, 1906, the San Francisco earthquake struck and dumped a good deal of the Ocean Shore’s cliff side route into the ocean. The enterprise barely got off the ground in the aftermath and sputtered to its end in 1920.

The SP tracks lasted until the late 1940s, winding through Noe Valley and the Mission District, where evidence of the line can still be seen in odd triangular shaped buildings and diagonal right-of-ways cutting through city blocks. More on that in a future “Closer Look.”