OpenSFHistory has many, many promotional automobile negatives that we believe originated with Christopher Helin, photographer and automotive editor for the San Francisco Examiner from 1915 to 1935. The images ended up in the hands of collector Wyland Stanley and, from him, have been disseminated to be found in libraries, eBay auctions, private collections, and at OpenSFHistory. The one below definitely requires a closer look. 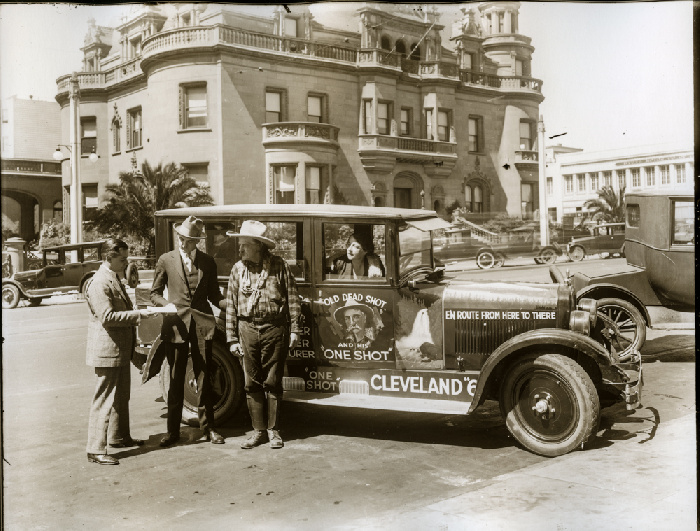 Taken 94 years ago this month, the image shows a stereotypical western character with a couple of dudes in suits. A stylishly-dressed woman listens from inside an automobile with illustrations and sign lettering on its side. Behind the group, on the corner of Clay Street and Van Ness Avenue, is the Claus Spreckels mansion, restored after being gutted in the 1906 earthquake and fire, only to later fall to “progress.”

Colonel King Stanley, who already had a pretty good name, was also known as “Old Dead Shot.” It was an honorific nickname given to him, he claimed, by “Indians of the frontier,” and sometimes his story specifically mentions he received it after shooting his way out of the Battle of Wounded Knee.1

Stanley had become a traveling entertainer, crisscrossing the country in different automobiles, always with his likeness and colorful descriptive text painted on the side:

The Macon Telegraph described Stanley’s typical attire: “…heavy boots that lace to the knee, a red and black hunting jacket and other typical Western apparel, and all that topped by a huge sombrero.” A rattlesnake skin cravat also had a prominent place in the colonel’s wardrobe.2

In 1924, the Chandler-Cleveland Motor Car Company decided to hire Stanley to promote its new model, which featured a “One-Shot” lubrication system. The company gave him a 1925 Cleveland Six, and added their own message to his usual artwork: “Old Dead Shot and his ‘One Shot.’” What better way to advertise the reliability of an automobile than have a droopy-mustachioed, suspender-and-boot-wearing trick-shot western scout drive it around the country?

Stanley, 71 years old at the time, visited dealerships from South Carolina to San Diego. This wasn’t his former lonely life as a scout. He had his wife of two years with him, and a mechanic, “Nebraska Bill” Spohn, riding along to keep the Cleveland running like a top.3

In some ways, the little details we learn about Col. Stanley’s spouse are more interesting than his blowhard Indian-fighting tales. The former Grace Raymond was a lawyer and “newspaper woman,” often called Stanley’s “radio wife” because the couple married in a broadcasting station, supposedly the first marriage ever conducted on live radio. One suspects she might be the mastermind behind Stanley getting the “one-shot” gig.

The couple’s loop around the United States was touted as their million-mile honeymoon. At every stop the Stanleys were appropriately enraptured and complimentary of the town or city. After a nice remark on local climate or hospitality—Macon, Georgia was “the City of Chivalry,” and Phoenix, Arizona the “City of Smiles”—Stanley had a handy quote on how he was equally impressed with his automobile’s one-shot technology: “If I am not badly mistaken, the new lubrication system will materially lengthen the life and serviceability of the Cleveland motor car.”4

For a tale-telling cowboy scout, the colonel stayed on script for the motor company, no doubt with help from the newspaper automobile editors and the dealership representatives. Instead of tales of the Wild West, we mostly get “Col. Stanley claims his car is so easy riding that he has never even broken a tube in the five-tube radio set installed in his car.”5

Sometimes the newspapers weren’t sure what the story should be. Was Stanley famous? The car unique? Perhaps the honeymoon angle? The durability of the tires on a long-distance trip? Muddying the marketing even more, some dealerships came up with a gimmick to offer $100 credit on a new car to citizens who spotted Stanley, making it a human scavenger hunt story.

But the promotion was a success from a visibility angle. Stanley’s trip with the Cleveland Six appeared in newspapers across the country. During his San Francisco visit, after being spotted by John P. D. Chadwick in one of the scavenger hunt promotions, the old scout led a caravan of fourteen Cleveland cars through the streets of the city and received a key to the city.6