In the last few months the intersection of Masonic Avenue and Geary Boulevard has been a mess. The city closed a short cut-off on the southwest side to make a plaza of sorts, putting in new pavers, artwork in the form of semi-humorous wayfaring signs, and, in the continuing madness we San Franciscans are somehow unable to stop, palm trees. 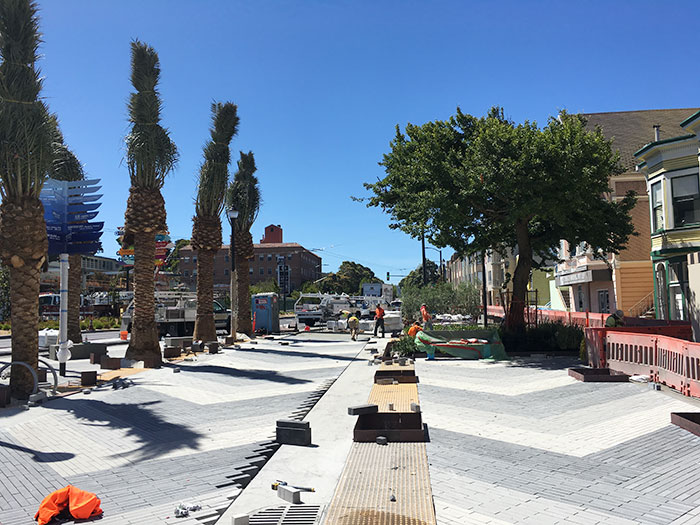 View south at street work at southwest corner of Masonic and Geary, July 10, 2018.

Across the street, the old Sears department store, now a mini-mall with a Target store as the primary tenant, is also a construction site with some of the many parking lots getting new construction. On the northwest corner, the old Copper Penny/Lucky Penny diner has been closed for a few years, blighted and sorry, awaiting its own future: a 95-unit residential tower. The northeast corner is an SFMTA parking lot dead zone, a prime place to dump old luggage or broken vacuum cleaners. Thousands of automobiles and busses squeeze and smoke through the crossroads each day. 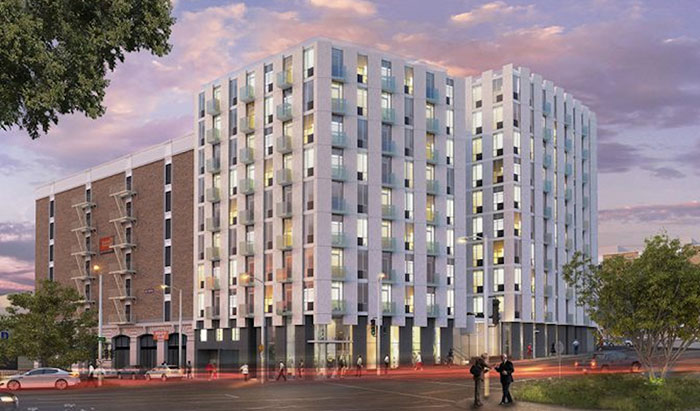 Latest proposition for the northwest corner of Geary and Masonic.

I have been keeping a watchful eye on the small cluster of cottages and early buildings where the plaza is being made. Dating from the days when three large cemeteries hemmed in this intersection, the buildings have survived previous “improvements” of Masonic Avenue and the construction of the Geary Tunnel in the 1950s. I don’t want them to be lost now. The most recognizable is probably the corner building, which for many years held The Pub restaurant and bar (now Mo’z Café) with a muraled speakeasy in the basement from the days of Prohibition. A bit farther west, past the auto body shop on Geary, are two 1880s Italianate residences that have adapted to the changing times, their old straight entry stairs removed for commercial enterprises. I have had my hair cut in one and bought coffee in the other, but it was only recently in finding a photograph in the OpenSFHistory collection that I discovered how far back one of these buildings housed a business. 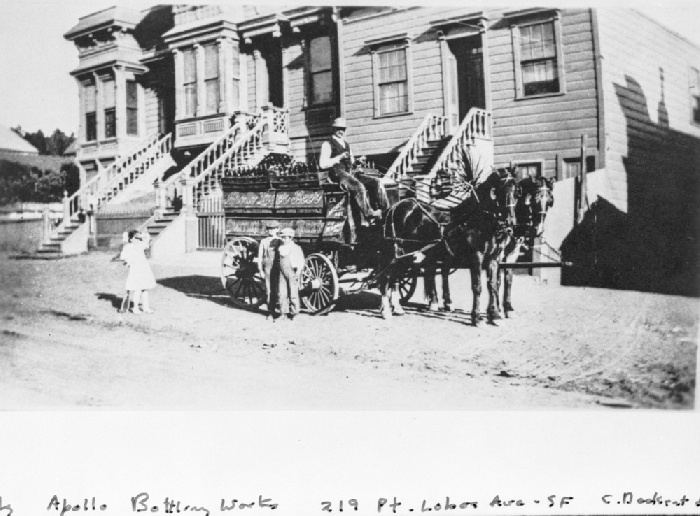 No doubt driving the decorative delivery wagon for Apollo Lager is Charles W. Dechent, Jr., who bottled beer inside the middle residence, then addressed 219 Point Lobos Avenue. Today it is broken into a café on the ground floor and a number of apartments, including a cottage in the large backyard, and addressed 2739-2741 Geary Boulevard.

Dechent began as a teamster. His father owned a nursery and floral shop just up the hill where the Muni office building and car house stands today between Presidio and Masonic. Customers bought arrangements for funerals services and visits to the graves of their loved ones at Calvary, Masonic, and Laurel Hill cemeteries. From his job as teamster, Charles Jr. began the bottling business inside his house with his wife Nettie, and children Charles Wallace, Chester (likely the two boys in front of the wagon) and daughter Clarice (perhaps the girl shading her eyes) somehow carrying on inside with the works.

From these fairly humble beginnings, the Dechent children grew up to be well educated (Charles and Clarice went to Stanford) and civic minded. The last Dechent in this photo passed away in 1995.

Today the former 219 Point Lobos, the complex of apartments and café, is for sale, the owner asking $2.275 million. The sales agent has the building listed as built in 1900, but that is no doubt a post-1906 earthquake and fire guess. The house was definitely standing as far back as 1889. Here’s hoping the new owner appreciates its history and at a changing corner of new towers and palms trees raises a toast of bottled beer to the past. 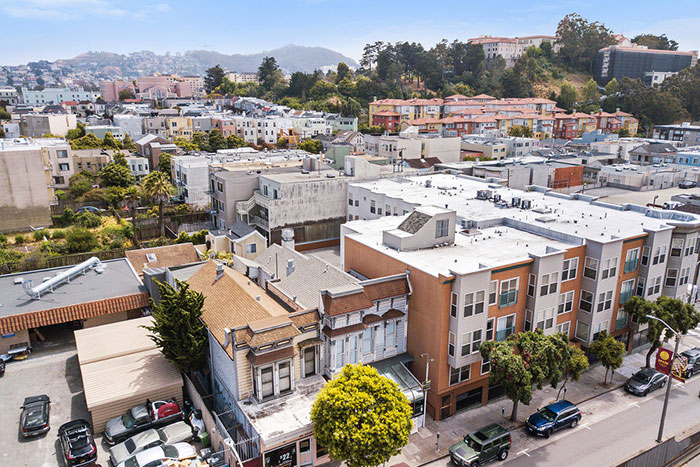 Aerial view from across the street at two surviving cottages from sales listing. Interested in the property? Visit the Allison Chapleau Paragon Commercial Brokerage page to read more.