On May 7, 1926, overloaded California street cable car #17 rolled downhill on the way to the Financial District. As it approached Stockton Street, gripman Isadore Navarro released hold of the cable and applied the brakes to the wet and greasy rails on the steep grade.

“The car simply would not stop. I yelled to the passengers: ‘Get back, get in back of the car!’”1 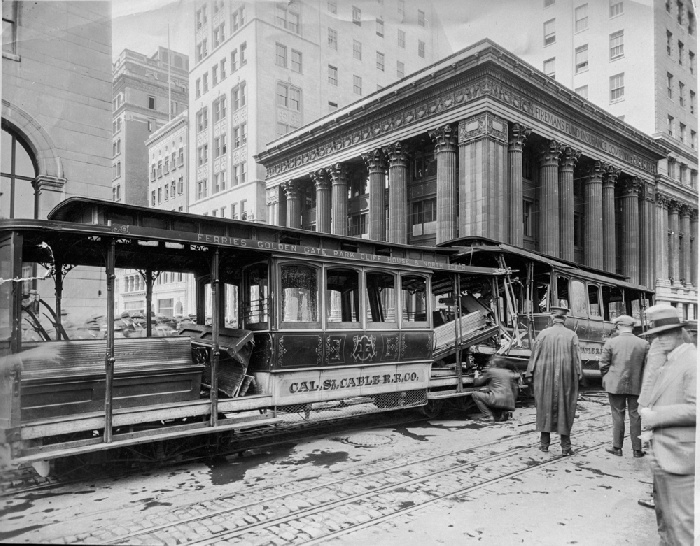 In processing and scanning the OpenSFHistory collection we come across many news images depicting visiting dignitaries, parades, and crime scenes. (Out of respect to the victims we do not post photos of the coroner at work, even a century after the incident.)

Traffic accidents are well represented in the collection since, in addition to reporters from four major daily newspapers, the first half of the twentieth century also had official city and company photographers to document smashed streetcars, flipped fire trucks, and overturned trains. Searching for “accident” brings up produce trucks in front yards and streetcars in front parlors. Hogs in a lorry and grinning teenagers wait for the mess to clear while a photographer captures the scene.

As gripman Navarro and conductor Clinton Toy tried to slow #17 on its slide down the California Street hill, a score of passengers leapt to the street just before the car hit a meat truck at Kearny Street. The truck was catapulted into a parked car and into the front of a tailor shop, strewing animal carcasses behind it. The blood and meat on the streets would lead to exaggerated early reports of human carnage from the accident. Onward down the hill the cable car raced, with Navarro ringing his bell madly and Toy yelling at passengers to lie flat and not to jump off.2

On the rails ahead of the speeding #17, was a second cable car headed to the Ferry Building. Conductor Matt O’Connor saw what was happening behind him. He hustled passengers off the back of the car and ran up to his gripman, John Tompkins, imploring him to get moving. A moment after, at Sansome and California Streets, the runaway telescoped into O’Connor’s car: “There was a shattering of glass and rending of steel and wood. Seats were twisted free from their fastenings.”3 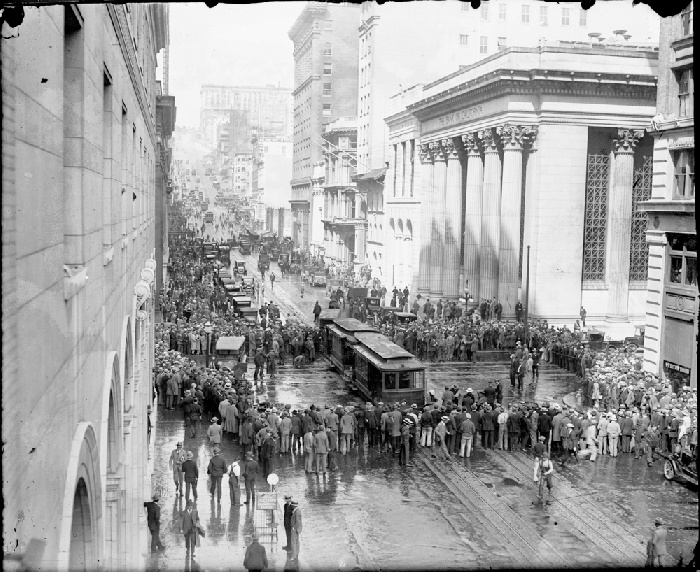 More than a hundred were injured, some seriously. City agencies and corporations would use post-collision photographs for investigations and as evidence in legal claims for damages. Many of the most revealing street scenes of early twentieth century San Francisco come from “A.R.” or “Accident Report” photographs taken by the United Railroads. While we historians examine business signs, once-bare hillsides, and architectural changes, our excitement is tempered because someone was likely injured or even killed just before the photograph was taken.

In the days following the cable car crash the newspapers had humorous articles about personal items collected at the accident to be claimed by those in the hospital—one woman’s found shoe was conjectured to be a Cinderella story only awaiting a Prince Charming. Dodge Brothers had the gall to run a promotion on how little damage the flying meat truck had done to the parked automobile.4

Gripman Isadore Navarro, injured in the crash, was hailed as a cool-headed hero in the immediate aftermath. A day after, however, Joseph W. Harris, president of the California Street Cable Railroad Company, asserted that Navarro was to blame for not using another brake and possibly having the cable still engaged. “It goes without saying that if he is found to have been responsible he will be discharged.” Harris also said the company was willing to pay for victims hospital bills “unless demands were exorbitant.”5 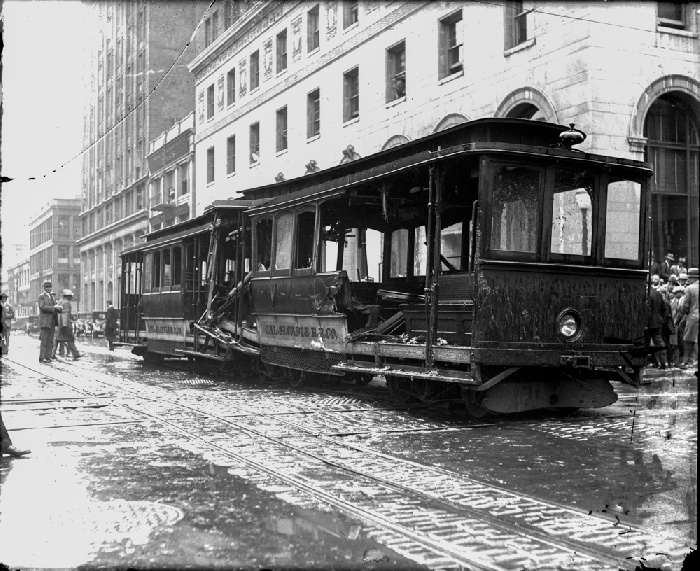 Aftermath of the cable car crash of May 7, 1926. (wnp30.0118.jpg, Emiliano Echeverria/Randolph Brandt Collection.)