Lands End is a familiar name to San Francisco residents, who associate the name with the rock-strewn northwest corner of the San Francisco peninsula, an area stretching roughly from Sea Cliff to the ruins of Sutro Baths.

But few people realize that there is a geographic feature along this desolate shoreline actually called Lands End, and that over the decades it has been home to a series of Lands End hermits.

The physical feature named Lands End is a finger-like rocky promontory extending into the Golden Gate just below the Veterans Administration hospital. (The point is best known today as the site of a well-loved labyrinth built of beach rocks.) 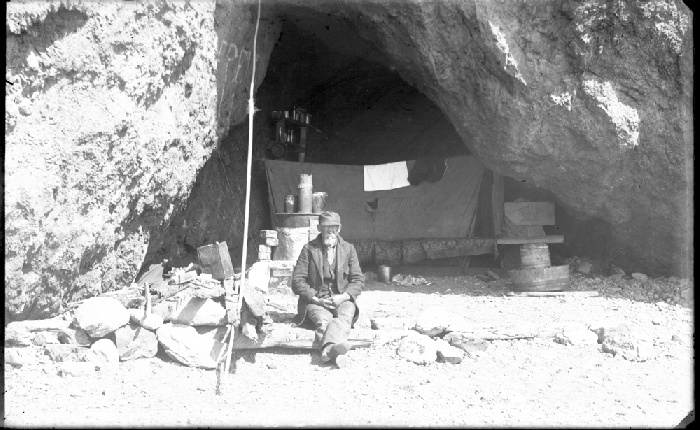 Nestled into the windblown western face of the promontory is a small cove and pocket beach known to locals as Lands End Beach or Mile Rock Beach, due to its proximity to both landmarks. A deep cleft in the cliff face, now mostly obscured by sand and rocks, once formed a sheltered—if damp—refuge from the elements.

Sometime in the late 1870s, despite its remoteness, a homeless man named Edward Lynn took up housekeeping in the rock cleft at Lands End Beach. He constructed a perilous trail to the cove, which he modestly named “Lynn’s Beach.” Beginning in 1888, he experienced an upsurge in visitors when the famed Ferries & Cliff House Railroad began running along the precipitous cliffs flanking Lands End. Not long after the line’s opening, a shed-like waiting room was erected alongside the railroad tracks for hikers headed to and from Lynn’s little beach.

The San Francisco Call ran an article about Lynn in the September 13, 1896 edition titled “Has Turned His Face Toward The Sad, Sad Sea,” complete with illustrations of how he had converted the shallow cave into a residence.

“Lynn has built a bulkhead across the front which is sufficiently high to keep out the high spring tides and there is a step of rock and plank to reach the top of this, built of stray planks that have floated in. Just inside the line of this breakwater there is a rude stove, with a tall pipe, and on this Lynn cooks his meals. He was preparing a stew of beef and onions. Behind this there is a long bench on which are a washtub, tin pans and odd and ends, and immediately back of this is stretched across the mouth of the cave a black striped blanket, which shuts out from view the interior.”

Lynn had once been a trained machinist working for Fulton Iron Works, but had invested wildly and badly. He had lost his savings and his house, and then his wife died. In those pre-social-services days, Lynn was left without any financial reserves or source of support. He told the Call reporter, “twelve years ago, when this was all a wilderness, I came out in this section, having bid farewell to society, and for a time lived in a little cabin that belonged to Mr. Sutro and for which I paid him $1 a month rent. It was not much, still it was rent. Then I came down here [to the beach] and settled, and pay no rent.” 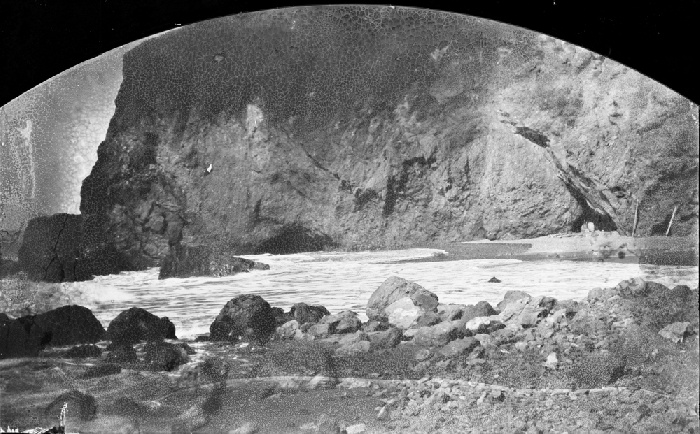 The Call journalist concluded with Lynn’s description of how he survived in the near-wilderness of Lands End:

“‘How do I live? Well, I gather mussels and sell them, and once in a while I get a job on the [rail]road. Then there are a great many people who come down here and have lunch, and as many bring more than they can eat they hand me what is left over, and in that way I manage to get along. I do not seek the society of those who come here, nor the society of any one else, but if people address me I answer them with all the civility at my command, but no more society for me—I have soured on society.’”

No one recorded how long Lynn stayed in his cleft overlooking the beach, but a San Francisco Chronicle article about Lands End on December 4, 1898, relates that he’d departed mysteriously: “There is a deep cave with an arched entrance…here, many years ago, a hermit took up his residence, constructing a rude fireplace of stone beside it and closing the entrance with a bright-hued blanket…One day he disappeared, and there are none who seem to have ever solved the riddle of his fate.”

Lynn’s vacant cave didn’t stay abandoned for long, though, and by 1903 it had another occupant: Ny Pum Chun, or “Old Tom” as visitors to Lands End beach called him. The Chronicle featured him in a story on October 11, 1903, titled “The Chinese Hermit of Land’s End”:

“Here in this weird place a Chinese has taken up his abode and has lived for many months. Except on Sundays or holidays he lives the life of a recluse. His only company are the sea birds, or the passing ships or steamers as they plow through the water a quarter of a mile away on their way in or out of the Golden Gate.

“Even on the calmest days the wind whistles and rustles past the bluff which crowns his home. Often during a storm or in the night the elements howl at his open doorway, and with but the slightest surge the waves could roll through and engulf him. Yet he lives in this place contentedly and apparently in no fear…

“And so he will continue to dream until the waves of the Pacific or the Sutro estate drive him out of his novel home.”

Two years later, Old Tom was gone when the cave became the scene of a mysterious event. An unconscious Englishman, a gent named Herbert Smith, was found lying in its depths with a horrific gunshot wound to his head. According to the San Francisco Chronicle of February 12, 1905, Smith’s version of the events was that two “footpads” had mugged him along the train line, taken his cash, shot him in the head, and carried him into the cave. Police suspected a much simpler explanation: a bungled suicide attempt.

The story relates that a revolver had also been discovered in the cave when Smith was rescued, concealed by a plank set deeper in the cleft. Curiously, none of the gun’s cartridges had been fired. How Smith could have shot himself with a loaded but unfired revolver was never explained.

The Chronicle story concluded with an update on the hospitalized victim’s condition: “Smith is conscious most of the time but complains of terrible pain in the head.” (Well, yeah.)

No additional occupants of the Lands End cave have been documented, but that doesn’t mean that other hermits and homeless haven’t occupied the desolate areas of Lands End. As recently as 2006, the skeleton of a man was discovered in a makeshift tree house not far from Ed Lynn’s and Ny Pum Chun’s former cave.

The website SF Gate reported on April 28, 2006, that a body had been discovered by a hiker 150 feet down a hillside “on a makeshift home woven into the lower branches of a cypress tree.” The coroners’ staff had a perilous time recovering the remains, using ropes to reach the 3½-by-7-foot platform made “of branches intricately woven into the tree.” Nearby were blankets, two backpacks with clothing, and an identification card, which belonged to a man named Frank Pangelinan Cruz, age 63. Officials estimated he’d been dead over a year.

The story concluded on somewhat upbeat note about Pangelinan, the last Hermit of Lands End:

“Investigators said it appeared the man had made a life for himself overlooking the water and may have been living there for some time before he died.

“‘It’s a beautiful view from there,’” said one of the investigators who found the body.”

Since the time of Old Tom’s departure and Herbert Smith’s suicide attempt, the promontory of Lands End has changed dramatically. It’s been repeatedly blasted and excavated for trails and military construction, and the Golden Gate tides constantly rearrange the rocks and shoreline of Lands End Beach. As a result, the hermits’ cave in the rocky cliff face is no longer visible, but the “tall, precipitous cliffs” and “jutting rocks against which the roiling billows break” described by nineteenth century reporters still survive.

And as the anonymous investigator observed, it’s indeed a beautiful view from there.

Retired National Park Service ranger John Martini is a volunteer helping us process the OpenSFHistory collection. His excellent book on Sutro Baths is available on outsidelands.org 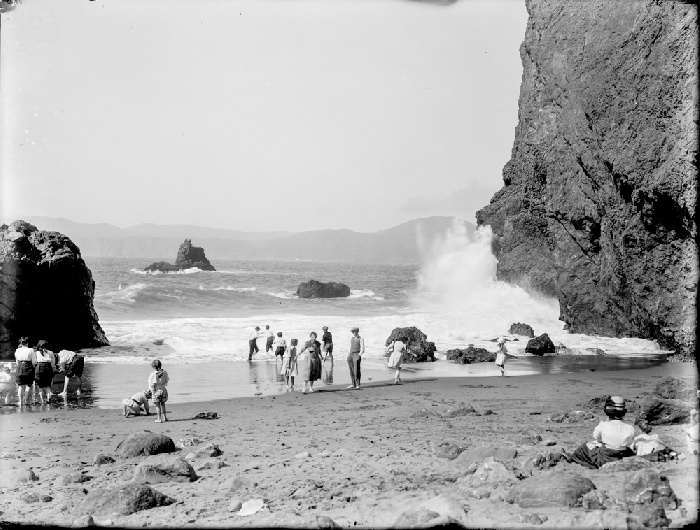