As naively disrespectful boys in the 1970s, we would ride our bikes into the Temple Emanu-El courtyard; do a quick loop around its fountain; and coast back downhill on Lake Street to our 11th Avenue block. The red clay tile dome rising from the northwest corner of Arguello Boulevard and Lake Street was a landmark of the Richmond District for us, an orientation point to lead us back home when wandering the hilltops of Fort Miley, Buena Vista Park, or Golden Gate Heights. 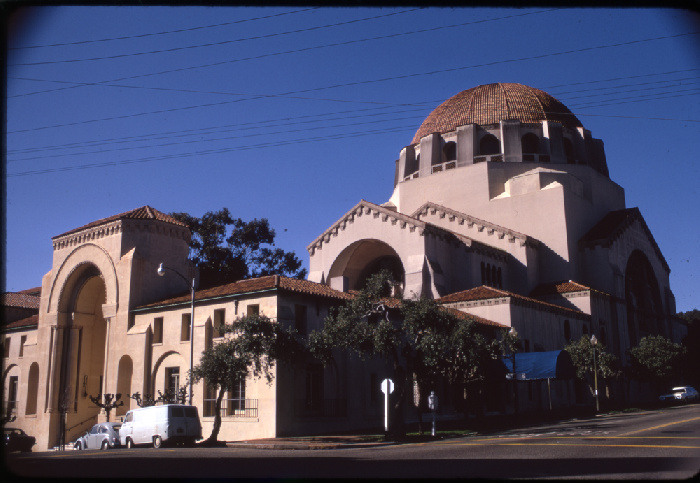 The predecessor Temple Emanu-El on Sutter Street between Powell and Stockton was just as much an icon, culturally and visually. At the time of its dedication in 1866, the temple was home to the largest Reform Jewish congregation on the west coast, and for decades its distinctive onion-domed twin towers shone on the slope of Nob Hill, gleaming in bronze-plate above the smaller buildings that separated the temple from Union Square. 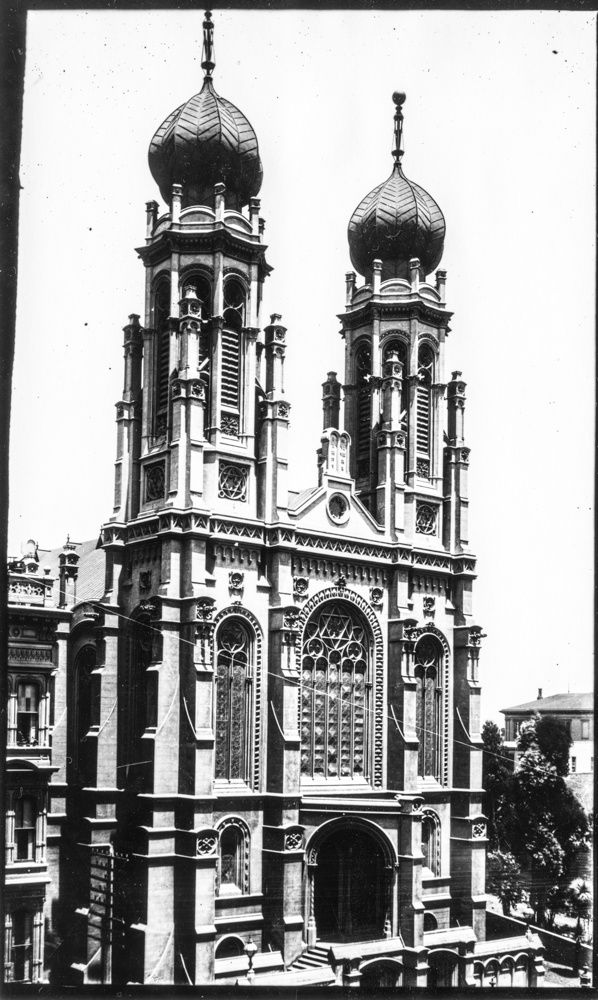 Designer William Patton was an expert in Gothic Revival and he brought hallmarks of the style to Emanu-El with details celebrating Jewish life. Illuminated six-pointed Stars of David glimmered in stained glass windows and the Tablets of the Law was set above the main entrance. The onion domes that topped the eight-sided towers were plated in bronze with golden globe finials. Fred Rosenbaum, in his book, “Visions of Reform, Congregation Emanu-El and the Jews of San Francisco 1849-1999,” wrote how the synagogue’s towers acted as beacons of the entire Bay Area:

“One hundred sixty-feet high, these gold-tipped spires were an integral part of the early San Francisco skyline: they were a prominent landmark for ships entering the Golden Gate; they could be seen by hikers across the bay in the Berkeley hills.”

The towers were iconic landmarks even after the April 18, 1906 earthquake. While the massive fires that followed the quake gutted Temple Emanu-El, the frame and towers remained standing. As we sort through hundreds of post-earthquake images in the OpenSFHistory collection, Temple Emanu-El’s ghostly skeleton acts as a wayfinder for us, a place-marker, along with the Call Building and the “birdcage” Whittell building, to identify locations in a landscape of blackened rubble. 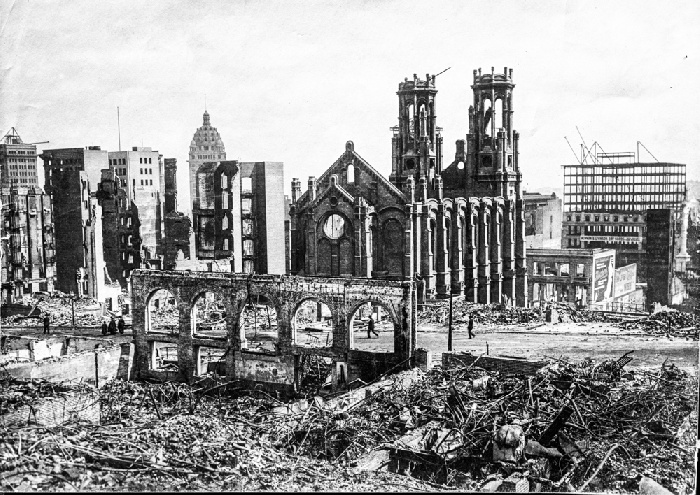 Ruins of Temple Emanu-El after the 1906 earthquake. (wnp14.4603.jpg, negative courtesy of a private collector.)

After the earthquake, the Jewish community rallied to restore the temple. Cone-topped blocks on the towers replaced the elegant onion domes, and the walls and the stained glass were restored. On September 1, 1907, the doors to the sanctuary reopened, and the space served as temple for another 15 years.

After the Richmond District was chosen for a new temple in the 1920s, the growing Emanu-El congregation sold the Sutter Street property. (The medical office building, 450 Sutter Street, occupies the lot today, and the golden gleam of the temple’s old onion domes is more than matched by architect Timothy Pflueger’s Neo-Mayan entryway and lobby.)

Ground was broken for the new Temple Emanu-El in August 1924. The cornerstone at Arguello and Lake was laid with the same trowel that had been used for the Sutter Street synagogue sixty years earlier.