It is not surprising that a collection of historical San Francisco images would have many, many views of the 1906 earthquake. Outside of the Gold Rush, which turned the small Mexican pueblo of Yerba Buena into the boomtown of San Francisco, no single event has had a bigger effect on the city’s landscape, legacy, and lore than the earthquake of April 18, 1906 with the fires that followed.

But I hope you forgive me when I say, after viewing hundreds and hundreds of images of the city destroyed in 1906, I feel a perverse interest in coming across photographs of a different San Francisco earthquake. 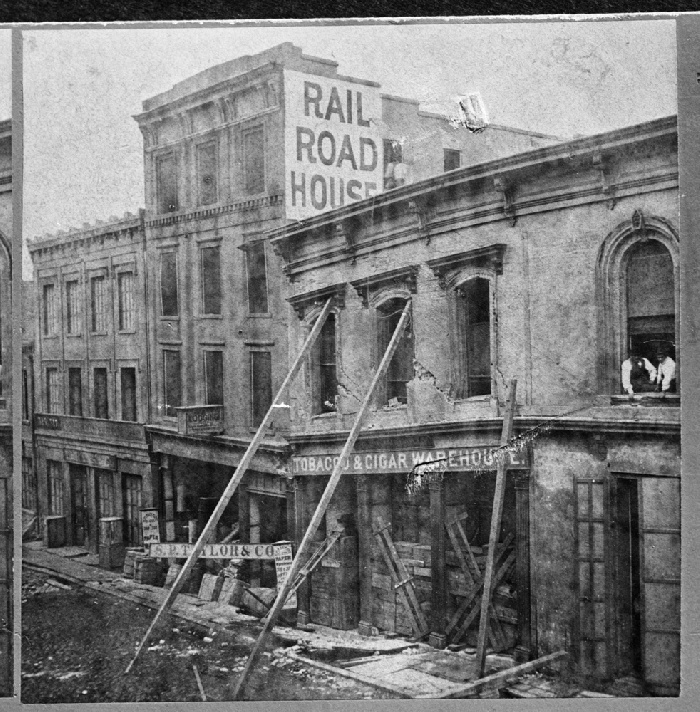 Damage on Commercial Street from the October 21, 1868 earthquake. (wnp37.00713, stereograph by Carleton Watkins, courtesy of a private collector.)

To an old-timer walking on Market Street on April 17, 1906, the “Big One” was two generations past. On October 21, 1868, 149 years ago this month, an estimated 6.8 magnitude earthquake hit a little before 8:00 a.m. (Although it would be known until 1906 as “the great San Francisco earthquake,” the event flattened the city of Hayward and did far more damage in other Bay Area locales.)

Earthquakes were noted before the arrival of the Americans—a major one in 1836, another damaging Mission Dolores and Presidio buildings in 1838. Significant earthquakes also struck in 1857 and 1865. But the city continued to put up masonry buildings (good against the frequent fires, bad in seismic events) and filled in creeks, marshes, and parts of the bay to expand into shaky “made ground.” 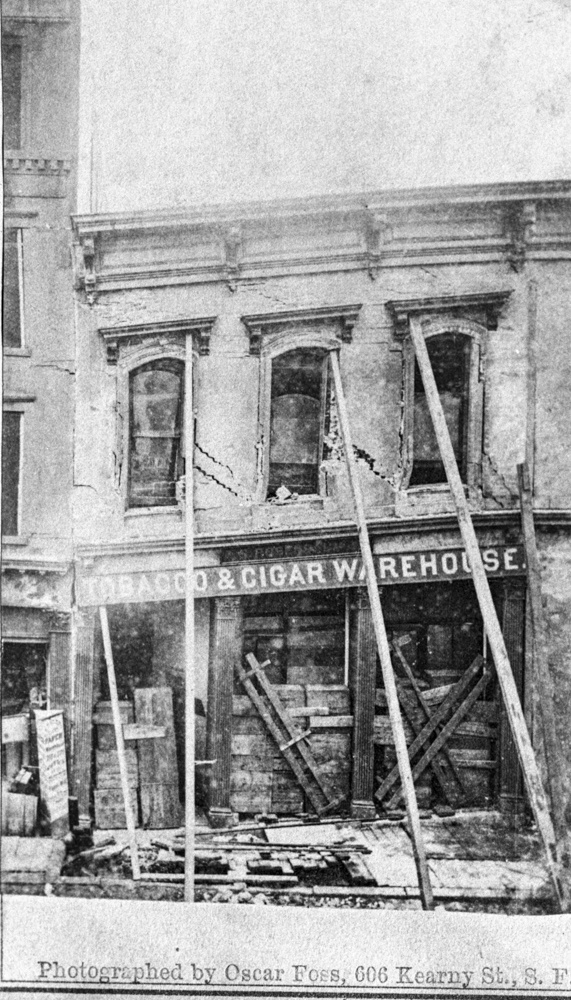 Malcolm E. Barker’s book, “More San Francisco Memoirs, 1852-1899, The Ripening Years,” has two excellent accounts of the quake. Louis Laurent Simonin was taking a bath in a hotel when it hit. He ran out of his room half-dressed, and he wasn’t alone: “[T]he hotel guests, panic-stricken, terrified, screaming and gesticulating wildly, were crawling down the stairs on all fours: the women in their nightclothes, with hair unkempt, the men in their bathrobes and, for the most part, barefoot…”

The Rail Road House, the S. P. Taylor & Co. paper company, and a tobacco warehouse on Commercial Street were some of the most dramatically affected. Edward Bosqui ran down to his office in the vicinity: “Two dead bodies were discovered under the debris of the coping and fire-walls which had fallen on them on Clay Street, nearly opposite our office; and farther down the street, between Sansome and Battery, another body was found under similar circumstances.” 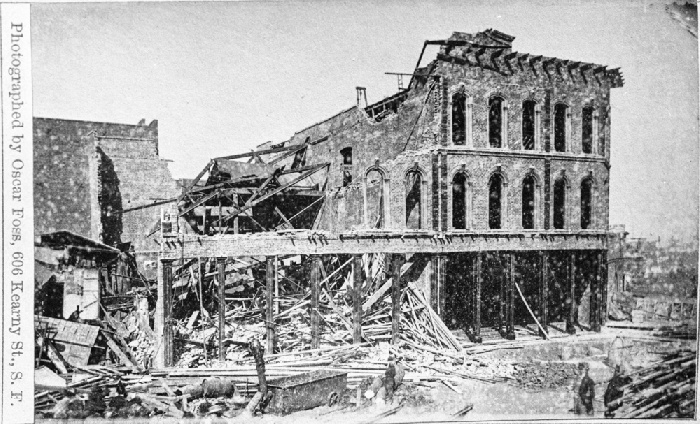 Damage at Market Street and First after the October 21, 1868 earthquake. (wnp37.00891, stereograph by Oscar Foss, courtesy of a private collector.)

Of course, one doesn’t have to go back so far to remember a notable October earthquake. Like Monsieur Simonin, my roommate Marty was in the bath when the Loma Prieta “World Series” earthquake struck on October 17, 1989. He too ran out wild-eyed, wearing only a towel.

The 1868 earthquake struck on the Hayward Fault. Seismologists and other researchers say a major event on that same fault, now with millions living and working along it, is overdue.

The major San Francisco earthquake anniversaries in April and October, separated by six months, serve well as reminders to refresh and replenish your personal earthquake kit. Go to http://www.sf72.org to get a supplies checklist. Change the batteries, switch out the gallons of emergency water, get prepared.

Really… are you ready? The next Big One could happen the minute after you finish reading this.