The photograph below was taken a year or two before the April 18, 1906 earthquake and the subsequent firestorm, but the scene should feeling familiar to San Franciscans of today. From Market and Powell Streets, off in the distance, the baroque-domed Call Building survives in sadly modernized form as the Central Tower on the southwest corner of 3rd Street. On the south side of Market the classical façade of the Emporium department store is now the entry of the Westfield San Francisco Centre mall. On the left edge of the view is the Flood Building, where tourists buy chinos from the Gap before lining up to ride the Powell Street cable car. 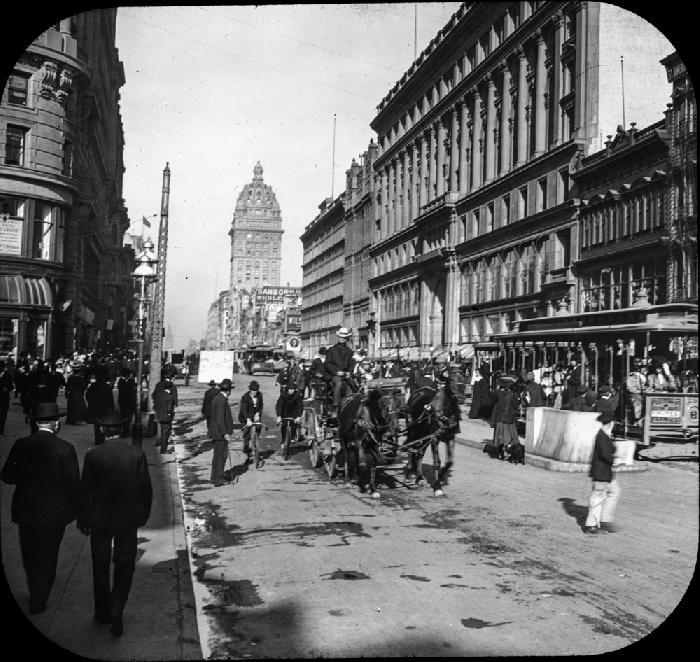 While the bowler hats, the horses pulling a carriage, and the cable cars running on Market Street are out of rhythm with the twenty-first century, the flow of people and transit is recognizable, especially the two bicyclists navigating the space between curbside and traffic.

The rise, fall, and re-ascension of bicycle use in American city life would plot out as a silhouette of Twin Peaks. In the 1880s and 1890s, improvements in bicycle technology led to a boom in popularity. Bicycle shops blossomed all over town. The smooth pathways of Golden Gate Park became packed with weekend riders. Bicycling became an obsession for young men, from casual rides about town, to fifty-mile weekend treks to San Jose, to marathon races in new velodromes (check out the facility that stood beside the panhandle). Women also took to riding, which caused an unending series of concerned editorials and pubic outcries on the propriety of women wearing bloomers and facing the indecorous possibility of perspiring. “Wheel clubs” organized to lobby for good roads. (An 1896 night rally ride for better paving resulted in a scrum near Powell and Market when outside hoodlums began rioting—some things never change.)

Across the nation, bicycles were used for pleasure, for deliveries by businesses, for exercise and sport.

Then came the automobile. Bike shops transitioned to car repair shops and wheelmen became motorcyclists and tinkering automobilists. As the twentieth century progressed in America, bicycling was shunted to children’s play, an occasional vacation activity, and the niche athletic endeavor. 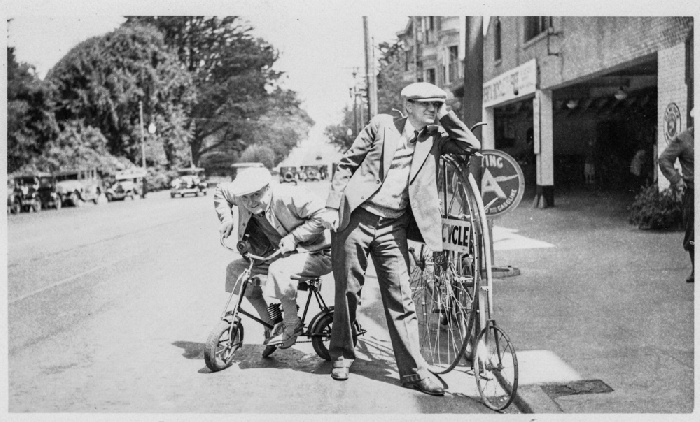 Men horse around with old bikes on Stanyan Street near Page Street about 1920. (Courtesy of a private collector).

Over the last few decades the bicycle has roared back in the United States, at least in forward thinking cities with good weather like San Francisco. Bicycling as an adult leisure activity—even as a way to commute to work!—was rediscovered in the late 1960s and early 1970s, in colleges and in the counter-culture, in hippie periodicals like the Whole Earth Catalog and in best-selling paperback manuals.

Soon everyone had a ten-speed, or mountain bike for Mount Tamalpais trails. I had friends earning a precarious existence as downtown bike messengers. Critical Mass rides started in the early 1990s, the San Francisco Bike Coalition suddenly had real political power, and it became normal for desk workers to lug their rides through office hallways.

Now, the SFMTA digital bike counter at 10th and Market Streets tallies an average of almost 2,000 riders each weekday. Where two riders passed a photographer in 1904, now a river of hundreds, even thousands, of helmeted 9-to-5ers pedal past each morning and evening.

Read some west side bicycle history, including the story of the “Lady Falcons.” 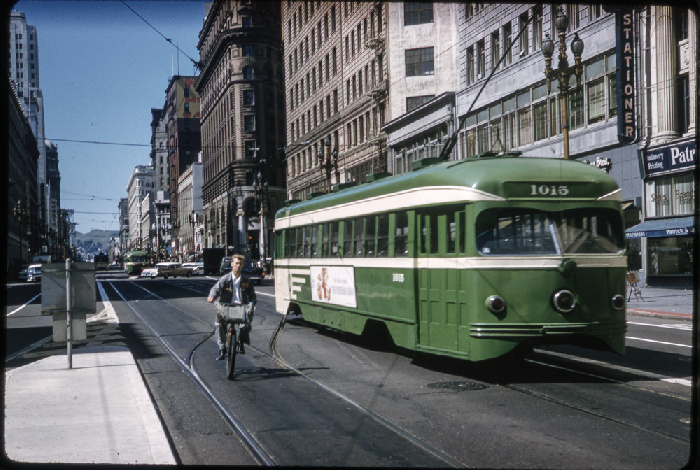 Market Street near Montgomery, April 1961. Not the first Critical Mass… (Courtesy of a private collector).