Few things can transport one to a San Francisco neighborhood in the first half of the twentieth century than the view of an old streetcar in operation or the blade sign of a neighborhood movie theater. When both are in one image, it’s as if we have cracked the secret to time travel. The recently uploaded batch of scanned photographs to OpenSFHistory features a few terrific compositions of streetcar and theater, such as this great snapshot below, taken by a streetcar fan in 1948. 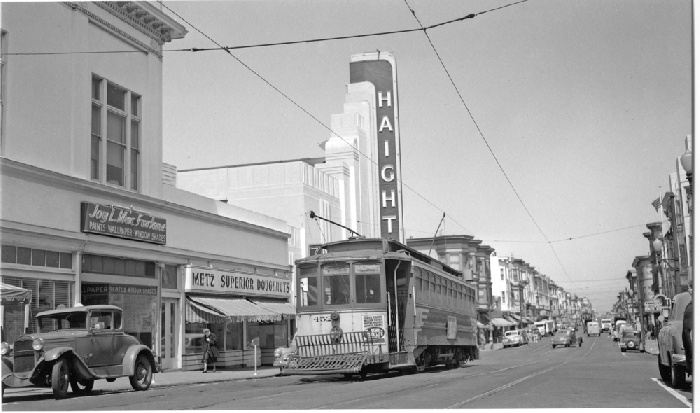 Urban planners talk of placemaking: the act of designing public spaces that promote social street life and where people have a sense of neighborhood—in short, making cities for people over cars and shopping malls. This often feels forced in new developments, with barren plazas, arty obelisks, or large rocks plopped on street corners. Designers provide this window-dressing, but people still need to “make the place” by seeing friends at local businesses, running into each other on public transit, or going a movie or meeting in the neighborhood.

What imparts a better sense of the Haight Ashbury just after World War II than the photograph above? The theater sign tells you where you are. One of the last runs of the 7 streetcar line, along with a few automobiles of the period and the woman on foot, tells you how you get there. The woman may have just left Metz Superior Doughnuts after having coffee with a friend. Jay L. Macfarlane not only ran the paint and hardware store next door, he also lived around the corner on Page Street with his wife Sigrid. The tall window above his storefront let light into the Park Masonic Hall, a meeting place for neighborhood groups and the Haight Ashbury Merchants Improvement Association.

The counter-culture and hippie movement did its own placemaking using the same mix of storefronts, flats, and public spaces. During the 1967 Summer of Love, fifty years ago this year, the Haight Theater became the Straight Theater and a home to concerts, “happenings,” and consciousness-raising lectures. Love quickly gave way to a seedier time in the neighborhood, and after many arguments on the Haight/Straight Theater’s future, it was demolished in 1979. A drug store was built on the site, before that burned in 1988.

A strip of housing over storefronts, built in 1992 and 2004, occupy the space where the theater, donut shop, hardware store, and Masonic hall once stood. The block is lively with a Goodwill thrift store, a café, a shoe store, and a small branch of Wells Fargo bank. Placemaking doesn’t need to be forced here, but the bank gives a nod to imagery that resonates with those who love city life. A collage of historical neighborhood images decorates the bank entrance and prominently featured are streetcars and the old Haight Theater. 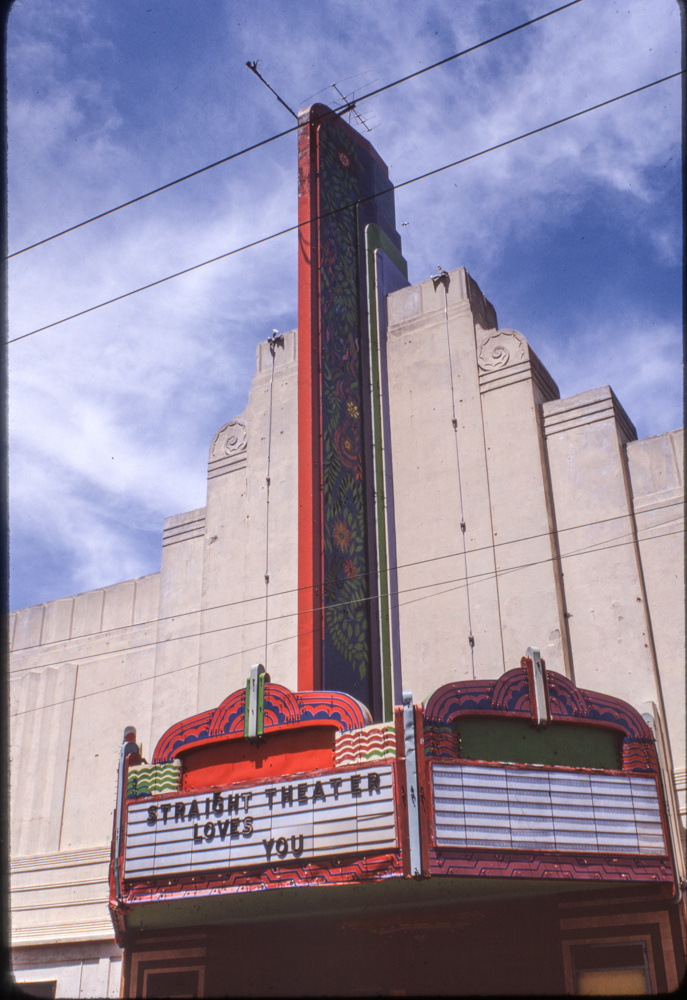 Straight Theater, formerly the Haight Theater, reincarnated for the Summer of Love in July 1967. (wnp25.2421, courtesy of a private collector).