Retired National Park Service ranger John Martini shares some information about one of his favorite images. John is a volunteer helping us process the OpenSFHistory collection. His excellent book on Sutro Baths is available on outsidelands.org 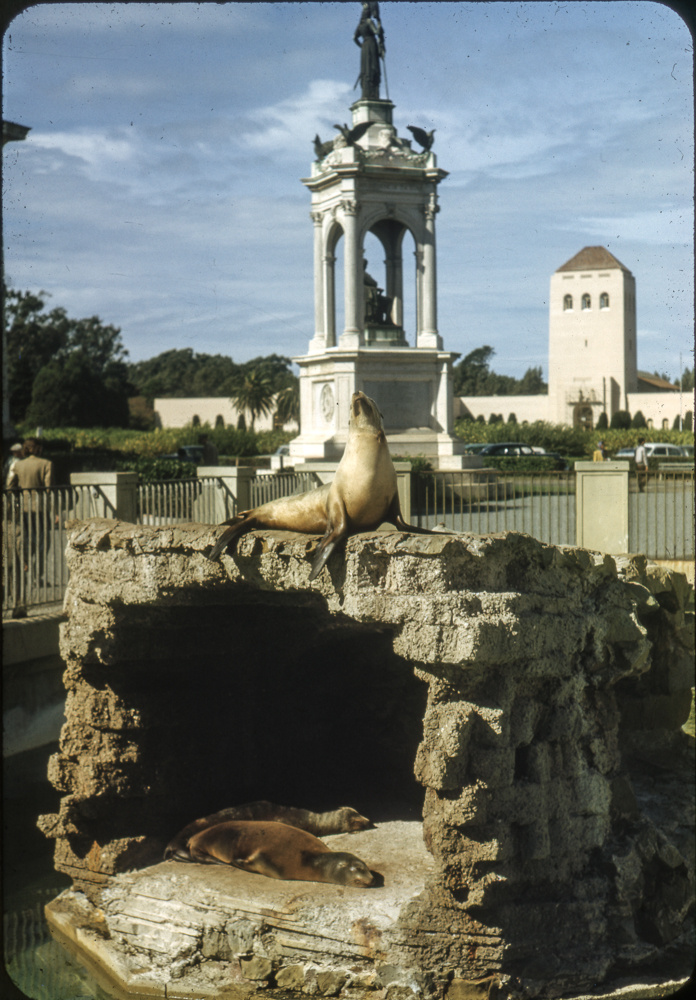 Academy of Sciences’ sea lion grotto, with the Francis Scott Key Monument, and de Young Museum behind, circa 1950, (wnp25.1335, courtesy of a private collector).

The above image, a scan of a color slide taken in Golden Gate Park in 1950, shows a somewhat disorienting landscape of the “old” de Young Museum, the Francis Scott Key monument, and a trio of sea lions reclining on mock Seal Rocks. Nothing is in its correct location—at least by today’s standards. And the presence of sea lions inside the park is especially jarring.

As it turns out, there actually were sea lions in Golden Gate Park, in the courtyard in front of the Academy of Sciences, to be specific. This wonderful juxtaposition of San Francisco landmarks is the result of the repeated remodeling of the forecourt of the Academy of Sciences and the meanderings of the monument to Francis Scott Key, author of the “Star Spangled Banner.”

Some background: the Academy of Sciences was built in sections starting in 1916. First constructed was the North American Hall of Birds and Mammals, followed by the Steinhart Aquarium in 1923. Contemporaneous with the Aquarium’s opening, a trio of “seal and sea lion pools” were built directly in front of its main entrance. According to the Academy of Sciences website, “During the first years the Aquarium was open, the pools housed California Sea Lions, Steller Sea Lions, Fur Seals, and Harbor Seals.”

As the Academy continued to grow, the seal/sea lion pools ended up in the middle of a U-shaped court yard bounded by more science buildings: the Simson African Hall with its dioramas of big game was completed in 1936, followed by the Morrison Planetarium in 1951, and the Science Hall in 1952. How well the pinnipeds fared in these tiny pools isn’t recorded, nor how long the grottoes served as outdoor exhibits. In fact, the 1950 color photo is the only documentation I’ve found that the pools actually remained in use for more than a few years.

(This author remembers looking into the empty pits as a small child in the mid-1950s, and being told by his font-of-all-knowledge Auntie that the pools had also once housed otters.)

As for the Francis Scott Key monument, older San Franciscans will remember that the monument also once sat in the forecourt of the Academy. Actually, this was its second location. When dedicated in 1888, the monument was originally located across from the Conservatory of Flowers. When that area was redeveloped as tennis courts in the 1920s, Francis and his marble monument were moved to near the new sea lion pools, as shown on the construction photo below. 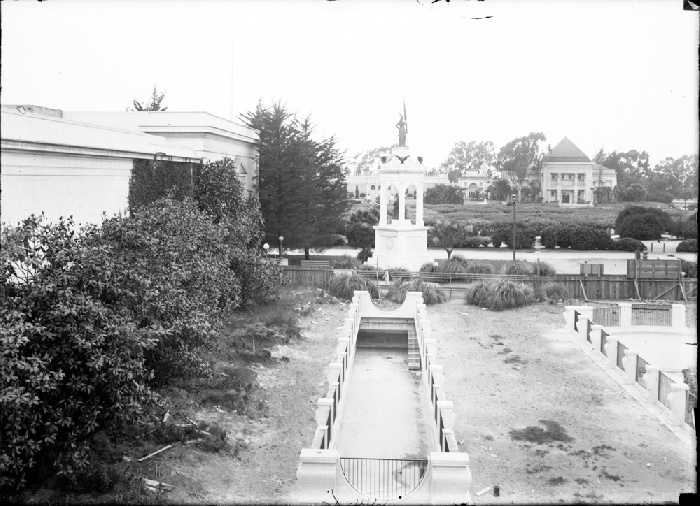 Sea Lion pools and Francis Scott Key monument circa 1923. The original de Young Museum building, a relic of the 1894 Midwinter Fair, is in the background. (wnp15.164, courtesy of a private collector.)

During the late 1950s, the courtyard was redesigned and the sea lion pools removed. In their place, a granite statue of two intertwined pilot whales was installed, surrounded by a circular fountain and bench. Originally displayed at the 1939–1940 Golden Gate International Exposition on Treasure Island, the much-loved whales were relocated to the front of the Steinhart Aquarium in March 1958, where they became a welcoming symbol to the thousands of grammar school children who annually visited the Academy on school trips.

In 1967, the Francis Scott Key monument had to be removed to make way for the final structure in the Academy of Sciences campus, Cowell Hall, dedicated in 1969. The monument ended up in storage for nearly ten years until it was re-erected in its present location at the east end of the Music Concourse.

The Academy of Sciences complex suffered extensive damage during the 1989 Loma Prieta Earthquake, and some of the exhibits had to be closed to the public. As plans were being made to rehabilitate the aging buildings to bring them up to modern code, it was decided to demolish the old complex and build a state-of-the-art Academy instead. Construction of the new $500 million Academy of Sciences began in 2005, and it reopened in its present form in September 2008. The pilot whales, unfortunately, were nowhere to be seen. 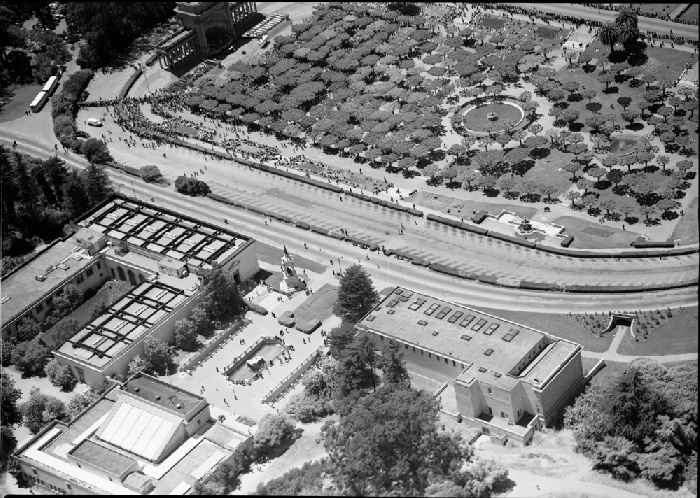 This 1948 aerial photo clearly shows the sea lion pools, Francis Scott Key monument, and arrangement of the Academy of Sciences buildings. The reason for the off-center location of the Key monument in the courtyard is not known. (wnp14.2451, courtesy of a private collector.)